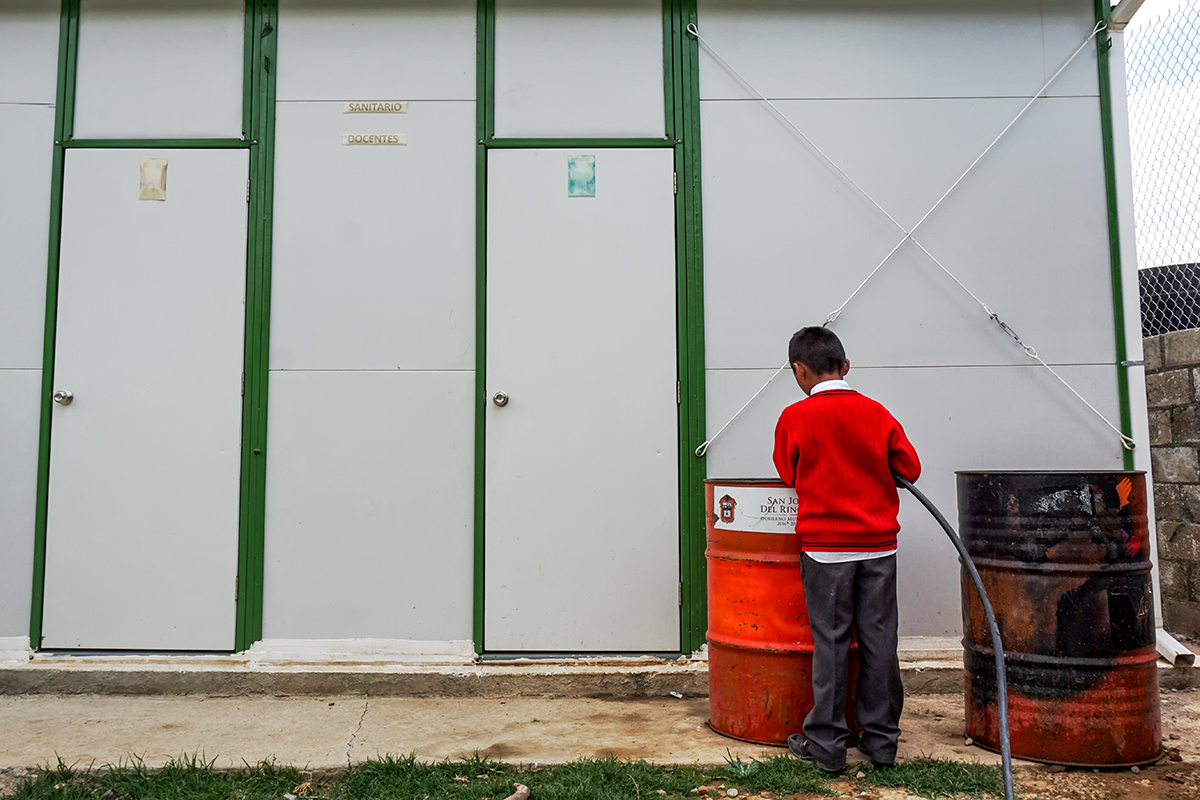 She goes home twice a day to use the bathroom, because her school lacks running water.

“The problem is that there’s no water there, and it smells very bad,” says Cruz, referring to the restrooms at Miguel Hidalgo y Costilla, an elementary school in the rural town of Barrio El 44 Pueblo Nuevo, where she is in the sixth grade.

New bathrooms were built at the school in 2017 by the Integrated Educational Services for the State of Mexico, a public body in charge of basic education in the state of Mexico. But the bathrooms weren’t connected during construction to the town’s water supply, says Ernesto Flores Martínez, the school’s principal.

The new bathrooms turned out to be useless for all 71 students – children between 6 and 12 years of age – and their three teachers.

In lieu of running water, students and teachers collect water in four containers to wash hands and flush toilets in the bathroom. But sometimes there isn’t enough water, so the toilets remain dirty for days at a time.

Many schools in Mexico don’t have access to running water every day, and some don’t have it at all. A lack of infrastructure connecting school bathrooms to local networks is one reason. But advocates and educators say the problem is complex. 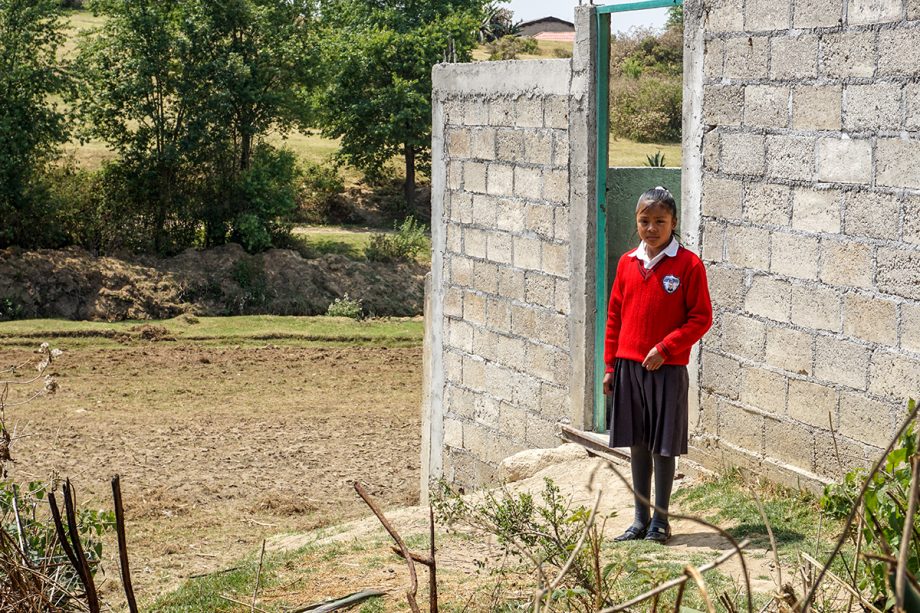 Suritzel de Jesús Cruz, 11, says she is lucky to live close to Miguel Hidalgo y Costilla primary school, so she can go home to use the bathroom during the school day.

Across the country, there are more than 5,600 schools described as “multi-grade indigenous” schools, 14.8 percent of which didn’t have water available during the school day on a daily basis in 2014, according to a school performance and operations assessment conducted that year by the public agency in charge of assessing the country’s education quality. While those are the most recent statistics available, experts say the situation hasn’t changed much.

Discrepancies in water access do have a pattern here. A lack of water in schools is more common in rural schools and in small schools with fewer than 100 students. Lack of water access is most common in the elementary schools described as multi-grade indigenous, where most students belong to groups that predate Europeans’ arrival in Mexico, the study found.

But the roots of the problem are complex, says Saúl Kenji Pío Robles Ramírez, participation coordinator of the Safe Water in Schools program at the Fundación Cántaro Azul, a civic organization that offers a program mainly in rural schools to provide safe water for consumption and sanitation. A local water system could be inadequate, water supply could be intermittent, or a school’s infrastructure could be lacking or incorrectly installed, he says.

Robles Ramírez says that conversations about water access in schools too often center on schools investing in flush systems.

“But the fact that water supply doesn’t come easy for the communities isn’t taken into account,” he says. 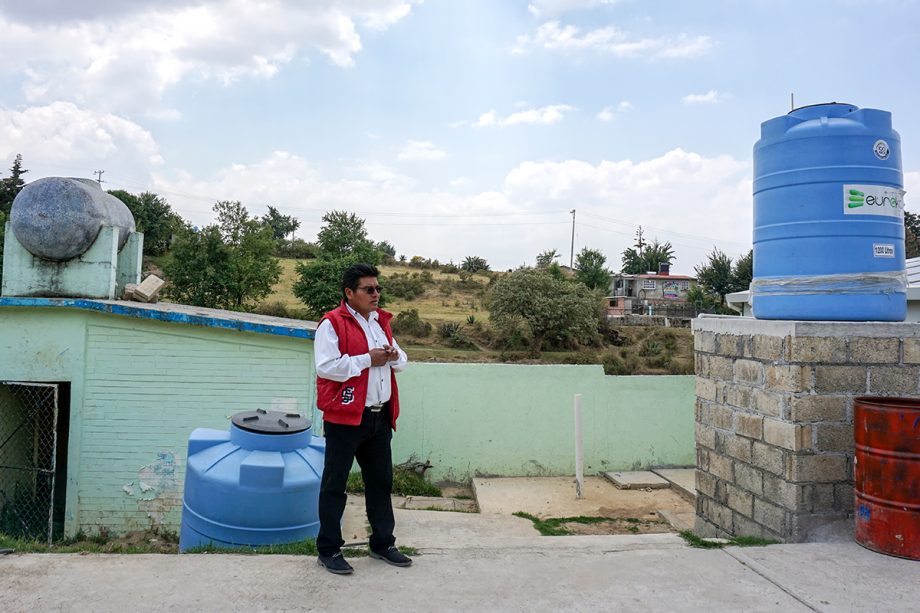 Ernesto Flores Martínez, the school’s principal, says access to water would improve if the school paid to tap into a local reservoir. But he’s hesitant to pass on yet another cost to parents.

In many cases, the problem is not a lack of infrastructure but supply deficiencies, says Sergio Alfonso Martínez González, a professor at the Environmental Engineering Laboratory within a branch of the National Autonomous University of Mexico. He was part of a team evaluating the schools’ water shortages.

He says more resources need to be committed to investigating the root causes of lack of water access, before investing in new bathrooms; for instance, at the primary school Miguel Hidalgo y Costilla, water comes from a hose connected to a nearby reservoir. The school does not pay for the service, which is why it is intermittent.

If the school paid for it, the supply would likely improve, says Flores Martínez, the principal. But that’s not an easy solution.

The school has no extra money, so costs would have to be passed on to the parents, who already pay the school’s electricity bills.

“That would be yet another expense for our family,” says Margarita Reyes, 45, a mother of two students who also works at the school cafeteria.

While her family – and most of the families who send their kids to school there – struggle to make ends meet, the lack of water at school affects the children’s education, she says.

“I’d like to be able to use the bathroom, flush the toilet and wash my hands,” says her daughter, María José Luciano Reyes, 9, a fourth-grade student.

Her mother says she wouldn’t mind paying a small amount, if that meant the children would have water.