MUTARE, ZIMBABWE — Precious Dinha elbows her way into a packed soccer stadium. Despite thunderclouds looming above, thousands of yellow-clad Zimbabweans are singing, dancing and thrusting their index fingers skyward. They wave placards in Shona and English saying, “We need democracy in Zimbabwe” and “Police stop brutality against citizens.” Dinha unfurls her own large white banner: “We want free and fair elections.”

Soon Zimbabwe’s leading opposition presidential candidate, 44-year-old Nelson Chamisa, bounds onto a stage. “Do you embrace the new?” he asks. “Yes!” the crowd shouts. Dinha traveled close to four hours from Harare, the capital, to hear Chamisa speak. She attends every Chamisa rally she can, wearing yellow, the color of his movement, and reveling in the festive atmosphere. This event marks the formal introduction of his new political party, Citizens Coalition for Change (CCC), in eastern Zimbabwe ahead of next year’s presidential election.

Dinha, 32, believes Chamisa’s relative youth and outsider perspective can help resuscitate Zimbabwe’s listless economy, with high levels of unemployment, inflation and food insecurity. “I have never been employed despite having professional qualifications. I do not even know what a pay slip looks like,” Dinha says. She was trained as a human resources manager but raises chickens and sells secondhand clothes to get by. “He understands us as youths, and there are promises of reviving the economy so that we can also have jobs.”

Despite his supporters’ fervency, Chamisa faces a tough road to the presidency. In 2018, he lost a bid to wrest control from the Zimbabwe African National Union-Patriotic Front (ZANU-PF), the ruling party since 1980, in an election whose fairness an international election monitoring team questioned. But in the years since, other southern African opposition leaders have found success in copying the Chamisa playbook: targeting young, social media-savvy voters fed up with entrenched parties and alleged corruption.

Chamisa supporters believe recent upstart victories in Malawi and Zambia could foreshadow his own. “2022 is the year when change in Zimbabwe was authored by God,” he tells the rally crowd. “No one can stop an idea whose time has come.”

With little public polling in Zimbabwe, it’s hard to assess his chances. Mike Bimha, ZANU-PF’s secretary for commissariat, dismisses Chamisa as an electoral threat. “It is still an opposition which came out of forces from outside Zimbabwe who want a regime change,” Bimha says. 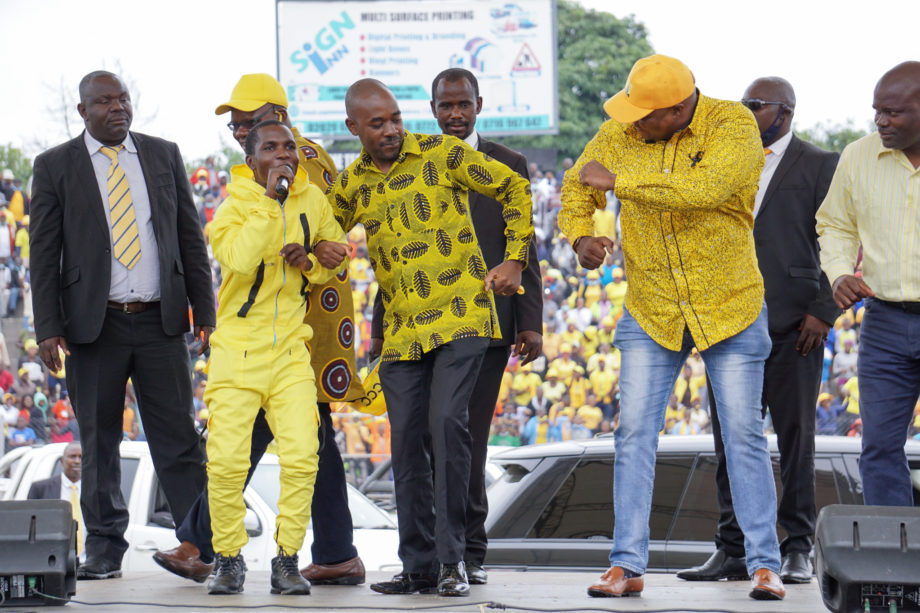 Chamisa stumbled into the political spotlight. In 2018, Zimbabweans had just witnessed the ouster of their longtime leader, Robert Mugabe, in a military coup. As the new president, Emmerson Mnangagwa vowed to modernize the health care system, repair crumbling infrastructure and rebuild frayed business ties with Europe. He expected to face the popular opposition candidate Morgan Tsvangirai in that July’s presidential election, but just months before the vote, Tsvangirai died of complications related to cancer. Chamisa stepped in.

A former student activist and member of Parliament, Chamisa found ways to sidestep government-controlled media outlets and drum up support. He electrified crowds around the country with rallies that enhanced his name recognition and built community among his backers, and wooed voters directly on social media. (He now has 1 million Twitter followers.)

Nevertheless, Zimbabwe’s first post-Mugabe election ended in turmoil, with vote-rigging allegations and protests where security forces fired into crowds and several people died. The Zimbabwe Electoral Commission — long criticized by opposition parties as an arm of ZANU-PF — eventually declared Mnangagwa the winner with 50.8% of the vote. Afterward, the Zimbabwe International Election Observation Mission, a group of international election observers, denounced the process, saying Zimbabwe lacked “a tolerant, democratic culture” where “parties are treated equitably and citizens can cast their vote freely.” A Zimbabwe Electoral Commission spokesperson didn’t respond to requests for comment. Bimha, the ZANU-PF official, says, “We want free and fair elections, harmony, love and collaboration, and that is a party position.”

Elsewhere in the region, many voters shared the frustrations of Chamisa supporters, says political analyst Onai Moyo, believing that the leaders who freed their countries from colonialism had subsequently failed at governing. In 2020, Lazarus Chakwera won the presidency in Malawi. In 2021, Hakainde Hichilema clinched victory in Zambia. Both opposition candidates rallied voters with a Chamisa-esque message of African renaissance. Their argument: The ruling class had fallen prey to corruption, leaving the continent poor and underdeveloped despite its vast natural resources. 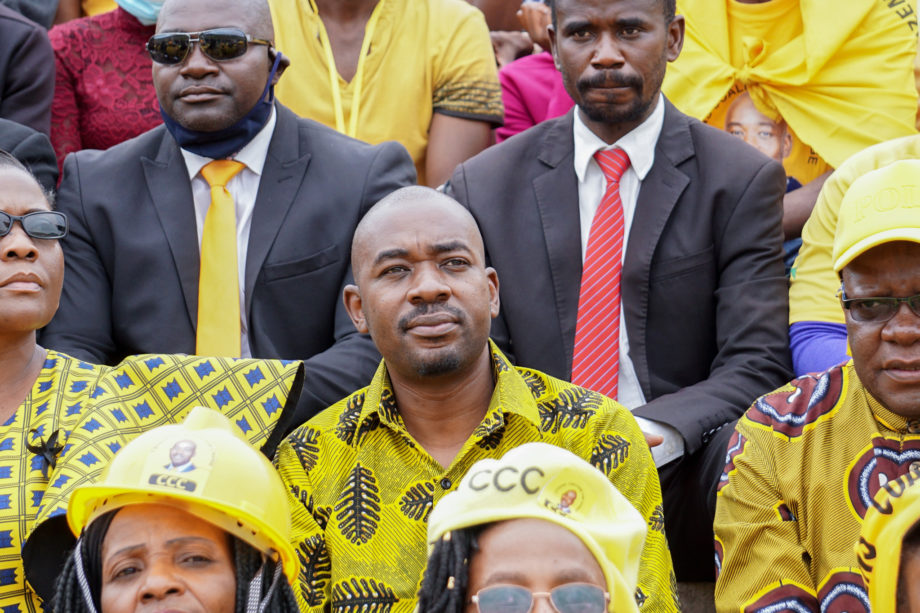 Before addressing supporters, Nelson Chamisa, center, waits amid the crowd. He is the leading opposition candidate in next year’s presidential election.

In Zimbabwe, that message has gained traction even with older voters. Cresencia Chabuka, 61, was a senator with Chamisa’s old political coalition, the Movement for Democratic Change Alliance. She joined Chamisa’s new party, she says, because pensioners like her are suffering from poverty as hyperinflation erodes their savings. At the soccer stadium rally, she flits through the crowd, trying to convince her peers that Chamisa is the solution. “A lot of senior citizens have lost faith in ZANU promises,” she says.

Even so, there are key differences between Zimbabwe and its neighbors. For example, since liberation in the 1960s, Zambians have chosen four different political parties to run the country. Each ruled for many years, but the periodic change in leadership meant Zambia’s election system wasn’t intertwined with a single party, Moyo says. In Zimbabwe, one party — and mainly one man — was in charge.

ZANU-PF was instrumental in overthrowing white-minority rule in the 1970s, a campaign that was bloodier than in either Zambia or Malawi. “Zimbabwe’s independence came through a liberation struggle,” says political analyst Alexander Rusero. “It came at the bedrock of massive violence of several forms, coupled with inflicting pain and fear in the masses.” To party loyalists, ZANU-PF has earned the right to lead Zimbabwe. “Nyika inotongwa nevene vayo,” they say in Shona — only the liberators can rule.

Even voters fed up with the ruling class may not rally for Chamisa. Tendai, 47, who asked to be identified only by his first name because of Zimbabwe’s history of political violence, lives in Mutare and scrapes by on gardening jobs. He voted for ZANU-PF in 2018, hoping for an economic revival that never arrived. While he’s lost faith in Mnangagwa, he doesn’t view Chamisa as a viable alternative. “Once you vote them into power, they serve self-interests and forget us,” Tendai says. He plans to stay home instead of voting. 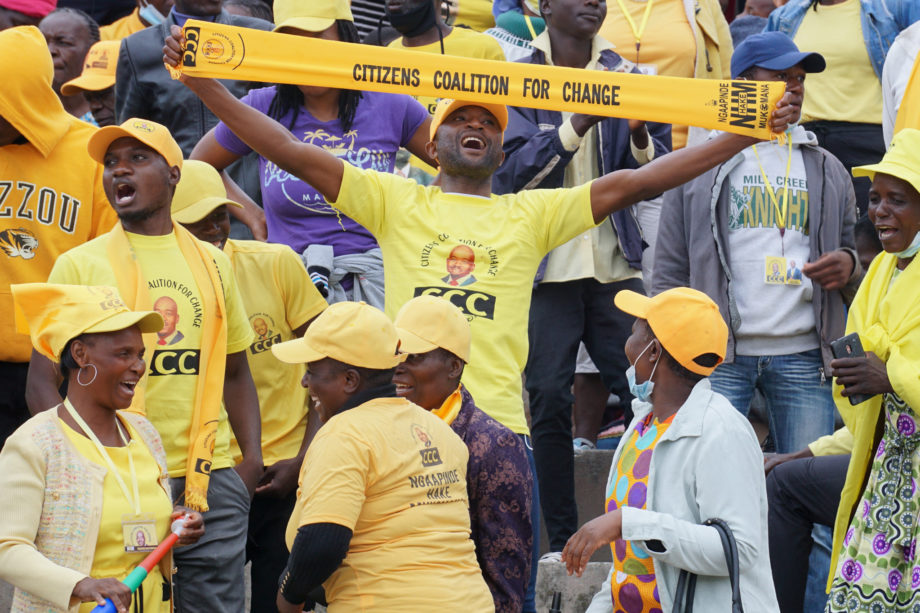 This March, Zimbabwe held elections for various parliamentary and council seats. They did not bode well for Chamisa’s party. Before the vote, Vice President Constantino Chiwenga vowed that ZANU-PF would defeat CCC — something he compared to crushing lice. The next day, a Chamisa supporter was fatally stabbed at a rally. Though Chamisa’s party won a majority of contested seats, most were already in the hands of opposition candidates; ZANU-PF even recovered two seats it had lost in previous contests.

Chamisa often promises electoral reforms in his speeches, but his allies don’t have the numbers in Parliament to make changes before the next election. “We are likely to have history repeating itself when it comes to violence,” Rusero says. “I also don’t see the elections bringing the much-needed change, instead worsening the situation and deepening the divide that exists among Zimbabweans.”

At the soccer stadium rally, Dinha is more optimistic. A devout Christian, she sees Chamisa as a Moses-like figure, tasked with leading Zimbabwe to a political promised land. All around her, supporters sweat out the three-hour rally; some had climbed trees outside the stadium to get a better glimpse of the candidate. Others raise placards saying, “ngaapinde hake mukomana” — let the boy rule.