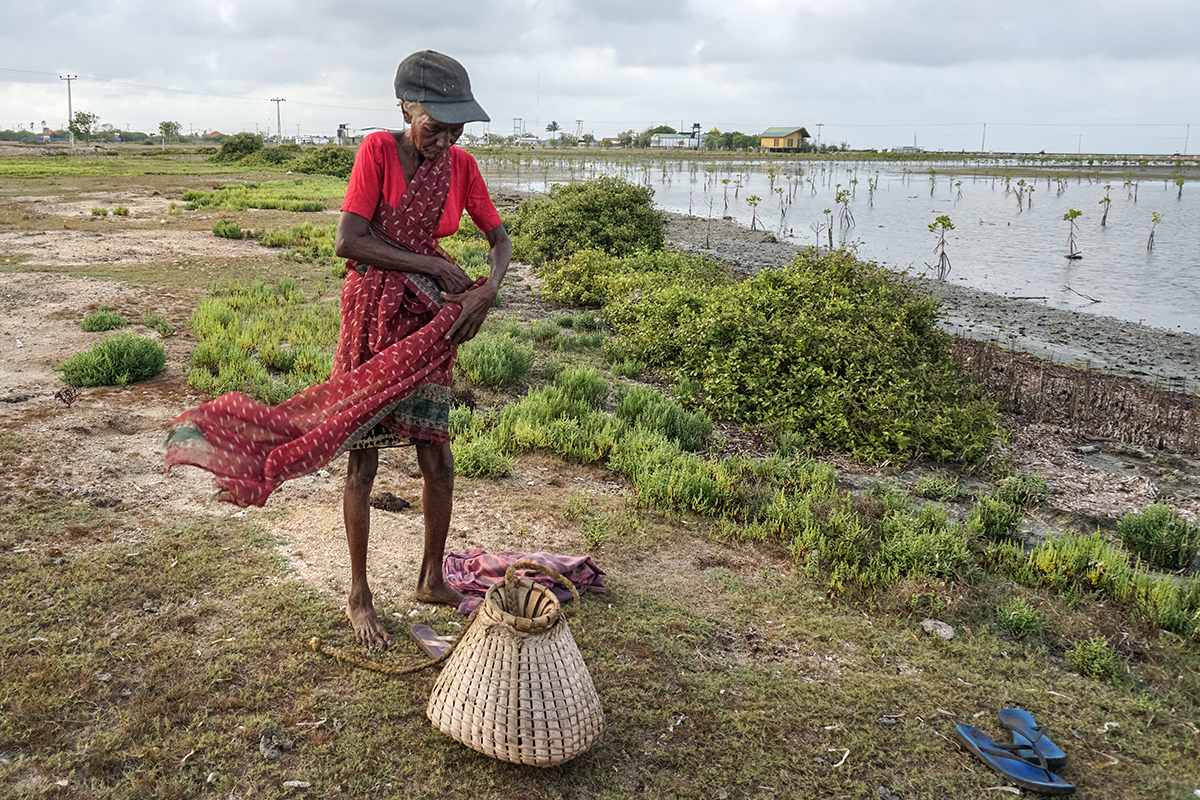 JAFFNA, SRI LANKA — Rasathurai Sarojathevi rises before the sun each morning and moves like a shadow throughout her home, careful not to make any noise that would wake her two children.

She prepares her food in a hurry and hustles out the door, unable to spend time with her family before she goes to work – the grueling work she’s been doing for 33 years.

Sarojathevi is engaged in the fishing industry, along with 20 other women from her village, Ponnalai. Fishing is a job usually done only by men here. While Sarojathevi and her cohort make enough money from their catches to provide the essentials for their families, they don’t earn enough to buy the expensive fishing equipment that would make the job easier.

They catch fish with their bare hands.

“Sometimes, during the rainy season, there are times that we catch fish with water up to our necks,” she says.

That’s not the only challenge.

Kawwatty is a type of rock that grows under the sea and “it is sharp as a sword,” she says. “If we step on it, it cuts our feet very deeply. It is painful – as if you are dying. We do not go to the hospital. We come home, we grind red chilies and apply it on the [wound] and stitch with the needle that is used to stitch clothes.”

The same goes for crab bites. If the women go to the hospital for the injuries that they incur on the job, they might have to stay several days and miss work.

“Because of this, we treat ourselves,” Sarojathevi says.

Historically, it’s been unusual for women to do this work. In other districts of the country, women don’t fish professionally. But in this part of Sri Lanka, where many women are tasked with providing for their families because their male partners are missing, have died or were injured in war, Sarojathevi has emerged as an entrepreneurial leader for other women in her community. 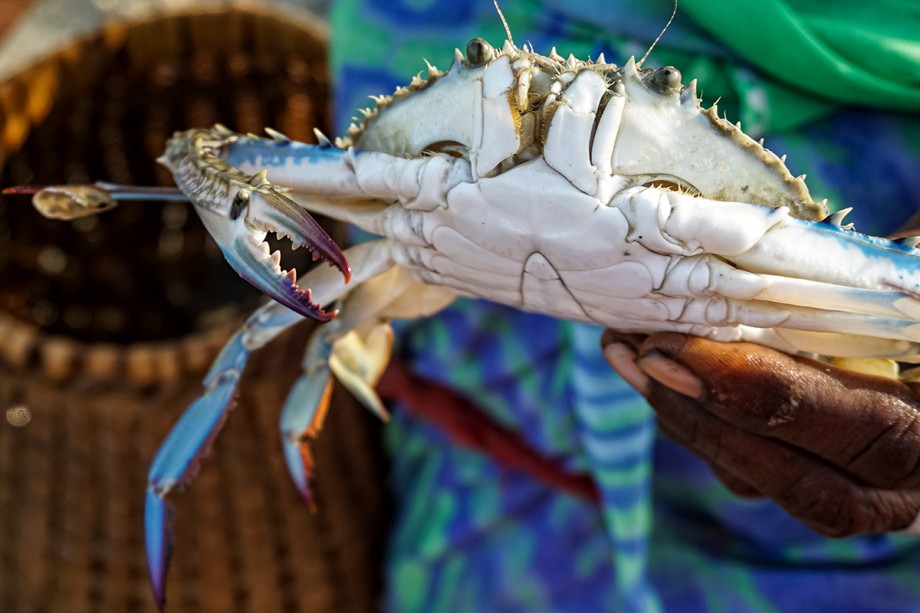 Local women do not typically work in the fishing industry in Sri Lanka. Learning to catch crab with their bare hands has proven lucrative for many women who lost their husbands during the war.

Sarojathevi says she has the spirit of the work in her blood: Her mother fished, too.

“Since my father was not well, and his earnings were not enough, my mother used to go fishing. I stopped my education at the age of 12 and went with my mother,” she says.

Even when the rains don’t cooperate and fishing isn’t possible, as has been the case in recent weeks, local women find other types of work to support their families. Since the end of the nearly 26-year civil war, new data shows a growing number of female-led households here. According to 2016 government data, 21 percent of households in the Jaffna district are headed by women.

Sarojathevi says her story is reminiscent of many other women here. In 1985, she was enjoying her morning tea when she heard gunshots. Her husband was caught in crossfire and was shot in the foot, an injury that still impacts his ability to work.

“We did not have food [even] once a day,” Sarojathevi says. “I suffered very much with the two children.” 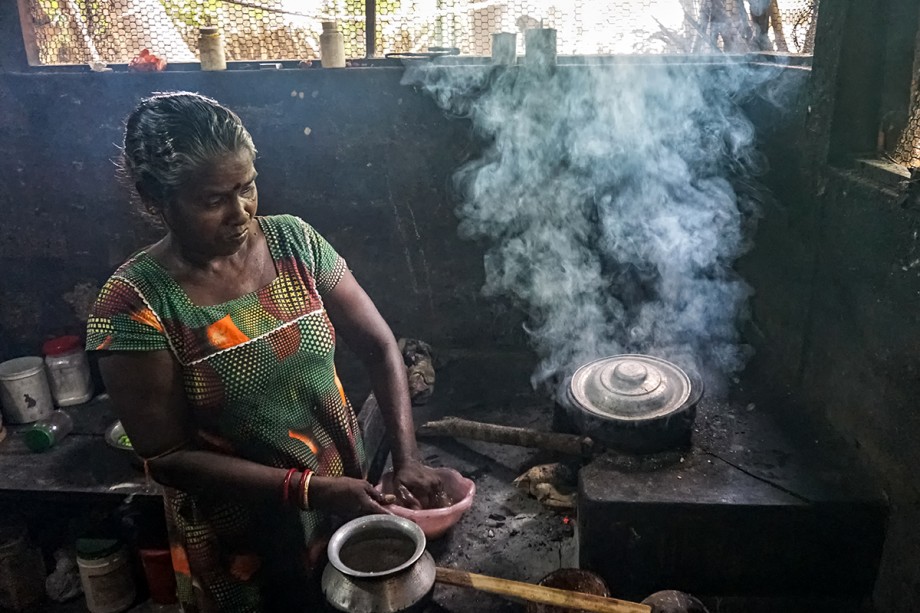 In November when water levels were too high and winds were too strong to fish, local women, like Rasathurai Sarojathevi, put their fishing poles aside and took jobs cooking and cleaning in local homes.

So she took up a job she already knew and has been fishing for the last 33 years.

But, as water levels fluctuate during the seasons, her income is affected, she says.

In the summer, when water levels are lower, there are fewer fish, so incomes decrease, too. Sarojathevi says she and the other women make just 200 to 500 rupees ($1.17 to $2.92) per day. But, come November, water levels rise, and higher-value catches, including crab, become abundant. At this time of year, daily incomes can exceed 1,500 rupees ($9) per day.

They take their daily catches to a marketplace for auction, where middlemen buy their seafood. If their catches don’t sell at the market, the women sell it door to door around the village. 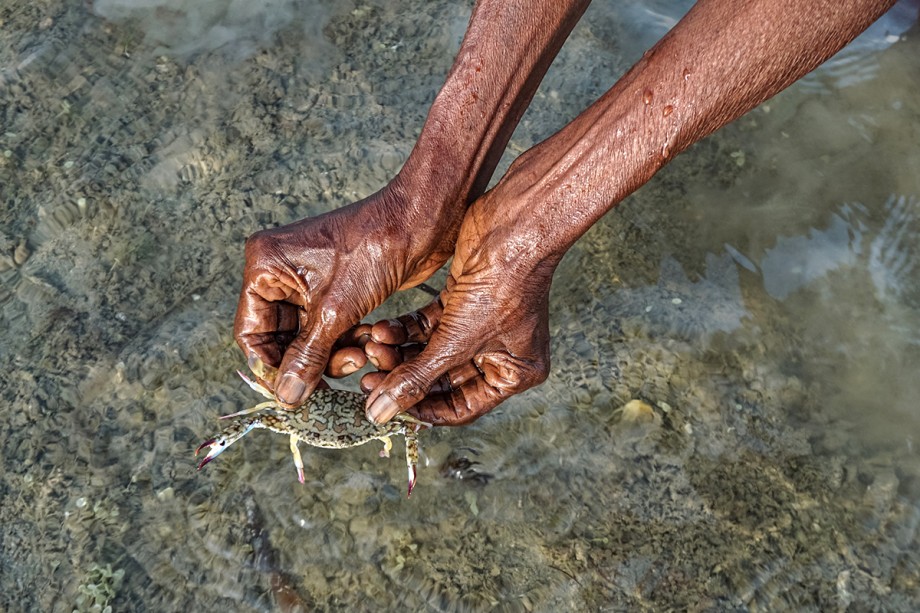 Crab small and large are abundant here in November and December, allowing local female fishers to earn as much as $9 per day.

Sinnaththampi Neeladsi, a woman from Ponnalai who fishes with Sarojathevi, says women use different fishing strategies than do the men. Sometimes, when conditions are difficult, they fish as a group, with two women holding a net in the water while others churn up the water with their hands to drive fish into the net.

“We catch them with our bare hands and put them into the basket that we have tied to our waists,” she says. “We take whatever we need for each family and sell the remaining together, and Sarojathevi divides the money equally to us.”

Neeladsi says she was anxious about how she would support her family after her husband died.

“Sarojathevi’s effort in the fishing industry encouraged me,” she says.