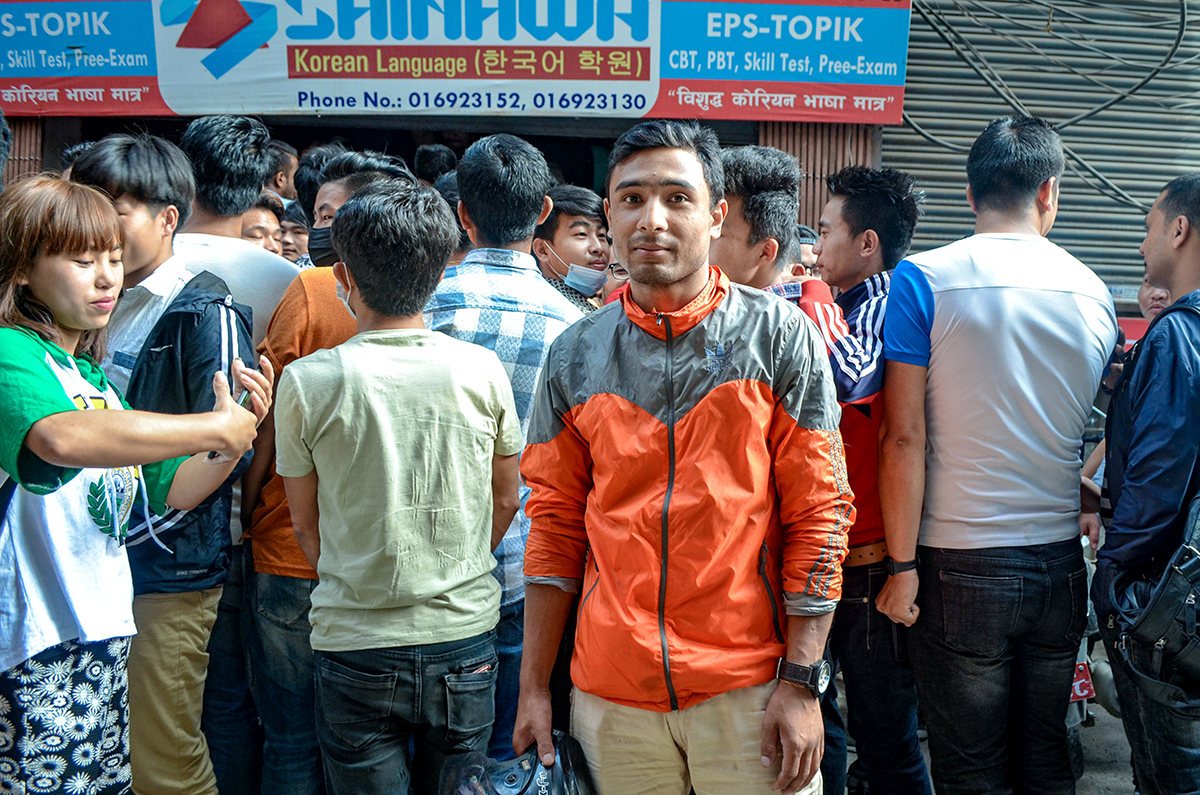 KATHMANDU, NEPAL — Rabindra Thapa, 23, had been studying the Korean language for six months when he told friends that they all needed to work harder.

“We should do better in the final exam,” he says.

Thapa has a bachelor’s degree, but he says he doesn’t earn enough money at the stationery shop where he’s worked for the past two years. With a monthly income between 10,000 and 15,000 Nepalese rupees ($85 to $127), he says, he can’t even afford to rent his own basic apartment in Nepal’s capital of Kathmandu, where he’d likely have to pay 20,000 rupees ($170) per month.

But now, he hopes that his Korean studies will open a new opportunity for him in South Korea. For many young Nepalese men, that country is fast becoming the preferred destination for working abroad. For years, Nepal has been a major source of migrant workers for jobs in the Persian Gulf region and in Malaysia, among other places. But as stories have spread about the abuse that many migrant workers face in those countries, South Korea is becoming a preferred option.

The cost to go to South Korea is low, Thapa says, and the potential benefits are good. Nepalese workers tend to get jobs in manufacturing, agriculture and fishing, sectors the South Korean government has specifically opened to migrant workers. 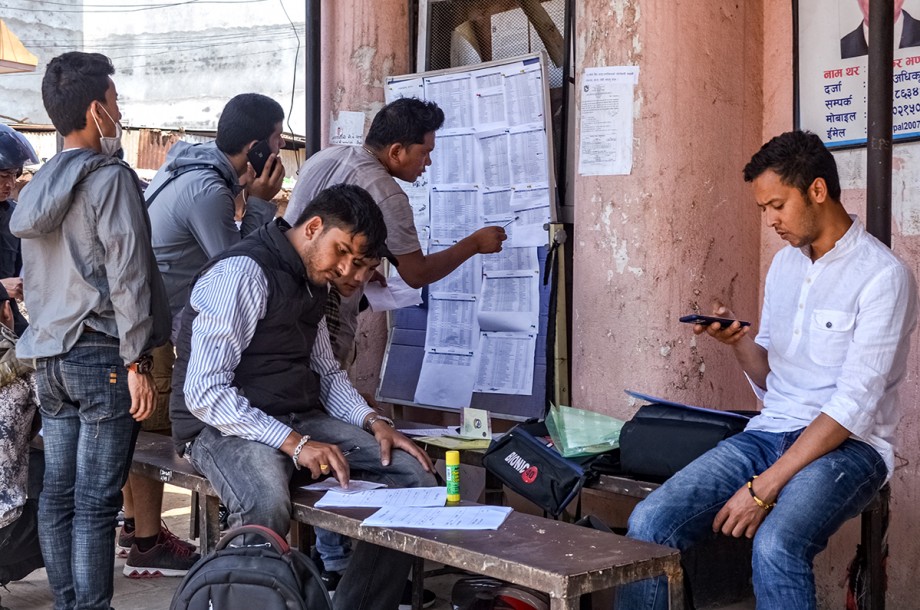 Men who hope to work in South Korea gather in Kathmandu, Nepal’s capital, to participate in government programs that teach the Korean language and match workers with employers in that country.

Each step of the process to finding work in South Korea – from applying for the language test to getting a job in the country – is managed by the Nepalese government through the South Korean government’s Employment Permit System (EPS). The two countries signed a formal agreement in 2007 on the program, which began accepting Nepalese workers in 2008.

Since then, about 850,000 Nepalese people have applied to take the Korean language test, Khanal says. Of those, about 61,000 people filed job applications, and about 53,000 people have gone to South Korea to work on contracts that last for four years and 10 months, according to data kept by Khanal’s office. People between the ages of 18 and 39 are eligible to apply for the program.

For 2019, the South Korean government has a quota of 7,100 jobs for Nepalese workers, according to data kept by Khanal’s office. That’s a very small percentage of the estimated hundreds of thousands of Nepalese people – more than 380,000 work permits were issued in the 2016-17 fiscal year alone – who have jobs in foreign countries, but those in South Korea reportedly have a significantly different experience than those who are in the Persian Gulf region. There, many workers are trapped into forced labor when their employers confiscate their passports. Often, the pay isn’t as promised. (Read our coverage of this issue here.)

Khanal says he’s confident that people who work abroad under the EPS program won’t be exploited, because the application and job matching processes are closely managed.

Bishnu Neupane, 30, went to South Korea in 2012, three years before his family’s home in rural Nepal was destroyed in a major earthquake. Neupane says he sent 7 million rupees ($59,470) home to Nepal during his nearly five-year contract in South Korea. His elder brother also took a job there, and the two men ultimately saved enough money to buy a new home for the seven members of their family in Kathmandu.

“How could we have earned this money if we had not gone to Korea?” he asks. “Buying a house in Kathmandu was a dream for us.”

Now, Neupane says, he can’t find a good job in Kathmandu, so he’s planning to take another contract in South Korea. 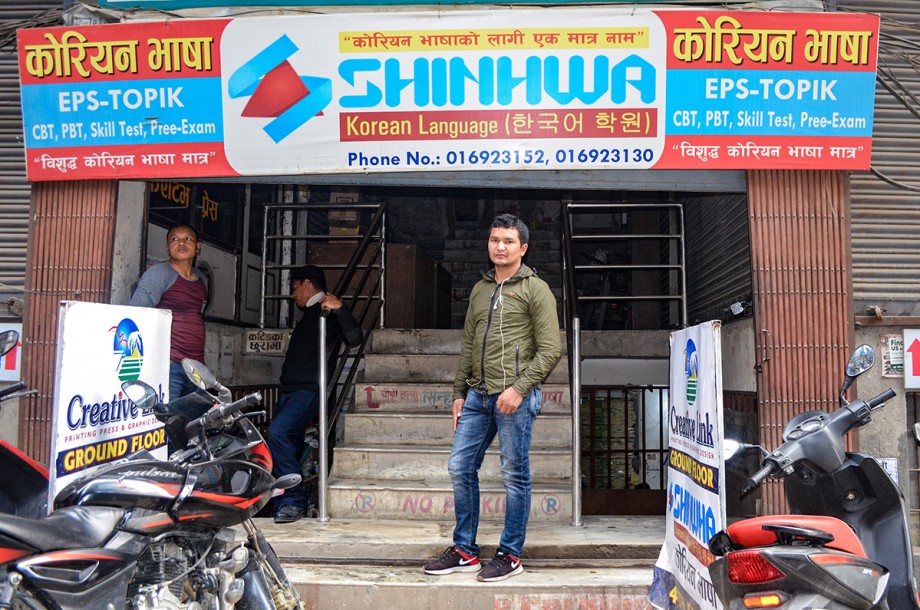 Bikram Bahadur Phuyal, 25, has a bachelor’s degree but doesn’t see a future for himself in Nepal. He and 14 of his friends came to Kathmandu from another area of Nepal so they could study for a Korean language exam together and eventually work in South Korea.

The lack of good jobs in Nepal is a problem for many of the workers who return from South Korea, says Lal Prasad Bhattarai, who leads Ankur Nepal, an organization established by migrant returnees from South Korea.

About 25,000 Nepalese have returned from South Korea, Bhattarai says – fewer than half of the 53,000 people who have gone. While many of the other Nepalese migrant workers are likely still under contract, an estimated 15,000 Nepalese have overstayed their work contracts or remained in South Korea after a three-year training program that occurred before the EPS system formally began in 2008, he says.

There are few opportunities for success in Nepal, Bhattarai says.

“Even if you establish a factory here, nobody would be here to offer you [a] guarantee of finding a market for your production,” he says.

Skilled workers with college degrees make up the majority of those who go to South Korea for work, says Chandra Mani Adhikari, an economist. But the wave of workers heading to South Korea has left a dearth of workers in Nepal. It’s now common to see migrant workers from India taking jobs in Nepal that were once held primarily by Nepalese people, he says.

The government should create better opportunities for Nepalese people at home, Adhikari says.

Until that happens, Nepalese who hope to improve their families’ lives are choosing to leave their homes.

Bikram Bahadur Phuyal, 25, says he came with a group of 14 of his friends from Nepal’s Butwal area to Kathmandu to take Korean language courses. They each paid 20,000 rupees ($170) for tuition.

Phuyal says he has a bachelor’s degree, but he doesn’t see a future for himself in Nepal.

“The financial condition of my father and mother is very weak,” he says. “I need a good job. It’s very hard in Nepal to make a living, no matter how hard you work.”