DALANZADGAD, UMNUGOVI PROVINCE, MONGOLIA — The scorching sun glares at them from directly above, and everything under their feet is parched, dusty and barren. The sheep and goats squeal and squeak, their nostrils sunken, their eyes glazed. Batbaatar Tsedevsuren, a herder with more than two decades of experience, knows this is how his animals behave when extremely thirsty.

He has walked with his 700 animals for several days in Mongolia’s Gobi desert in search of water and green pastures, when suddenly Batbaatar sees a well, and a fellow herder sitting on its edge. He comes closer with a smile, he later recalls, but the herder doesn’t reciprocate. “There is no water in the well,” the other herder quickly says. Batbaatar knows that isn’t true, and that the herder is just acting stingy. But he can’t afford a fight.

Located in the south of the country, the Gobi desert region has become a site of conflict among herders fighting over access to water. Because of natural and human-made causes — including climate change and mining — water bodies in Umnugovi, Mongolia’s largest province in the desert, are shrinking at an alarming pace. It’s forcing residents to consider whether their traditional nomadic herding lifestyle can survive this shock.

The number of water bodies that dried up in the province increased tenfold in the decade from 2007 to 2018, according to census data from the National Statistics Office of Mongolia. This drying-up brings with it an increase in the frequency of droughts and a shrinking of the region’s pastureland. With low rainfall or no rains at all, some places in the region have become nearly uninhabitable. Gantumur Sugir, a herder in the region’s Gurvantes soum, is one who has decided to move out. Because of a shortage of pastures, and no rains in the soum for three years now, he says it’s impossible for any living being to remain.

Almost everyone in the area has a story to tell of a river they grew up with disappearing or on its way to disappearing. Streaming along the south of this province’s Bayandalai soum is Dalai Bulag — a spring in danger of drying up as its flow decreases each year. “When I was a child, Dalai Bulag was too wide to jump across,” says Ganbold Sumiya, who grew up drinking its water. “Now, the width of the river is so narrow that you can cross it in one step.”

In Gobi — famous for the largest dinosaur fossil reservoir in the world and home to black-tailed gazelles and wild asses — climate change is manifesting itself in ways big and small. According to the “Atlas of Desertification in Mongolia, 2020,” published by the National Agency of Meteorology and Environment, the amount of precipitation during summers has decreased. In fact, the report says there are times when the region doesn’t get any rain at all for years. The number of days with winds and storms has increased, as has the aridity. And the land area affected by desertification has increased significantly. 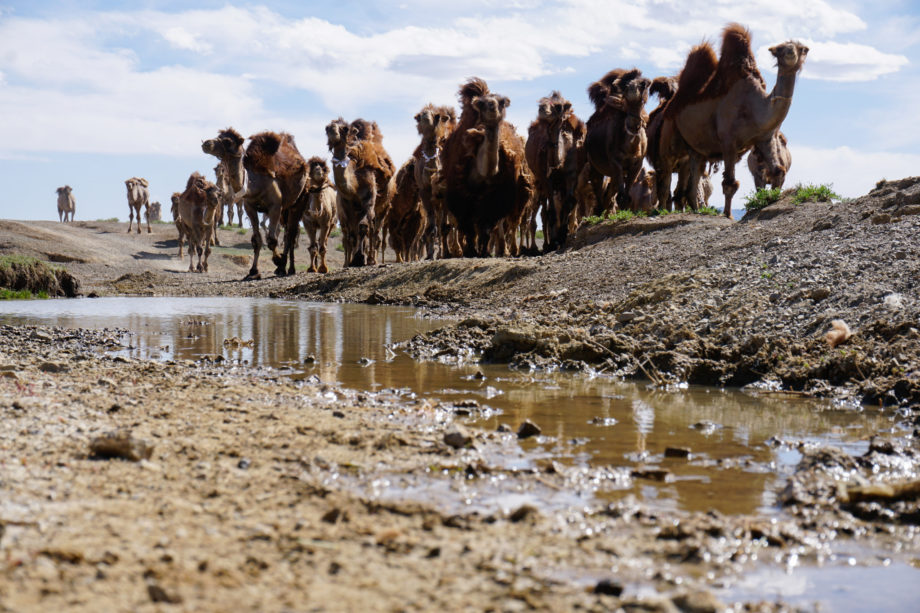 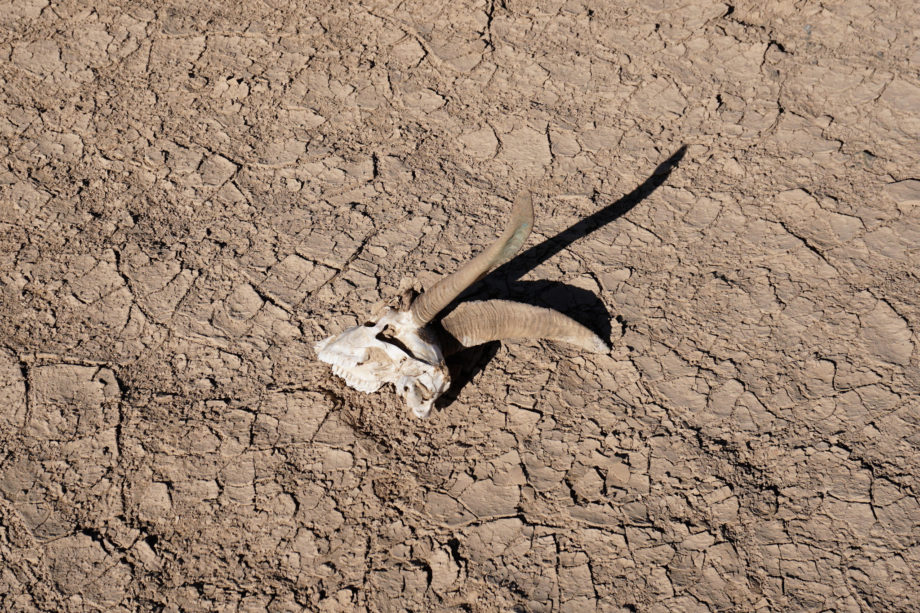 Bactrian camels, also known as Mongolian camels, approach a small stream of water springing up from a well. A sun-bleached goat skull lies on the cracked ground of the Gobi desert.

“It is becoming difficult to herd animals as the rivers keep drying up,” says Bat-Erdene Shinekhuu, head of the province’s Food and Agriculture Department. “Pastures are scarce, water is drying up … The herders have to keep working harder to prevent their animals from dying.”

If this continues, herder Gantumur — who has moved more than 300 kilometers (185 miles) in search of pastures — says “our nomadic heritage of animal husbandry, which is rare in the world, will disappear.”

Traditionally, Mongolia has a nomadic pastoralist culture. Raising livestock is the main driver of its economy, employing 1 in 4 Mongolians, according to an International Monetary Fund report. Since livestock is the main source of livelihood for herders, they have tried to raise more animals to increase their income. Before 1990, when Mongolia transitioned to a free market economy, livestock was managed and tightly controlled by the state. Since privatizing, the number of animals in Mongolia has tripled to 70 million, according to the IMF, and the number has been increasing year by year with no regulatory body to keep it in check.

With nearly 98% of Umnugovi province now moderately or severely affected by desertification and land degradation, livestock herders can’t afford to be sedentary. In normal times, when the rains are adequate, herders move between two and four times a year. Recently, however, the herders have had to move more often because of the scarcity of water. Although there are 5,184 pasture wells, the number of cattle per well is two to three times higher than the standard. A well that once watered 500 animals “is now watering only 200 camels,” says Bat-Erdene, head of the province’s Food and Agriculture Department. 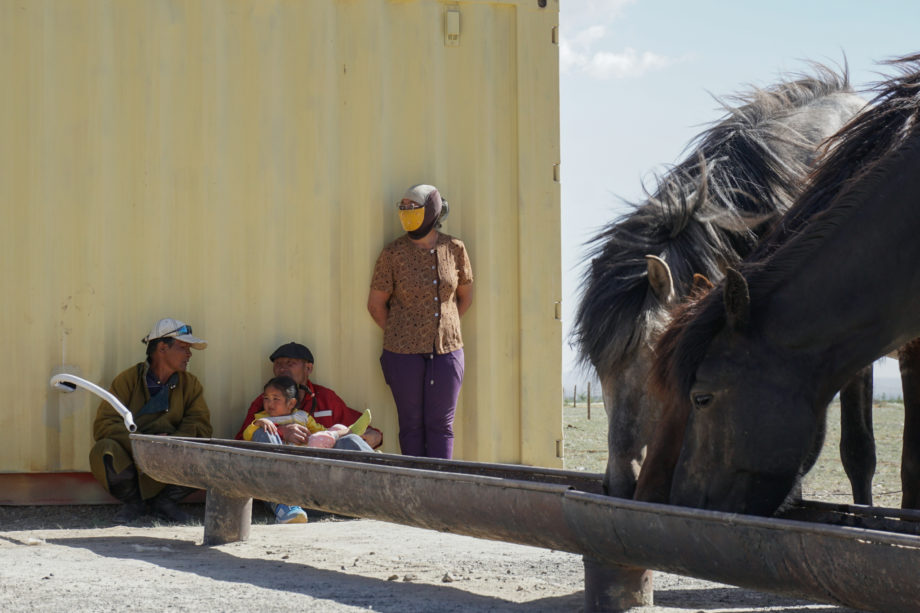 Families try to guard or fight for their share of water as they seek to hold on to this generations-old profession. Meanwhile, the reality of climate change looms over the region — way more than it does in most parts of the world. Mongolia is one of the 10 countries most affected by global warming and climate change due to its geographic location and extreme continental climate, according to an Asian Development Bank report. Over the last 80 years, the average temperature in Mongolia has warmed by 2.25 degrees, making it almost three times higher than the global average. Even a one-degree rise is a substantial change, says Batbold Dorjgurkhem, Mongolia director for the World Wide Fund for Nature, an international environmental organization. The situation in Mongolia, and specifically in the Gobi region, thus becomes “very destructive,” he says.

Herders also must deal with another party in this water tug-of-war: the mining industry. Currently, 14 companies are engaged in mineral extraction in the region and there are three major mining projects operating here. The extraction of coal and fluorspar, an important raw material for the industry that is used in the smelting of iron, consumes a lot of water, says Myagmar Shar, head of the Water Agency, a government implementing body. “Remember that here, water in itself is a kind of mineral.”

The mining companies say that there is no denying that mining consumes a lot of water, but they blame government policies for the water shortage. 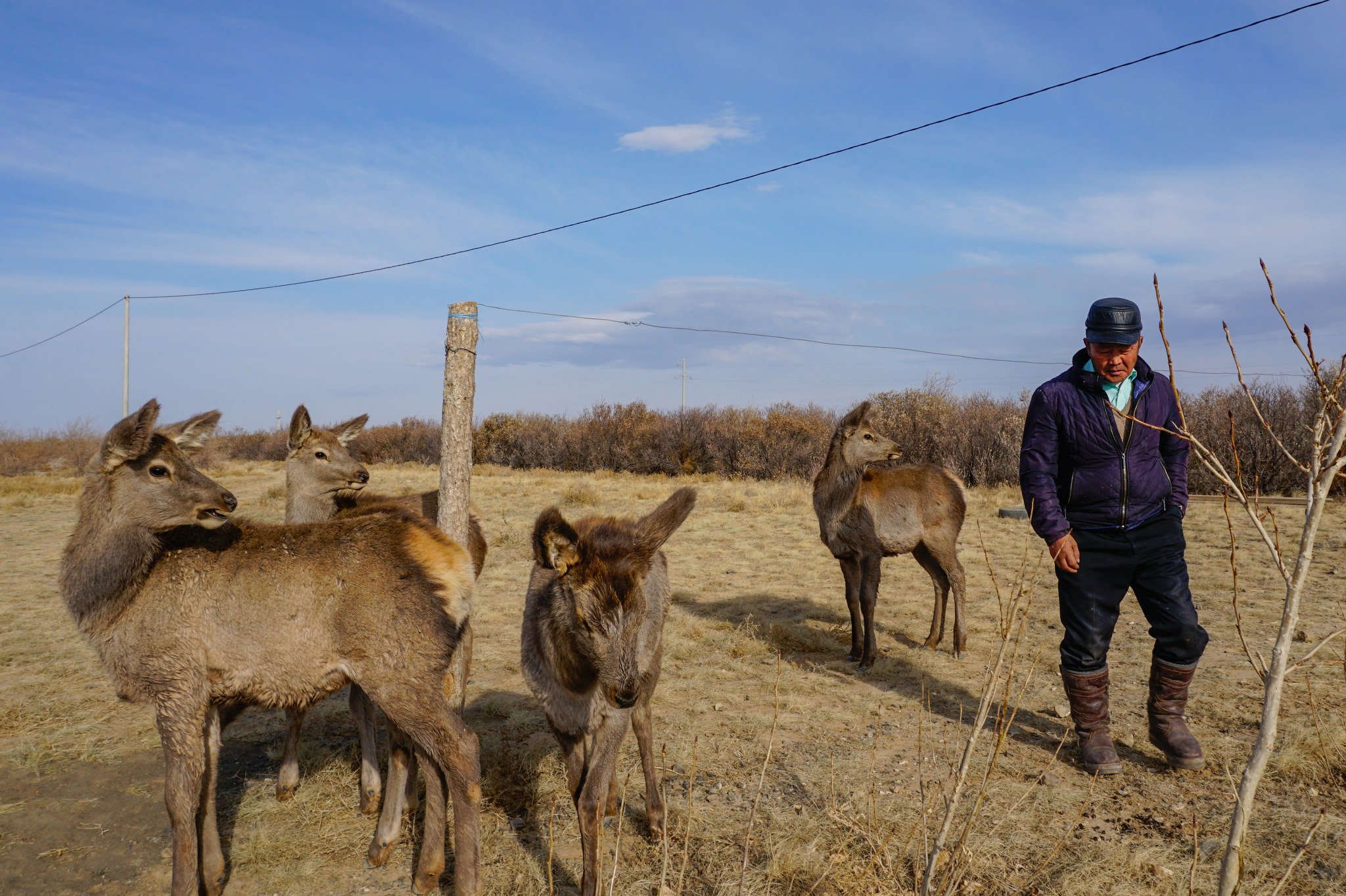 “If the government makes the right policies and the water users act honestly, there would be no need to use groundwater and deplete the resources,” says Bat-Amgalan Barbaatar, an environmental specialist for the Tavantolgoi mine.

But the Water Agency’s Myagmar dismisses the accusation, saying it is unacceptable to solely blame government policies. He says on several projects, the government is stuck due to the lack of funding. “Our country is burdened with debt and has reached its maximum borrowing limit … so we are unable to start any big projects,” Myagmar says.

In May, Prime Minister Oyun-Erdene Luvsannamsrai held a meeting in the province and acknowledged that “herders are in an extremely difficult situation.” He introduced the Blue Horse project, which aims to increase the accessibility of water in Gobi by building water pipelines to the region and establishing multipurpose reservoirs on major rivers, such as the Orkhon, Tuul and Kherlen, to collect rain and floodwater. The local government is working to increase the region’s pasture irrigation supply — which was at 58% in 2021 — to 70% by 2025.

But with uncertainty driving the everyday lives of these herders, fights over water have become frequent. Batbaatar has already been threatened several times, once with a warning that, if he came closer to a well again, he would be greeted with a rifle.

“In the past, local herders used to come and greet those who are on the move with tea,” he says. “Nowadays, when you see a person approaching, you are afraid that the person is coming to chase you away from their wells and pastures.” 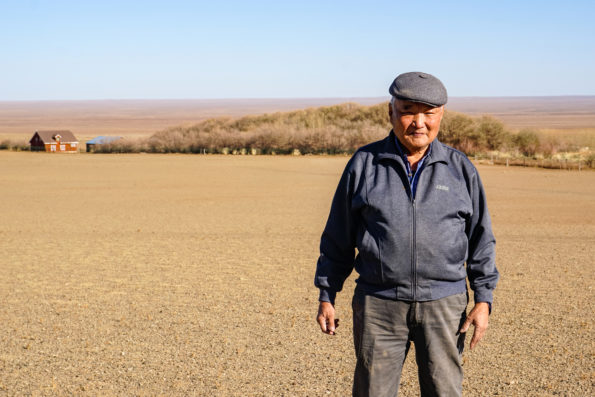