“They are interested in learning about the salamander,” says Lisel Landi Orozco Gómez, a director at the Wildlife Conservation Management Unit (UMA “Atlicuilco”), a government-authorized conservation project, as she observes the tourists. A few steps away from the canal, axolotls from 3 months to 5 years old range across 10 large ponds — one of several initiatives to conserve the species.

The axolotl is found in the wild only in the town of Xochimilco, in canals among the chinampas — floating agricultural fields that date back to the Aztecs. The amphibian occupies an important place in Mexican lore: Legend has it that the Aztec god Xolotl, called upon to sacrifice himself in order to make the sun move and not wishing to do so, disguised himself as the creature now known as the axolotl. Axolotls are scientifically important, too: They have the ability to completely regenerate their limbs, spinal cords, eyes and even parts of their brains.

In recent years, the axolotl is grappling with regeneration in a different sense: It is in danger of extinction. Owing to a host of factors, including pollution in their habitat, illegal commercial fishing and the introduction of fish that eat axolotl eggs and larvae, the axolotl population in Xochimilco plummeted from 6,000 per square kilometer (2,300 per square mile) in 1998 to fewer than 35 per square kilometer (14 per square mile) in 2014. Last year, however, the endangered species received support from an unexpected source — Banco de México — sparking popular interest in its conservation.

“We’ve been getting approximately 1,700 visitors on the weekends, which is great news,” says Pamela Valencia, founder of Museo del Ajolote, in western Mexico City. The museum hosts a colony of 15 axolotls and works to improve the ecosystem to release them into their natural habitat. “There have been times when we wouldn’t get any.”

On Oct. 29, 2021, Banco de México, Mexico’s central bank, issued a new 50-peso ($2.51) bill, the last in a series of redesigned bank notes intended to combat counterfeiting, facilitate people with visual impairments, and increase the note’s longevity. While the reverse of the old 50-peso bill featured the famed Morelia aqueduct and monarch butterflies, the new note depicts the axolotl in its natural habitat, among the chinampas and ahuejote trees, a willow species native to Mexico. The decision to feature an axolotl — which many people believe is an axolotl named Gorda, although Banco de México clarified that it used various images for reference — has shone a spotlight on decadeslong efforts to rehabilitate the species. 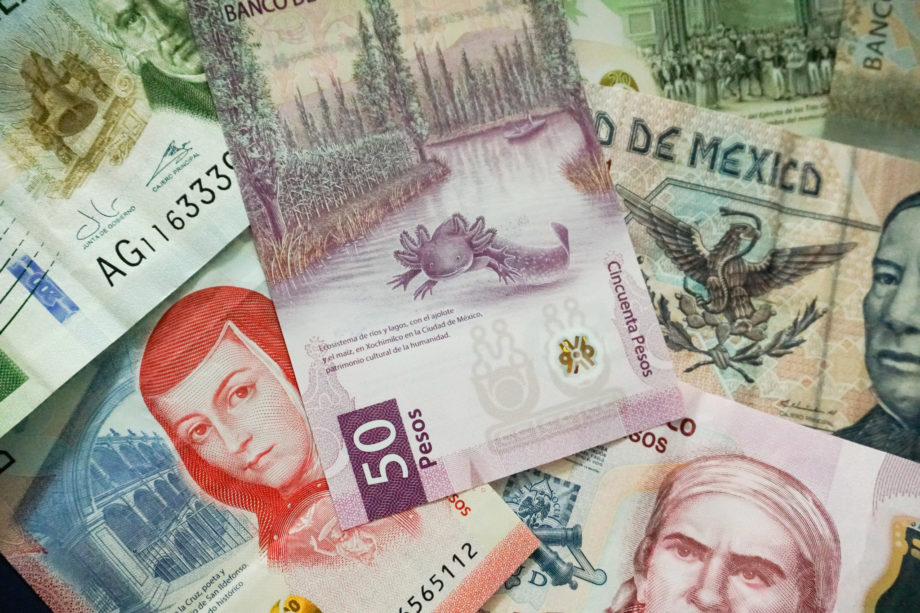 The 50-peso bank note featuring an axolotl, in circulation since 2021, is so popular that people are choosing not to spend it.

“We want to communicate a message of responsibility regarding the great cultural and natural heritage we have in the country, so that we know it, we treasure it, we promote it, we take care of it,” says Alejandro Alegre, general director of issuance at the bank. The bill received the International Bank Note Society’s 2021 Bank Note of the Year Award and has caught local imagination to such an extent that online sellers are offering it for as much as 500,000 pesos (approximately $25,000). Rocío Espinoza de los Monteros, a curator at Mexico’s Numismatic Society, a collective devoted to studying currency, says people are collecting the bill rather than spending it due to perceived scarcity, although the note is currently in circulation.

Paola Vargas, 26, one of the visitors at the Museo del Ajolote, waited with her young son for over 30 minutes to enter the museum. “My 7-year-old son saw on TikTok that the axolotl from the bill was here,” she says. “He showed me the video, and I told him, ‘We should go see it.’” People of all ages visit the museum, but children seem most keen, Valencia says. 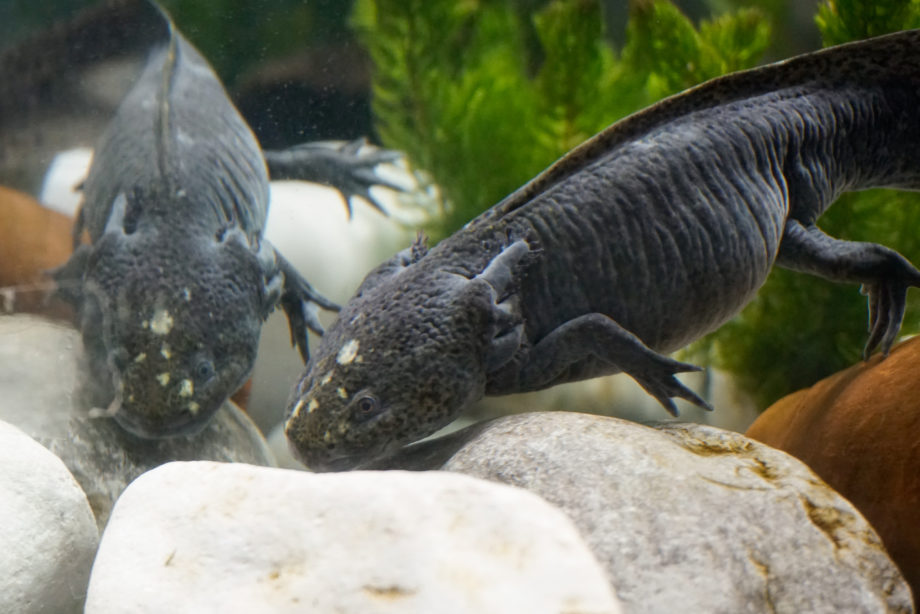 Gorda, the 5-year-old axolotl widely — albeit mistakenly — believed to be featured on the new 50-peso bank note, swims in her tank at the Museo del Ajolote in Mexico City.

Georgina Ruiz, 48, visited the museum with her spouse and children. “We didn’t know about the axolotls. We hadn’t seen them until they came out on the bills. We found out that they are in danger of extinction,” she says. “We can help by coming and contributing a little, spreading the word about the project.”

Luis Zambrano, a researcher at the Institute of Biology at the National Autonomous University of Mexico, has studied axolotls for 14 years. Since the rollout of the new note, many have approached him to learn more about the species. A woman in Barcelona, Spain, emailed him, requesting he talk about salamanders at her son’s school; a German couple asked him to accompany them to Xochimilco to meet the creatures.

“I’m not a travel agency,” says a laughing Zambrano, who decided to connect the couple with a chinampa farmer that participates in his conservation project. 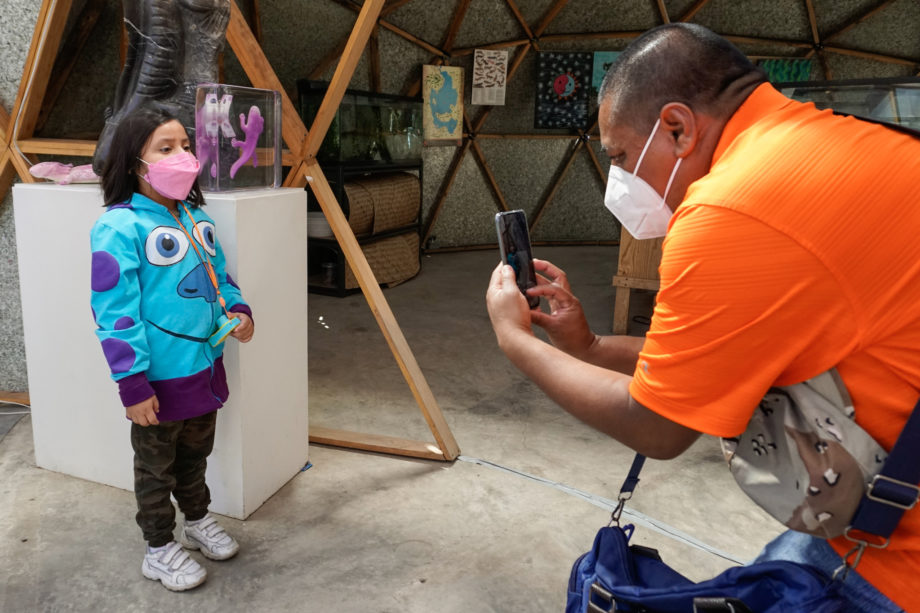 Héctor López Niño takes photos of his daughter, Erandi López Ruiz, 6, next to a display of Mexico’s new 50-peso bank note at the Museo del Ajolote.

His team has also begun receiving donations from children. “It’s not a stratospheric amount, but we like it,” he says, “because the seed of true environmental education is there, in the next generation, who will probably do more for the conservation of species — in particular, this species.”

Zambrano’s efforts to protect the axolotl involve encouraging traditional methods of cultivation — including eschewing fertilizers and pesticides — on the chinampas in Xochimilco. So far, 48 chinampa cultivators are participating in the initiative, but many others are deterred by the prospect of lower yields. Zambrano’s team is also considering releasing axolotls into an artificial lake within an ecological reserve administered by the university. While conditions are suitable, the municipal system often draws water from the lake, causing researchers to worry that it will empty out, leaving the axolotl to die. 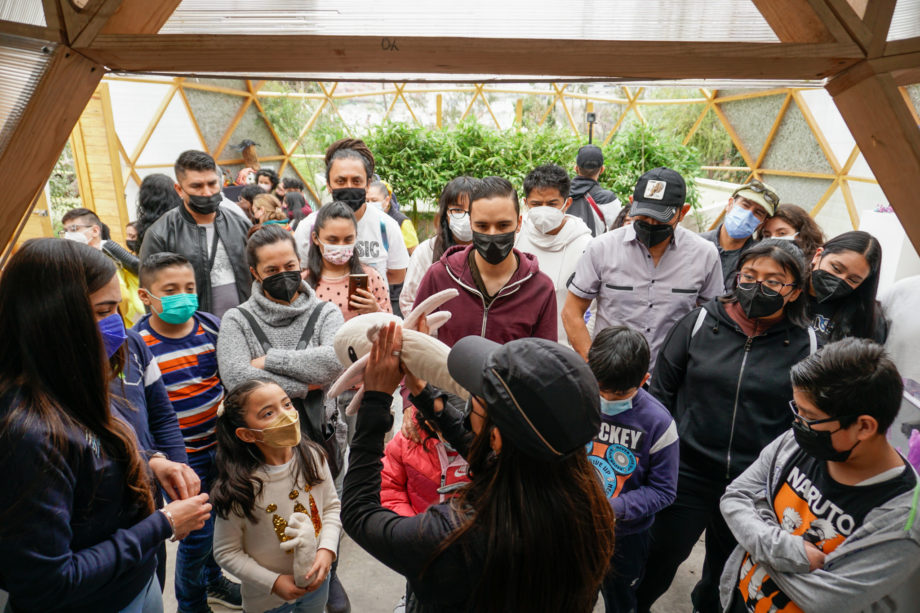 Tourists learn about the axolotl at the Museo del Ajolote. The museum has experienced a surge in visitors since Mexico’s central bank issued a 50-peso bank note featuring the species in 2021.

Zambrano also frets over the downside of heightened attention. He recounts, for instance, a recent event organized by the mayor of Xochimilco, where axolotls were released into the canals with great fanfare but poor handling and little research. The water there was likely too acidic for them to survive and teeming with fish ready to feast on them, he says.

Still, he is more hopeful than he has been in recent years. “Five or 10 years ago, I used to say the salamander and Xochimilco have gone to hell — it is going to take a lot to restore it,” he says. The recent swell of interest has heartened him, despite the abiding threat to the axolotl and its habitat. “I am seeing a growing need and intelligence on society’s part to say, ‘No, let’s stop this nonsense. Let’s start working in favor of the salamander.’”