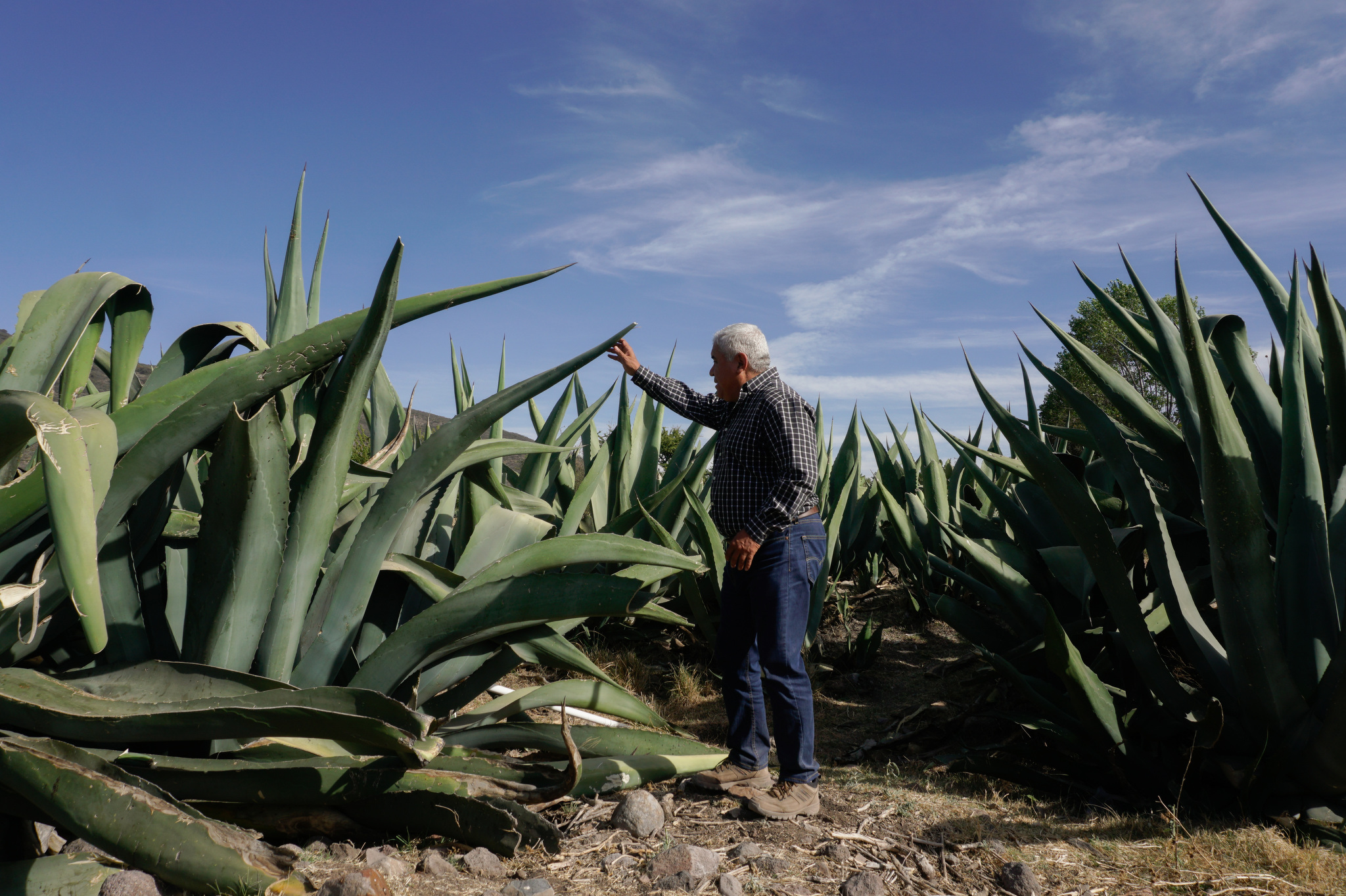 PUEBLA, MEXICO — Mezcal, Mexico’s traditional agave spirit, has enraptured palates across the country and abroad. But as demand soars, a more bitter note emerges: the amount of waste its production generates and the risks that poses for the very environment that sustains it.

Like tequila, mezcal is a distilled beverage produced from agave, a plant native to the arid and semiarid zones of the Americas. Both mezcal and tequila are produced by cooking and fermenting the piña, the heart of the agave, and distilling its juice. The byproducts of these processes are highly polluting, resistant to decomposition, and potentially toxic for aquatic life if dumped in rivers without treatment.

Some farmers and researchers are coming up with solutions to reuse all this waste. Besides protecting the environment, they hope to create jobs along the mezcal value chain. And while the tequila industry grew exponentially in the past decades with little consideration for the environment, most mezcal “palenques,” as mezcal factories are known, are still small, family-run businesses. These solutions could offer an opportunity for mezcaleros to make their product environmentally friendly from the start. 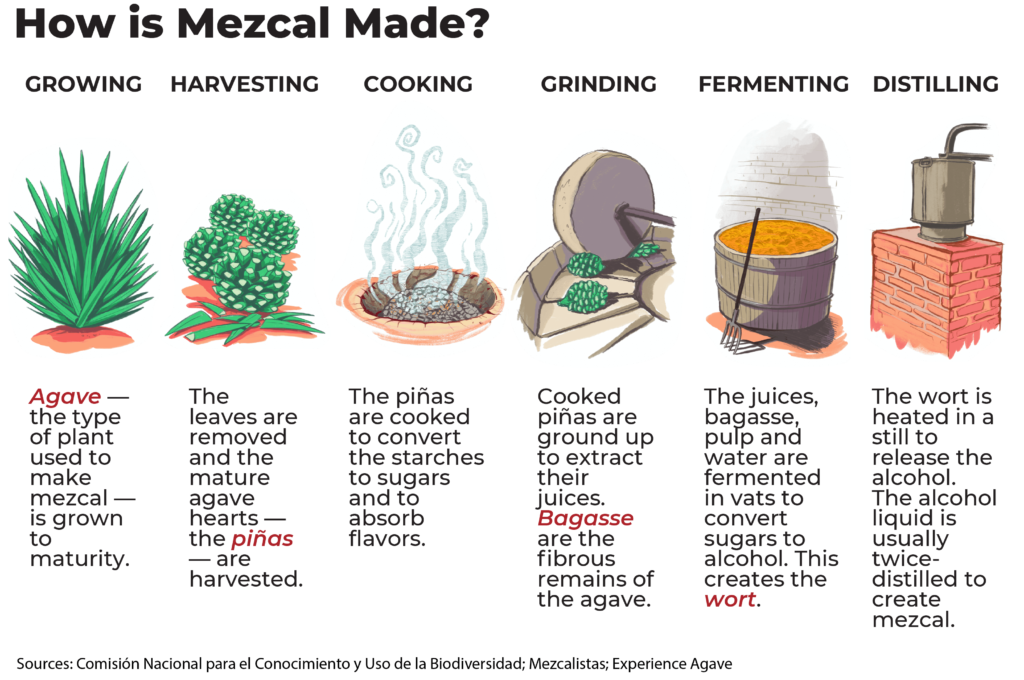 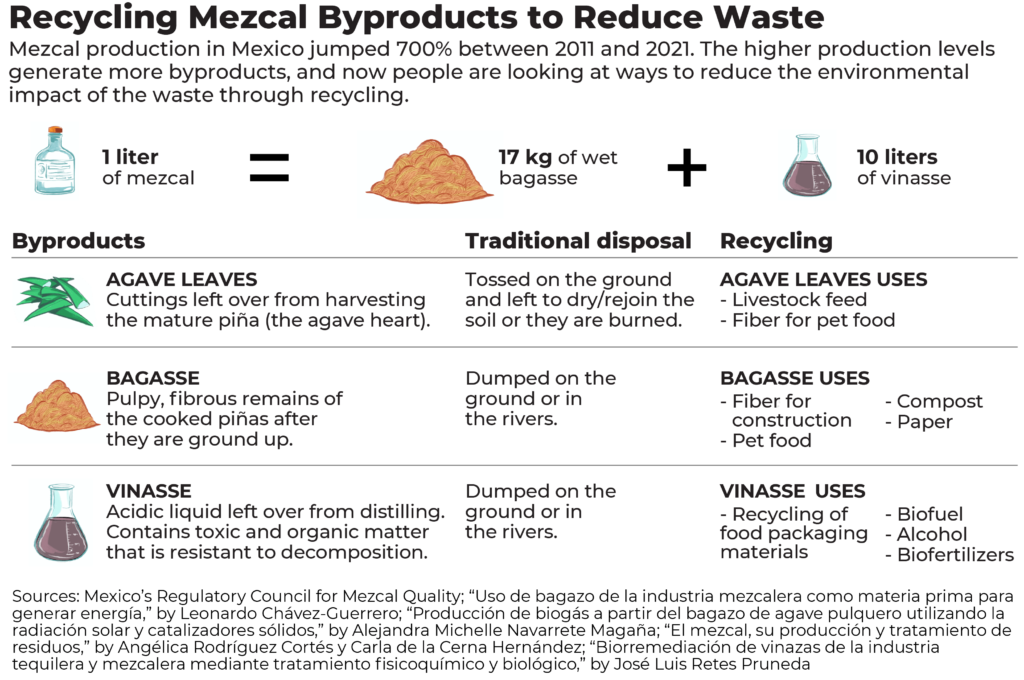 More than 8 million liters (2.1 million gallons) of mezcal were certified in 2021 — a 700% jump from 2011 — according to Mexico’s Regulatory Council for Mezcal Quality, the entity that regulates mezcal production. Different studies estimate that the production of a single liter of mezcal generates about 17 kilograms (37 pounds) of wet bagasse, the solid residue, and 10 liters (over 2.5 gallons) of vinasse, the liquid residue.

What that means is that, in 2021 alone, Mexico’s national mezcal production generated about 136,000 metric tons (nearly 150,000 U.S. tons) of wet bagasse and 80 million liters (over 21 million gallons) of vinasse — the majority of which were very likely dumped on the soil and in rivers without treatment, says Carmen Rosana Estrada, a biologist and mezcal consultant. These residues have a high concentration of phenols, which can be toxic for different organisms. 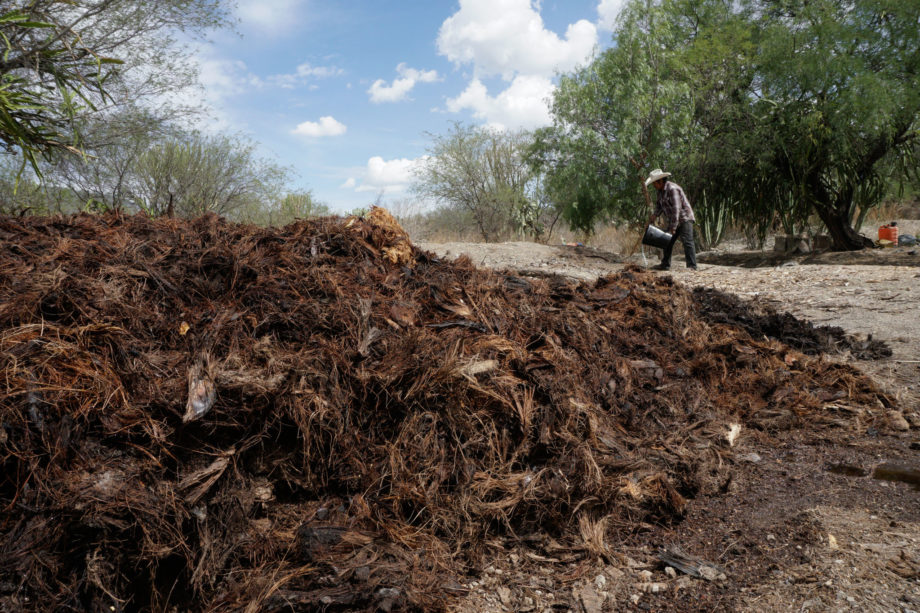 Benito Hernández, a worker at a mezcal farm in Zapotitlán Salinas, Mexico, adds water and molasses to bagasse, the solid residue of the mezcal-making process, so that it can be used as plant compost.

The potential damage from tequila, which is produced similarly and generates roughly the same amount of waste as mezcal, is even greater. In 2021, Mexico produced an all-time record 527 million liters (139 million gallons) of tequila, most of it for export.

But there are ways to put all this waste to use. Instead of being left to dry or be burned, the agave’s green and spiky leaves can be used to feed cattle. As a rich source of fiber, the leaves are also an ideal ingredient for pet food. And the vinasse could be used in package recycling — or as biofuel, which could mitigate farmers’ own electricity costs.

“The tequileros and mezcaleros ignore the leaves,” says Alejandro Vasconcelos, whose factory Noble Indulto, in the central state of Guanajuato, has been producing mezcal for five generations. His farm repurposes the agave leaves as cattle food — useful during droughts, when grass is scarce. 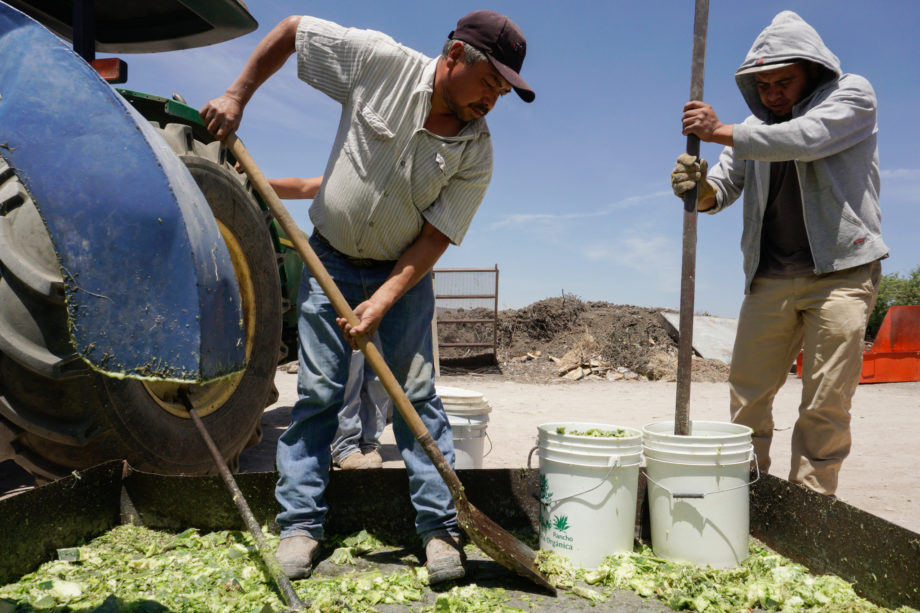 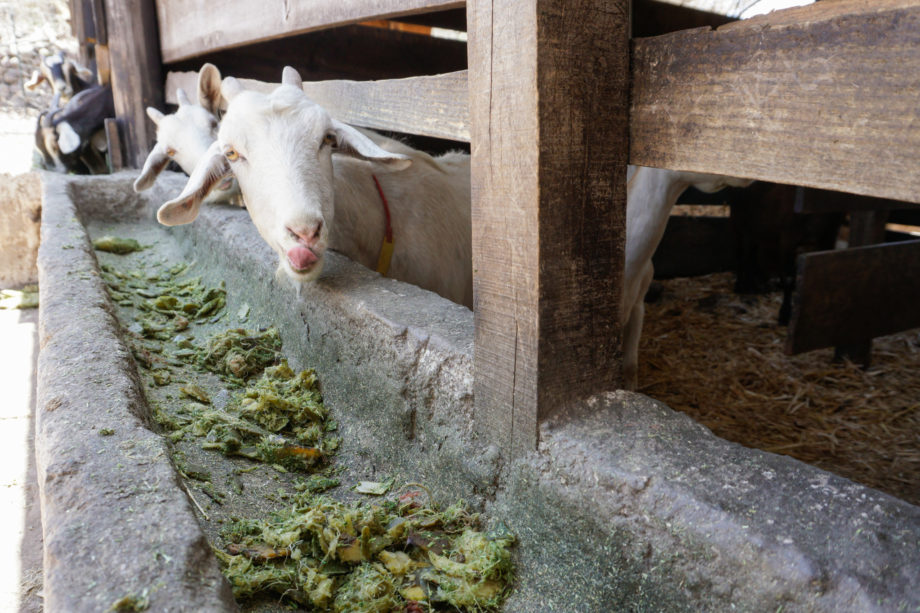 Pruning the leaves regularly has also been found to improve the sugar concentration of piña, making for a better mezcal product anyway, says biotechnologist Juan Frías, who runs a company that recycles agave residues. Most farmers wait from six to eight years for the agave to mature before they ferment it, not touching the leaves until then. Earlier pruning, Frías says, provides cattle feed in this interim.

“It makes me very sad to see people walking around with their poorly-fed animals among the agaves,” says Frías, who also directs The Billion Agave Project, an initiative by Regeneration International, a United States-based nonprofit focused on generative agriculture and land management. “And I tell them: ‘Hey, you have food right there.’”

Frías’ company uses the leaves to produce fiber pellets, which are then sold to manufacturers of pet food. “The dog owner wants the pet’s excrement to be solid, and this is achieved with fiber,” he says. He adds that his factory currently produces 2,000 metric tons (2,200 U.S. tons) of fiber pellets a month while having enough demand for 15 times that — which is why he is constantly looking to buy leaves from other mezcal producers, he says. 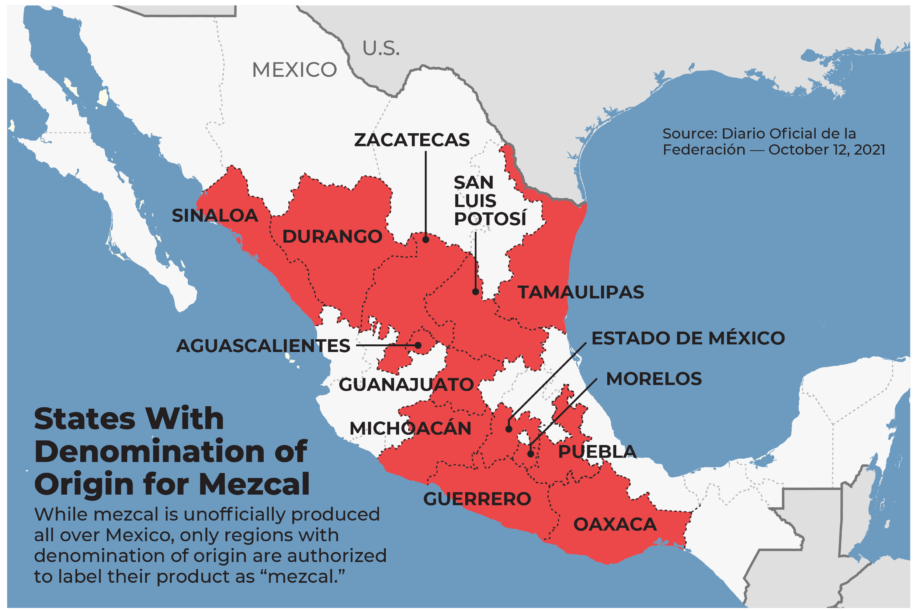 Meanwhile, Estrada, the mezcal consultant, is developing a project with the Benemérita Universidad Autónoma de Puebla that would use the vinasse — the most toxic byproduct of mezcal production — as biofuel.

Also in Puebla, René Mendoza, who runs a recycling business, developed a project with the Universidad Popular Autónoma del Estado de Puebla to use vinasse in the recycling process of food packaging. The university has applied for a patent and, Mendoza says, is in negotiations with a multinational food packaging company.

For Frías, the piña is just the cherry on the big cake that is the agave: it “is carbon footprint, is water footprint, is soil conservation and is biodiversity,” he says. At a time when countries are devising new strategies to fight climate change, Vasconcelos is certain that the agave will play a big role in Mexico. This plant, he says, “only needs one liter of water a year to survive, and one can obtain so many things from it.”