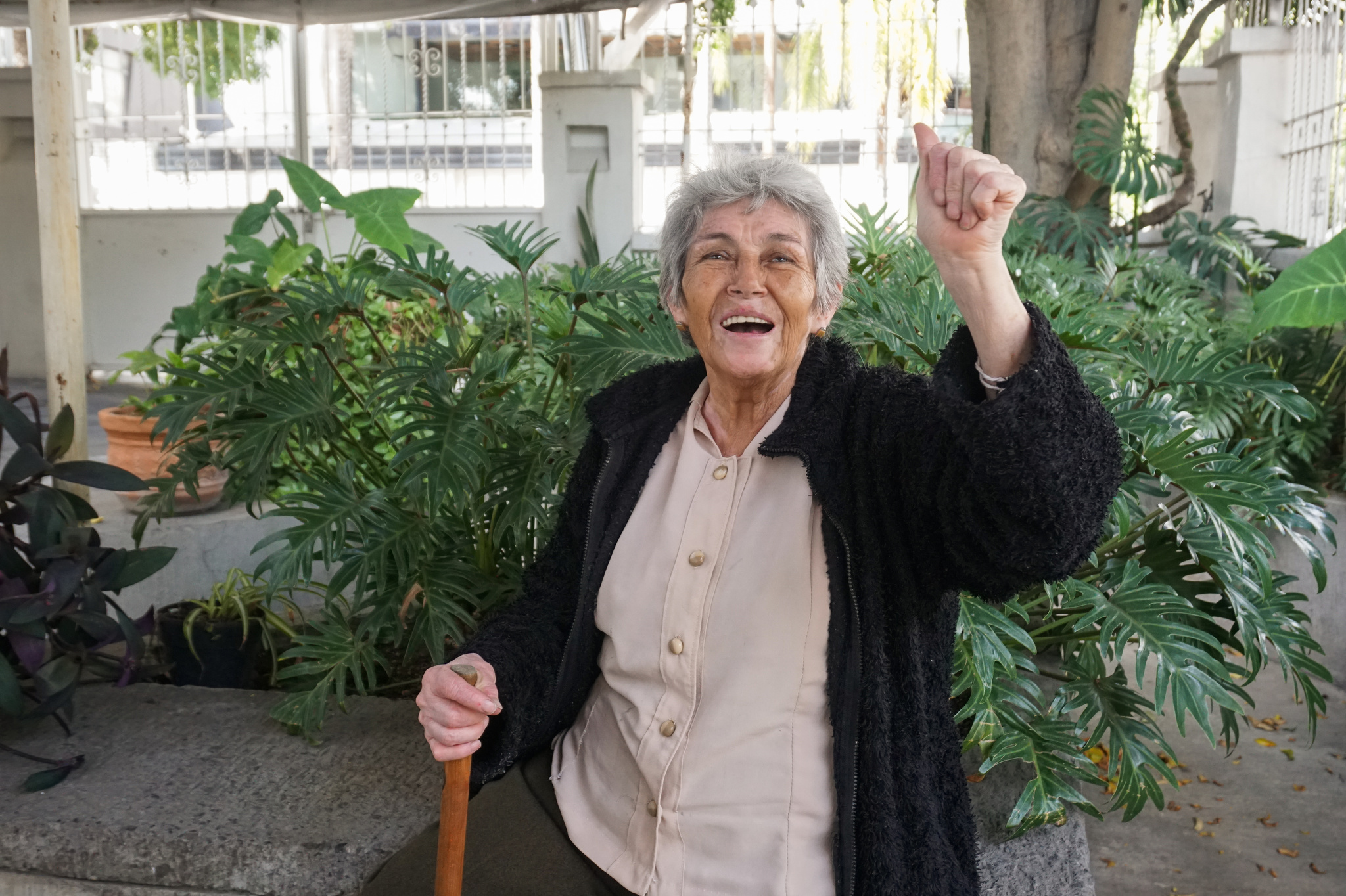 Temacapulín, where García was born, is a small town in the highlands of the western state of Jalisco, 136 kilometers (84 miles) from Mexico’s second-largest city, Guadalajara. According to government data, it is home to fewer than 500 residents. To get to it, one must first drive through a foul-smelling industrial corridor, followed by chicken and pig farms and an unrelenting monoculture of agave.

Then, 9 kilometers (6 miles) from Temacapulín, the sky clears. One can breathe again.

In 2005, residents of Temacapulín and its two sister communities, Acasico and Palmarejo, found out that their towns would be washed away by the construction of a dam on Río Verde, a river in central Mexico. Initiated by President Vicente Fox at the end of his tenure, with an intended completion date of 2015, El Zapotillo dam was intended to provide drinking water to the city of León in neighboring Guanajuato state, to the city of Guadalajara, home to more than 5 million, and to the water-intensive livestock industry in Mexico’s western highlands, the country’s main pork- and egg-producing region.

But in an illustration of the uneven benefits of many large infrastructure projects, the dam would also displace, in one fell swoop, the residents of Temacapulín, Acasico and Palmarejo. After a 17-year struggle, involving advocacy, activism and legal action, these residents are now close to winning the right to remain on their ancestral lands. 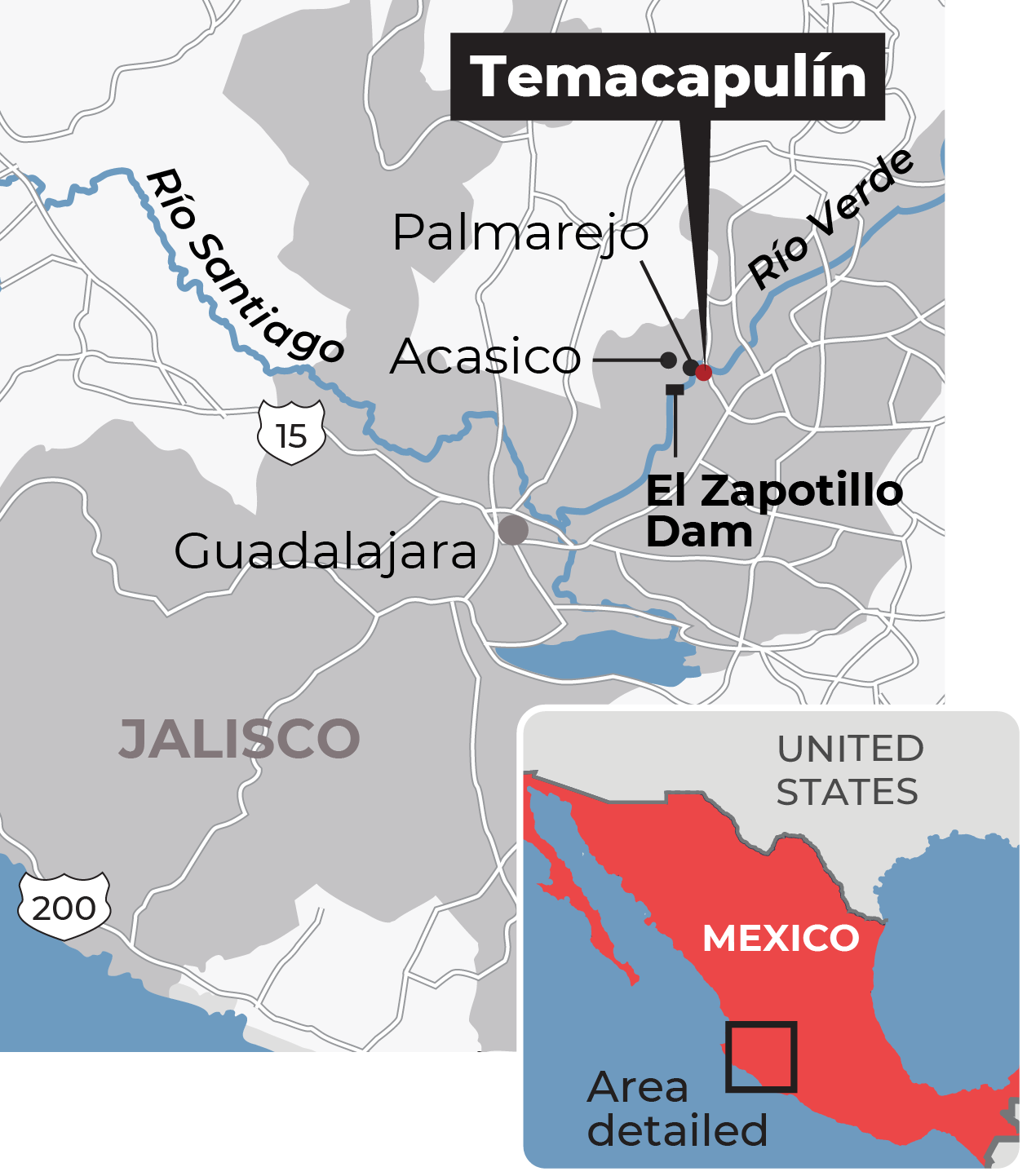 “Imagine losing your roots, your traditions, your culture,” says Abigail Agredano, 72, president of the Save Temacapulín, Acasico and Palmarejo Committee. “We were incredibly angry and sad — and that fury is what pushed us to fight.”

Construction on El Zapotillo — including a 105-meter grout curtain and a 139-kilometer aqueduct to transport water to León — began in 2009. The opposition to the dam began before that. The townspeople held sit-ins and launched legal challenges. They allied themselves with other communities fighting similar battles — such as those affected by La Parota dam in the state of Guerrero, and the towns of Paso de la Reina in Oaxaca and El Cajón in Nayarit — and national groups, such as the Mexican Movement of People Affected by Dams and in Defense of Rivers, the Mexican Institute for Community Development, and the Coa Lawyers’ Collective. Some 430 ongoing conflicts pertaining to dams and water distribution have been documented across the world and in 2010, Temacapulín hosted the Third International Meeting of Dam-Affected People. More than 320 attendees from 54 countries flocked to the tiny Mexican town.

Residents of the affected communities say authorities didn’t consult them: They were simply told that the government would buy their land and move the town to a subdivision farther up the mountain. But in 2014 — with the dam nearly 87% complete, according to data from the National Water Commission — the Mexican Supreme Court ordered a halt on construction. 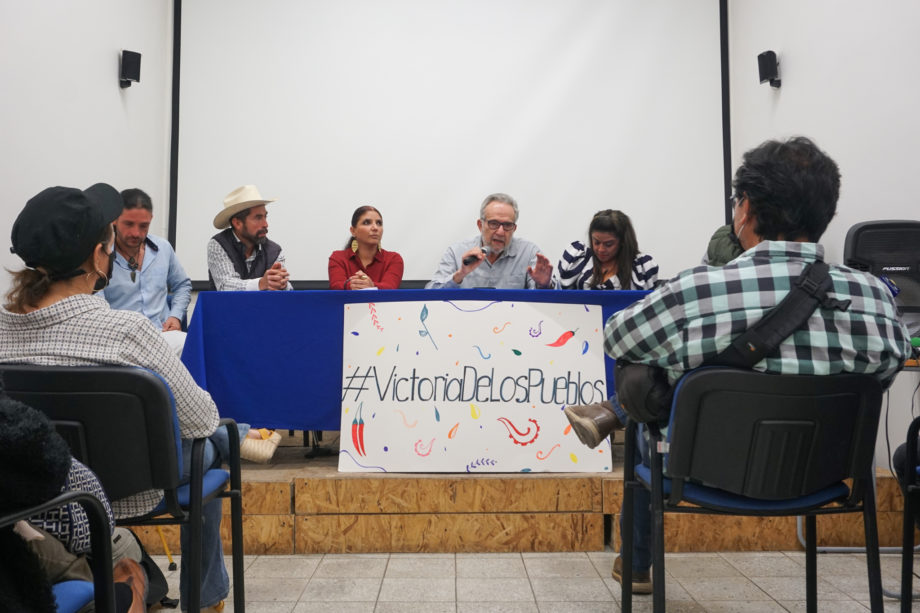 At a November press conference convened in Guadalajara and attended by representatives from the United Nations and various Mexican rights groups, residents from Temacapulín unveiled a list of agreements reached with authorities to break the impasse on El Zapotillo dam.

The National Water Commission, the authority responsible for managing Mexico’s water resources, including the construction of dams, didn’t respond to multiple requests for comment.

Even after construction ceased, a sense of impermanence lingered in Temacapulín, as residents feared the court injunction could be temporary. Newlyweds who would normally build their own homes hesitated. Some young people moved to cities, where they struggled to adjust to urban life. Older people refused to leave. One of García’s friends considered suicide, she says.

But García rebelled. “Injustice has always set me off,” she says. 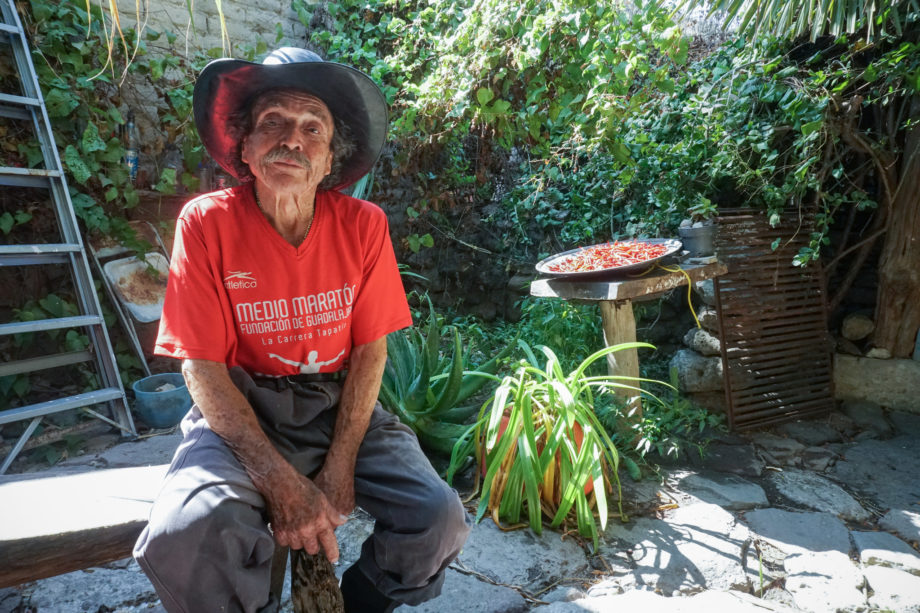 Alfonso Íñiguez, born in Temacapulín in 1936, is one of the leading figures in the fight against El Zapotillo dam.

In a 2017 white paper, the water commission argued that the El Zapotillo project would benefit around 2.7 million people whereas only 1,030 people would be adversely affected. This framing is misguided, says Pedro Arrojo, United Nations special rapporteur on the human rights to safe drinking water and sanitation. “When they talk about minorities and majorities, they sometimes say, ‘I’ll flood you and I’ll quash your human rights because those of us who would benefit are greater in number,’” he says. “It makes no sense.”

A large infrastructure project like El Zapotillo dam is only a partial solution to municipal growth and poor water infrastructure in some areas, says Carlos Enrique Torres Lugo, director of the government-run Intermunicipal System of Drinking Water and Sanitation, adding that about a quarter of Guadalajara’s water is stolen or lost in leaks. Given rising demand, he says, the water from El Zapotillo would only temporarily solve the city’s water woes. 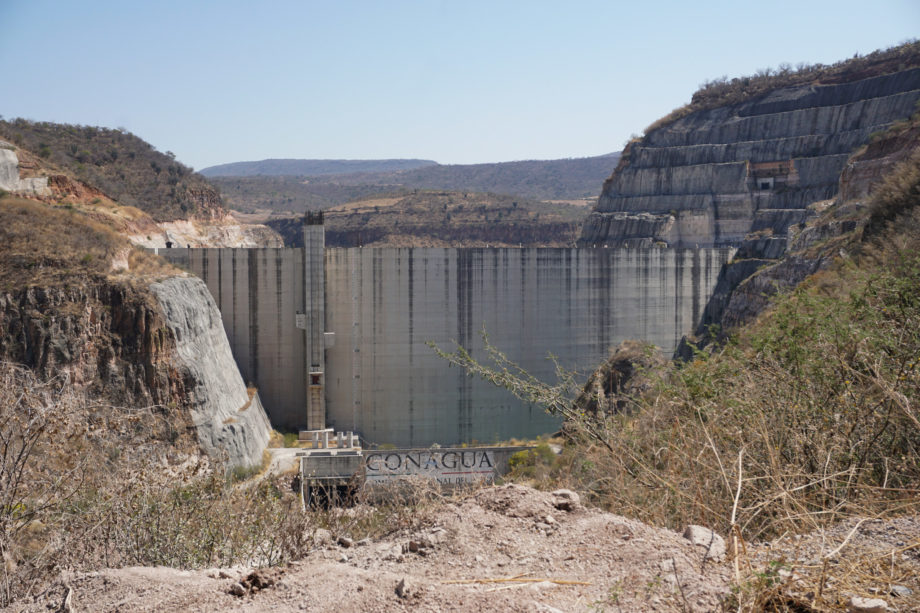 A view of El Zapotillo dam from the road to Yahualica, a town neighboring Temacapulín.

In a recent press conference, Gabriel Espinoza, one of the residents spearheading the resistance in Temacapulín, raised a similar concern, urging the city to consider a different approach. “Could it be time to retake local management of water?” he said. “Could this be the moment in which each municipality reappropriates that responsibility — and we, as citizens, become responsible for the comprehensive management of water in each neighborhood, each block, each family?”

There are other considerations too, says Tunuary Chávez, head of the analysis and context unit at the State Commission on Human Rights in Jalisco. Río Verde, site of El Zapotillo dam, feeds into Río Santiago, which flows through Guadalajara — a water body seething with industrial effluents such as lead and mercury.

“It’s from this intersection of rivers that the water [from the Santiago] is able to breathe,” Chávez says.

Damming the Río Verde — and limiting the flow of fresh water into Río Santiago as a result — would not only affect agricultural plots downstream but also disturb the ecosystem of an already polluted city, Chávez says. 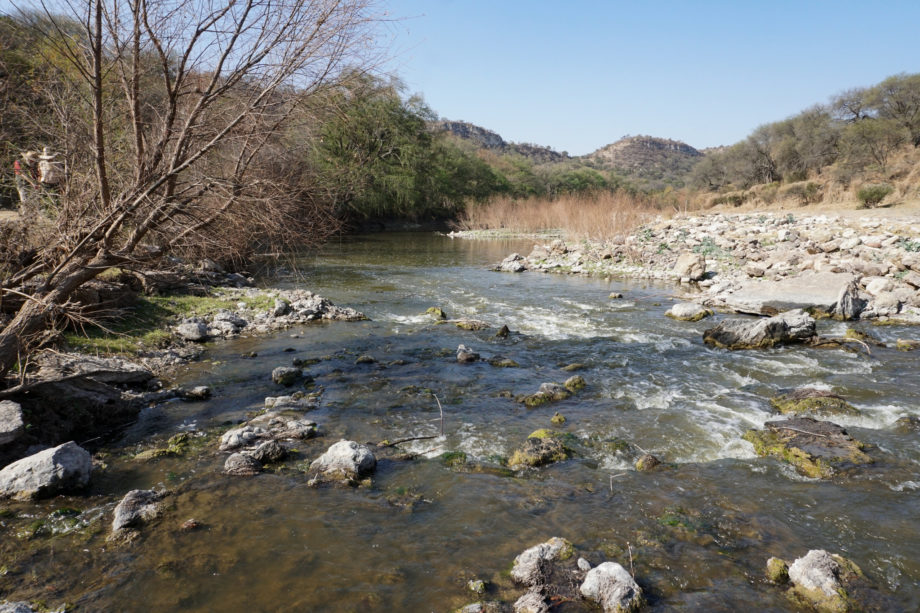 The Río Verde, where El Zapotillo dam was built, is home to diverse flora and fauna, including a tree species that dates back to the Mesozoic era.

Last year, Temacapulín’s long struggle began to yield results. President Andrés Manuel López Obrador visited the town in November — his third visit of 2021 — and reiterated that the townspeople would not be abandoned. Three days later, residents held a press conference where they issued a list of proposals and accomplishments. Among these: The dam could become operational, but its height would remain at 80 meters (262 feet), filled to no more than 40 meters (131 feet); its water would not leave the state and would be designated for people rather than industry. The aqueduct to León would be scrapped altogether, the project would undergo a technical and financial audit — and, most crucially, none of the communities at risk would be flooded.

The townspeople have also demanded a restoration of the Río Verde, which they say has suffered ecologically from the construction of the dam and related sand and gravel mining, and restitution for damages suffered by residents over the past two decades. In principle, all parties have agreed to these demands, including the federal government and the National Water Commission. But residents remain cautious. If the past 17 years have taught them anything, they say, it is to stay vigilant.

Alfonso Íñiguez, 85, one of the most resolute members of the resistance, recalls standing before the people of his town at a community gathering in February. “Do you think the dam did us harm?” he asked them. “Yes, yes, everyone said it did us harm. Well, no, because it got us thinking and woke us up.”

Maya Piedra is a Global Press Journal reporter based in Guadalajara, Mexico.