'I Was Waiting For This Chance to Flee'

Many people in a huge caravan that began in Honduras and is now in southern Mexico say they plan to walk to the U.S. Nearly 2,000 people have chosen along the way to seek asylum in Mexico, but more than 5,000 people continue north.

Photo at top: Hilda Honoria Vázques, 37, is from Copán, Honduras.

JUCHITÁN DE ZARAGOZA, MEXICO — When this thousands-strong group of travelers stopped in this town in southern Mexico, they were met by town leaders and aid agency workers who offered hot soup, temporary shelters, health care and other services.

That’s in stark contrast to what they’ll likely face if they make it all the way to the southern U.S. border, their intended destination. U.S. President Donald Trump has pledged to refuse entry to this huge caravan of people and use military force to push it back.

This isn’t the first time that people from Central America who say they’re escaping poverty, violence or both have formed a caravan to walk to the U.S., but this one has attracted broad attention because of its size.

It began in October in Honduras with a few hundred people, says Maureen Meyer, the director for Mexico and migrant rights at Washington Office for Latin America. (Some reports note that the group numbered as few as 160 people when it began.) The caravan grew as it moved through Guatemala and into Mexico.

At its peak, estimates pegged its size at 7,000 people.

Those people are part of a trend of increased asylum applications in Mexico. There were about 1,300 applications in 2013 but more than 14,500 in 2017, according to figures from the Mexican government.

The caravan currently walking through southern Mexico is large, Meyer says, but it represents a tiny fraction of the number of people who try to sneak into the United States.

On average, just over 1,660 people were apprehended each day by U.S. officials along the border in September, according to data released by U.S. Customs and Border Protection.

“This is a manageable problem,” Meyer says. “The caravan equals about two to three days of border crossings.”

Many people in the caravan say they plan to apply for asylum at the border and enter the U.S. legally. In most cases, people can only apply for asylum in the U.S. if they are at a U.S. border or are already in the United States.

Some of the people in the caravan currently in southern Mexico say they know that the U.S. government intends to reject them, but they’re not deterred. About 5,300 people were in the caravan when it stopped at Juchitán de Zaragoza, according to estimates by town officials, and most of those people intended to continue north.

(Interviews below have been edited for brevity.) 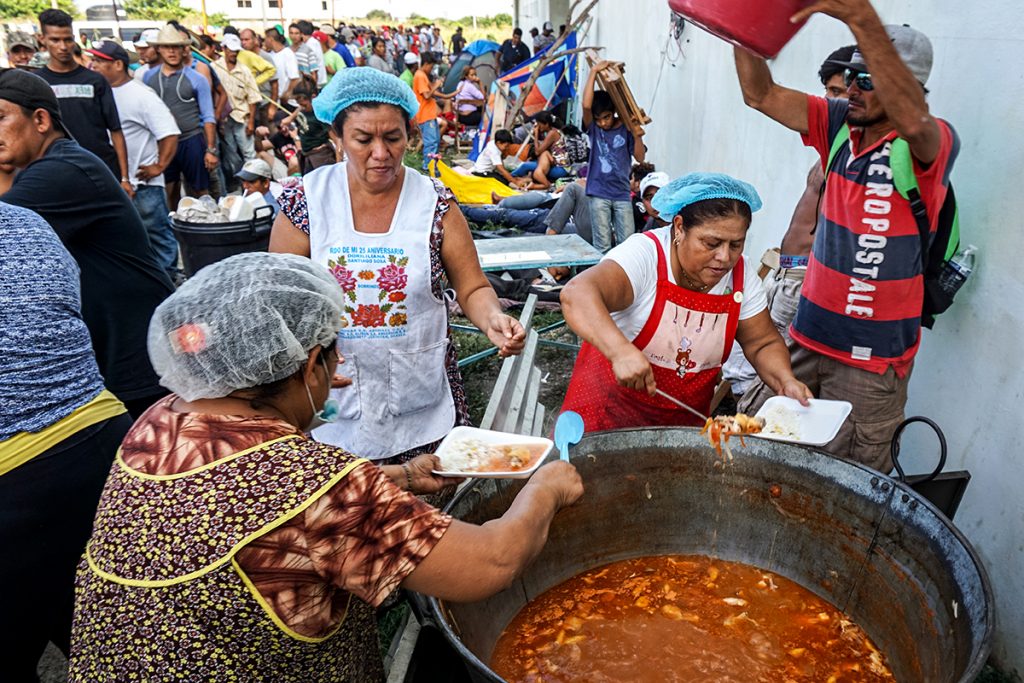 An estimated 5,300 people took shelter in an area that was built to be a bus terminal in Juchitán de Zaragoza, a town in Mexico’s Oaxaca state. The town’s officials, assisted by international and local aid agencies, provided the people in the caravan with soup, an electronics charging station and other amenities. The caravan left Juchitán de Zaragoza on Nov. 1.

Hilda Honoria Vázques (pictured in photo at top), 37, is from Copán, Honduras. She is traveling with her infant son. Her three older children remained in Honduras, where she hopes they’ll benefit from money she’ll send home if she finds a job in the U.S.

“It’s very tough in my country. There isn’t any food there, because of the lack of money. I am a single mom. I have four children. I left three of them there with my mom. My plan is to head up north … so I can work and raise my children. I can do housework or any other job.

“Sometimes you regret [joining the caravan] because you see that, damn, just seeing my son there, sleeping on the floor, or sick … but the reason I have migrated is my other children. They lack food, shoes, clothes. I just had to cry, because there wasn’t enough money, enough work.

“We have been treated very well. We will never forget Guatemala or Mexico. Such nice people! My son has always had diapers and food. Sometimes I cry because my children suffer for a juice, for a piece of candy. There is no money. Sometimes I regret not bringing my oldest son. At least he would be eating. I say, we eat more here than in Honduras.

“I ask God that the United States government – that its heart can be softened so it can give us employment, and we can feed our children.

“We are not criminals, no.” 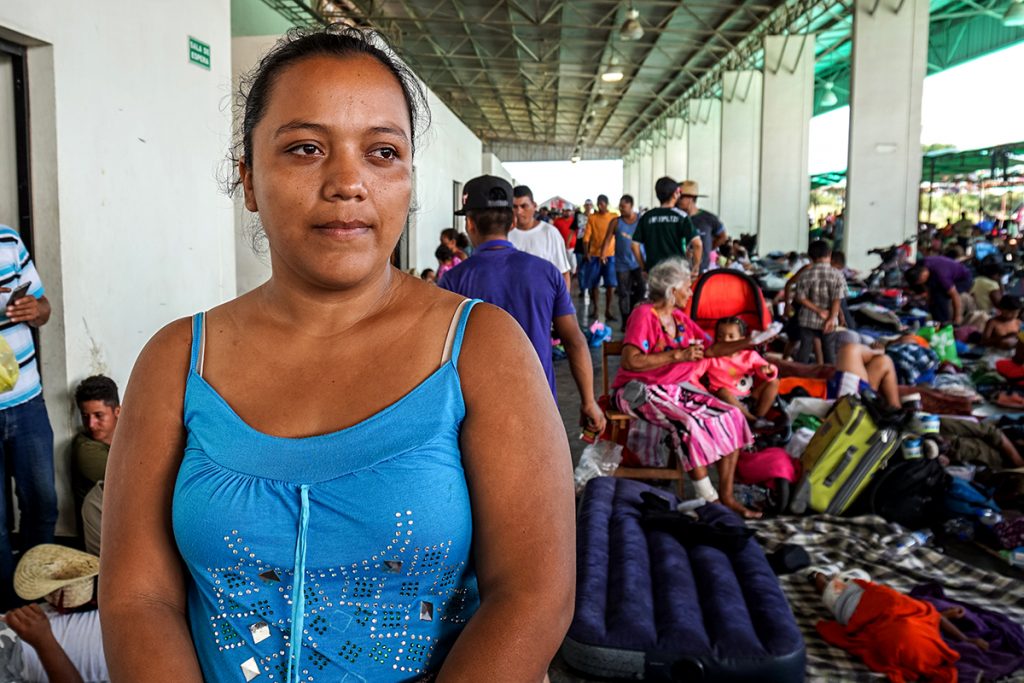 Sandra is from Santa Ana, El Salvador. She says she and her two children joined the caravan after a coyote – someone who smuggles people across borders – took her money and abandoned her. She says she applied for asylum in Tapachula, a town on Mexico’s southern border, but decided to join the caravan when she heard it was passing nearby. She asked that her last name not be published for safety reasons.

“My plan is to make it to the United States. My sister is there by herself with her girl. She tells me she is going to help me get there.

“[In El Salvador,] we worked in one gang zone and lived in another gang zone. We were told we had to pick a side. We started to get threats.

“My kids’ father is a gang member, so, to escape him, I left.

“He came home drunk and high, and he started to beat us. He doesn’t like my daughter because she is a girl – he has never liked her.

“He began threatening to kill my mom. [He said,] ‘If you don’t bring me my kids, at your mother’s funeral the three of you are going to pay.’

“Now he is in prison, doing time for five murders. I was waiting for this chance to flee.” 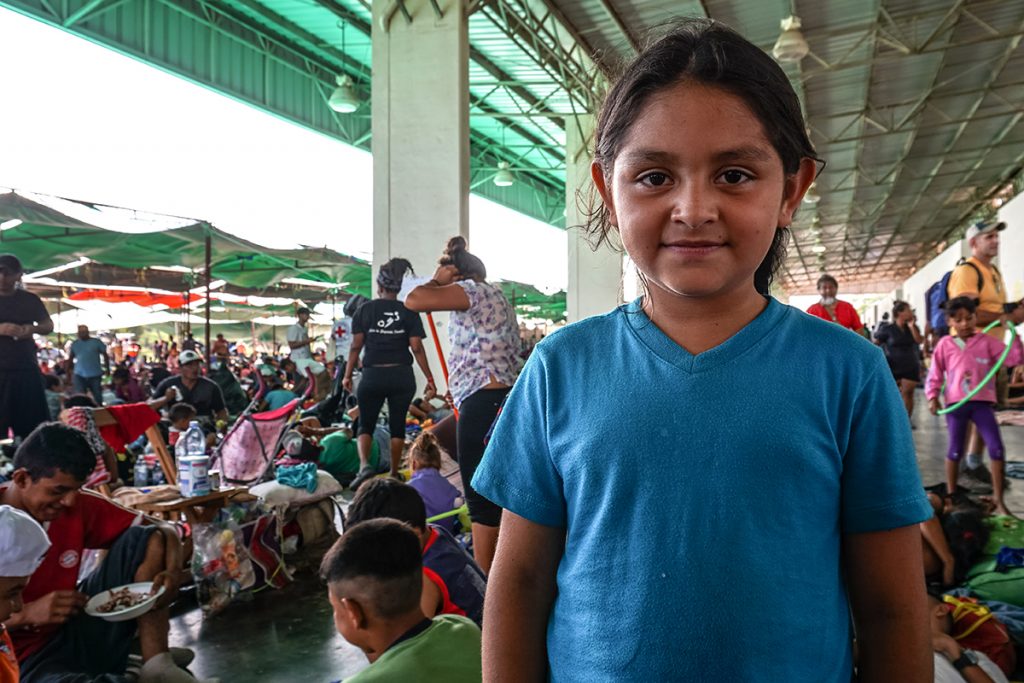 Clarissa, 9, is from Honduras. She is traveling with her mom.

“I came because, where I am from, there is a crisis. My life is poor. Sometimes people behave badly. Sometimes moms tell their kids to do things like steal. My mom has taught me not to steal. I was afraid to live there.

“In the caravan, things have been good. I haven’t been hungry. I want to get as far as where I can walk to.

“I have been afraid only sometimes, [like] when we get to a country and people say kids are being stolen.”

Editor’s note: Rumors spread among people in the caravan that children were targeted for abduction in Chiapas, Mexico’s southernmost state. This is a common concern among people who live in that state. 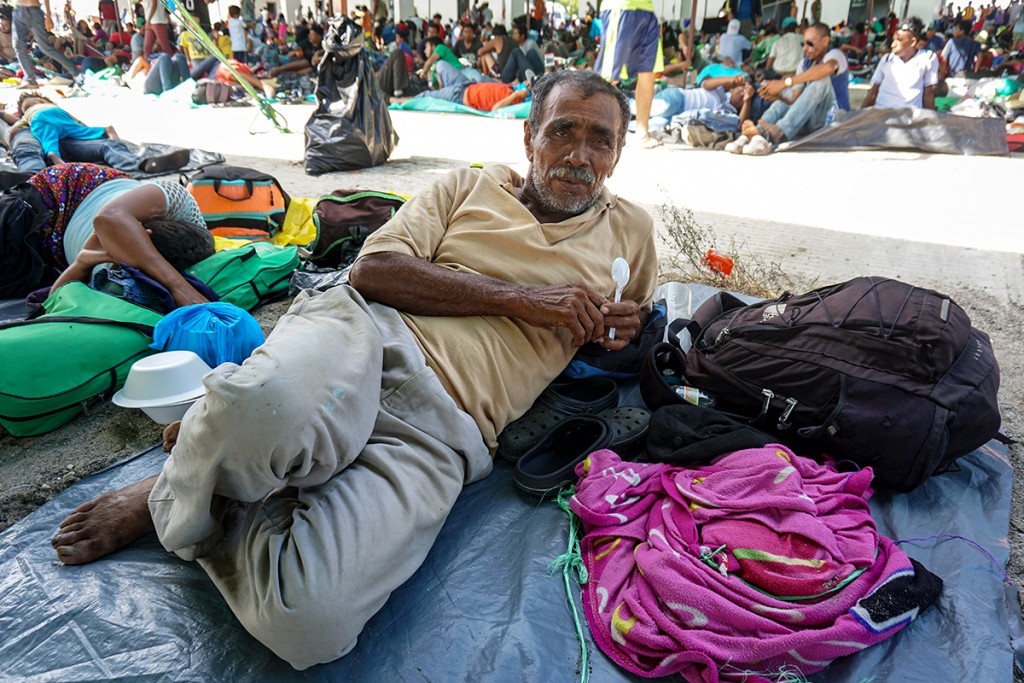 “My wife is very sick – it’s her sugar levels. I came to look for her medicine. I left my wife and my children.

“It’s really tough to get a job, and there are so many deaths. No one has the confidence to walk the streets anymore, there’s so much violence.

“I want to make it to the United States.” 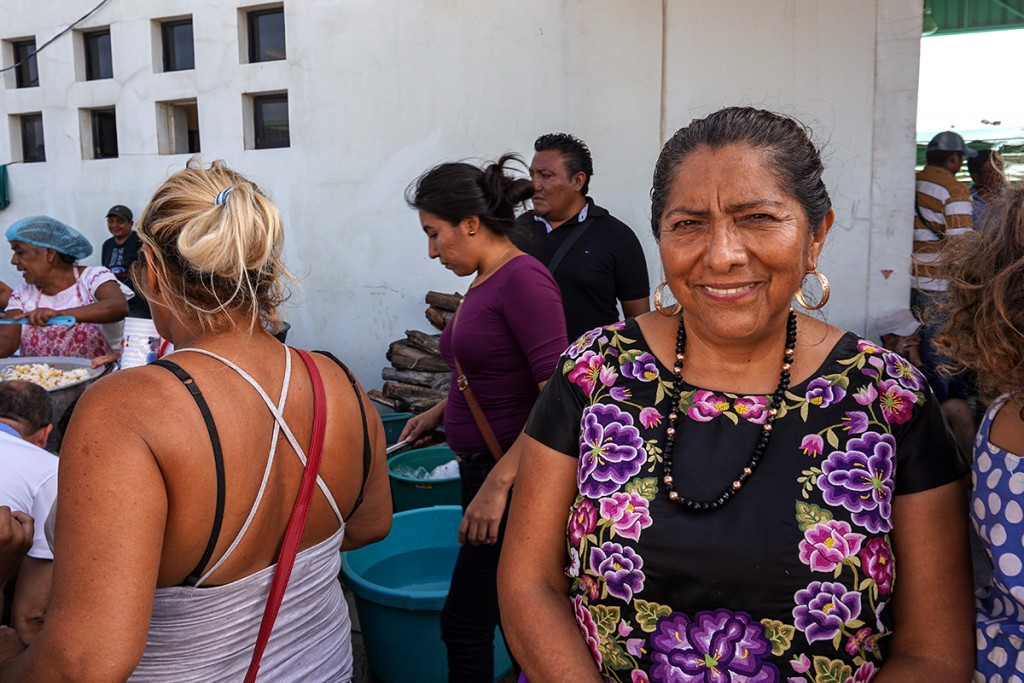 Gloria Sánchez López is the mayor of Juchitán de Zaragoza, where the caravan stopped in late October.

“We agreed to take action and to refurbish this space [for the caravan.] It was meant to be a bus terminal but couldn’t be completed as such. We cleaned it up. We set up a space for medical attention. We created a kitchen. We cleaned, so they could stay.

“[These are] men, women, children who have rights – the human rights of every being. If we can, we have to offer. We have to give something.

“We know there are other kinds of social issues, underlying problems where the solution lies elsewhere, in other levels of government. But we help in a more direct way. We help as humanely as possible.” 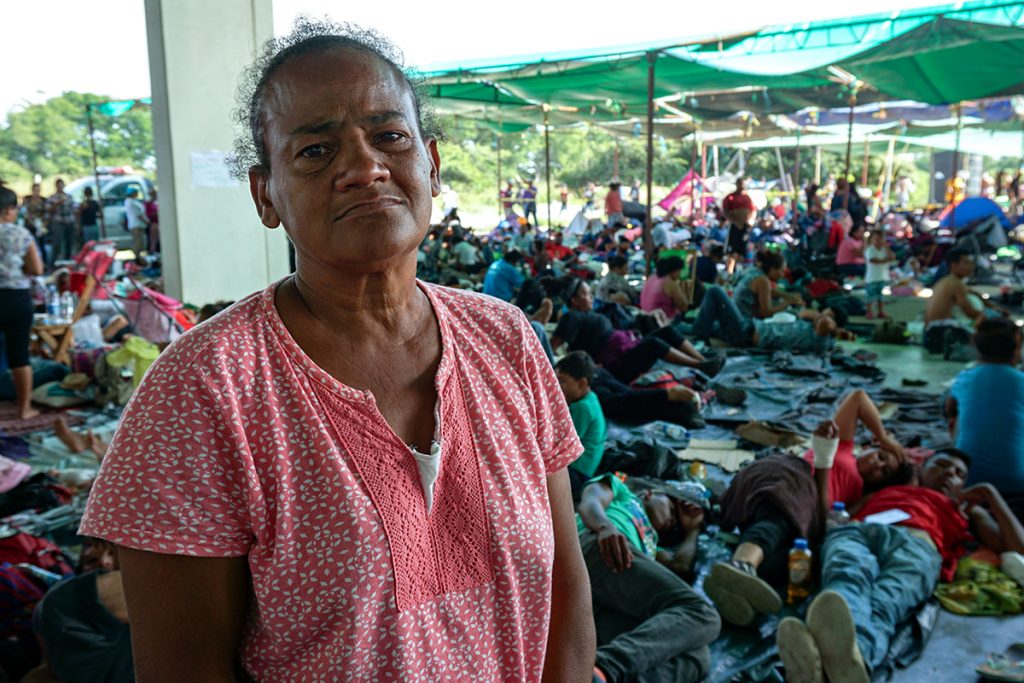 Sonia Dalia Gonzáles, 53, joined the caravan with her son and grandson in Honduras.

“My son and grandson were studying [in Honduras,] but I had to take them out [of school] because extortionists began following my son and then my grandson. Where my son went, he was followed.

“The authorities, they don’t do anything. They told me to … flee with my son. There is no support, no help for you.

“I came on Oct. 12. I have walked for a long time. I got sick in Guatemala, but I was helped there. In Chiapas, my feet were treated.

“I am old already, but my son and my grandson are just beginning to live.” 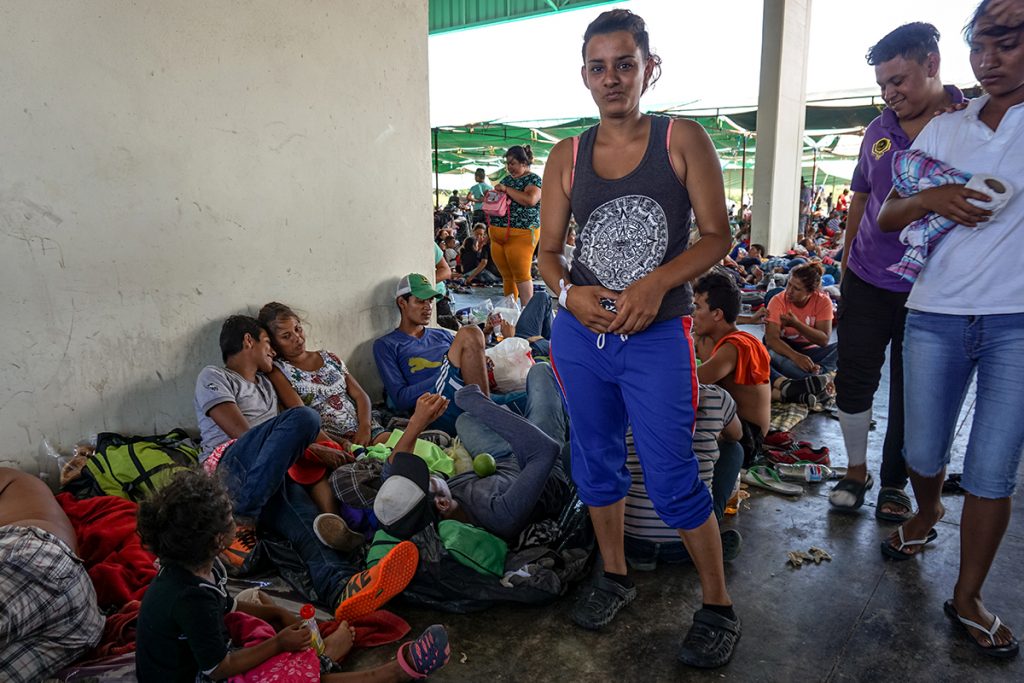 Jessica, 23, joined the caravan in Honduras. She asked that her last name not be used for safety reasons.

“All my friends came with the caravan.

“It’s been very tiring. I got dehydrated, and I spent a day in the hospital. I got out yesterday. I’m already feeling a little better.”