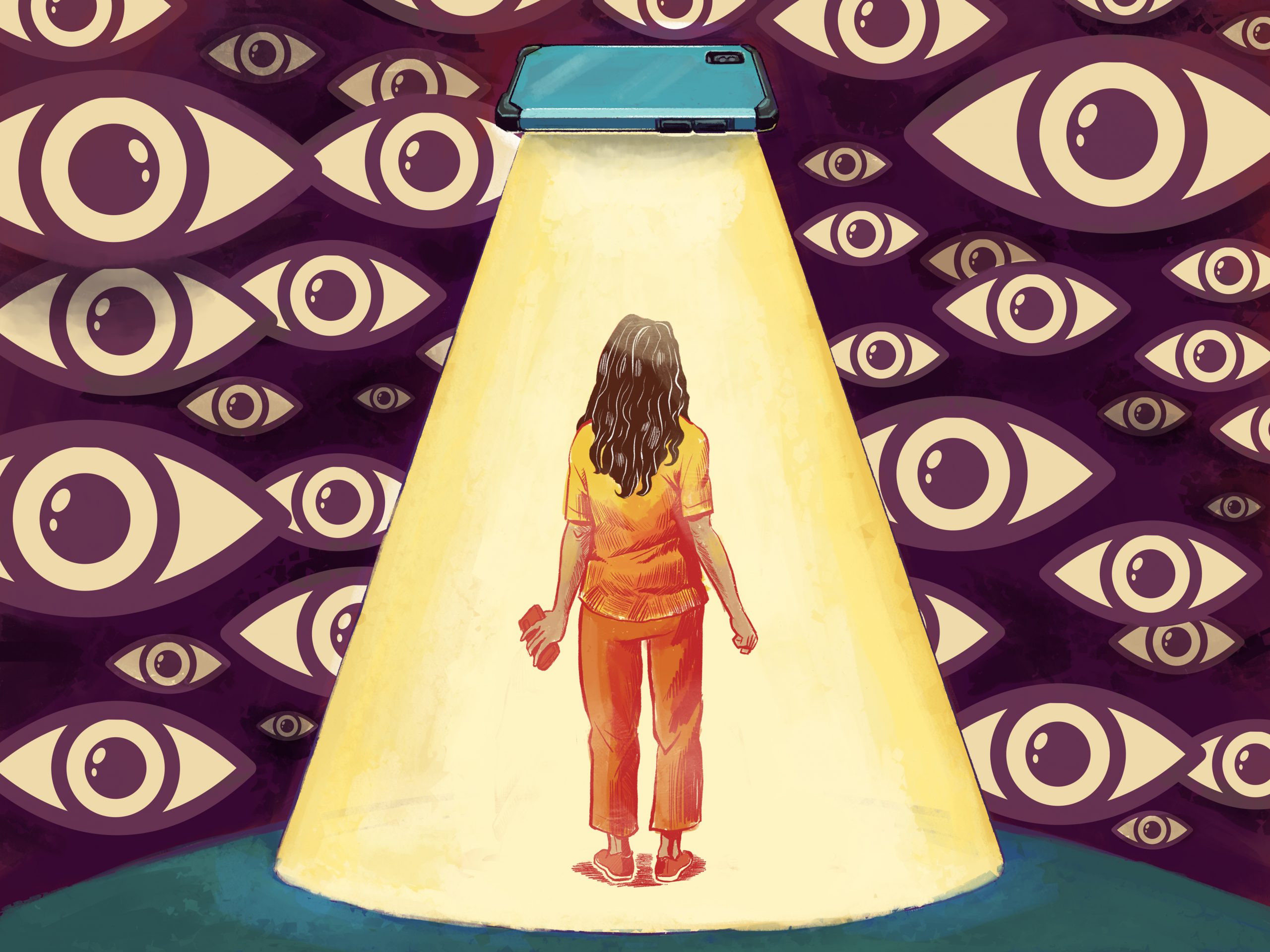 SAN CRISTÓBAL DE LAS CASAS, MEXICO — Viridiana was just buying a cellphone. The 24-year-old mother of two waited while the salesman migrated content to her new device. She thought nothing of it.

Then, when she returned to her home in San Cristóbal de Las Casas, about 900 kilometers (559 miles) southeast of Mexico City in the state of Chiapas, phone notifications told her she had “successfully shared” four photos – intimate images of her.

She thought, How did this happen? Who “shared” them? And with whom?

The salesman and his colleagues confessed, Viridiana says, but she didn’t know what to do. After initially shrugging it off, she hired a lawyer.

“I thought for sure they have done it to more women who didn’t realize it,” says Viridiana, who asked not to be fully identified to protect herself from undue stigma. “I want them to receive punishment so they know that if they do it again, there may be more consequences.”

Online violence in Mexico isn’t new. What is new is that women like Viridiana are doing something about it.

Cyberviolence has become the latest battleground in the fight for women’s rights in Mexico, as a storm of activism has provoked legal reforms that address what some experts say is a crisis long downplayed by police, judges and even women themselves.

“I want them to receive punishment so they know that if they do it again, there may be more consequences.” Viridiana

Violence against women in Mexico has drawn increasing public attention. Since 2015, recorded cases of femicides – in which girls and women are killed because of their gender – more than doubled, to 940 last year, according to government statistics.

Between 2019 and 2020, emergency calls – from both women and men – related to stalking or sexual harassment leaped by 12%, to 8,376. The violence against women fueled a series of protests, including an ongoing takeover of the National Human Rights Commission building in Mexico City. Protesters turned the site into a women’s shelter.

Attacks on women extend to the internet. According to Mexico’s National Institute of Statistics and Geography, about 9.4 million women suffered online harassment in 2019. A 2020 report by Luchadoras, a women’s rights organization, found that in cases of intimate images shared without consent, women are the target 84% of the time.

Another Luchadoras report, which looked at 2,143 cases since 2017, says prosecutors tend to drag cases out, some for more than three years. Only 17% of the cases initiated are resolved through judicial means.

Leading the charge for change are women like Olimpia Coral Melo Cruz, an activist from Puebla state who inspired Ley Olimpia, a package of reforms designed to recognize, prevent and punish digital violence. Twenty-eight states have signed on to the reforms, including Chiapas, Mexico’s southernmost state.

Melo Cruz herself suffered cyberviolence six years ago, after her then-partner posted a sex tape of her on the internet.

The video went viral. Melo Cruz locked herself in her house for months and attempted suicide three times.

“Maybe in this room there are girls on display who have thought about committing suicide, who have shared content. They know our faces, our bodies. Our bodies are not for fun on social networks.” 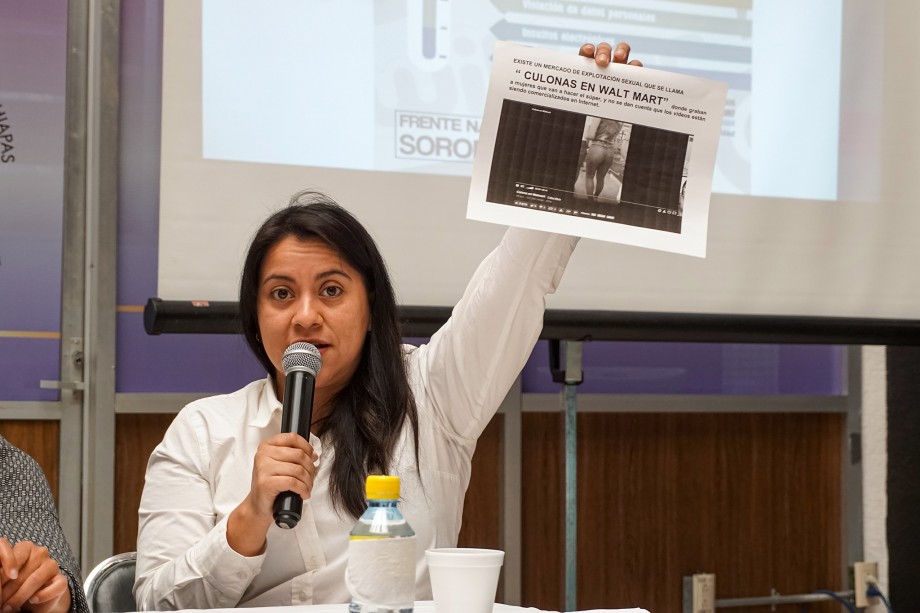 Olimpia Coral Melo Cruz speaks in February 2019 at a forum on digital violence and the law, held in the Chiapas state legislature. She has led a campaign to reform Mexico’s laws concerning cyberviolence.

At the time, the police in Puebla, about 700 kilometers (437 miles) northwest of Chiapas, didn’t have a category for such crimes. So they couldn’t charge her ex-partner.

With the support of women survivors and feminist collectives, Melo Cruz advocated for changes in the law.

In November, by an 87-0 vote, Mexico’s Senate approved Ley Olimpia amendments to the Federal Criminal Code and the General Law on Women’s Access to a Life Free of Violence. The amendments call for harsher penalties for digital harassment by a spouse, common-law partner or “any person with whom the victim has or has had a sentimental, affective or trust relationship.” Prison sentences will run from three to six years.

The Chamber of Deputies, Congress’ lower house, may follow suit this year. Then Ley Olimpia will become federal law.

In the last year, Puebla and other states have also amended their penal codes to “recognize digital violence and punish crimes that violate the sexual intimacy of people through digital media,” according to a summary by the Orden Jurídico Nacional, a government body that tracks and compiles laws and regulations.

In March 2019, the Chiapas legislature made it a crime to “publish, distribute or share” someone else’s intimate content without their consent.

Unauthorized sharing of sexual images or video once fell under other criminal categories, says Levi Francisco Pineda Rueda, inspector general of the cybercrime police at the Secretaría de Seguridad y Protección Ciudadana (Secretariat of Security and Citizen Protection). Making it a crime unto itself allows for increased legal penalties, Pineda says.

But some activists say the reforms fall short. They note, for example, that the laws still don’t make online threats a crime.

“Penalties are very low, from three to six years,” she says. “The process is quite slow. If the victim doesn’t insist, it is taken as lack of interest.”

Viridiana says her own case left her paralyzed. Her husband was out of town. She was frightened and confused.

The employees at the phone store urged her not to act, she says. They told her, “They’re just pictures.”

Her mother persuaded her. She told her daughter, “It’s not a game. It’s not a joke.”

She realized that “this is violence, that it is not right because I did not give my consent,” she says. “And I knew that I have to say what I feel and see how to get justice, and not just leave it at that.”