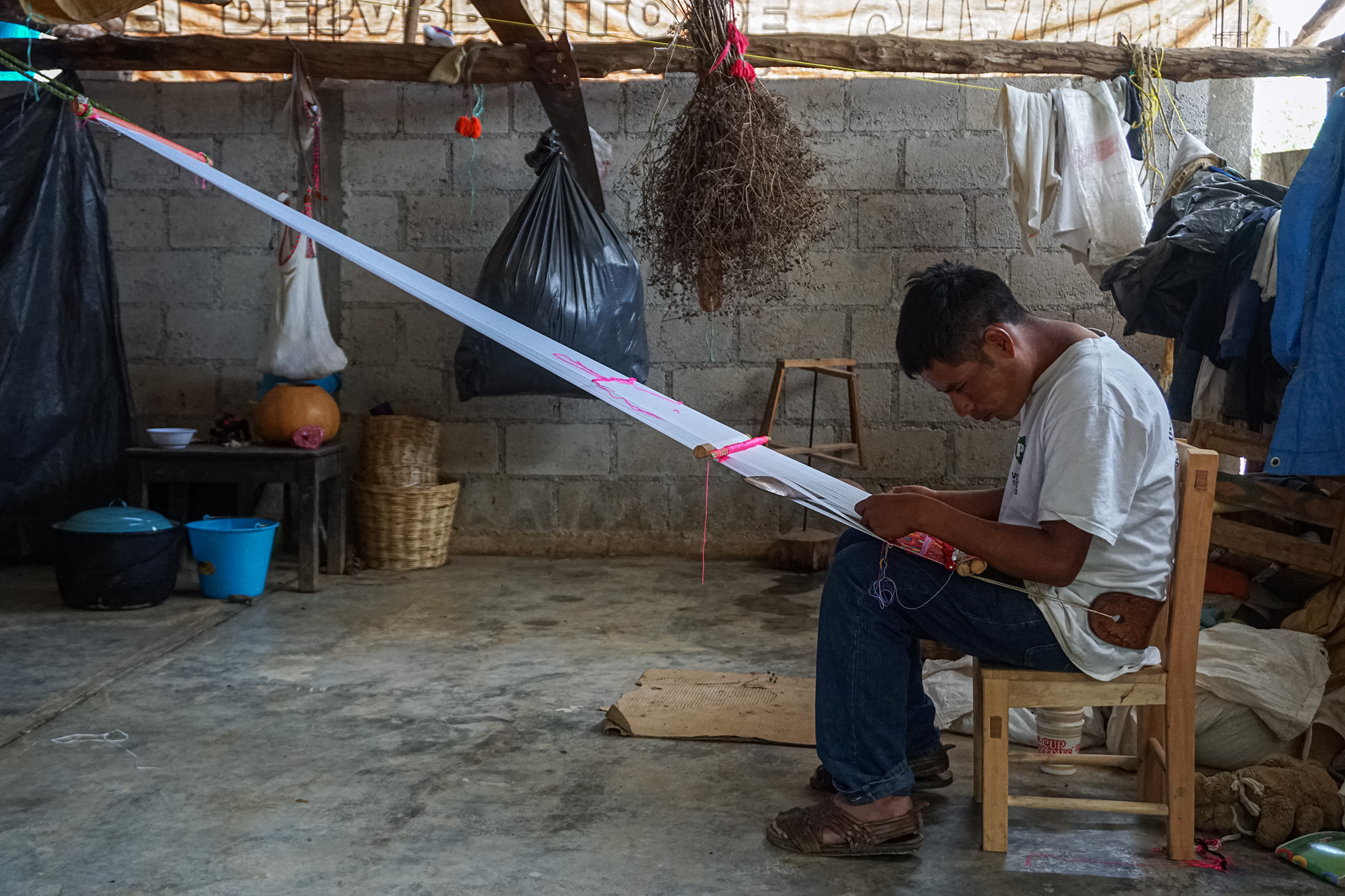 SAN CRISTÓBAL DE LAS CASAS, MEXICO — “I knew people were going to mock me,” Marcelino Santiz Pérez says. He is one of various men in Chiapas, Mexico, who weave, even though others see the job as women’s work.

“I had the courage to learn in order to support my family,” Santiz Pérez says.

Many families can’t access their farms because of armed conflict between the Chiapas municipalities of Chenalhó and Aldama. A ceasefire in June 2019 failed to bring the shooting to an end. With a land dispute dating back decades and more violent attacks over the past five years, men have broken with tradition and turned to weaving.

Weaving is integral to the endurance of Mayan heritage. Tsotsil and Tseltal women are seen as the owners and bearers of the tradition, which they pass on to women in each generation. As men become visible as weavers, the complex impact challenges gender roles – but also raises concerns as men occupy an important place for women. 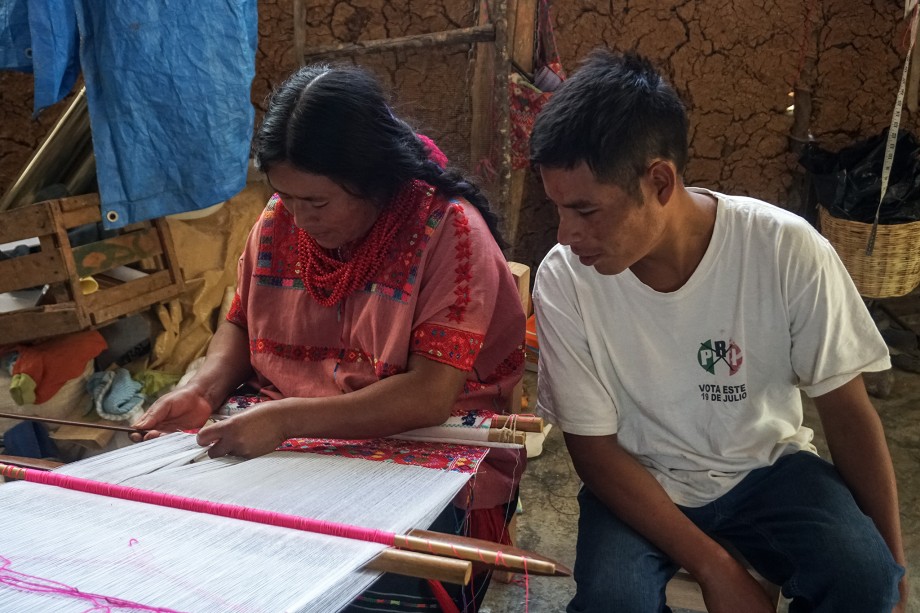 Marcelino Santiz Pérez and his wife, Antonia Santiz Ruíz weave. Unlike men, women tend to maintain their use of traditional clothing.

Santiz Pérez and his family lost their coffee plantations because the land was part of an invaded area. Now, only weaving and day labor keep them going. When there are weaving orders, Santiz Pérez helps, but when there aren’t, he has to head out and look for temporary work.

The territorial conflict between residents of Aldama and Chenalhó dates to agrarian reform in the 1970s, when the national government handed 60 hectares (148 acres) of land from ancestral owners in Aldama to Santa Martha, in Chenalhó. Since then, agreements have stipulated that Aldama’s ownership be respected, but Santa Martha hasn’t complied. Then, in February 2014, Aldama denied Santa Martha access to spring water in the disputed territory, and the people of Santa Martha responded by evicting families from the land. Over the years, this has been followed by destruction of fruit trees on the land, removal of families from their homes at gunpoint, and the burning down of homes.

Cristóbal Santiz, a resident of Aldama and no relation to Marcelino Santiz Pérez, says the local economy has been severely affected and many people have migrated to other states to take care of their families because they lost their crops. 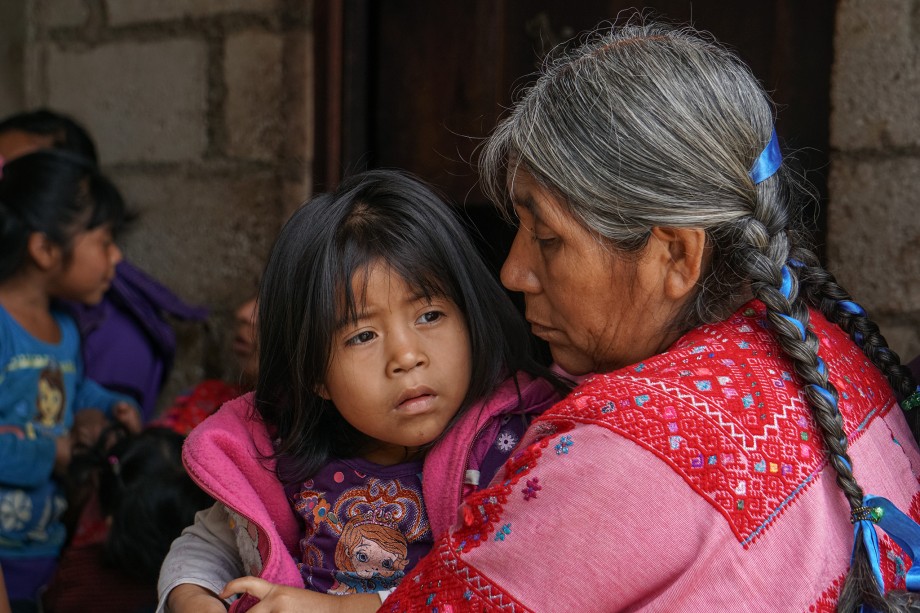 María Ruíz Santiz learned to weave at age 9. She was taught by her mother.

“For example, my coffee plantation is on the 60 hectares (148 acres). My corn field is in another community, and I haven’t been able to plant. It’s in Xuxch’en,” Santiz says, explaining that regular shooting makes it difficult to reach the fields.

His family uses a waist loom to weave cushion covers, napkins and huipils – a loose-fitting indigenous tunic used for both daily wear and ceremonies. They don’t have a storefront. Instead, their neighbors, friends and relatives in Aldama send them orders and sell for them.

Rosa Gómez Ruíz, from Aldama, learned to weave at age 6. By 14, she was making blouses, napkins and cushions.

“Until four years ago, only my sisters and my mom wove. But then my brothers wanted to learn, and now they already know how to use a waist loom,” Gómez Ruíz says. 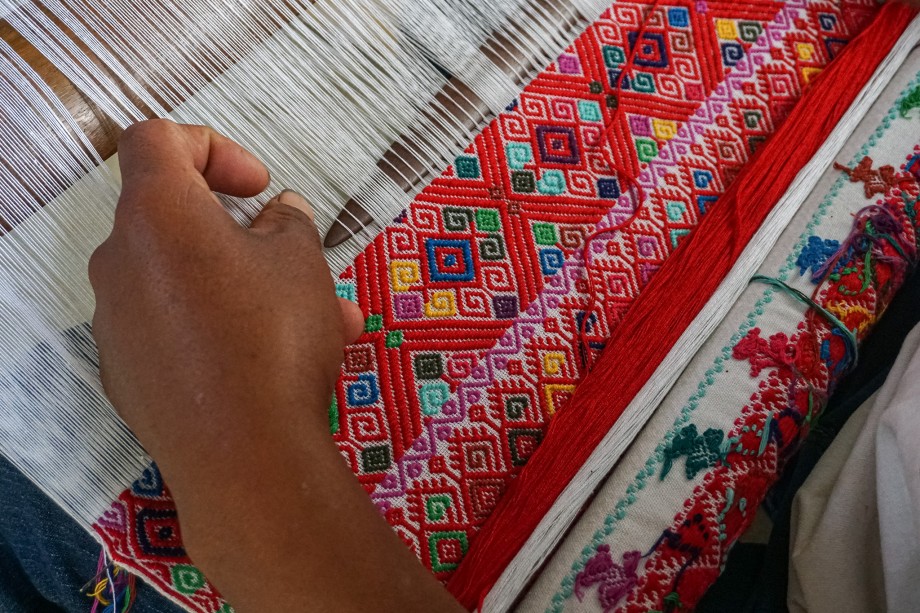 Weaving is vital to the endurance of Mayan heritage. Tsotsil and Tseltal women pass the tradition on to their daughters to keep it alive.

Her brothers work in the fields when they can, cleaning coffee and corn for people who contract them. They also work inside their homes on the waist looms. “They don’t want to work outside because they are embarrassed,” Gómez Ruíz says.

María Ruíz Santiz and her family support themselves by making handicrafts. They too used to plant coffee, but their land is near Santa Martha, and constant firing from armed civilians means they can’t work the plantation. She says her sons-in-law found the waist loom difficult at first, but with practice they got the hang of it and now enjoy weaving. But they prefer to weave at night, inside and out of sight.

Alberto López Gómez began to weave five years ago. “At 25 years old, I began to work the waist loom. Before, I was a farmer – I am a farmer. We were dedicated to coffee plantations, corn, beans, chilacayote, squash and beekeeping,” he says. “And then I changed my life, and now I’m a weaver, a craftsman.”

The economic situation caused by the conflict is far from resolved, as the two communities don’t agree on any proposals. 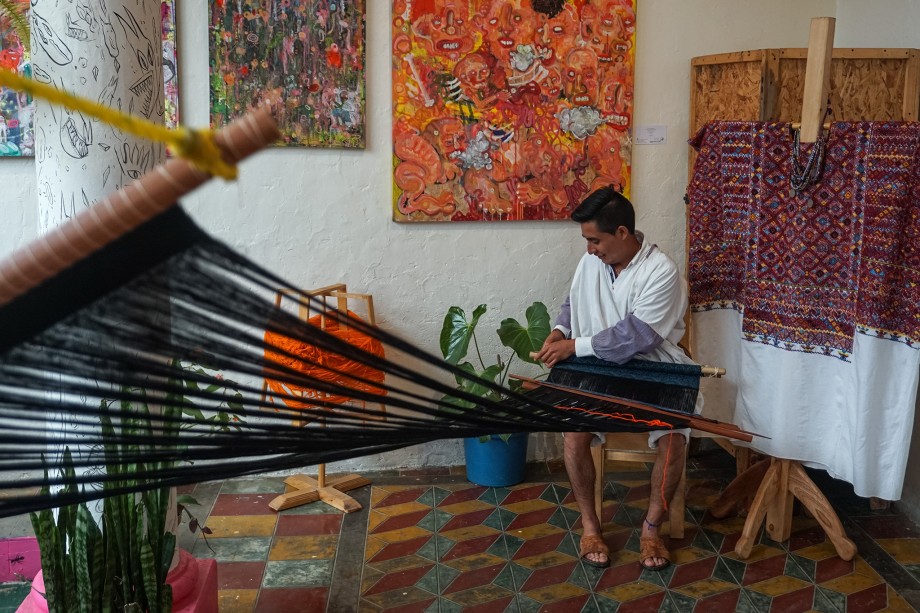 Most recently, the government proposed to hand over the 60 hectares (148 acres) to the state government for reforestation, and Aldama residents would receive 180 hectares (445 acres) in the municipality of Ixtapa – 50 kilometers (31 miles) away.

“The community members don’t accept it, because there are people who just have a piece of land of 25 by 25 meters (82 by 82 feet) or 25 by 50 meters (82 by 164 feet). Some have a hectare (2.5 acres),” Santiz Pérez says. He explains that their ancestors have lived on that land for years, and it doesn’t make sense for them to travel so far for such small plots of land.

In June 2019, a non-aggression agreement was signed in the state governmental palace between the residents of Aldama and Santa Martha, but tensions and violence have continued.

There has been ongoing shooting since June, Cristóbal Santiz says. People tried to access their coffee plantations, but they were shot at by residents of Santa Martha, Chenalhó.

Even on June 4, the day the agreement was signed, community members in Aldama reported that two shots were fired from a high-caliber weapon at the community of Xuxch’en, Aldama, Cristóbal Santiz says. 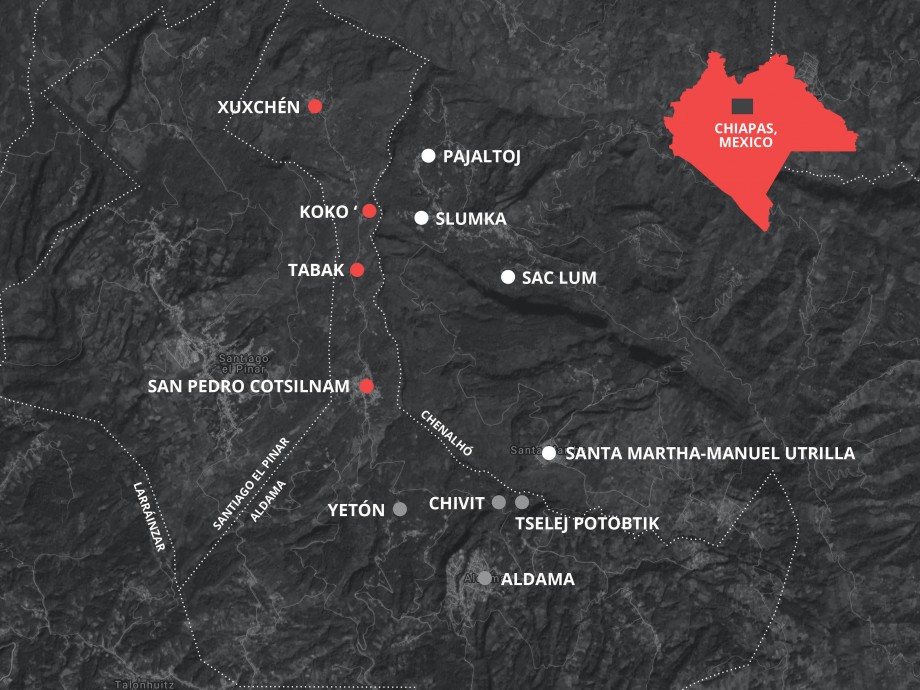 On July 27, Filiberto Pérez Pérez was shot and killed. He was with his family at his grandmother’s wake.

“A few moments ago, shots from a high-caliber weapon were fired from the distance-learning school in Santa Martha at the community of Tabak, Aldama. The injured person just died,” Cristóbal Santiz reported at the time.

Residents of Aldama say the attacks continued this month.