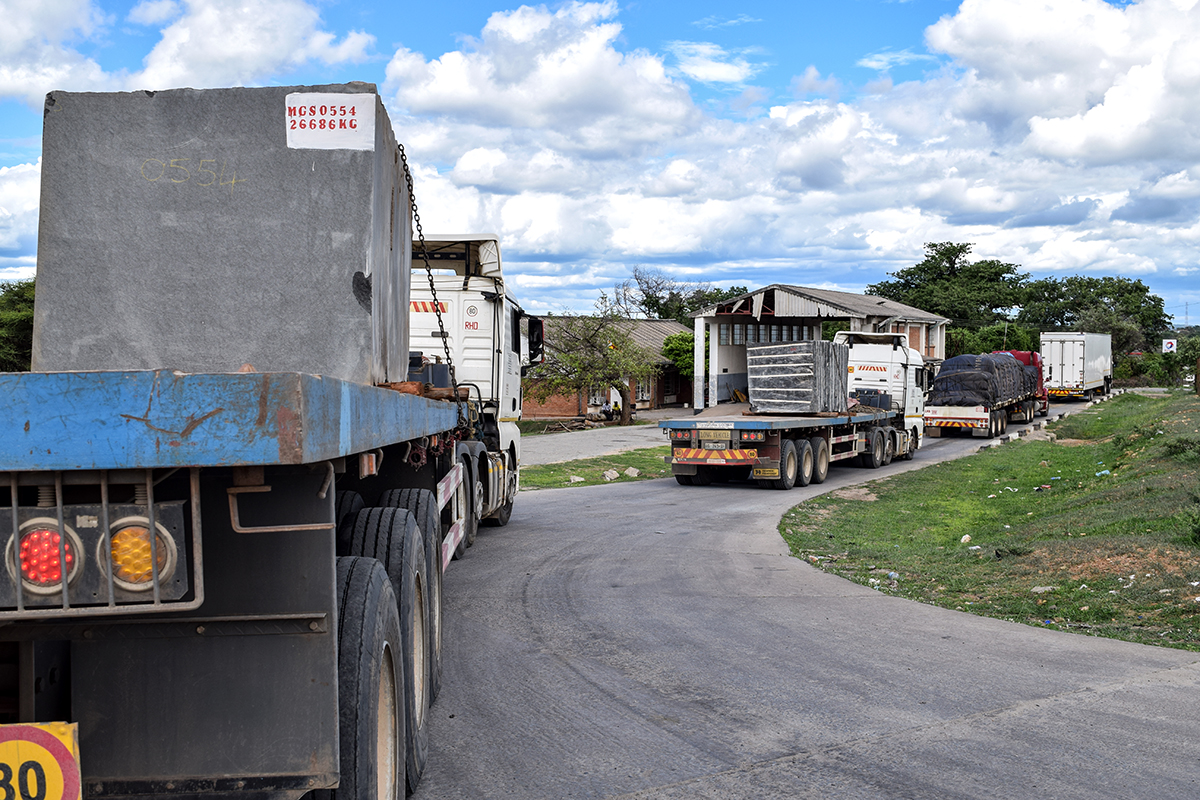 Loads of black granite are a near-constant sight here, where the stone is mined and loaded for transport to Mozambique’s Port of Beira. From there, most of it is shipped to wealthier nations for cutting and polishing, and then it is sold to builders, who prize it for countertops, floors, facades and more.

But as Zimbabwe’s government works to create a system that ensures that it benefits from all the gold and other resources extracted from beneath the earth’s surface, the miners and their communities receive only a small fraction of the value of their black granite. 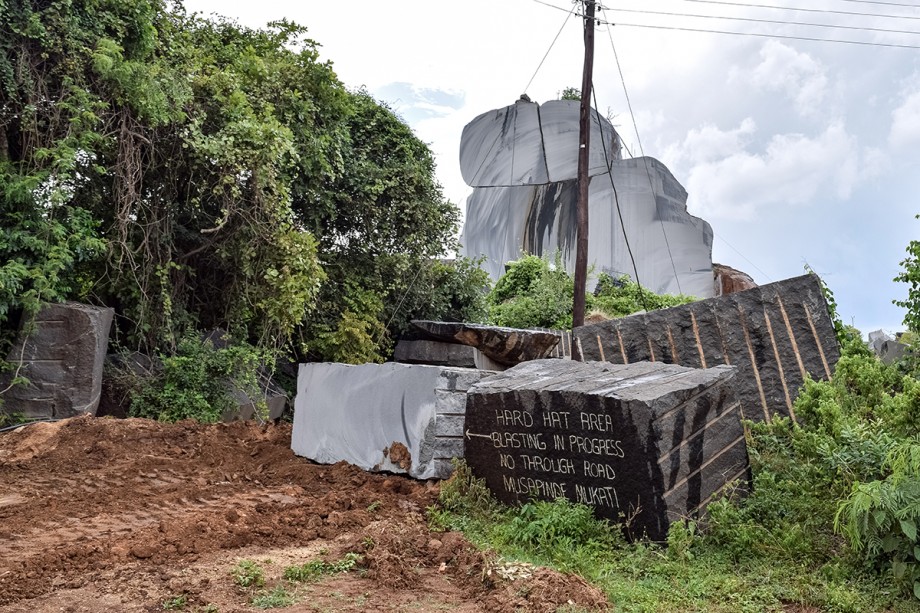 A giant boulder of granite is sliced in half by miners in Mutoko, a mining community in eastern Zimbabwe. Zimbabwe is a major producer of black granite and other varieties of the stone.

Most, if not all, of that stone is processed abroad, leaving Zimbabweans from these communities with a pittance compared to what the stone ultimately commands on the market.

And the companies that blast blocks of the stone from quarries – often companies not based in Zimbabwe – do more harm than good to local people and to their environment, people who live near the quarries say.

“We don’t see economic and social benefits,” says Peter Sigauke, chief executive officer of the Mutoko Rural District Council. “Black granite has been mined since 1972, [and] the mining companies are not building any infrastructure.”

Granite makes up 1.6 percent of Zimbabwe’s total exports, far below gold (32 percent of the country’s total exports) and raw tobacco (14 percent). In 2016, the country exported $45.5 million in granite, according to data collected by the Observatory of Economic Complexity at the Massachusetts Institute of Technology. Fifty-six percent of that granite goes to Mozambique, and the rest goes to Italy, Belgium, Spain and other countries. From there, black granite winds up all over the world, including in high-end buildings such as Denmark’s Royal Danish Library, the facade of which is built entirely from the stone. 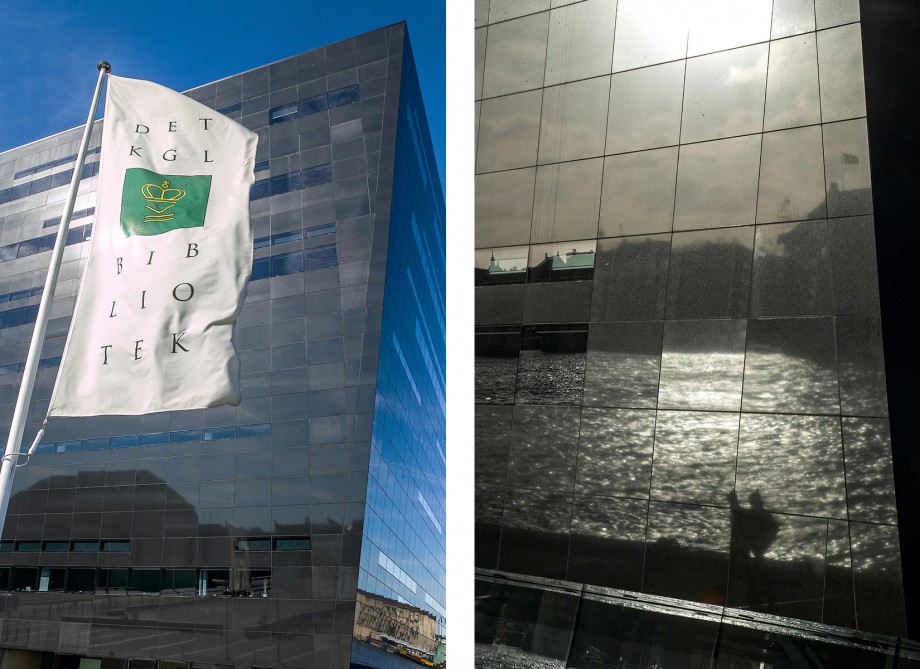 The Royal Library in Copenhagen, Denmark was built with black granite from Zimbabwe. It's just one of many examples of how the prized stone is used around the world, but people in the areas where the granite is mined say they earn very little the mining process.

Until late 2017, when long-time President Robert Mugabe was pushed from office, the government required that Zimbabweans hold at least 51 percent of the shares in every mining company operating in Zimbabwe, and at least 10 percent of those Zimbabwean-owned shares were to be given to local residents through what is known as the Community Share Ownership Trust.

But local people say that they don’t get what they’re owed from the trust.

The Mutoko Rural District Council tried in 2010 to get some of the unpaid revenues in court, but Ignatius Chombo, then Zimbabwe’s minister of local government, public works and national housing, instructed the council to withdraw the case in exchange for taking in $1 per metric ton, Sigauke says.

Before that incident, Sigauke says those companies paid the community 20 cents per metric ton as a development levy.

In the past, Sigauke says, that brought in between $160,000 and $200,000 each year, but that’s based only on proven exports. Sigauke says that one international company has exported granite for nearly two years without paying the development levy, by claiming that the granite slabs are samples that need to be tested. Sigauke declined to name that company.

“We are not located at the mines to verify the weights we are given by the miners,” Sigauke says. “We have no mechanism to ensure that that’s the correct production.” 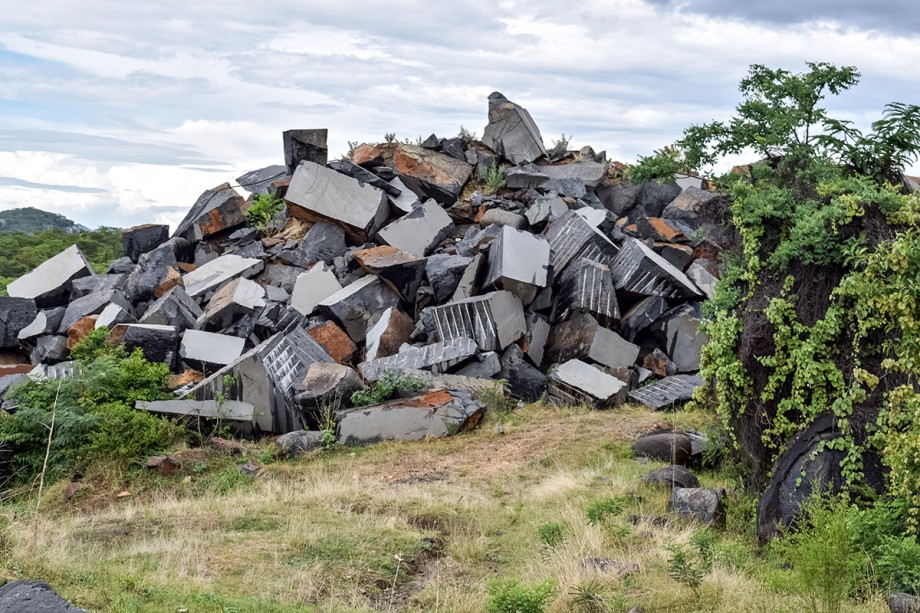 Granite that fractures during the mining process is discarded, because sellers require large slabs of the stone.

People in Mutoko say they don’t see any benefits from the granite. The area’s roads are mostly gravel, save for the commercial center, and even that section has just a few shops, a business center and fuel stations. Most of the area lacks electricity.

Not only does the community not benefit from granite mining, but the industry damages local roads, says Emmanuel Nyoka, a Mutoko resident.

Homes and other buildings in the area should showcase black granite, but they don’t, says Anna Tagwirei.

Other communities enjoy the granite, she says, but “our own community, where the granite is being mined, [is] not up to standard.”

Edward Muvuro, human resources manager for the Natural Stone Export Company, which has mined black granite for decades, says local people don’t know the full story of how the company aids the community.

He says that, in addition to employing local people – most of its 800 workers are from the area, he says – the company has pledged $1 million to the community. It has built schools and hospitals and is now building homes for teachers, Muvuro says. That’s on top of paying fees for a handful of academically gifted students at each school, he adds.

The company also has contributed another $1 million to various Community Share Ownership Trusts, he says. 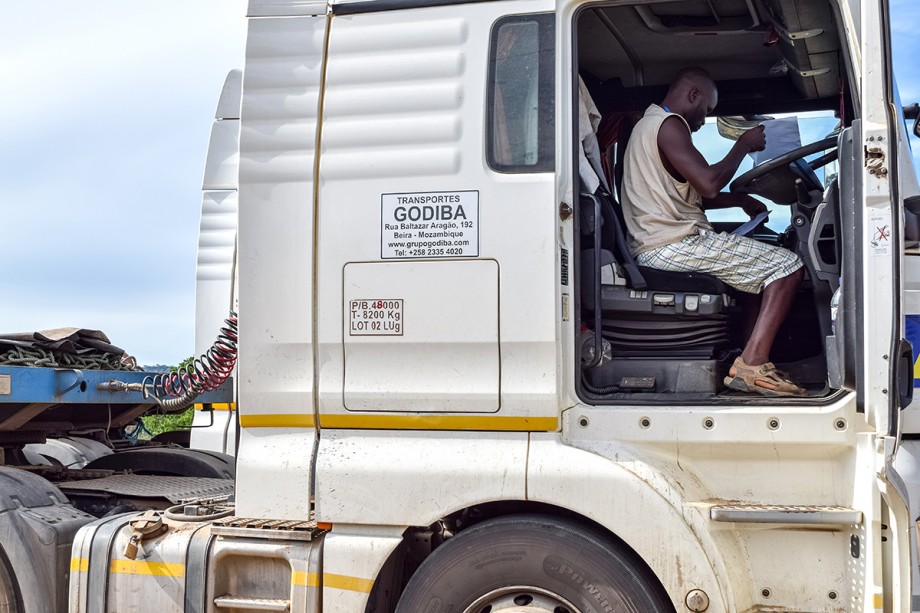 Benjamin Sabau prepares his documents to cross the border from Zimbabwe into Mozambique. Sabau, a Mozambican, has a contract to transport black granite that is exported from Zimbabwe.

Muvuro also downplays the value of the granite mined in Mutoko. Nearly all of it is exported in raw form, he says – a far cry from the polished, high-price version on display at the Royal Danish Library.

People buying the granite in Zimbabwe can expect to pay about $130 per square meter (about $12 per square foot).

This year, Zimbabwe’s Ministry of Finance and Economic Development instituted a 5-percent tax on the sale of all raw granite, to encourage the granite industry to process the stone in Zimbabwe. But buyers are wary of black granite that comes in any form but raw, Muvuro says, because some sellers use artificial hardeners, which can crack over time.

Sigauke says local authorities should be involved in the processing of permits so that, before mining begins, the authorities can carry out environmental impact assessments and ensure that contracts are brought before local councils.

“The first port of call before the ministry signs a permit should be the council,” he says.