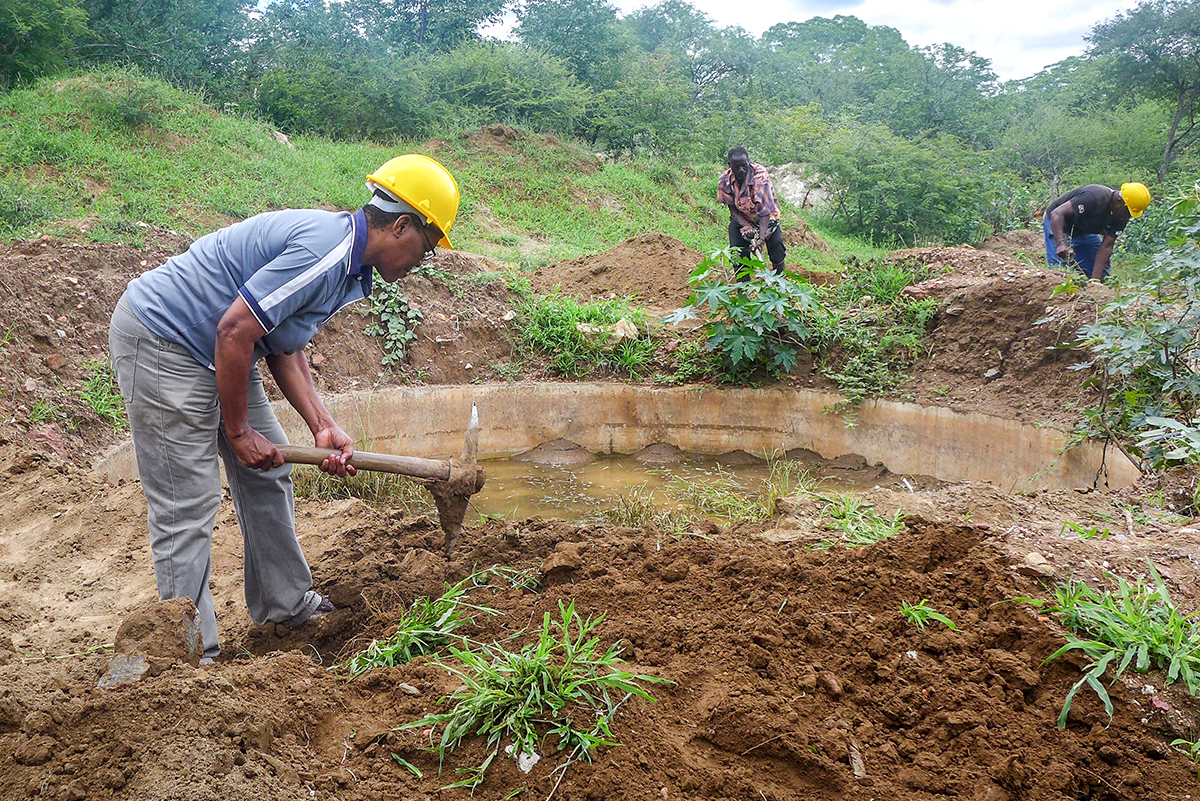 COLLEEN BAWN, ZIMBABWE — It’s a walk of nearly 2 miles to reach the mountainous area known locally as Ntabenisburg, where three men await Esther Lisimati, who runs the gold mining operation there. They’ve found a belt, the men say, and Lisimati is visibly excited.

INSIDE THE STORY: A GPJ reporter faces obstacles, suspicion while trying to cover women miners in Zimbabwe. Read the blog.

It’s moments like these that have earned Lisimati a life that is out of reach for most Zimbabweans. Her children have been educated at boarding schools and she owns property and a vehicle.

Lisimati’s success has come over more than a decade in the gold mining industry. Before 2004, Lisimati was a chicken breeder — a job she’s kept alongside her gold venture.

“One can make over $1,000 or nothing per month or nothing depending on the availability of the mineral,” she says.

Lisimati is a rare woman in Zimbabwe’s mining sector, but as the government pushes for increased gold production, even if by untrained independent miners and panners, more women are joining those ranks. 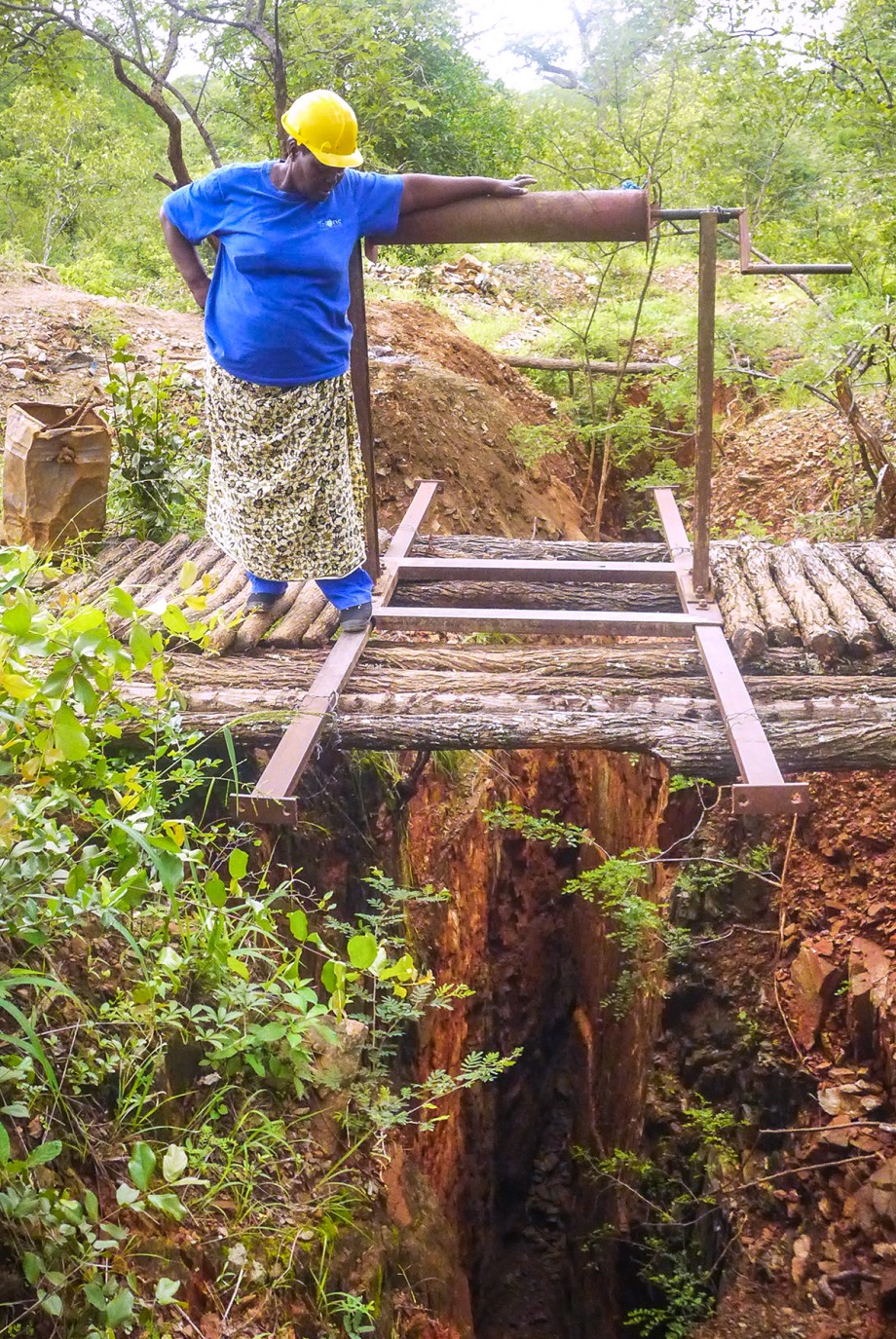 Esther Lisimati watches miners in a shaft where they recently spotted gold. Lisimati is one of a growing number of women who have gone into the gold mining business. She now employs a team of miners.

For many women, gold mining represents a chance to make real money.

“I am a copy typist by profession,” says Sithembile Ndlovu, a founding member of Mthandazo Women in Mining Association, a support organization that rents equipment out to its female miners. “I saw a few women working in the mining industry long back in the 1990s and they became my role models.”

She first tried her hand at gold mining in the early 2000s. She panned for four hours that first day and came home with 11 grams of gold, an amount worth at least $150 in today’s prices, depending on the metal’s purity.

“When [my husband] came back we had two times the groceries we often had in the house,” she says. “He was not keen on me getting in the industry until that day.”

Now, 15 men work for Ndlovu. Her claim covers a vast area near her homestead.

She drives a Nissan pickup truck and her husband has a Toyota version. The couple owns a modest home in their village plus a second home in town, both in the Colleen Bawn area.

The Ministry of Women’s Affairs, Gender and Community Development estimates that there are about 50,000 artisanal gold miners in Zimbabwe, 15 percent of whom are women. But a recent report by Pact Institute, a Washington, DC-based development nonprofit, noted that small-scale and artisanal mining provides a direct livelihood for more than 1 million people. Women could number up to a quarter-million of all artisanal and small-scale miners in Zimbabwe, that report notes.

Artisanal gold mining was illegal in Zimbabwe between 2006 and 2013, years that account for the bulk of Lisimati’s business. She says she had a license during those crackdown years, when the government worked to ensure that all of Zimbabwe’s gold would be sold by large, regulated gold mining operations to the government-run Fidelity Printers and Refiners, the only legal gold buyer in the country. That policy pushed much of the gold mined in Zimbabwe into the black market, and by early 2014 the government shifted strategies to both legalize artisanal and small-scale gold miners and lure them to sell to Fidelity Printers and Refiners. Now, large-scale mining operations pay royalties of 5 percent on all gold sold, but small-scale and artisanal miners pay just 1 percent, and there’s talk of eliminating royalties for those sellers entirely.

The 1961 Mines and Minerals Act regulates mining activities in Zimbabwe, but efforts are underway to overhaul the act to eliminate details that many see as vestiges of the colonial era. The act does not differentiate between small-scale or artisanal mining and large-scale or industrial mining, an oversight that was addressed in part by a 1991 amendment that empowered local authorities to regulate some small-scale mining activities and allowed independent gold mining efforts by black African workers.

Artisanal and small-scale mining was criminalized in 2006 as part of a government effort to ensure that all gold extracted in the country be sold to the government, but that policy only pushed illegally mined gold to the black market. In 2014, the government began issuing artisanal mining permits, free of charge, to anyone interested in selling gold to the government-run Fidelity Printers and Refiners, the only legal gold buyer in Zimbabwe.

All that gold mining has strained the environment and caused major safety issues. Independent gold miners and panners known locally as “makorokoza” dump contaminants, including mercury, into rivers and dig holes that interfere with the water’s natural flow. Children and livestock have fallen into abandoned mining holes. Irrigation systems have been neglected when local people join the gold rush, creating food shortages. (Read more about these problems here.)

The government doesn’t require gold miners to receive any special training before they dig for the mineral. Apolonia Munzverengi, president of the Zimbabwe Miners Federation, says her organization, in partnership with the Ministry of Mines and Mining Development, constantly educates small-scale miners on safety and mining rules and regulations.

“The risks in the small-scale sector are high because of the lack of mining-related education; going forward as the sector grows, we are capacitating ourselves to meet that demand,” she says.

Even so, Wellington Takavarasha, CEO of the Zimbabwe Miners Federation, says the Mines and Minerals Act, the law that regulates mining activities in Zimbabwe, is a “colonial legislation” that should be repealed because it does not support the work of small-scale miners.

The female gold miners, though few, show dedication to their work, help each other and have a track record of caring well for equipment, Moyo says.

Such success stories drew Thembie Nyathi, 53, to take up gold mining in December. She doesn’t have a claim of her own, but she works with other women in women-owned mines.  She picks through rubble in search of ore, of which she cedes 10 percent to the mine owner and takes the rest for herself. It’s hard, physical labor, but the potential payoffs keep her moving.

Soon, Nyathi hopes to own a claim of her own. 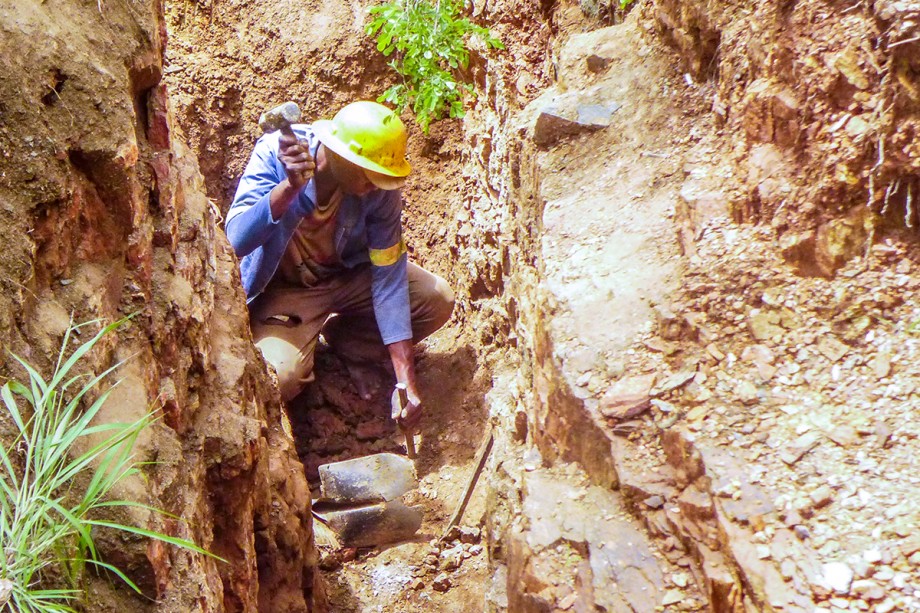 A miner works in Zimbabwe’s Colleen Bawn area. The government has lifted restrictions on artisanal and small-scale gold miners to boost the country’s gold production.