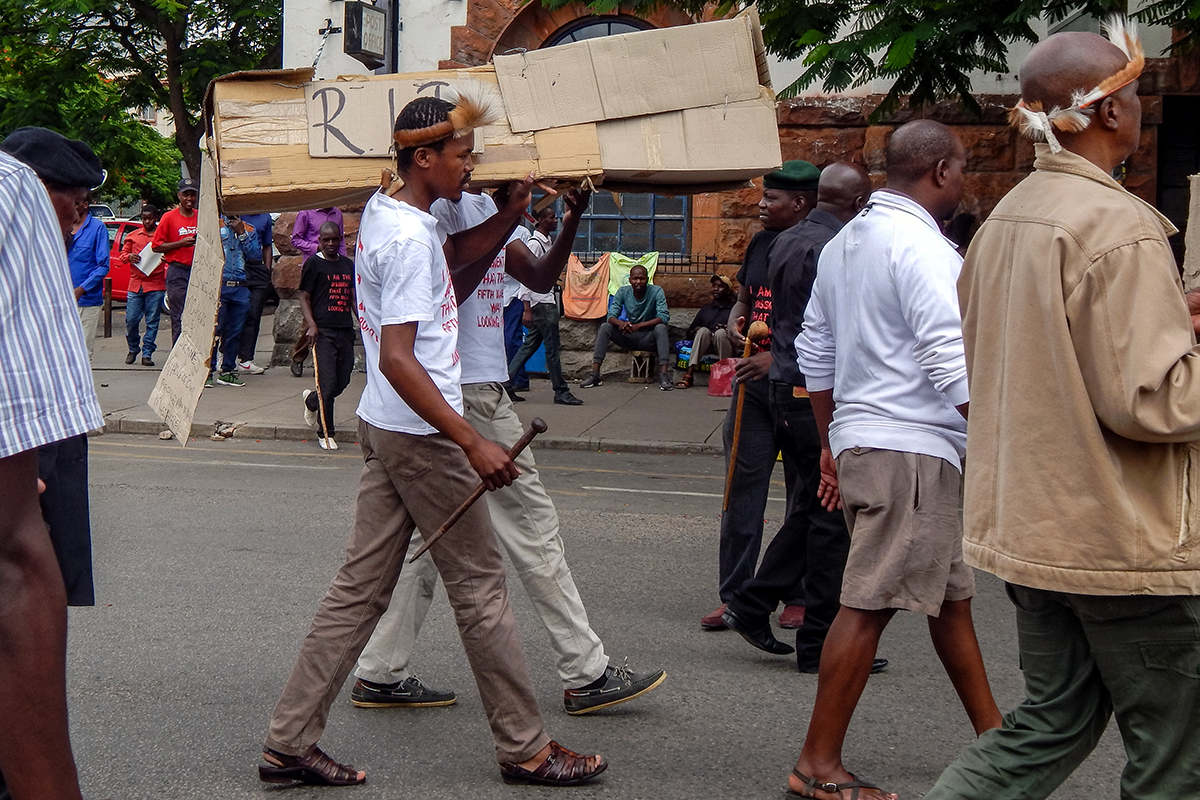 BULAWAYO, ZIMBABWE — Parton Xaba was in first grade in 1982, when a group called the Support Unit arrived in his village and methodically hunted down families thought to oppose Robert Mugabe, Zimbabwe’s longtime leader.

“I can still vividly see our neighbors’ homes go up in flames and remember the chill down my spine at the thought that our home could be next in line to be burned down,” Xaba says.

This is Xaba’s memory of one of the grisliest eras in modern Zimbabwean history. What he describes is just one of a series of massacres of Ndebele people, a minority group in Zimbabwe’s Matabeleland, that occurred in the 1980s, during Mugabe’s early years in power. The massacres are known today by the name Gukurahundi.

Gukurahundi is a Shona word that, loosely translated, means “the early rain that washes away the chaff before the spring rains.”

Estimates vary on the number of people who died during the massacres, including Ndebele people thought to oppose Mugabe, but many analyses conclude that 20,000 or more died, and many more were tortured, raped or assaulted.

There are many in Matabeleland who remember those crimes in vivid detail. Even so, they were largely unable to discuss what happened publicly while Mugabe was in power.

But the government’s tone changed after Emmerson Mnangagwa became president, even though Mnangagwa, Mugabe’s right-hand man for decades, is widely believed to have had a hand in Gukurahundi.

“I talked about Gukurahundi during Mugabe’s time, and I was threatened,” says Zenzele Ndebele, a film producer.

Ndebele produced a documentary about Gukurahundi, which premiered nearly a year after Mugabe was pushed from office. There’s still pressure to keep quiet, he says, but it’s not the same level of intimidation.

“The difference is that now we have more people talking about it, and the current government is desperate for international recognition,” Ndebele says.

I can still vividly see our neighbors’ homes go up in flames and remember the chill down my spine at the thought that our home could be next in line to be burned down.Parton Xaba, who was in first grade in 1982

Mnangagwa inherited a government widely accused of human rights abuses, election tampering and corruption – charges that have kept many nations from engaging in trade and other profitable partnerships with Zimbabwe.

It’s not yet clear whether the current administration’s apparent willingness to allow discussion of Gukurahundi will result in any real justice.

“Generally, the current regime has opened up space within the media for citizens to express themselves with some degree of freedom,” says Thomas Sithole, a political analyst. “Gukurahundi is one of the issues.”

But the government still doesn’t take kindly to public accusations related to Gukurahundi, he says.

The National Peace and Reconciliation Commission, formed by Zimbabwe’s 2013 constitution to pursue “post-conflict justice and healing,” was largely toothless when Mugabe was in power. Some Zimbabweans hope it will become a powerful advocate for those who lived through Gukurahundi as well as for the memories of those who died, but its activities have been tainted by accusations that it isn’t serious about conflict resolution.

The commission is comprised mostly of Shona-speaking people, Xaba says.

Some Zimbabweans say there’s been too much emphasis on whether it was Ndebele people who were attacked by the Shona-majority government.

Admire Kudita, a Shona speaker raised in Zimbabwe’s eastern highlands, where large Ndebele communities are based, notes that the Fifth Brigade targeted anyone who supported a political party other than Mugabe’s.

“It’s important that people first identify the perpetrators, which is ZANU-PF,” Kudita says.

Not every Shona person is complicit, he says.

Zimbabweans are divided on whether there should be a hard investigation into the human rights abuses that have occurred in the country. A 2011 survey published by the Journal of Modern African Studies found that 55 percent of Zimbabweans believe that the truth should be investigated and made public, while 43 percent say it’s best to forget the past. In Matebeleland, where Gukurahundi and other human rights abuses have taken place, 30 percent of those surveyed want no investigation into past crimes – a rate more than double the national average of 14 percent.

The researchers who published that survey posited that some in that region might assume that a major government overhaul is necessary before justice can truly be served. They also noted that many there, because they directly experienced Gukurahundi, are unlikely to offer honest responses to an unfamiliar person.

The difference is that now we have more people talking about it, and the current government is desperate for international recognition.Zenzele Ndebele, a film producer

Even while many in Matebeleland aren’t inclined to seek a formal investigation into Gukurahundi, those who survived it have vivid memories of the atrocities that occurred.

“The first time I saw the Fifth Brigade was when they arrived at our school in Gwanda in 1983, and I was in grade three,” says Njabulo Ngwenya, referring to the military unit that carried out the massacres. “They were wearing red berets, and they rounded up the older students and began beating them.”

Ngwenya says some Fifth Brigade members forced him to kill his puppy using a burning firewood log, because the dog barked when they visited his home.

Ngwenya’s story is in line with what a handful of people who remember Gukurahundi say they experienced. The violence was overwhelming.

“The first time I saw a dead body was when we were called to the police station one day, where we found a man, said to be a dissident, who had a bullet hole in his head,” Xaba says.

“We were told to identify him. It was a horrible experience.”

Xaba says his family survived Gukurahundi because his father had two political party cards, one of which was for ZANU-PF.

“When the need arose, he would produce the appropriate card, to protect us,” says Xaba.

A year ago, Xaba’s words might have landed him in hot water with local police. He’s bold enough to say them now, given the changes in the government’s willingness to talk about Gukurahundi, but many Zimbabweans remain wary.

“People can talk about Gukurahundi, but authorities are still uncomfortable about letting people discuss the subject,” says Lulu Brenda Harris, a resident of Bulawayo, the major city anchoring Matabeleland. “They try to clamp down on anyone who does.”