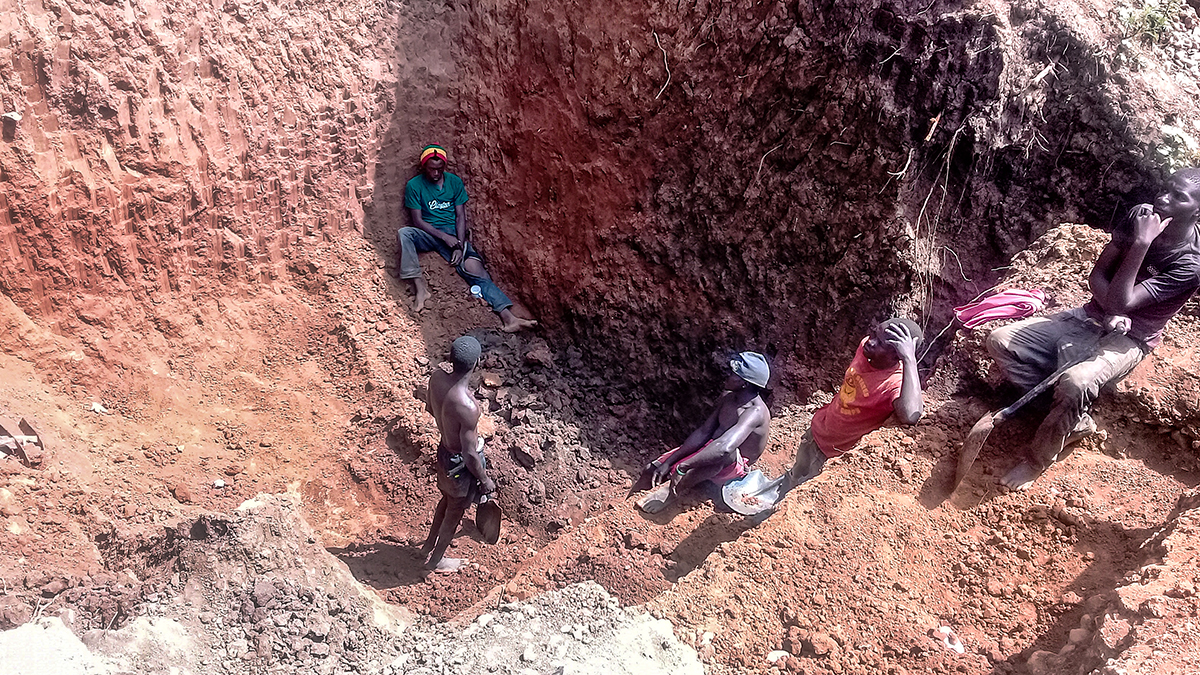 MUTARE, ZIMBABWE — Eight years into her small business, E.M. is a success story. The widowed mother strode into what was, at the time, considered a man’s industry – gold mining – and by 2016 had earned public accolades from the Reserve Bank of Zimbabwe, which manages the country’s gold wealth.

Now, nearly two dozen people work at her mill, she says, including a full-time management team. She asked that her identity be protected because of crimes against people who are successful in the gold-mining industry.

Cash is hard to come by in this country’s ravaged economy, but people in the gold-mining sector believe they have increasing options for getting funding for their work, particularly if they work on their own – a practice known as artisanal mining – or run a small business.

China has poured many millions of dollars into the country to support artisanal miners and small mining businesses, the Zimbabwean government says, and the state continually announces funds of $20 million, $40 million, $100 million or more for grants and loans.

But it is difficult to track exact details about those funds, including exactly where the money came from, if it came in at all, and whether it’s actually reaching miners in any form. Global Press Journal’s multiple requests in person and via email for information from the Ministry of Mines and Mining Development were met with continual referrals from one official to another.

Miners who have a record of selling gold to Fidelity Printers and Refiners, the gold-buying arm of the Reserve Bank of Zimbabwe, are eligible to apply for funding. And these days, miners can sell any amount of gold, however small, to Fidelity Printers and Refiners, giving people a huge incentive to dig for even a tiny bit of the metal. That change was made to keep gold from seeping into the black market.

China has poured many millions of dollars into the country to support artisanal miners and small mining businesses.

Miners, in turn, are producing more than ever before, nearly outpacing the country’s large gold-mining operations that once dominated the market. The environment is suffering (read our story here), but the government continues to encourage mining. Now, it’s estimated that more than 1 million people – out of a total national population of 16 million – earn a direct livelihood from small-scale and artisanal gold mining. Many scrape by on infinitesimal finds, but with a few people making real money and the potential of qualifying for a grant or loan on the merit of finding any gold at all, the optimism is contagious.

E.M. says her business qualifies for a loan of up to a $25,000, based on her gold deliveries, but her experience is one example of the government’s opacity. She told GPJ in July 2017 that she applied for her maximum loan amount with confidence that she’d get at least a portion of it. But in late 2017 she told GPJ that she withdrew her application because the process was taking so long.

Fidelity Printers and Refiners did not respond to GPJ’s multiple requests for information on the number of people who have received grants and loans.

It’s not entirely clear exactly how much the Chinese government has invested in Zimbabwe’s mining sector. Independent efforts to track official Chinese gifts, loans and other funds sent to Zimbabwe reveal a range of priorities, including donations of food and medical supplies, technical assistance, funding for cultural events and other types of aid. The AidData research lab at William & Mary, a university in the U.S., published a data set showing that China’s total official commitments to Zimbabwe between 2000 and 2014 totaled more than $6 billion.

American Enterprise Institute, which similarly tracks Chinese funds, reports that China invested $9.56 billion in Zimbabwe between 2005 and 2017 – about $9 billion of which came in the last six years of that period. By comparison, China invested $18.9 billion in Kenya and about $44.78 billion in Nigeria during those years.

But the reality on the ground is difficult to track. It’s common for a country to announce that the Chinese government has invested a certain amount of money, while the official Chinese statement simply noted that it was willing to invest – not that any money had actually come through.

“The Chinese will say, ‘We’ll create a fund, or we have a fund where you can draw up to X amount,’ and this will be reported by the host government as, ‘We just got X,’ but that’s not exactly what happened,” says Derek Scissors, a resident scholar at American Enterprise Institute who tracks Chinese investments around the world. “The real story is, if you jump through hoops, you might get x over time.”

Both Zimbabwe and China have notoriously opaque governments. Former Zimbabwean President Robert Mugabe’s longstanding “Look East” policy focused efforts on a China-Zimbabwe partnership, but the past few years saw an erosion of that good faith. In 2017, Mugabe was widely reported as having lashed out at Chinese-owned diamond-mining firms, saying that they had cheated him and the Zimbabwean people out of profits from the gems. Many analysts believe that the Chinese government masterminded the bloodless coup that led to Mugabe’s ouster in November. Zimbabwe’s new president, Emmerson Mnangagwa, is widely viewed as having close ties with Beijing.

At the 2018 World Economic Forum, Mnangagwa proclaimed Zimbabwe to be “now open for business,” echoing an invitation for foreign investment that he’s publicly made multiple times in recent months.

About 6 percent of Zimbabweans earn a direct livelihood from small-scale and artisanal gold mining.

On a global level, Zimbabwe is a bit player in the gold industry, accounting for $850 million in gold exports – just 0.3 percent of global exports totalling $288 billion, according to the Observatory of Economic Complexity, a project at the Massachusetts Institute of Technology.

China exported $1.23 billion – about 0.4 percent of the global total – in gold in 2016, but the country was the second-largest importer of gold that same year, taking in 18 percent of the total share.

In one example, the National Miners’ Association of Zimbabwe, which represents small-scale miners, in 2010 received a $10-million grant from China so local people could start their own mining companies, according to AidData.

In March 2017, the Reserve Bank of Zimbabwe announced that it was creating a $15-million revolving fund for businesses owned or managed by women, including those in the gold-mining sector. It’s not clear whether that money comes from a foreign government; Zimbabwe government officials did not respond to specific requests for comment about that fund.

And in April 2017, Fred Moyo, then the deputy Minister of Mines and Mining development, told small-scale miners at a breakfast meeting in Mutare, that the government intended to increase efforts to ensure that the miners could produce as much gold as possible.

He also noted that in 2016, Fidelity Printers had disbursed more than $9 million of a $20-million loan fund meant to support small-scale miners.

GPJ could not track down any recipients of those loans.

Like most people in the artisanal and small-scale mining sector, E.M. has no formal training in the industry. It’s an expensive business, she says, especially for millers, who process raw ore, separating the gold from other substances.

Her milling license costs $5,000 per year, she says. The Environmental Management Agency takes $750 per quarter, and the local Rural District Council gets $1,000 per year, among other fees and costs.

But E.M. says her business is growing continuously.

“I have put systems in place such that even when I am not on the ground, I know business goes on smoothly,” she says.