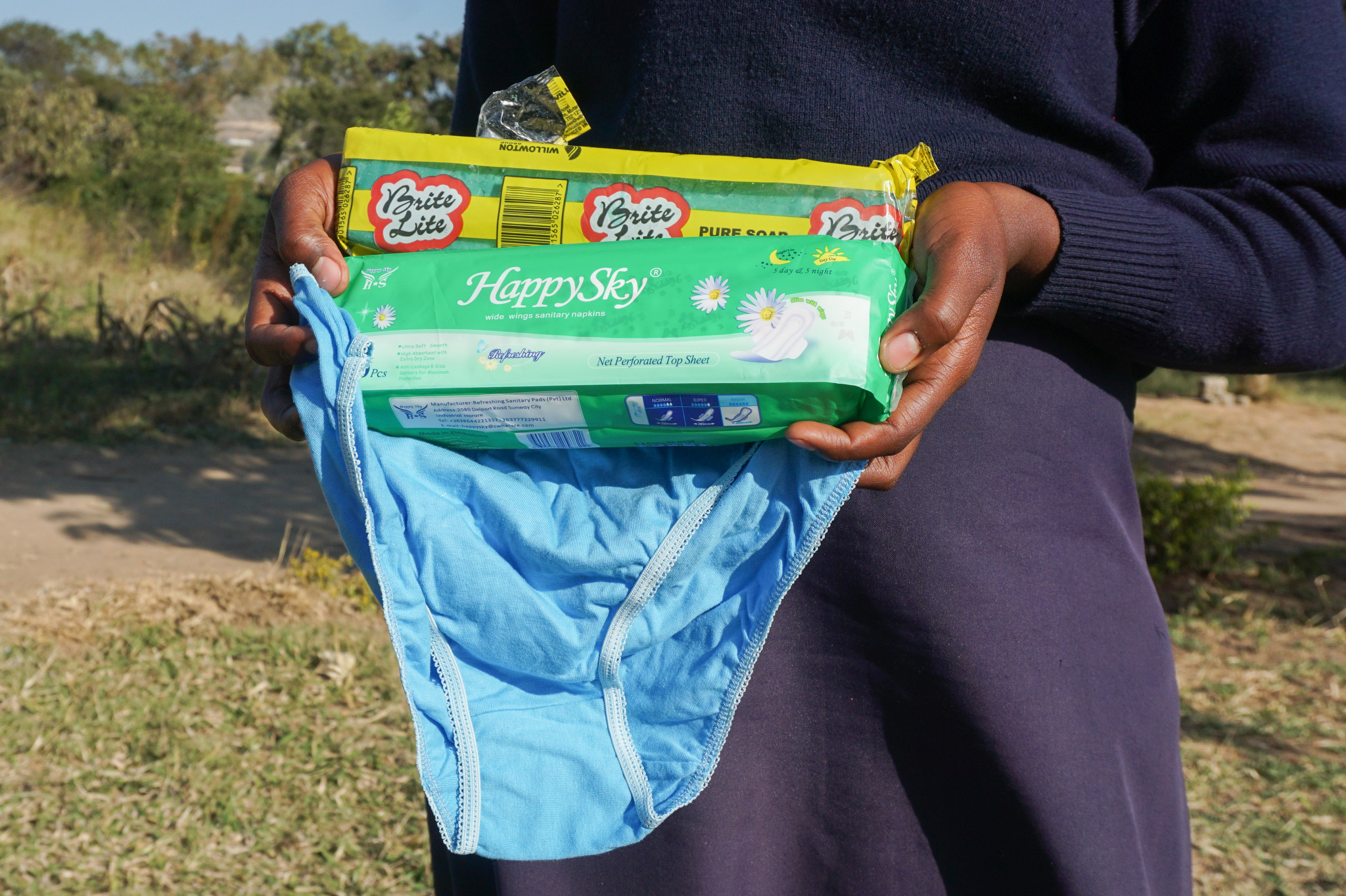 MUTARE, ZIMBABWE — If a girl has enough money to buy three disposable sanitary pads, but she needs at least eight, how many days of school will she miss when she gets her period?

These types of calculations, learned in restrooms rather than in math classes, used to test Chartley Karuru and her friends at Nyamauru High School every month. The most common solution was to try to make their disposable pads last longer, at the risk of embarrassing accidents or potential infections.

“I would have to either extend time with one pad beyond time of changing, which is very uncomfortable, as I could not go back to my mother and ask her for more pads as the budget wouldn’t allow,” says 15-year-old Chartley.

Disposable sanitary pads are a luxury item for many in Zimbabwe, costing about $4 for a one-month supply. For women and girls who can’t afford this option, traditional methods include using old pieces of cloth, newspapers, leaves and an absorbent paste made of cow dung — while also staying home several days a month to avoid the shame of a potential leak.

This can lead some girls to miss three or more days of schooling a month and leave them at an economic and social disadvantage compared with boys. Government officials are seeking to tackle the issue, which occurs worldwide. Zimbabwe’s 2020 Education Amendment Act offers free menstrual health kits in primary and secondary schools. Mthuli Ncube, the minister of finance and economic development, in 2021 approved the allocation of the 500 million Zimbabwean dollars ($1.3 million) needed to fund the program. But it’s faced funding issues and challenges in ensuring access to those who need it most.

The pandemic and inflation have delayed the program’s implementation, says Taungana Ndoro, spokesperson for the Ministry of Primary and Secondary Education. But the country’s 2,584 secondary schools are on track to receive their initial allotments this month, he says. “Some schools have already received, and others will receive this term.” 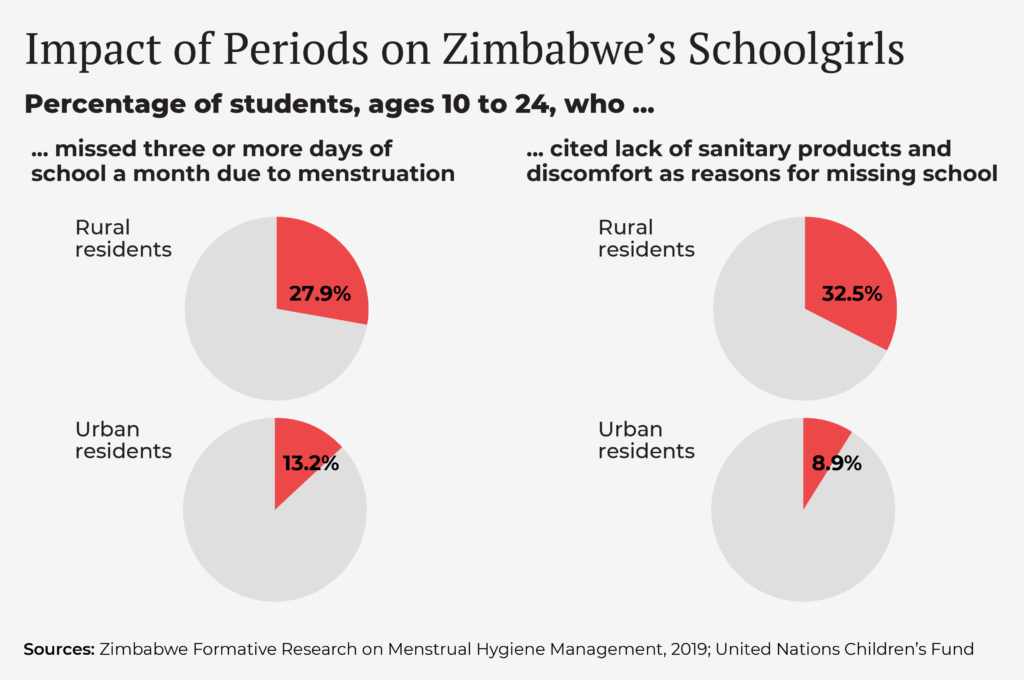 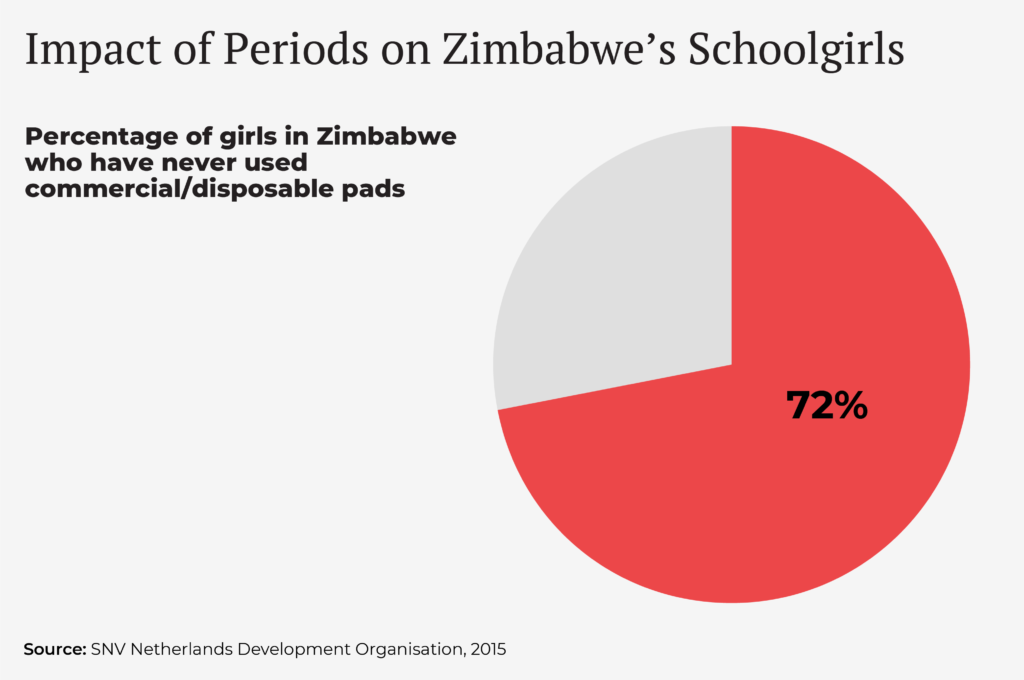 In a rural part of the country, Chiedza, 16, from Mutasa in the province of Manicaland, who prefers not to use her full name due to the stigma she feels about this issue, says she hasn’t heard about this program yet but hopes that it will solve her monthly dilemma.

When she started menstruating at age 13, with no money for pads, she used a piece of a worn-out blanket under her clothing to absorb the blood — but when she got to school that day, the blanket piece had slipped out of position.

“The teacher asked me to write something on the board. I stood up and as I walked to the front, everyone burst into laughter. That is when I realized I had stained my skirt,” she says.

She has tried other methods used by fellow villagers over the years, but none has left her confident enough to attend school during that time of the month — a loss of more than 100 school days so far.

“I cannot risk another mishap, so I would rather stay at home until after my periods,” she says. 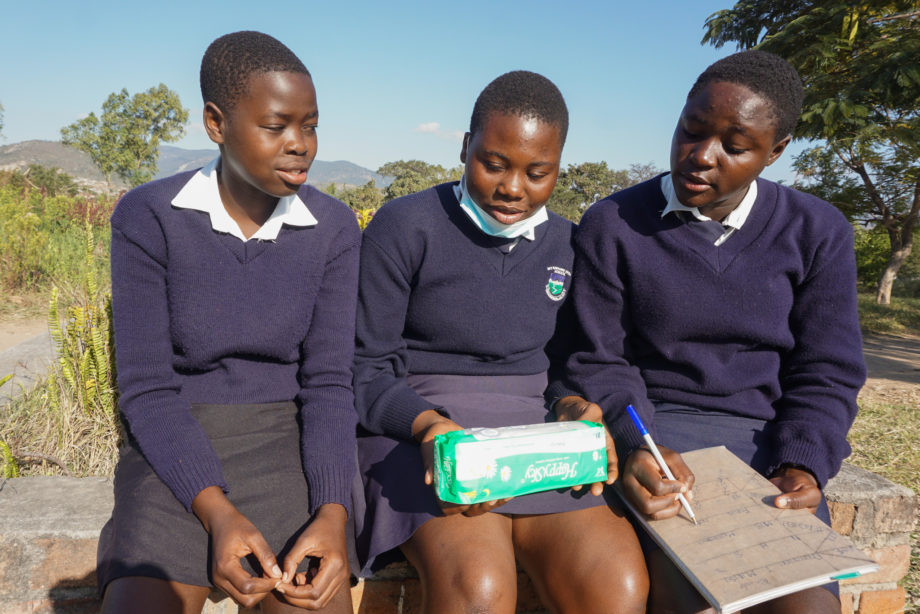 Jennifer Mhlanga, deputy minister in the Ministry of Women Affairs, Community, Small and Medium Enterprises Development, says she appreciates that the national government has made fiscal provision for procurement and distribution of pads to schools throughout the country.

“It means there is recognition that the menstrual hygiene issue is a problem and needs tackling at highest level,” she says. “We are aware of the challenges bedeviling women and the girl child during menstruation, which include inability to access pads, use of unconventional methods, as well as unaffordability of sanitary wear and other menstrual necessities.”

Providing kits to schoolgirls is a step in the right direction, she says, but lasting solutions require setting up factories across the country to produce reusable pads at greater quantities and affordability. “The more we roll that out, the more accessible it will be to our communities,” she says.

“I cannot risk another mishap, so I would rather stay at home until after my periods."Chiedza, 16-year-old Mutasa resident

Jackie Gurajena, the community liaison officer at Jafuta Foundation, which makes reusable pads accessible to local women, says she is aware of the government program that distributes menstrual products in schools. She hasn’t noticed the needs decreasing. Her organization, a nonprofit based in Victoria Falls that works with rural communities, is among those that have been filling in the gap by providing materials and training girls to make their own pads.

“I am aware of the government program, but I do not know which schools are being targeted because most of the girls we have in our project say they have not heard about the program,” she says.

Ruvimbo Muleya, a 14-year-old high school student in rural Hwange West, says she began menstruating when she was in seventh grade and has stopped going to school when she has her period.

“When I did not have sanitary pads, I used to tear my old clothes and use them,” she says. “However, they were not good enough as they did not absorb much, so I would stain myself often.”

Thanks to the reusable pad from Jafuta Foundation’s Girls Dignity project, she attends classes confidently. Even if the government provides her school with pads later this year, as her teachers anticipate, she says she plans to stay with what she has learned works for her needs. 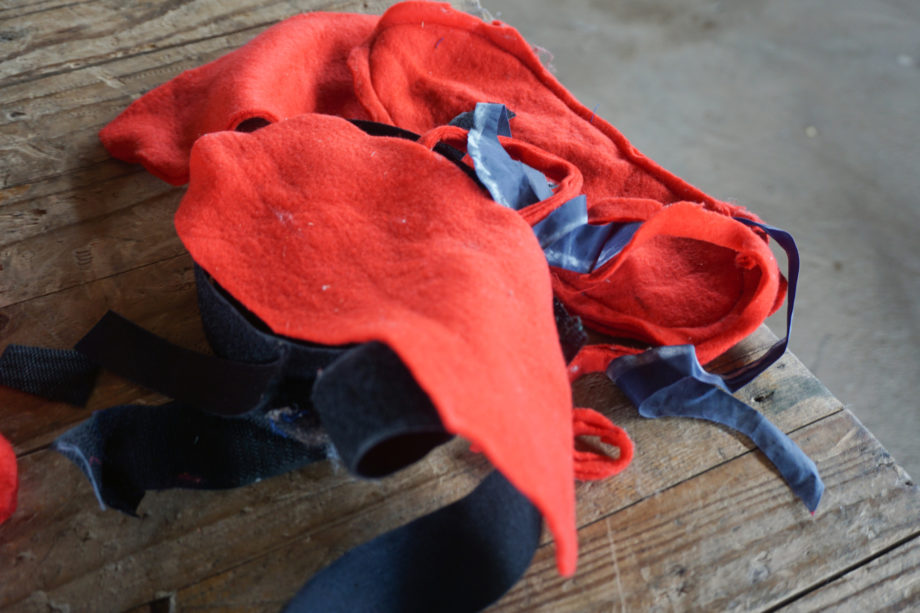 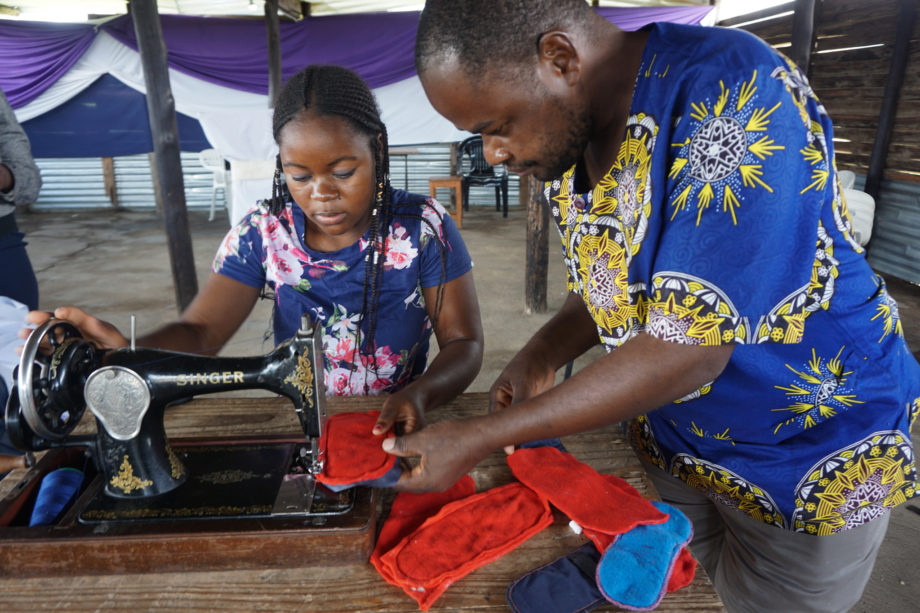 Moses Semwayo, right, teaches Brenda Machite and other students in his Mutare sewing class how to make reusable menstrual pads with scraps of soft, absorbent fabric.

Moses Semwayo, a Mutare tailor who has seen rural girls miss school and be pushed into early marriages after reaching menstruation age, decided to put his sewing skills to use by making and teaching others to make reusable pads.

“Being a father to girls only, I saw it as my duty to ensure that my girls can have safe, affordable sanitary wear when the time came,” Semwayo says. “A guy with money would just come and offer to buy sanitary wear for a girl whose family cannot provide, and, in the end, he asks for sexual favors. I do not want that for my girls.”

After taking a training course in 2019, he began teaching others at his sewing school, housed inside a wooden church building, to shape pads out of soft, absorbent fabrics. With the right materials, instruction and a sewing machine, the pads take less than 10 minutes to make, he says. He sells them at $1 a pad, and they last 18 months to five years, depending on how heavily they are used and if they are cared for properly.

While making the donations, Semwayo discovered some girls don’t have the undergarments to hold the pad. “At one point we had to give a girl the pant we were using for demonstration as she said she did not have any,” he says.

Menstrual health kits, especially reusable pads, have been a huge relief for Chartley and her friends at Nyamauru High School. The packages, distributed to each student and with a few extras left in the school office for unexpected emergencies, consist of six reusable pads, soap, a pack of 10 disposable pads for emergencies and underwear.

“Menstruation,” she says, “is no longer a nightmare for me.” 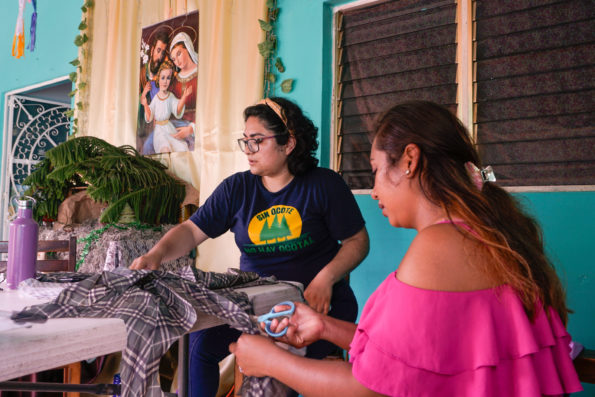 A Homemade Remedy for Menstruation Stigma 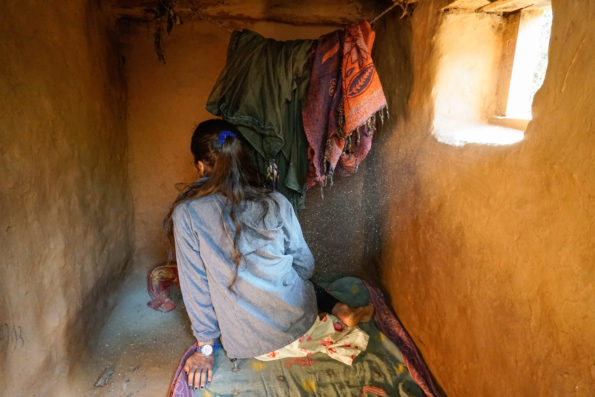 Banished: Menstrual Huts Are Illegal but Persist in Western Nepal