LUSAKA, ZAMBIA — A gray haze hovers above the garbage dump, a stain on an otherwise blue sky. Known as Marabo, the site unfurls across almost an acre of dirt, with mounds of plastic bags and cracked bottles baking under the midmorning sun. On the north end, dark green-and-black mud cakes the rubbish, emitting a sewer-like stench. The smell clings to the body long after one leaves.

In the distance, dozens of blurry figures. Women and children, scavenging to survive in a gutted economy. Day after day, they crunch across debris, some in rubber gumboots, others with their feet wrapped in plastic like sandwiches to shield them from the muck. Hands bare, faces unmasked, they rummage through the trash pile for whatever seems valuable, such as plastic bottles and metal bars that recycling companies in Lusaka, the capital, will buy. If they find baked beans or smoked sausages, it’s a welcome snack.

Luke is 13, a slender boy with an infectious smile. For months, he and his brothers — Thomas, 15, and Oswald, 17 — have joined their mother at the dump. (They asked that only their first names be used to avoid stigma.) The boys wear T-shirts, shorts, flip-flops — in days past, their play clothes — and, in the way children do, turn scavenging into a sort of treasure hunt.

A truck rumbles through the dreck. The brothers sprint to offload expired food and paper boxes, giggling and smiling as they fill the cloth sacks they carry on their backs. “I really want to go to school, but this job of scavenging is very tiring,” Luke says. Sweat dapples his face. He waves off buzzing flies. Before the pandemic, before the dump, he dreamed of becoming a soldier. “Even when I go to school, I don’t concentrate. I have stopped thinking of my future career for now.”

Like many African countries, Zambia has long struggled with child labor, or work that can potentially harm children’s health or limit their education. Most child workers are unpaid agricultural help, fertilizing cotton fields, harvesting tobacco, smoking fish and singeing wood to make charcoal, often alongside family, according to a report by the United States Bureau of International Labor Affairs. Other children mine amethysts and emeralds, crush stones at quarries, and tidy homes. These are jobs of desperation. Their families may live on a financial precipice; the HIV epidemic may have killed their parents and left them with no other means of survival. By forgoing their education, they are more easily trapped in a generational cycle of poverty. 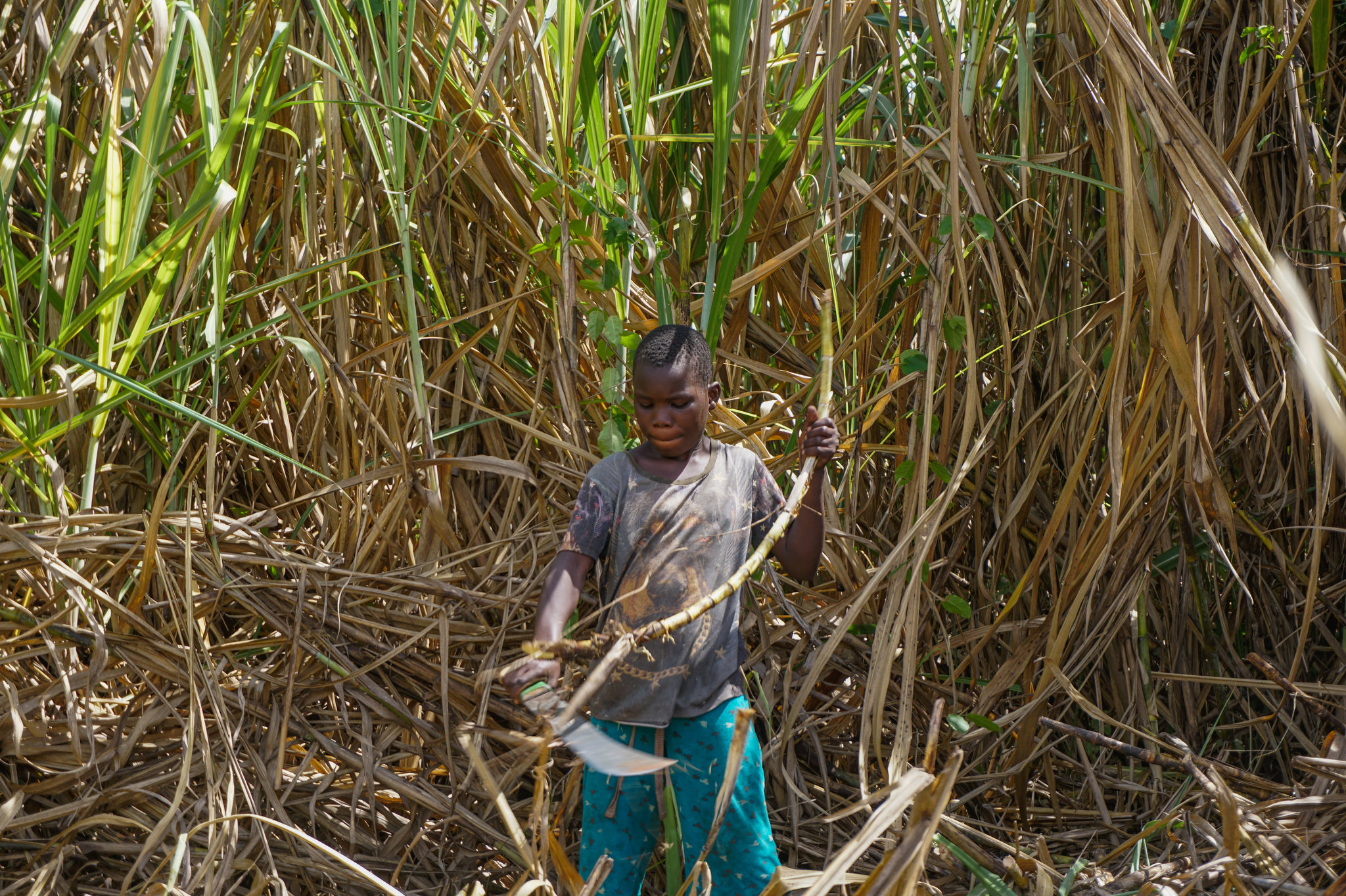 In 2005, nearly half of Zambians ages 7 to 14 were child laborers, according to a report by the Understanding Children’s Work program, which is affiliated with several United Nations agencies. A national effort to combat the problem, mainly by emphasizing access to education, eventually whittled that number to about 10% of children, a government report says. But as with so many social gains, the coronavirus scuttled that progress. Zambia’s economy was already teetering before the pandemic, in part because the price of copper, a major export, had tumbled; virus restrictions kneecapped nearly every other industry and sent inflation soaring. Meanwhile, schools shuttered, then reopened, with many adopting schedules intended to decongest classrooms. Students often attended class only two to three days; the rest of the week, many worked.

A few months into the pandemic, students in three grades — roughly ages 13, 15 and 18 — returned to school to prepare for exams. The Zambia National Education Coalition, a collection of civil society groups, found that nearly 1 in 10 boys didn’t come back. Many were working to help their families, says executive director George Hamusunga. (A smaller percentage of girls failed to return, largely because they’d gotten pregnant or married.) Much of the world has grappled with similar issues; the U.N. Children’s Fund, or UNICEF, recently reported the first uptick in child labor in two decades. 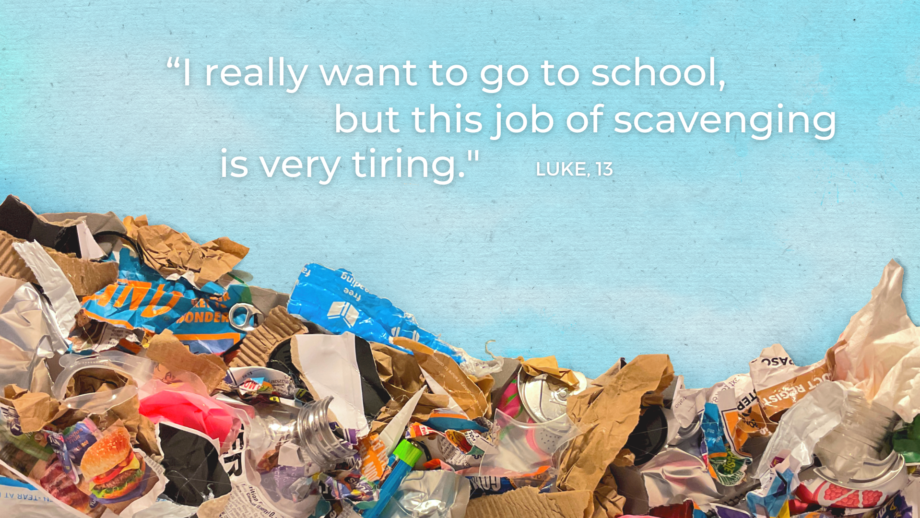 At the dump, Luke’s mother, Theresa Mumba, bends over and thumbs through the refuse. A quiet, focused woman, she wears a head wrap and a colorful African print dress. Mumba lost her job as a domestic worker early in the pandemic. She had no husband to rely on. Little formal education. No money to start a business. Three growing boys to feed. “One of my friends told me about the scavenging business, and I see that she is doing well,” Mumba says. “It is one business that does not require monetary capital, so I just had to go for it.”

With schools closed, her sons joined her. “My greatest fear was my children getting sick, but my friend encouraged me,” Mumba says. “She told me no one gets sick at the dumpsite and, true, no one got sick.” The boys took to scavenging like a new subject at school, learning, for instance, which locations to avoid because they’re spiked with broken glass. (Mumba bought them boots, but they were stolen — twice.) At day’s end, the family usually hauls their wares to an aggregator, a middleman who sells them to recycling companies. The aggregator pays 1.50 Zambian kwacha (9 cents) per kilogram for plastics and 4 kwacha (23 cents) for metal bars.

Three months in, Luke cut his foot on a broken bottle. “We had to take him to the clinic,” Mumba says. “The wound was so deep, it took over a month to heal.” For a time, Mumba forbade the boys from accompanying her, but scavenging is a numbers game. Without the extra hands, her monthly income dwindled from 1,200 kwacha ($70) — enough to squeak by — to 500 kwacha ($29). “Even when I stopped them from following me at the dumpsite, they secretly followed me to scavenge their own stuff,” she says. “So I just allowed them to join me.” 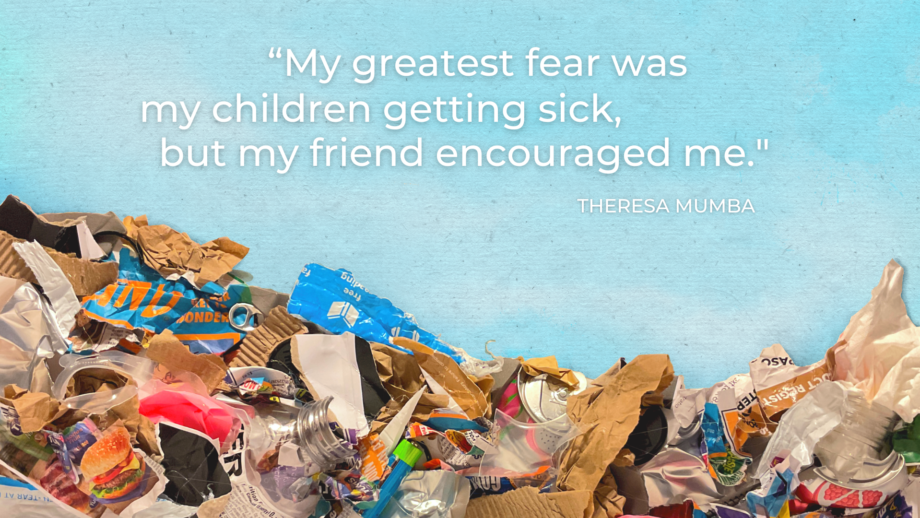 In Zambia, it’s illegal to employ children younger than 14 for “industrial undertakings,” such as mining or construction. But the law doesn’t apply to the largest employers of children: agricultural and family businesses. Doreen Mwamba, minister of Community Development and Social Services, says the government plans to amend the law. “Work is work, whether in a family setup or not, especially when the environment is hazardous. We need to protect our children,” says Cosmas Mukuka, secretary general for the Zambia Congress of Trade Unions, which represents worker interests. Even so, any changes will require legislative action. Advocates also acknowledge that tweaking rules won’t tackle the main driver of child labor: poverty.

When schools reopened in 2020, Mumba’s two older boys didn’t go back — she could no longer afford their tuition. This January, the Zambian government made secondary school free, but Oswald and Thomas remained at the dump. Luke, too. “These children need to eat, and the workload is too much for me,” their mother says. “We need to sell as much as we can to survive.”

The sun climbs the sky over Marabo; the boys lug their bulging sacks to a rusted wheelbarrow. Then, a break. Perched on stones at the edge of the dump, they use boxes to kindle a small fire, then cook and gulp down their lunch of maize porridge, unbothered by the flies or stench. Afterward, they turn their attention to some toy cars and dollies they collected — not to play with, but to fix. They sell them in their neighborhood for a couple of kwacha each.