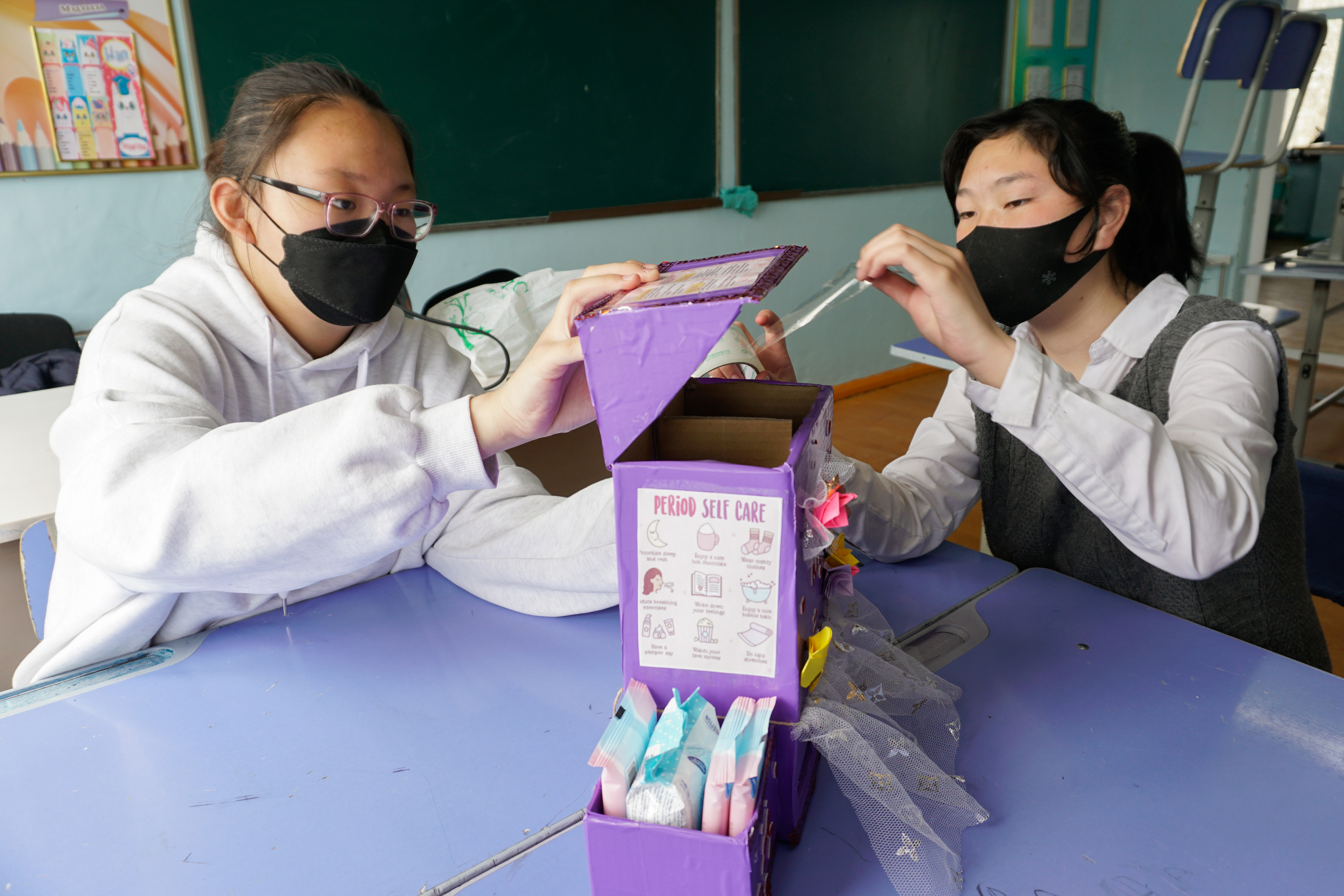 ERDENET, ORKHON PROVINCE, MONGOLIA — At the largest secondary school in Orkhon province, the busy halls go quiet on weekends. But in Classroom 9B, four teenagers fill the silence with cheerful chatter one Saturday as they decorate a purple cardboard box labeled “Girls’ Kit.”

As they fill the box with disposable sanitary pads and wipes, they marvel at how this simple, low-tech solution makes a huge difference for themselves and their classmates — who avoid carrying or asking for pads, due to the cost and the embarrassment they associate with their monthly periods.

“When I ask my girl classmates for a menstrual pad, they say they don’t have one, and it’s embarrassing to ask my teacher,” says B. Emujin, a 16-year-old who recalls panicking two years ago when she unexpectedly got her period in class and the blood soaked through her pants.

“I immediately wiped the chair for fear of being ridiculed and insulted if the children in the class found out about it,” says Emujin, who asked not to use her full name due to the stigma over this issue.

After nearly a decade of domestic and international assessments confirming these challenges but failing to implement solutions, Emujin and her peers across the country are taking matters into their own hands: building and installing what they call “emergency kits for girls” in their school bathrooms. 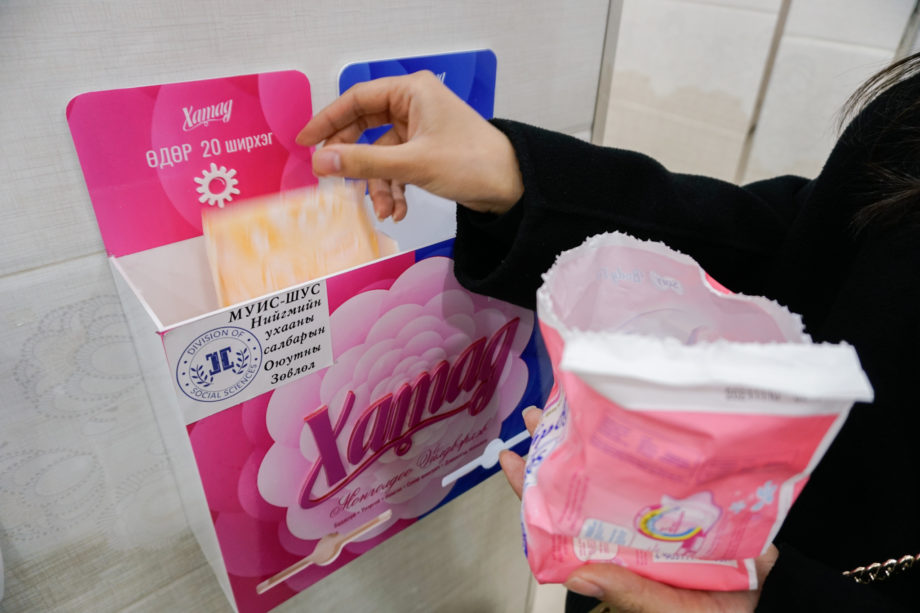 B. Emujin, 16, brings in sanitary pads to help stock the new “emergency kit for girls” at her school in Orkhon province.

The Mongolian government, civil society organizations and the private sector need to work together on water, sanitation and hygiene issues, especially in rural areas, says Evariste Kouassi-Komlan, a United Nations Children’s Fund representative in Mongolia. For children of herders and others from those communities, who predominantly live in dormitories during the academic year, the absence of parental support can make managing menstruation even more difficult, according to a 2016 UNICEF report.

“Being able to maintain menstrual hygiene is a fundamental human right. Girls should not be insulted because of menstruation,” he says. “UNICEF is working with the government to ensure that school water and sanitation facilities are safe, hygienic and accessible to support girls’ menstrual hygiene.”

According to the National Statistics Office, more than 355,000 girls study in Mongolia’s 848 secondary schools. At current market prices, it could require 2 billion Mongolian togrog ($636,000) per month to supply them all with pads. 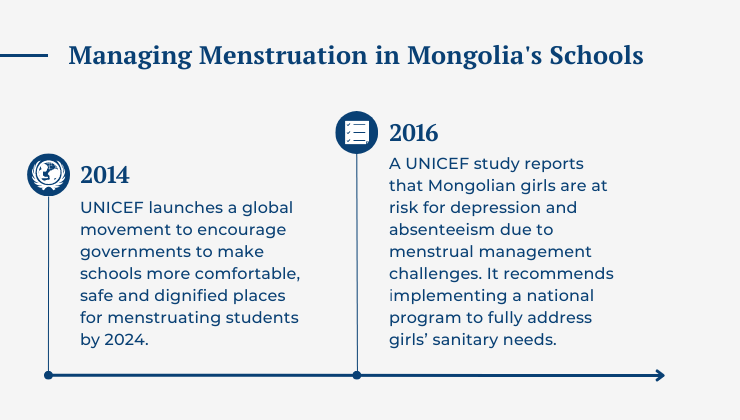 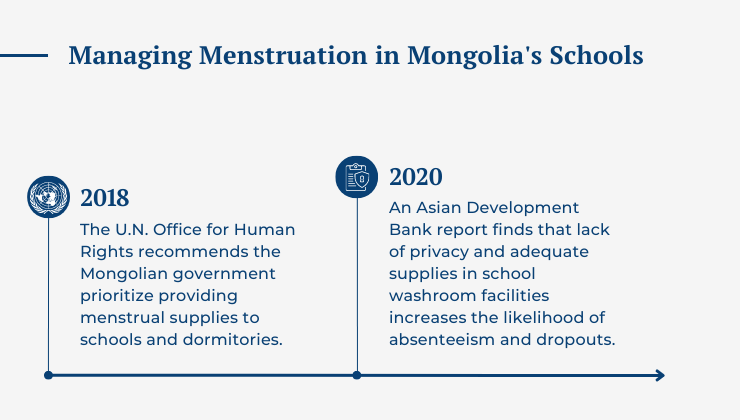 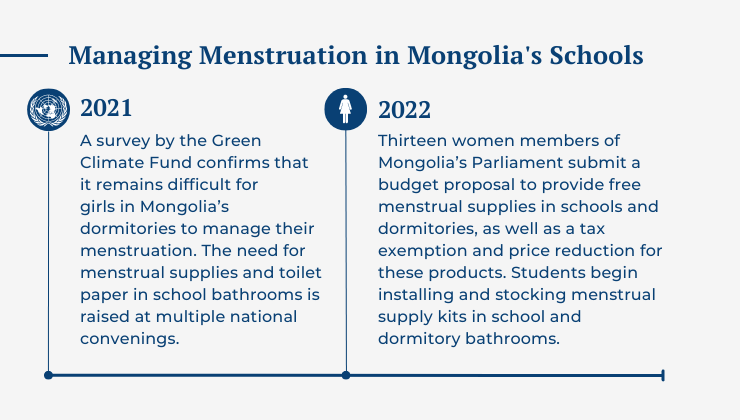 Munkhtsetseg Tserenjamts, a Parliament member representing the Sukhbaatar district in Ulaanbaatar, the capital, says the government should invest in girls’ sanitary needs, at least in the country’s 562 rural schools, where students commonly live in dormitories and have less access to pads. If there isn’t room in the current budget, this initiative could seek funding from nongovernmental organizations, she says.

“Menstruation does not need to be a stigma,” she says. “It is unacceptable to be embarrassed and miss classes because of menstruation. Therefore, it is time for us to address this issue.”

In February, she and the 12 other women members of the 76-member State Great Hural, the Mongolian Parliament, submitted a budget proposal to provide free menstrual supplies in schools and dormitories, along with a tax exemption and price reduction for these types of products. A working group is now conducting a feasibility study, which will inform a draft law that Munkhtsetseg hopes to present to the government by 2024.

Some Mongolians oppose the idea of providing free period products to girls in schools, however, citing the cost.

“It is wrong to teach children to expect free care from an early age. Parents are responsible for meeting these needs,” says Ganbold Baldandorj, a self-employed resident of Orkhon province who says he would object to a tax increase to fund this project.

But Munkhtsetseg says that girls should not be discriminated against because of their natural needs, and that Mongolia’s schoolgirls are an important investment for the country’s future.

“This is a way to protect the rights of girls,” she says. 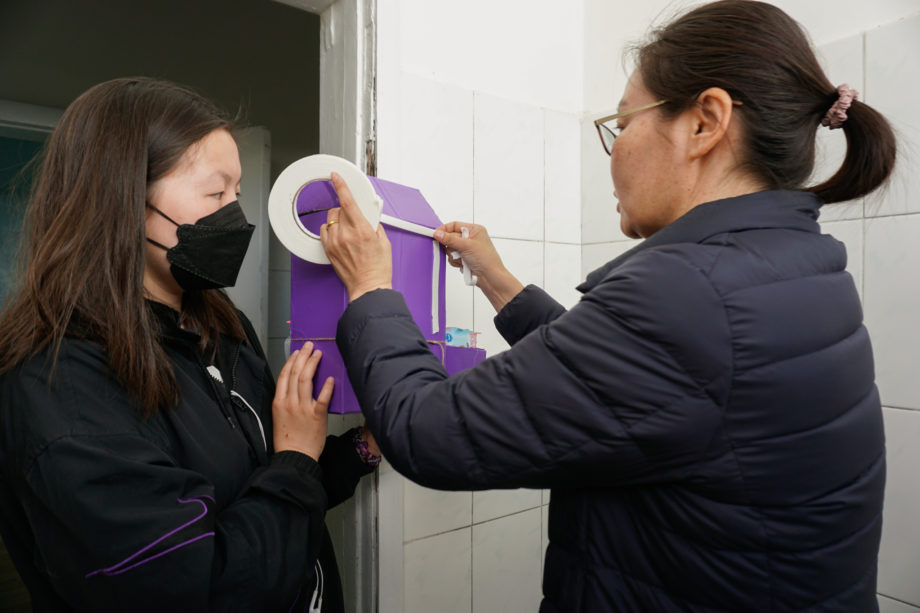 Anujin Gantulga, left, 16, and her teacher, Lkhagvajargal Bayarsaikhan, install an “emergency kit for girls” in the bathroom of the 8th Comprehensive School in Orkhon province.

In the absence of a national-level solution, the grassroots “emergency kit for girls” project has quickly spread throughout the country.

“Adults do not understand this problem very well, so we girls have dared to do it ourselves,” says Narangoo Ganhuyag, an 18-year-old who is in her final year at Ulaanbaatar’s 17th General Education School, among the earliest adopters of the kit campaign.

The Princess Center for the Protection of Girls’ and Women’s Rights, a nongovernmental organization, has helped popularize the efforts through social media posts since February. After seeing the idea shared on the center’s Facebook page, Anujin Gantulga, a 16-year-old in Orkhon province, says her classmates and teacher got excited about making one for their own school — where she says it’s common for boys to tease girls if they are discovered carrying sanitary pads in their bags.

“Since the day the box was installed, thank-you messages from many known and unknown girls have come. It worked out better than we ever imagined,” Anujin says. 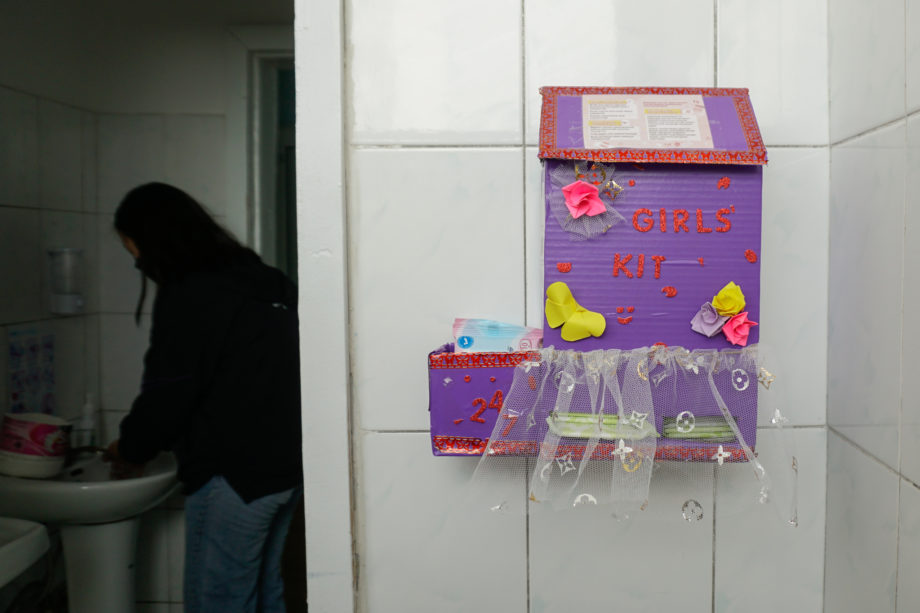 The new “Girls’ Kit” in the bathroom of Orkhon province’s 8th Comprehensive School in Mongolia contains a supply of donated sanitary pads and wipes for use as needed.

As they see girls installing the boxes and dipping into their lunch money to keep them supplied, teachers and other adult volunteers have begun joining the effort.

“It’s really great that the girls took up this issue and solved it without questioning anyone,” says Lkhagvajargal Bayarsaikhan, a high school teacher at the 8th Comprehensive School in Orkhon province. “We, teachers and staff, have to support this.”