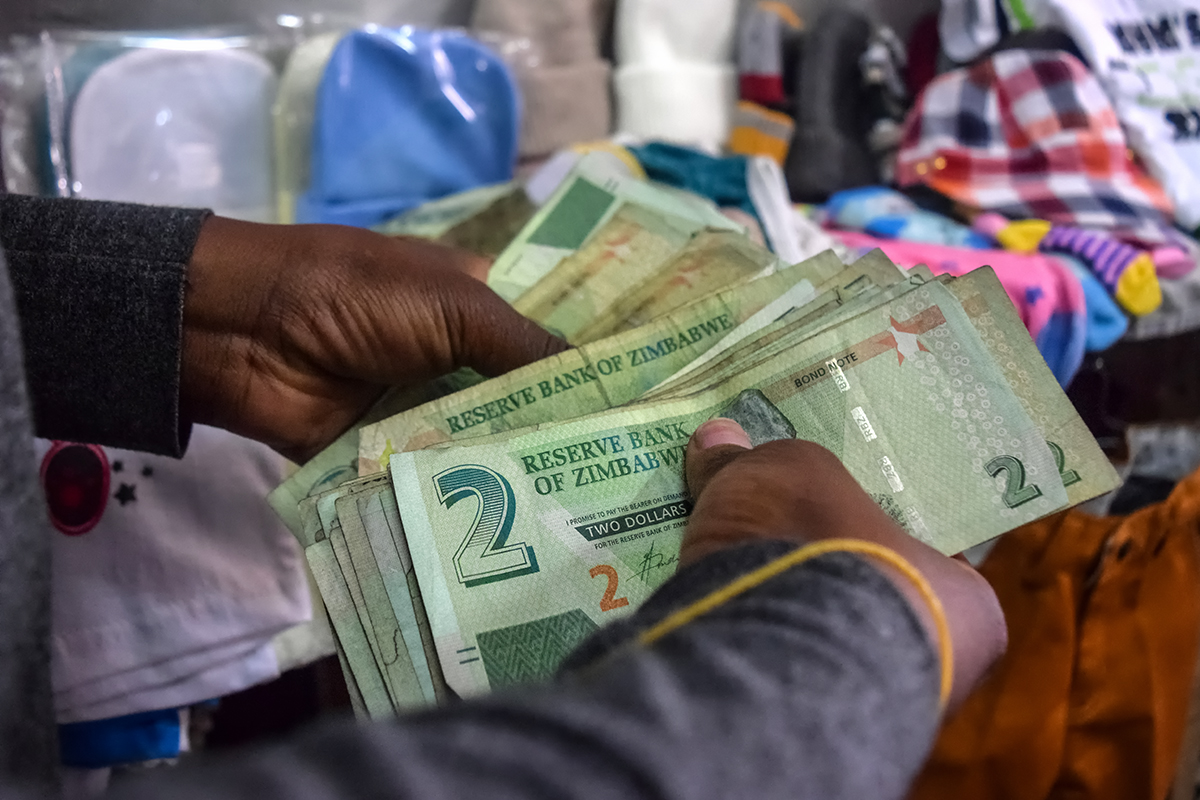 HARARE, ZIMBABWE — People across this country lost potentially huge amounts of money early this month when the government directed banks to, without notice, eliminate U.S. dollars from bank accounts and replaced them with a new local monetary unit worth much less.

As recently as three weeks ago, Zimbabweans primarily used U.S. dollars in all their transactions. Many Zimbabweans believed banks to be relatively safe places for holding U.S. dollars, even though a serious cash shortage has kept citizens from withdrawing any more than small amounts of cash from their accounts at any time.

But since Oct. 1, when the Zimbabwean government announced this change, bank clerks have told account holders that the money is now considered RTGS – a monetary unit that is not tied to a specific currency. An account holder who attempts to make a cash withdrawal from a bank account will instead receive bond notes, which fluctuate wildly in value.

Under normal circumstances, RTGS, a globally-used term which stands for real-time gross settlement, refers to an electronic payment system that occurs between banks.

To make matters more confusing, Clive Mphambela, an advocacy executive at the Bankers Association of Zimbabwe, told Global Press Journal that the money in bank accounts in Zimbabwe should be considered a “local dollar,” not a U.S. dollar.

Zimbabwe hasn’t had its own currency since 2009, when the Zimbabwean dollar collapsed.

Talk of a new local currency that replaces U.S. dollars in private bank accounts is alarming for Zimbabweans, many of whom are no longer sure how much money they have.

“We’re now panicking, because our money has been reduced to nothing,” says Clifford Hlatshwayo, 33, who says his salary for his job in the advocacy sector was paid in U.S. dollars via bank transfer.

The change had immediate and serious consequences. Across Zimbabwe, shopkeepers refuse to accept bond notes as payment, but bond notes are the only monetary unit that ordinary Zimbabweans can now withdraw from banks. Instead, shopkeepers still demand U.S. dollars, to which most people no longer have easy access unless they use bond notes to buy those dollars on the black market.

Shops have closed. Prices on basic goods have skyrocketed. Global Press Journal reporters found that a bottle of children’s medicine that cost $5 in September now goes for $50.

Caroline Mahohoma, an accountant, says her life was upended when she realized that her money was losing value every day.

“I just ended up buying stuff that I didn’t need as a mechanism of managing losses,” she says. “Waiting any further meant that the money would eventually be worthless.”

We’re now panicking, because our money has been reduced to nothing.Clifford Hlatshwayo, 33, who says his salary for his job in the advocacy sector was paid in U.S. dollars

This crisis began on Oct. 1, when the Zimbabwean government announced a slew of new policies that, according to an official statement released by the Reserve Bank of Zimbabwe, are intended to repair the economy after years of crippling inflation. The policies include requirements that capital gains taxes be paid in foreign currency and that foreign truck drivers who buy fuel in Zimbabwe do so in foreign currency, along with many other measures.

But instead of giving account holders a chance to create foreign currency accounts and transfer their U.S. dollars into them, existing accounts were re-labeled as RTGS accounts. Global Press Journal reporters found this to be true at their own banks, and local people they interviewed all said the same had happened at their banks, too.

The money in those accounts, once U.S. dollars, is now described by bank clerks and the Reserve Bank of Zimbabwe as “local” currency or “local dollars.” When withdrawn, that money, which will be disbursed in bond notes, won’t carry the same value as the U.S. dollars that were originally deposited.

The banking sector’s total deposits amounted to about $9.5 billion as of June, says John Mangudya, the governor of the Reserve Bank of Zimbabwe, but he cautioned against thinking of all of that money as “real” U.S. dollars.

Basically, Mangudya’s explanation describes a scenario in which a collection of currencies – U.S. dollars, RTGS units and bond notes – are all on paper called U.S. dollars, even though they each carry a different value.

Brains Muchemwa, a Zimbabwean economist, says the government’s policy is inconsistent when it comes to whether the RTGS balances are fully convertible. The government’s confusing explanations have led exchange rates to skyrocket, he says.

According to the Reserve Bank of Zimbabwe, banks held $9.5 billion in deposits as of June 30, but it’s not clear how much of that money was actually held in U.S. dollars. Some or even much of it was likely in the form of bond notes or RTGS units – non-currencies that economist Steve H. Hanke calls “quasi-money.”

Hanke, a professor of applied economics at The Johns Hopkins University and a senior fellow and director of the Troubled Currencies Project at the Cato Institute in Washington, DC, is an expert at tracking inflation.

The Zimbabwean government has since late 2016 limited how much cash a person can withdraw from a bank on any given day – a situation that pushed many Zimbabweans to avoid banks altogether. But for others, banks were the only conduit available to receive salaries and other payments, including those that were made in U.S. dollars.

No one knows for sure what has happened to the dollars that were in individual accounts, he says.

Richard Mawarire, an economist based in Harare, agrees that any person who had U.S. dollars in an ordinary bank account in Zimbabwe lost significant value on that money overnight. But even before Oct. 1, he says, people who wanted to move their U.S. dollars from Zimbabwean banks would have been forced to pay a significant premium. That’s been true since at least last year, when banks began to identify what Mawarire says are essentially three different currencies: bond notes, RTGS funds and U.S. dollars.

Since the Oct. 1 announcement, Mawarire says, the only proper U.S. dollar is the money kept in a nostro foreign currency bank account, even though the government says that money in the new RTGS accounts still represents U.S. dollars.

This current crisis feels to many Zimbabweans like a repeat of the economic trauma they experienced a decade ago, when hyperinflation reached 500 billion percent. Then, news reports noted that a loaf of bread cost 10 million Zimbabwean dollars.

Zimbabwe’s new policies are among the first major changes under President Emmerson Mnangagwa, who took control of the country after pushing out longtime President Robert Mugabe in November. Mnangagwa was elected president in July.