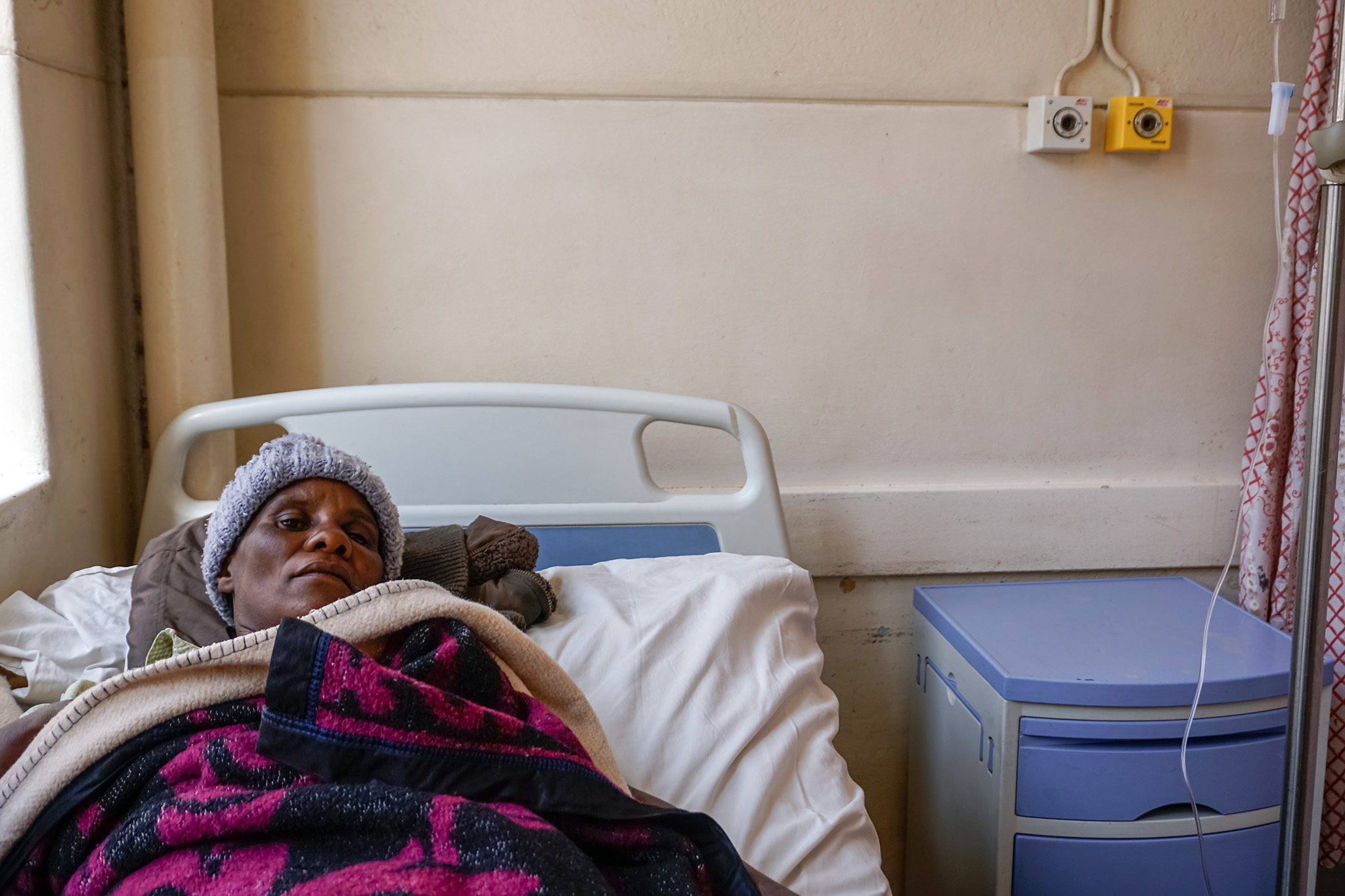 HARARE, ZIMBABWE — Shepherd Dishon huddles on the edge of a bench at Harare Central Hospital, coughing and clasping his chest. Three days after arriving, he’s still waiting for treatment.

He paid a consultation fee, but it didn’t help. “The doctors were not available to attend to me,” he says between coughs.

Dishon’s predicament, echoed in hospitals across Zimbabwe, highlights the sheer unpreparedness of the country’s health care system as the new coronavirus spreads around the world. Zimbabwe has reported eight cases as of March 28, including one death, according to the Johns Hopkins University & Medicine Coronavirus Resource Center. More than 170 countries and regions have confirmed infections, including nearby South Africa, Zambia and Democratic Republic of Congo.

If the virus spreads through the country, the consequences could prove disastrous. Zimbabwe faces a unique set of challenges: haphazard monitoring of people traveling from high-risk areas like China, an economic crisis, and a crippled health care system that has seen qualified doctors flee and high fees for care. These issues make Zimbabwe among the world’s more vulnerable countries as the global pandemic surges across continents.

“With our collapsed health care system I am so afraid should we have the disease in Zimbabwe,” says Lloyd Kuveya, hunkered in his office at a local non-governmental organization in Harare, the capital. “The virus will spread like wildfire.”

Doctors last fall went on strike over deteriorating working conditions and continue to leave the country for better opportunities. Hospitals lack basic equipment such as ultrasound machines and ventilators, and decaying infrastructure means patients might not have a place to go — if officials can even diagnose them. Some doctors are refusing to go to work until they receive suitable protective gear to combat the coronavirus.

“More needs to be done,” says Dr. Fortune Nyamande, chairperson of the Zimbabwe Association of Doctors for Human Rights. “We need to look at the isolation facilities we have in Zimbabwe. We need well-equipped and high-level infection control facilities.” 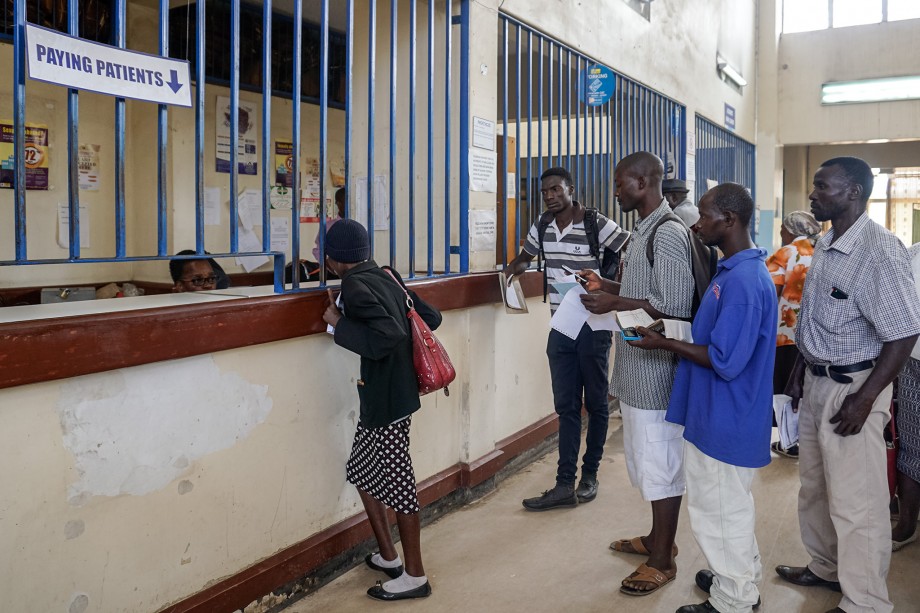 Joyce Tamirepi pays her hospital consultation fee to Mary Chipendo, a clerk at Harare Central Hospital. The government has raised hospital user fees by more than 600% amid a shortage of drugs and equipment.

Harare has two infectious disease hospitals. One of these, Wilkins Hospital, can accommodate 35 beds per ward. If they became full, officials would set up tents in the yard outside to attend to the overflow, says Dr. Prosper Chonzi, the director of health services for Harare.

Other health care facilities are no better. Hospitals should have at least 100 beds in their intensive care units to meet international standards, says Dr. Christopher Pasi, the clinical director of Harare Central Hospital. “Sadly, at the moment, we have one.”

The Global Fund to Fight AIDS, Tuberculosis and Malaria, a Geneva-based financing and partnership organization, and other donors are providing $25 million to assist with coronavirus-fighting efforts, says Agnes Mahomva, permanent secretary in the Ministry of Health and Child Care. The government, she says, is making every effort to ensure adequate preparations for COVID-19, the disease caused by the new coronavirus.

But Zimbabwe already struggles with the most important phase in prevention efforts: stopping the virus from entering the country. Officials lack mechanisms to effectively monitor travelers, particularly those from countries with high numbers of infections, including China, where the virus first appeared. The East Asian nation and Zimbabwe share a close trade relationship.

“One of the main issues we have with following up on travelers is that they may have listed an address in, say, Borrowdale, for example, and they go and stay in Chitungwiza,” Chonzi says. “When we go to the address in question, we find them not there.”

Even if officials track down potential cases, the country has limited ability to test for the virus.

“Preparation for an epidemic of this kind is not simple,” says Rufaro Chivaura from Premier Services Medical Investment Group, a private company with branches nationwide. “We are looking into upgrading our biosafety levels.”

With our collapsed health care system I am so afraid should we have the disease in Zimbabwe. The virus will spread like wildfire.Lloyd Kuveya

Medical centers need a level 3 lab because it offers the best precautions to safely run tests on the virus, Chivaura says. Right now, the country has only level 1 and level 2 labs, which have less stringent safety requirements.

The investment group is trying to turn their laboratory into a level 3, which would include a containment area with double door entries, a sealable room for decontamination and isolated ventilation systems. But that takes time and money.

“We need to look at safety precautions from the first contact person, who is the receptionist at your local clinic, to the nurses and the doctors who take the samples,” Chivaura says. “At this point, we do not have that and it increases the chance of spreading the disease.”

Doctors and nurses started filtering out of Zimbabwe around 2000 when the economy collapsed and a once well-regarded health care system began to crumble. It has gotten worse. Hyperinflation and cash shortages in recent years have led to a dearth of drugs, equipment and other medical essentials. A 2018 study on Zimbabwe’s health care system, published by the health care journal Global Health Action, found that sub-par working conditions drove 20% of health professionals abroad every year.

Staff sometimes run out of painkillers and lack enough machines to check blood pressure, says Dr. Tawanda Zvakada, president of the Zimbabwe Hospital Doctors Association and an employee at Harare Central Hospital. The hospital has one ultrasound machine and an X-ray machine that only occasionally works.

Zimbabwean doctors went on strike in September 2019 to protest poor pay and dwindling resources. Hospitals, the majority of which are run by the government, handled only emergencies. 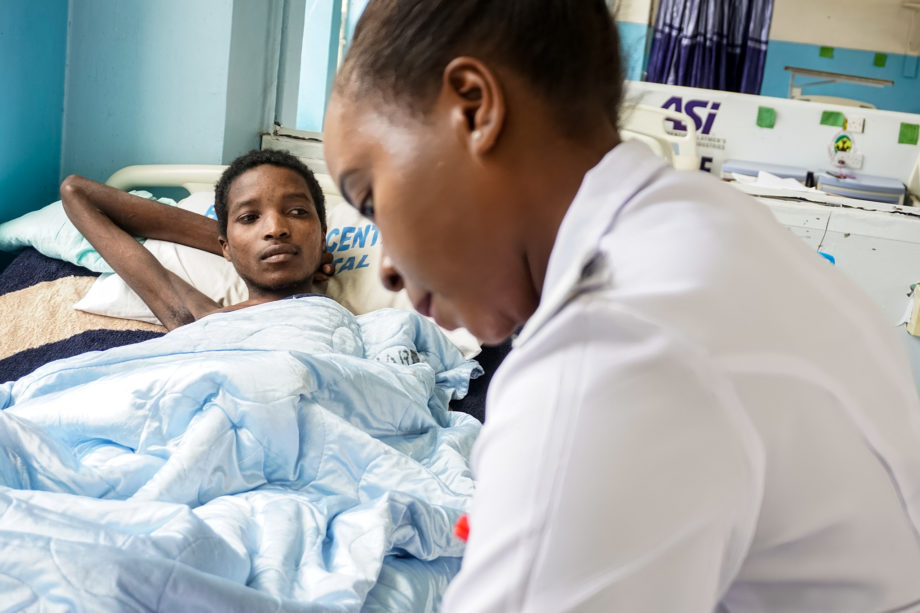 The strike ended in January, when a nonprofit offered to cover some funding. But morale remains low.

“We are coming to work two days in a week, but our hearts are no longer in this job,” said Nyasha, a nurse who works at a Harare hospital and asked only to be identified by her first name out of fear of retribution. “The salary is poor and the doctors are rarely at work. Some just come for a few hours and leave.”

Nurses earn between 1,500 Zimbabwean dollars (ZWL) ($81.44) and 2,000 ZWL ($108.58) a month, says Enock Dongo, president of the Zimbabwe Nurses Association. The hyperinflation makes it difficult to gauge average annual salaries, but monthly rent for a two-bedroom house generally costs around 1,200 ZWL ($65.15).

Many health care professionals head to Europe, Dongo says, while others are going to such African countries as Botswana, South Africa and Namibia in search of better pay and working conditions. This creates an experience vacuum. “We are left with junior nurses who still need mentoring,” he says. And what staff remain have minimal resources. “Sometimes, they do not have protective clothing when attending to patients.”

Administrators insist they are doing as much as possible.

“The issue of flexi-hours has done what it is supposed to do, which for us is to have continuity of nursing care at the hospital,” he says. “It’s not the best. We hope to move away from it.”

We are coming to work two days in a week, but our hearts are no longer in this job. The salary is poor and the doctors are rarely at work. Some just come for a few hours and leave.Nyasha, a nurse who works at a Harare hospital

But the situation has shown little improvement.

The lack of available resources continues to threaten care. “When we are in the situation that we are in — where there is only a single theater room left aside for emergencies — this means all emergencies from various disciplines are put in a queue,” says Dr. Augustine Mapfumo, an orthopedic surgeon at Harare Central Hospital.

One of the government’s solutions to the health care crisis has sparked new problems.

Officials hiked hospital user fees by more than 600% in January to pay for expenses. They told citizens it would ensure better services, which health organizations deny. Patients pay a consultation fee with no guarantee of seeing a doctor.

Mahomva, the health ministry permanent secretary, defends the government’s actions as reasonable and not all-encompassing. “We review prices of health services based on economy and inflation within the country,” she says. “But that does not mean we are changing our policies of providing free health care for pregnant women, under 5 [years-old] children and indigent people.”

Outpatient hallways, once flooded, are empty. A few people wait near a gated booth at Harare Central Hospital to pay their consultation fees or to see the doctor. Closer to the wards, the smell of disinfectant fills the hallway.

Many Zimbabweans, like Locadia Nyanzira, now avoid the country’s hospitals. Nyanzira, a mother of five who sells fuel on the black market, sat outside her home on a recent morning and bemoaned the user fees that make health care “out of reach for me and many other people who live here.”

She worries even more about what this means for the spread of the virus.

“Zimbabwe has people with the coronavirus, but the government just doesn’t want to admit this because of the poor health facilities,” she says. “I am really scared.”