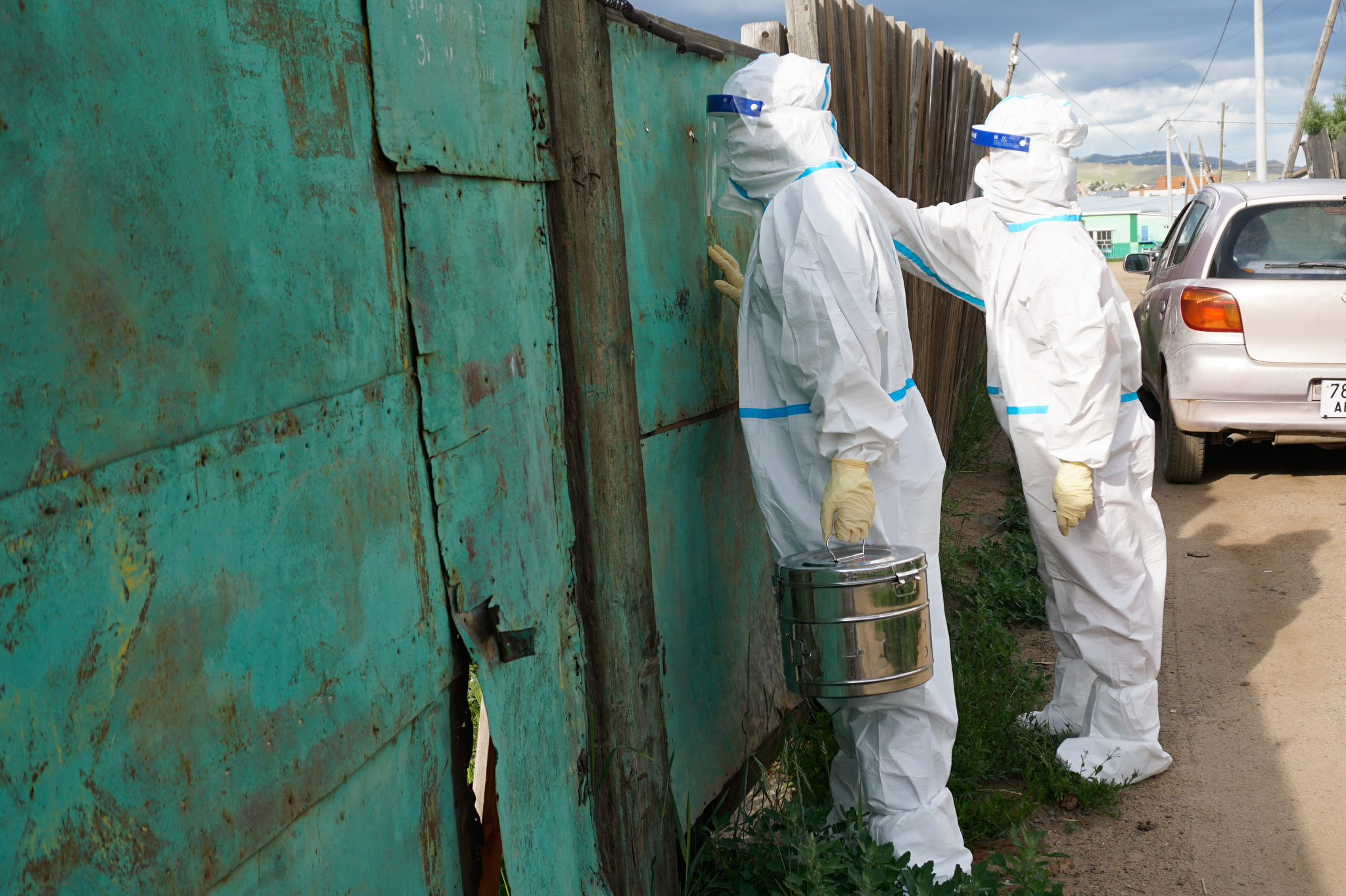 ERDENEBULGAN, ARKHANGAI PROVINCE, MONGOLIA — When the coronavirus pandemic first broke out in China, the Mongolian government was quick to respond.

It closed the country’s border with China on Feb. 1, 2020, shuttered schools, imposed national lockdowns, and issued clear guidance to the public to wear masks, wash their hands and practice social distancing. For nearly 10 months, the decisive actions prevented the spread of the coronavirus in Mongolia, earning the praise of the World Health Organization.

“Congratulations Mongolia on a successful response to #COVID19, with 0 deaths so far & no local transmission,” WHO director-general Tedros Adhanom Ghebreyesus posted on Twitter in early November. “Thank you to the people of Mongolia for acting in solidarity & showing us that by following proven public health advice we can stop this virus from spreading.”

Later that month, Mongolia recorded its first domestic coronavirus transmission. And since then, cases have skyrocketed, particularly this spring as the government lifted lockdown restrictions and encouraged people to gather together to participate in events related to the presidential election campaign, which began in May.

In March, the country was recording around 100 coronavirus cases per day. By June, the number of daily infections had spiked to more than 2,000.

Mongolia’s health sector has long suffered from underfunding, which has limited care in some parts of the country, particularly rural communities. Now, as a result of the rising number of coronavirus infections, the health sector is overwhelmed. Doctors and nurses say they’re exhausted, and hospitals and family health centers are grappling with shortages of medicine and equipment.

The decision to lift lockdown restrictions before most Mongolians were vaccinated was a major contributor to the disease’s spread, says Buyantogtokh Batsukh, head of the Medical Aid Policy Implementation Coordination Department at the Ministry of Health.

“Weakening the lockdown while not seeing the results of the vaccines became a major cause of increasing infections,” he says. 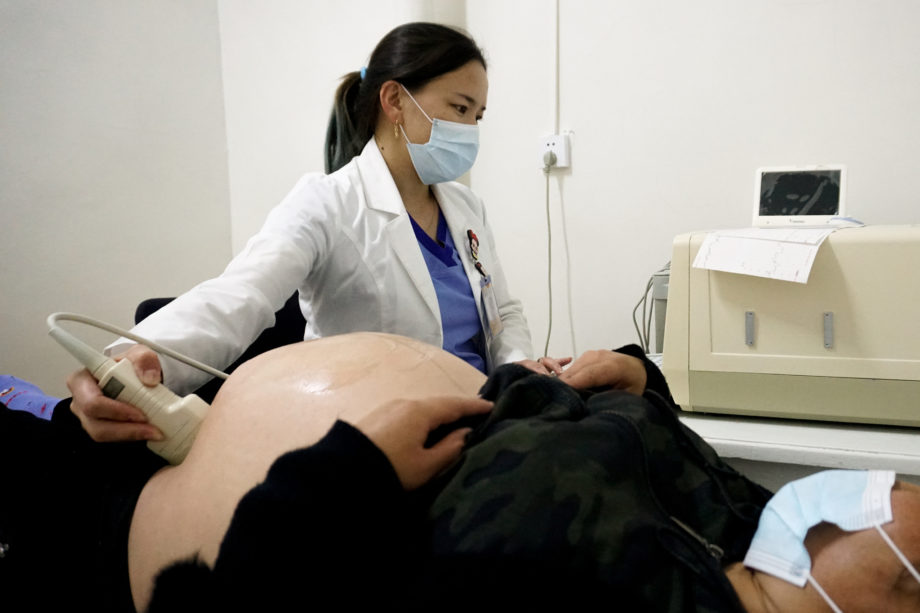 Dr. Ariunjargal Chimeddorj conducts an ultrasound examination of a patient.

For Mongolia’s doctors and nurses, the pandemic exacerbates an already challenging situation.

“It is common for us to disinfect disposable tools and reuse them,” Ariunjargal says.

The strain of treating coronavirus patients has only increased the burdens on the country’s medical personnel, she says. “Now those in the health sector are exhausted to the core.”

A key complaint of many health care workers is that, at a time when more and more is being asked of them, their salaries have not increased — and indeed, have remained below the average salary for public sector workers for the past two decades. The average monthly salary of health sector employees is 1.1 million Mongolian togrogs ($386), as of the first quarter of 2021, according to the National Statistics Office, compared to the average monthly wage of 1.3 million togrogs ($456) for public sector employees.

“Our workers, serving in these tough circumstances, cannot get paid a suitable amount for their labor,” says Narantuya Chagnaa, deputy head of the Medical Employees Trade Union Federation of Mongolia. 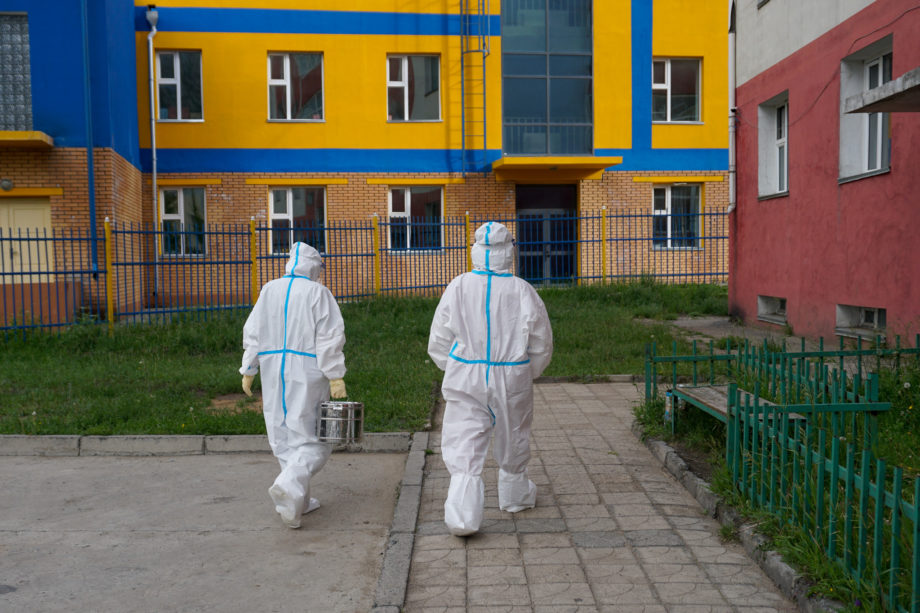 In response, the government resolved to provide one-time payments of 2 million togrogs ($700) for doctors and nurses serving in the highest-risk facilities on the front lines of the pandemic, and 1 million togrogs ($350) for other health care workers.

To address the burdens on public sector health care workers, the Ministry of Health has mobilized private hospitals to provide personnel and equipment to help fight the pandemic. The government also is working to fast-track the training period for resident physicians, and to increase recruitment of new doctors.

The government has increased the supply of equipment such as respirators and oxygen tanks in response to the pandemic, says Buyantogtokh, of the health ministry.

“Aid and services provided for the health sector of Mongolia are not in a significant shortage in one way or the other,” he says. 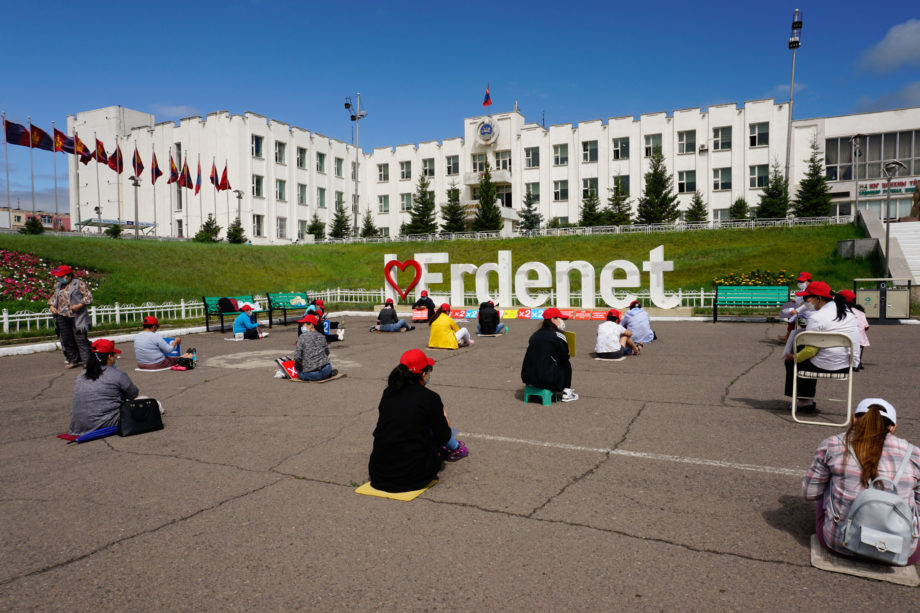 Doctors, nurses and other health care workers protest in front of the local Government Palace in Erdenet on July 8, demanding a salary increase.

Yet the dispute over salaries continues.

As tensions continue, the Ministry of Health and the Medical Employees Trade Union Federation have established a working group to study the issue and negotiate a salary increase.

“The Ministry of Health agrees on the need to increase salaries,” Buyantogtokh says, adding that discussions with doctors have been positive. But in order to raise salaries, the government might need to increase the cost of medical services and health insurance.

To Narantuya, the union leader, doubling health care worker salaries would itself be a concession. Even with that increase, the salaries for medical personnel would remain below international levels, she says.

“The industry understands,” she says, “that the country’s economic situation is difficult during the pandemic.”

Editor’s Note: Reporter Odonchimeg Batsukh is an epidemiologist in Arkhangai province. She hasn’t practiced medicine or contributed to the Medical Employees Trade Union Federation since April 2020.