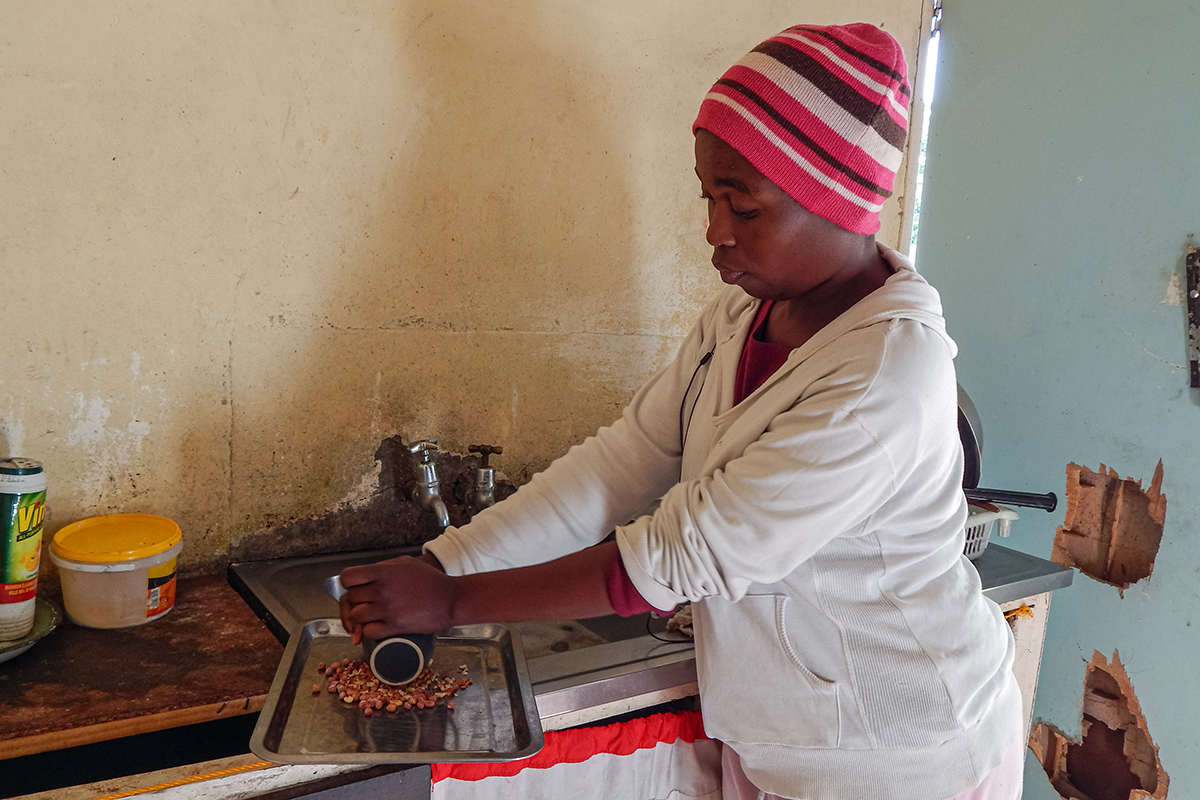 BULAWAYO, ZIMBABWE – For Zimbabweans, making ends meet is a heroic feat these days.

Prices are skyrocketing in local supermarkets, thanks to an unstable currency market. So now, some people are circumventing them entirely by making basic goods, like candles, dishwasher and peanut butter, in their homes and selling them for cheaper prices.

Nomathamsanqa Dlamini is one them. She makes peanut butter from her home in a suburb of Bulawayo, Zimbabwe’s second-largest city.

Dlamini buys the peanuts in rural areas to ensure the cost of her product remains low. She sells her peanut butter for 10 Zimbabwean dollars (ZWL) (97 cents), which is cheaper than in supermarkets where it sells for 15 ZWL ($1.46). The mother of two says she sells an average of five to eight bottles a week.

These home businesses are a lifeline for Zimbabweans struggling in a weak economy where jobs are scarce and the cost of living is rising by the day.

Since 2009, most people here have used U.S. dollars for daily transactions after the Zimbabwean dollar collapsed. But in October 2018, banks converted all money in customer accounts to RTGS, the electronic form of Zimbabwe’s bond notes, worth much less than the U.S. dollar. Many had their savings wiped out completely, and prices of basic goods, including fuel and food, rose.

Then on June 24, the government reintroduced the Zimbabwean dollar and banned trading in foreign currencies, a move many fear will make the crisis even worse.

The situation has forced company closures in major cities such as Bulawayo and the capital, Harare, leading to mass job losses. Unemployment rates now range wildly across the country, from 4% to more than 90%.

But what’s for sure is that more local people – about 60%, according to a 2018 International Monetary Fund study – are working in the informal economy.

The boom in homemade goods has been bolstered by a 2016 law that prohibited the import of certain items, including peanut butter and jams, to encourage residents to purchase locally.

“These homemade products offer residents a cheaper alternative,” says Felix Chari, a business analyst and lecturer in Economics at Zimbabwe’s Bindura University of Science Education. “However, they may eventually be affected by price increases in the raw materials they use, which may eventually force them to increase their prices or their businesses will be affected.”

Buhlebenkosi Mthethwa, who makes a pine gel for cleaning in her home, agrees. She says the unstable and skyrocketing price of raw materials is creating numerous challenges for her.

“I make pine gel, which sells well,” she says. “However, some of the raw materials are becoming expensive due to the harsh economy and ever-increasing prices.”

Others are finding different ways around the high costs.

Methembe Ndlovu, learned how to make syrups, soaps and detergents in 2017, and now sells five-liter bottles of flavored, concentrated syrups. Since the unstable cost of goods in Zimbabwe makes low-cost production a challenge, Ndlovu says she now she sources most of her raw materials from neighboring countries, including South Africa and Botswana.

“They sell quite fast,” says Ndlovu, who also trains other women how to make and sell the syrups.

Some residents say that they’re actually seeing a rise in profits thanks to greater demand, despite the high cost of goods. Home-based candle makers say that demand for their products increased after a rise in load shedding, which leaves residents without electricity for hours, or even days at a time.

Margaret Nkomo says she sees the entrepreneurial spirit of women as the key to the homemade goods movement.

“Many women have realized the importance of being independent, and these homemade products are doing well for most of them,” she says.

Nkomo has trained more than 1,200 women in Bulawayo in how to make soap and candles since January 2018.

Still, some people are hesitant to spend their scarce cash on homemade products because quality can be inconsistent.

“I am quite reluctant to purchase these goods,” says Samson Ngwenya, a veterinary officer who prefers local supermarkets, even though they are more expensive. “Once I later discover that it is not the quality that I want, where do I find the person I bought from? Most of these people are mobile.”