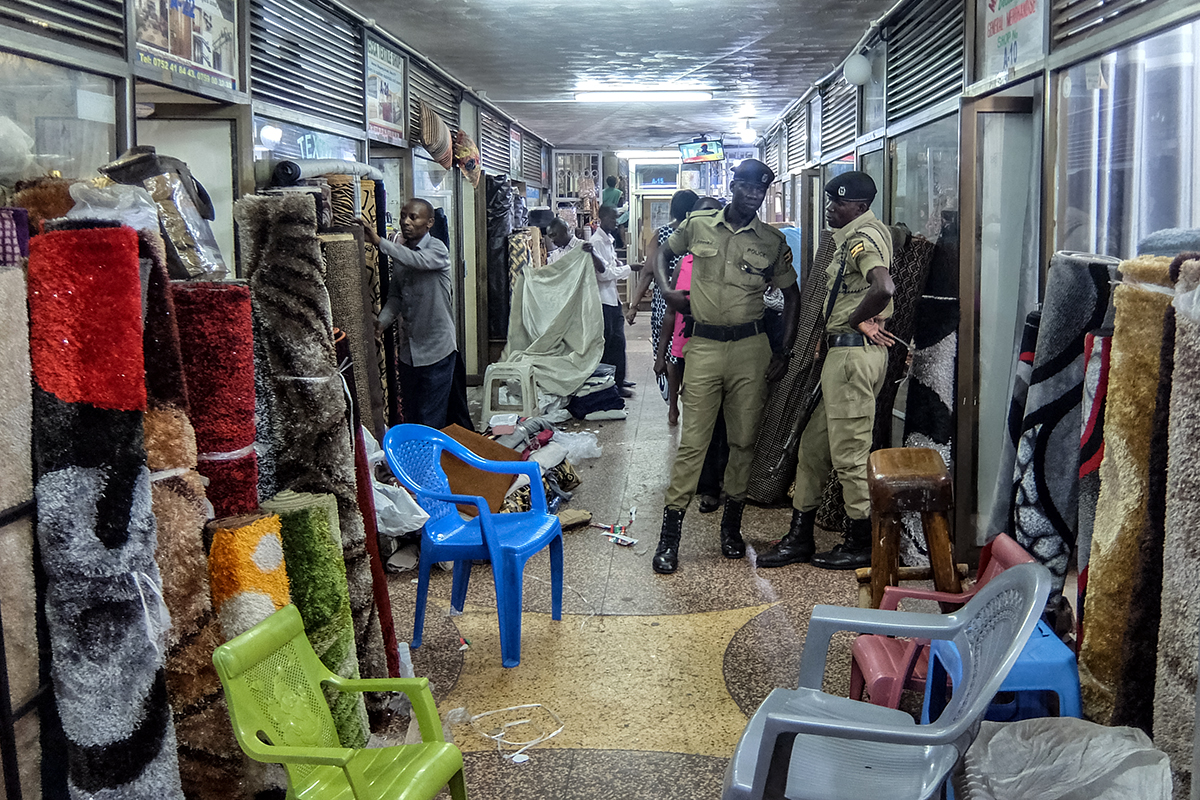 KAMPALA, UGANDA — The radio on Liiga Francis’s work table drones on relentlessly. It’s startlingly noisy, but he doesn’t turn it off or even reduce the volume. It’s a police radio, and Francis is office commander of the Nakasero Market Police Station, located in the center of the capital’s busy shopping district.

“This season, it is indispensable,” Francis says of the radio.

Petty crime tends to go up here around the holidays, when shoppers fill the streets. But, in recent years, police have taken extra steps to guard against petty crime. In 2017, the incidence of theft and other crimes of opportunity went down during the holiday season. (Read our story about that trend here.) Police say they’re continuing targeted efforts this year that are paying off by keeping people – and their valuables – safe. 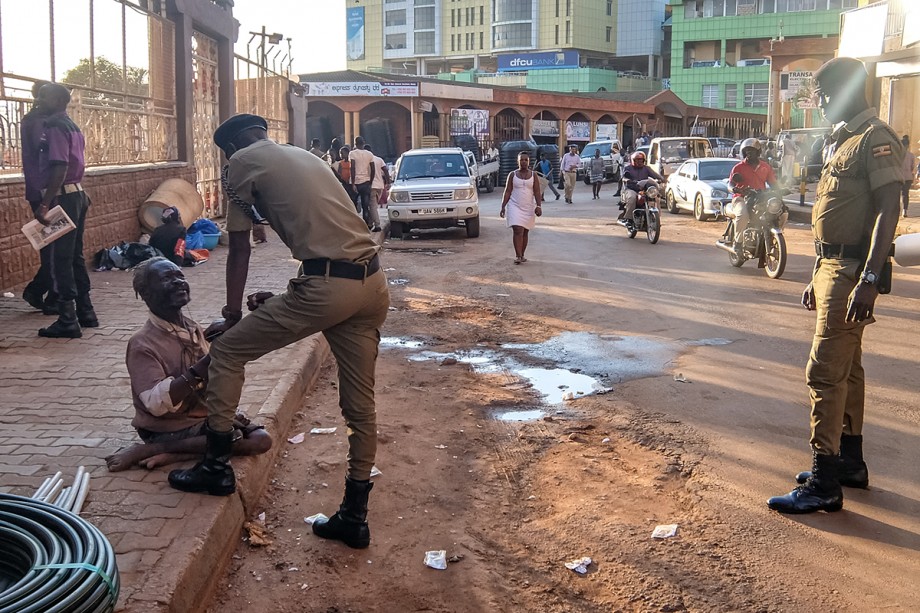 The man talking to the police officer repairs watches for a living, but to local police, he’s an informant. He has a “powerful security tool: his eye,” says Liiga Francis, officer commander of the Nakasero Market Police Station.

Closed-circuit TV cameras have been planted at busy intersections, so that police can catch any fishy behavior, says Luke Owoyesigyire, the police spokesperson for Kampala metropolitan area.

A partnership with Uganda’s army means that police and military officers form a group and move together throughout the city all day, keeping an eye out for crime.

“We visit areas which no one thinks we can go to,” says Peter Odomokai, a police officer. “The hidden alleys and corridors where we suspect wrong elements to hide is our target area.”

In addition, the police have deployed plainclothes officers, Francis says. 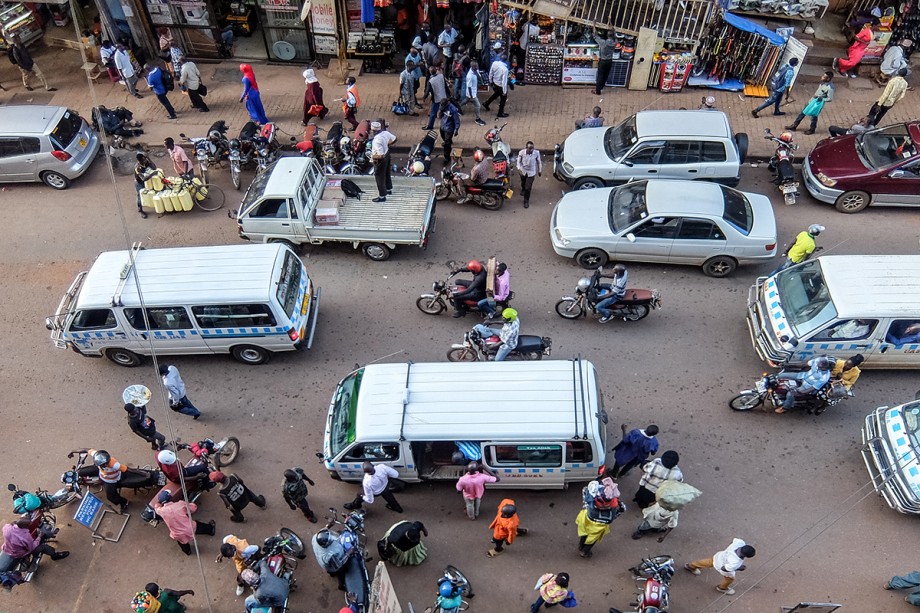 The upper floors of buildings along William Street in Kampala are perfect vantage points from which police officers can watch for crime.

“This has left the criminals powerless, because it is hard to tell who to rob,” he says. “One could easily rob a police officer themselves.”

But the true heroes are ordinary people, Francis says, adding that he’s befriended people across the city.

“The lame watch repairer seated at the roadside has a powerful security tool: his eye. He will tell me if he sees anything suspicious,” Francis says. “The board game players who involve in city pastimes in crowded areas all have my phone numbers, and they feed me security concerns, if they see any.”

Even people who work on the upper floors of downtown buildings keep their eyes on what’s going on below, Francis says. 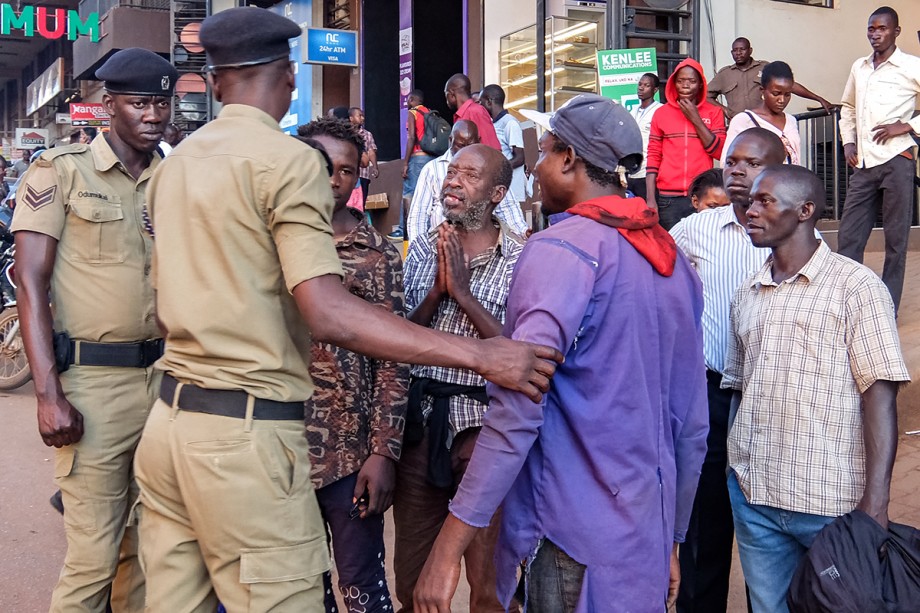 Police confront people who weren’t carrying identification while walking on William Street in Kampala. Police consider such people to be potential criminals.

The result? Petty theft has actually gone down as Christmas nears.

“Crime can only be curbed with the help of everyone,” Francis says.