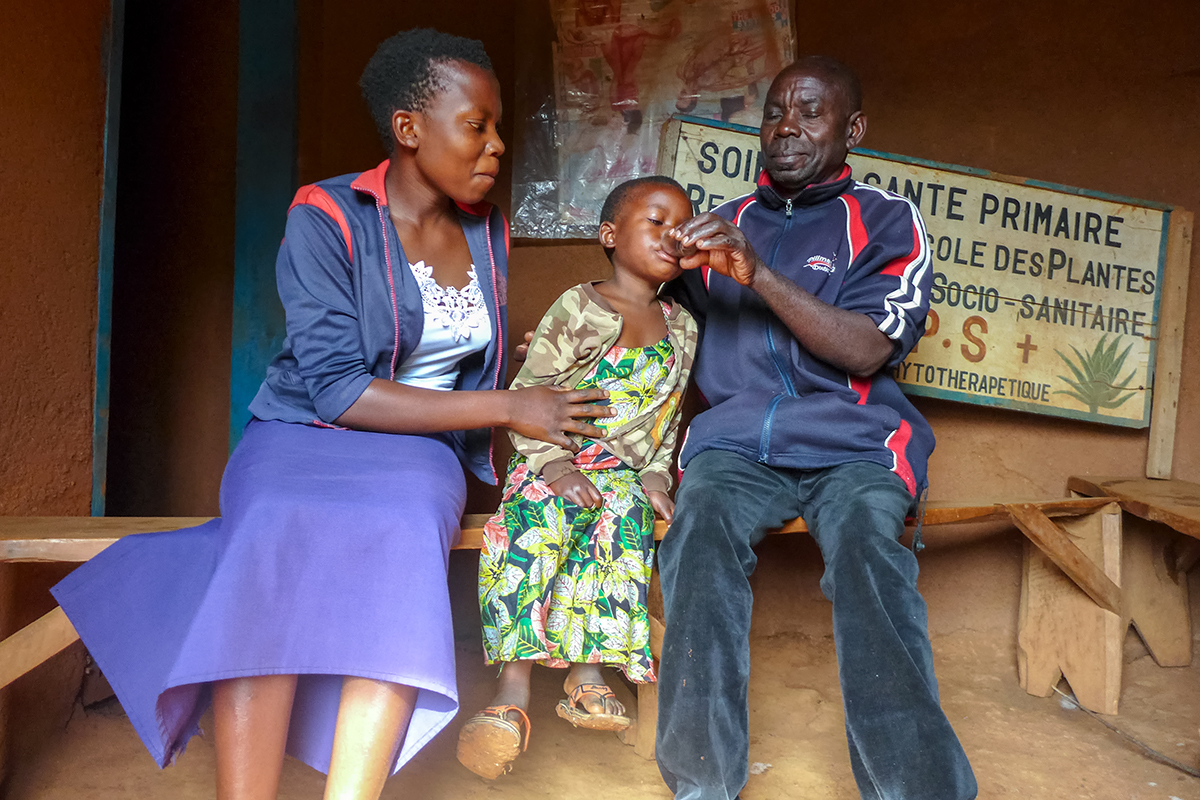 KIRUMBA, DEMOCRATIC REPUBLIC OF CONGO — It’s a short hike to get to Shadrak Paluku Lawindo’s herbal practice, which sits on a slope about 400 meters (1,312 feet) from a road.

Inside, amid bouquets of banana leaves, Lawindo sits on a bench, tending to a sick child. To Lawindo’s left are two small cans. One is filled with honey and the other with a liquid mixture. He’s looking for signs that the child has been poisoned.

A persistent cough, weight loss, chest pains that stretch to the shoulders – those are all signs of foul play, he says.

“I treat poisoned patients without me knowing substances that make up a poison,” he says.

The ingredients of the poison, known as karuho, are a mystery. But word on the street in this rural town in Democratic Republic of Congo’s North Kivu province is that it includes cement powder and ground reptile skin. Malicious people sprinkle the powder into food and drink, then offer it to people they hope to injure. 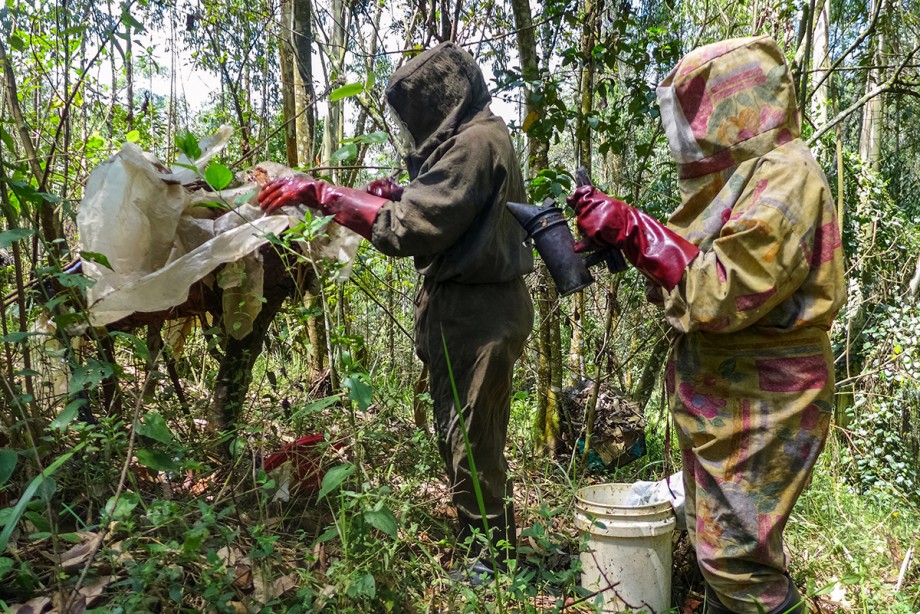 Local people say that poison is usually sold by people who combine herbalism with spiritual practices. Some of those same people also offer cures for poison. (Lawindo says he doesn’t make karuho – he only cures people who were poisoned.)

This isn’t anything new. People here say that poisoning cases, and rumors of poisonings, have haunted their community for generations. But these days, they say, more people are falling ill. Proving that poison caused someone’s illness is difficult, but the consensus here is that there are more poison cases than ever before.

The question on everyone’s mind is: Why?

Paluku Mudoa, who lives in Kirumba, has a hypothesis. It’s because of the town’s new residents, he says.

“Poisoning case were rare, even non-existent, before the coming of internally displaced people in the 1990s,” he says.

People in Kirumba remember the mid to late 1990s as the time when people from other places, including from as far away as Rwanda, began to flood into the area. The years after that first influx were tense, but Kirumba eventually morphed into a new kind of town, with new kinds of people.

Then, in 2017, another wave of newcomers fleeing their homes arrived, this time from the nearby Rutshuru region and throughout Lubero territory. They were escaping from armed groups known as Mai Mai, who are known to violently seek control of territory or clash with government forces. Nearly 5,000 people have come to Kirumba seeking shelter over the past two years, says Pablo Paluku Haliposo, who leads Kirumba’s office for internally displaced people.

That influx pushed the town’s population to about 80,000 people, according to data provided to Global Press Journal by Shangilia Kavali, a town official. And more people arrive each day.

Kavira Ndoole says she left the village of Mine-Somikivu in Rutshuru territory to seek the relative safety of Kirumba in 2015. She brought her seven children with her. Life is extremely difficult, she says.

“No one cares about us,” she says. “Our neighbors throw leftovers in trash bins when we need them to survive. They can each have three clothes whilst we walk almost naked.”

While some internally-displaced families live in the homes of longtime Kirumba residents, there isn’t much support for people in need. To accommodate the newcomers, families share their homes (read more about that here), which soon become congested compounds. Private lives are no longer so private.

New residents struggle to make ends meet while longtime residents feel pressed for the space and tranquility of years past.

I treat poisoned patients without me knowing substances that make up a poison.Shadrak Paluku Lawindo

Lawindo, the herbalist and traditional healer, says he’s well-equipped to treat people who have been poisoned. He’s been doing it since 2000, he says. Early on, he used a combination of aloe vera, local medicinal plants and other ordinary ingredients.

Those treatments were a long shot, he says.

“Though the treatment could, indeed, result in complete recovery in some, most patients couldn’t survive,” he says.

In 2015, he says, he attended a seminar for traditional healers in the area. There, he learned to use honey to treat people who were poisoned, either by itself or combined with other ingredients. Since then, Lawindo has maintained his own beehives. He uses the honey it produces as the base for his poison treatment.

The treatment is expensive – between nearly 33,000 to nearly 50,000 Congolese francs (about $20 to $30). That’s a huge sum in this area, where many people earn the equivalent of just $1 per day. A half-liter of ordinary honey costs about $5 in stores.

Some patients refuse the pay the bill, Lawindo says, but for many, it’s the only option to survive a poisoning.

Honey is a common ingredient in natural remedies around the world. It’s considered by some to be effective in curing food poisoning, and researchers have found that it’s used in some places as a treatment for venomous snake bites.

The problem for Lawindo and even medical clinics that attempt to treat karuho-induced illnesses is that there’s no standard ingredient list for this type of poison.

Désiré Kasereka Matambo, a laboratory technician at Firstly Health, a private laboratory, says symptoms of karuho include jaundice, a lack of appetite, abdominal pain, dizziness, abnormal blood pressure, abnormal skin color or an enlarged liver. Those symptoms are distinctly different from those that Lawindo lists, but both Matambo and Lawindo acknowledge that karuho is a general term for a variety of different types of poison.

People in Kirumba say there’s no question that Lawindo’s treatment is effective.

Ghislain Musubaho Ramazani, a technician at a local radio station, says his uncle was poisoned and tried various treatments at local health clinics.

Nothing worked until he took Lawindo’s honey mix, says Ramazani.

His uncle, he says, made a full recovery.