The ground has settled since a 7.8-magnitude earthquake killed nearly 9,000 people in 2015, but life for many people in Nepal remains precarious.

For years, the National Reconstruction Authority (NRA), tasked with reconstructing more than 800,000 damaged homes and other buildings, has struggled to make progress.

Two years after the quake, only about 28,000 of those homes and buildings – about 3.4% of those that qualified to receive government assistance for reconstruction – had been rebuilt. (Read our coverage of post-quake reconstruction here.)

Four monsoon seasons and frigid Himalayan winters after the quake, the NRA finally made significant headway, according to its records. The agency’s website states that more than 415,000 houses are completely rebuilt and that reconstruction has begun on another 26% of houses. The cost to rebuild every house damaged by the earthquake is estimated to be about $7 billion.

However, despite the rapid uptick in reconstruction, serious delays and gaps in assistance remain. 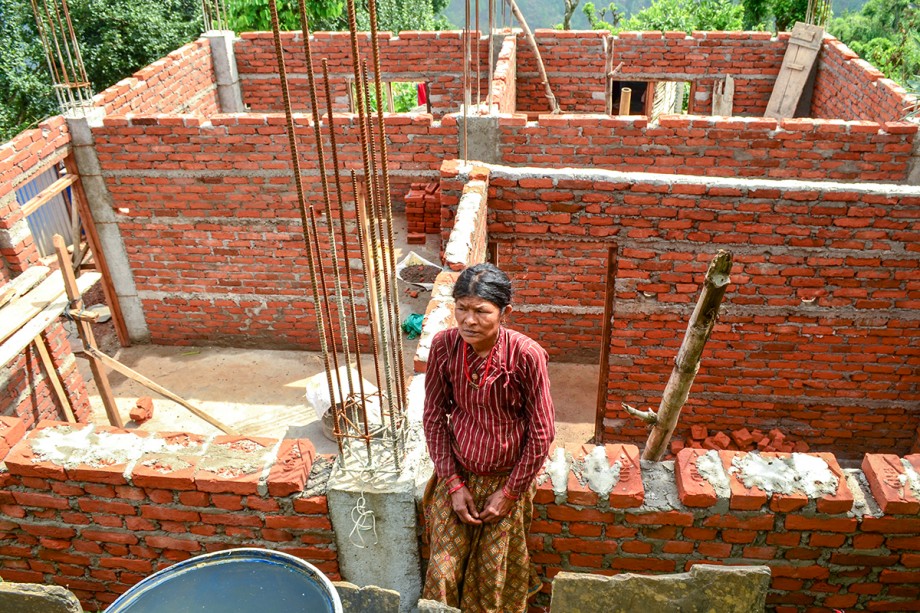 Man Kumari Shrestha, pictured in 2017, sits on the unfinished wall of the home she hoped to build for her family in Kumpur, Nepal. Shrestha received a government grant to pay for the project, but the money ran out well before the house was rebuilt.

Nearly a third of people affected by the earthquake say the government hasn’t addressed their main reconstruction needs, according to a survey done by the Inter-Agency Common Feedback Project, a research group funded by the UK government. This is especially the case in Solukhumbu district, where more than three-quarters of respondents said their most dire needs are still unmet.

Perhaps the most pressing need is for barns, known locally as cattle shades, which aren’t covered by the reconstruction grants. Without the ability to properly care for their livestock, many Nepalese are forced to sell their cattle at low prices.

Another problem with the reconstruction process is that the money offered in government grants isn’t nearly enough to rebuild a home.

Most reconstruction aid from the government comes in the form of NRA grants – grants which come in three waves and total about 300,000 Nepalese rupees (about $2,700). That’s less than a third of the cost of a conventional house in Nepal, according to a 2018 study from the University of Texas. In urban areas, the cost to rebuild a house can reach up to $40,000.

Some research suggests that Nepal may be prone to similarly destructive earthquakes every 75 years. Such an earthquake struck the area in 1934, killing about 20,000 people. Now, there’s an emphasis on making reconstructed buildings earthquake-resistant.

But that emphasis doesn’t help people who still need homes. As of November 2018, according to the Inter-Agency Common Feedback Project, 34% of people affected by the earthquake were still living in temporary shelters or in homes that were unrepaired.