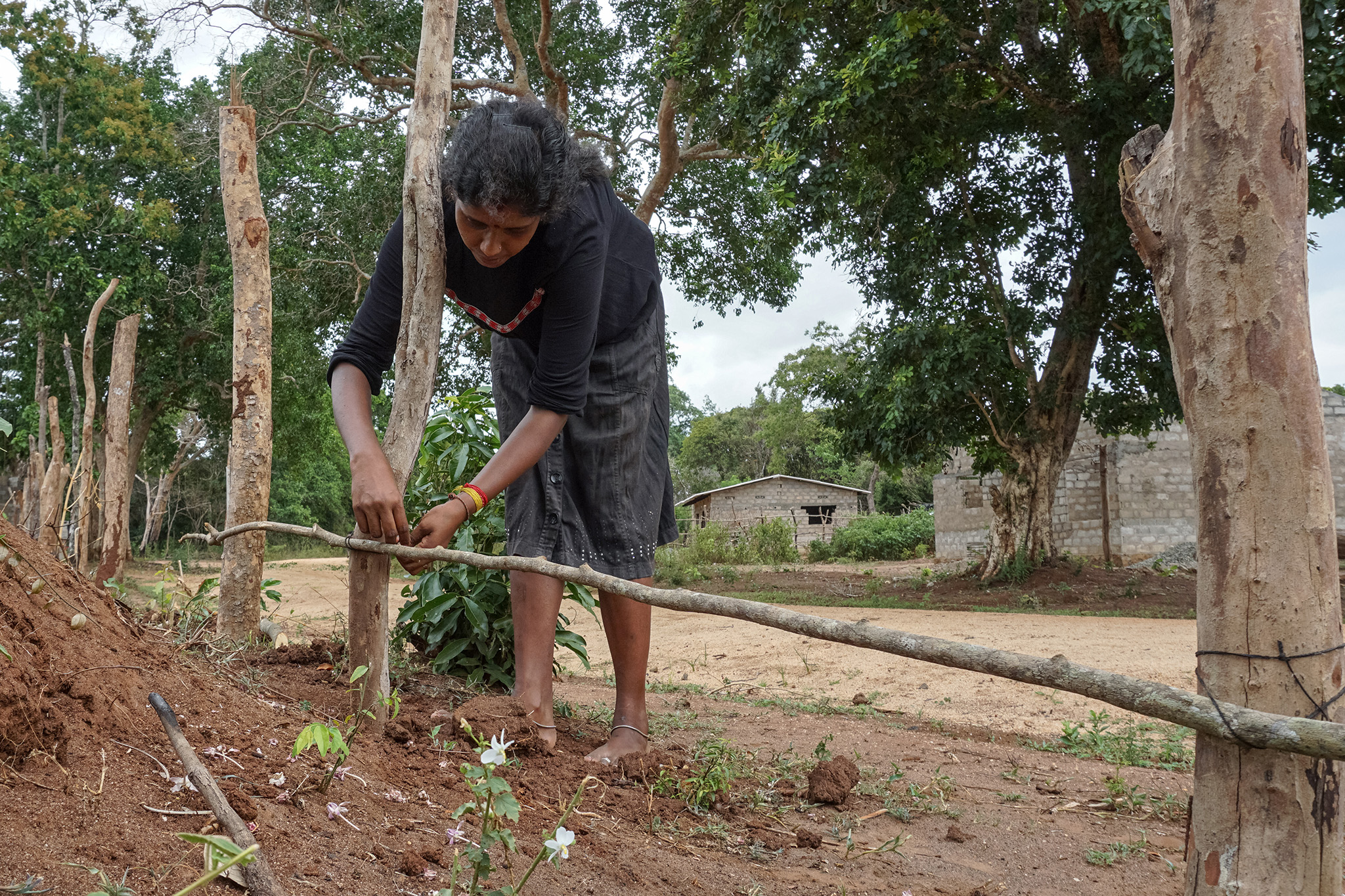 KANCHOORAMODDAI, SRI LANKA — Manokaran Sarojini returned to her family’s land in 2018, 26 years after fleeing Sri Lanka’s civil war. She imagined clearing her 2 acres to grow eggplant, okra and tomato. She dreamed of living out her days there with her husband and three children.

But reality was more complicated.

Not long after her return, Sarojini learned that the land was no longer hers. It belonged to the government.

Local officials had turned it into a nature reserve. In the eyes of the law, she was again without a home.

“This is where your mother lived,” she says a relative told her. “This is your own land.”

About 38 families in the village of Kanchooramoddai face a similar plight, but throughout the country, they are far from alone. The government has promised to resolve the issue, but returnees’ lack of land permits and a lumbering bureaucracy have left many families in limbo.

And in a country where land is deeply tied to economic stability and progress, the lack of property makes it nearly impossible to start over.

Kathirkamatthambi Kurunathan, a retired land commissioner for the Eastern Province, has met with villagers on behalf of a nongovernmental organization and says tensions will only grow as Sri Lankans who fled their hometowns continue to return to their ancestral villages. He says documentation exists that shows who owned the land before the government turned it into a forest reserve.

“The people who are displaced will return gradually,” Kurunathan says. “Currently the villagers are beginning to come. When the rest of them come back, their lands will not be available to them, and it will be a problem.” 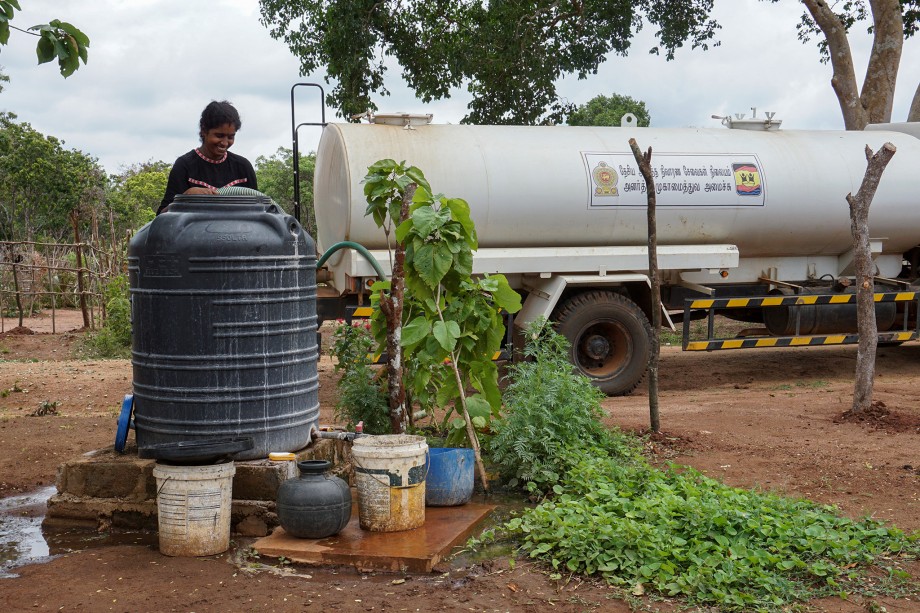 Manokaran Sarojini fills her tank with water from a truck supplied by the Divisional Secretariat of Vavuniya, the district where Kanchooramoddai is located. The village’s families do not have access to basic services such as electricity or running water.

The civil war in Sri Lanka, which ended in 2009 after nearly three decades, pitted the Liberation Tigers of Tamil Eelam against the Sri Lankan government. The conflict killed tens of thousands and forced another 146,000, most of them Tamil, to flee the country.

Hundreds of thousands were displaced within Sri Lanka, including 270,000 from northern districts such as Vavuniya, where Kanchooramoddai sits. Mistrustful of the Sri Lankan government, displaced Tamils have only slowly returned to their home villages.

Among those internally displaced was Sarojini, who left Kanchooramoddai in 1992 with her parents and lived in many places. Her parents died, and the title to their land was lost, leaving Sarojini without a legal claim to it.

Other returning families face similar scenarios. Some were internally displaced, while others fled to India as refugees. Kanakar Kanapathippillai, a former village resident and former chairman of the Rural Development Society for the area that includes Kanchooramoddai, says that before the war, 168 families lived here.

Mohamed Aboobucker Nafees, district forest officer of Vavuniya, says officials had no choice because after the war, outsiders invaded the land and began developing it. The government declared the area a reserve, he says, to ward off deforestation.

He says if officials can confirm who held those properties, owners will get their land back.

“If there is any private land in the declared area of forest, we will acquire the land properly,” Aboobucker says. “We will release those lands.” 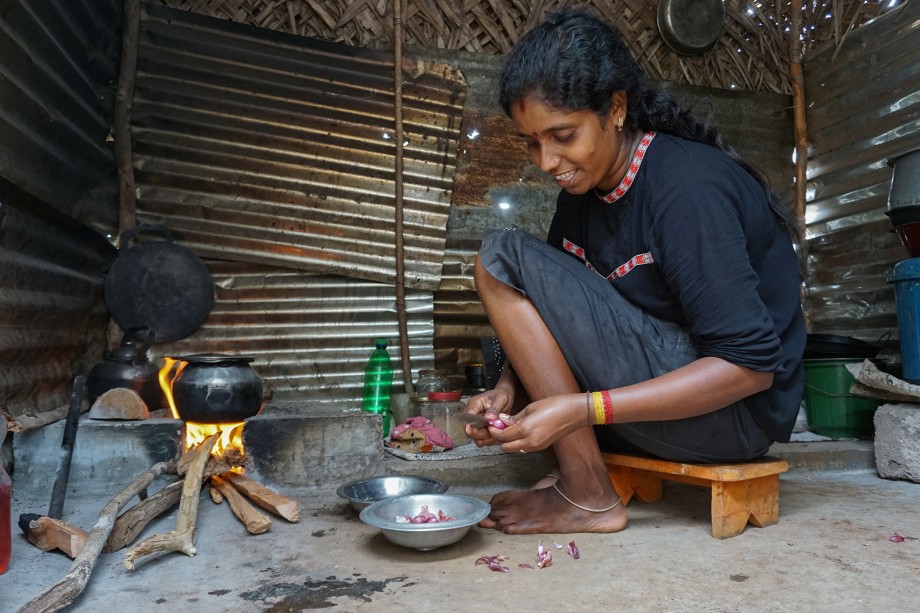 Manokaran Sarojini prepares meals at home for her three children. Sri Lanka’s civil war forced Sarojini and her parents to relocate to a nearby village. She moved back to Kanchooramoddai in 2018 and learned officials had turned the family’s land into a nature reserve.

Conditions in Kanchooramoddai are hard. It lacks running water, public transport, electricity and other basic services. Farming is the only path to a livelihood.

Anthoni Laxman returned to Kanchooramoddai in 2018, after his parents died. He planned to farm, but those efforts stalled because of the dispute with the government.

“There are no employment opportunities, so we have to work as laborers in the areas close by,” Laxman says. “If there is no job for more than two days, we are starving.”

Sarojini’s husband works as a driver at a children’s home in Jaffna district, 148 kilometers (92.5 miles) northwest of here, and earns 30,000 Sri Lankan rupees ($160) per month. The government’s Legal Aid Commission has also supplied goats to village residents, including Sarojini’s family.

After villagers launched protests in June and early July, the district secretary of Vavuniya met with Kanchooramoddai residents and promised to resolve the land issue in the next few months.

Sarojini, 34, says her family started clearing her land to farm when they returned, but the Forest Department ordered them to stop.

Sarojini defied authorities and settled on a small plot on the property anyway. That’s now where she lives with her children, ages 13, 10 and 5. Like other village residents, she says she won’t leave her land again for fear of losing it forever.

“This is our land,” she says. “We cannot give this to the forest.”

This story was originally published on August 16, 2020.

Thayalini Inthilakularasa is a Global Press Journal reporter based in Vavuniya, Sri Lanka.