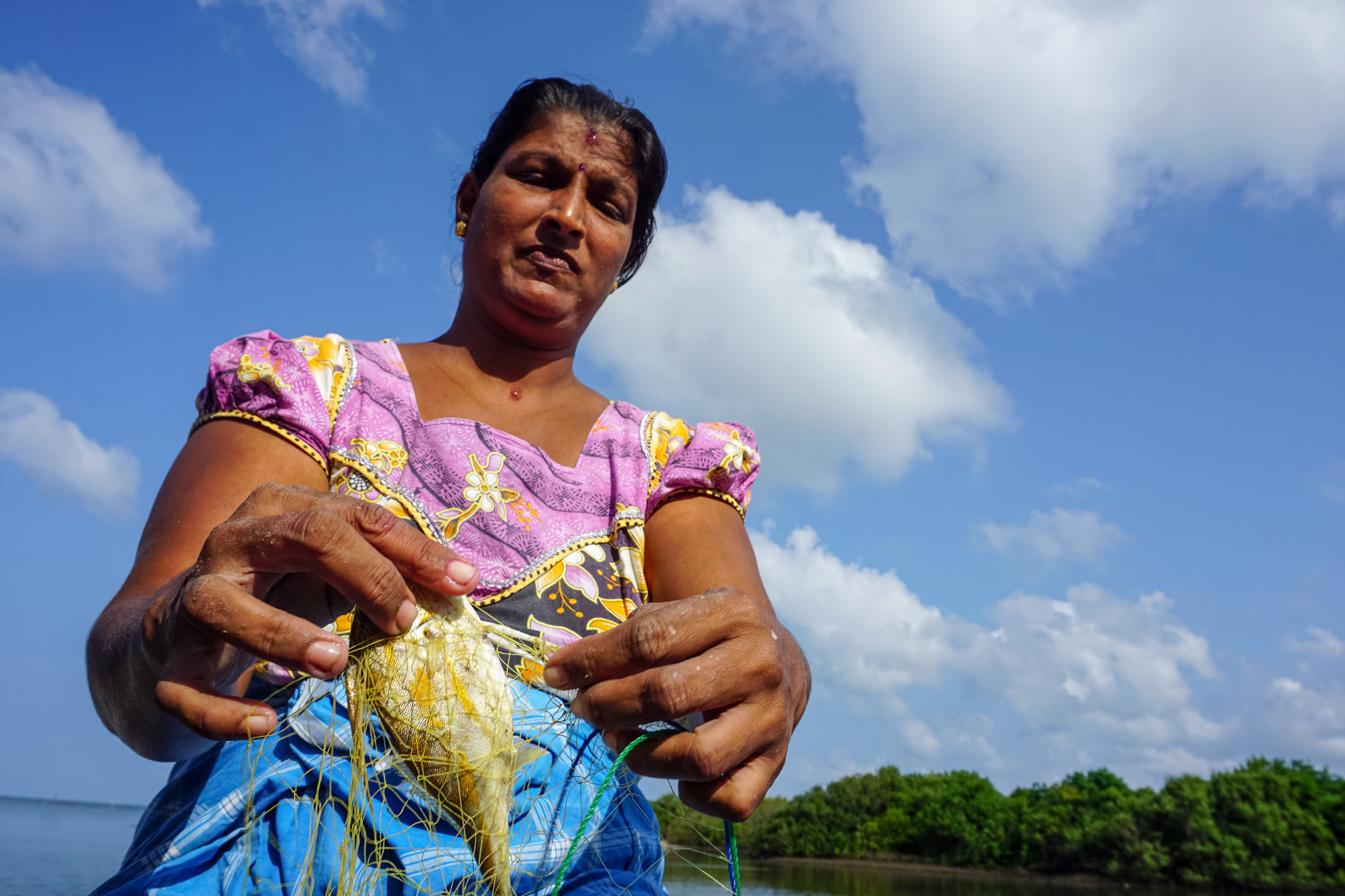 MANNAR, SRI LANKA — On Moonrampiddy beach, under the shade of coconut trees, Puthumairasa Juris Loratta sits in her family’s boat, picking the remains of the day’s catch out of fishing nets. Her husband, Kanikkairasa Puthumairasa, returns from selling the big fish at the local market, and together they select suitable small fish for drying.

For the two of them, both 42, this daily routine is unrelenting. Like many residents of this fishing community on Sri Lanka’s northwest coast, the couple is saddled with sky-high debts, which they have been struggling to repay for years. Their efforts were further undermined in December when a tropical cyclone slammed into the country, damaging boats, nets and other equipment — and forcing them to borrow even more money to cover the cost of repairs.

It’s a never-ending cycle that keeps fishers impoverished and indebted to local businesspeople. And as extreme weather, including increasingly intense storms, becomes more frequent, the burdens on families like Puthumairasa and Juris Loratta’s stand only to grow.

“We have borrowed loans from four places,” says Puthumairasa. “When we are about to pay back the debts, the net will get damaged.” 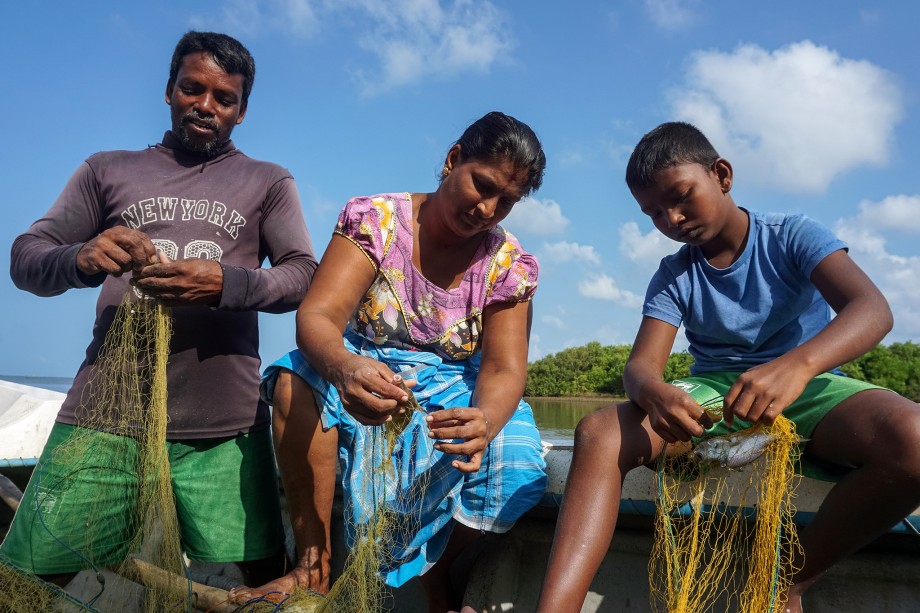 Puthumairasa Juris Loratta and her husband, with one of their four sons. After taking out loans to support their fishing business, they are struggling under heavy debt.

It has been five years since the couple initially borrowed 600,000 Sri Lankan rupees (about $3,069) from a local market known as a “vaadi” to set up their fishing business. Vaadis are common sources of loans in Sri Lanka — particularly for people like Juris Loratta and Puthumairasa, who were once successful fishers, but lost all their property during Sri Lanka’s decades-long civil war, which ended in 2009.

But these agreements typically do not favor the borrowers. It is an unwritten law, for example, that fishers who borrow money from a vaadi must sell their seafood only at that vaadi, according to Anthonipillai George, a senior program coordinator at ZOA, an international relief organization that is working with fishers in Sri Lanka to establish a fair-market system.

Fishers who fail to repay these loans risk damaging their standing in the local community, cutting them off from additional funds they might need to keep their businesses afloat. Furthermore, vaadi owners typically purchase the seafood at significantly below-market prices, which causes fishers to lose as much as 5,000 rupees ($26) a day, Anthonipillai says. Such losses make it extremely difficult for fishers to pay off their loans.

A worker’s median monthly salary in Sri Lanka is around 23,260 rupees ($118), according to 2016 data from the Department of Census and Statistics.

The government considers these loans to be private arrangements, and government officials say they are not authorized to comment on the situation.

Kandasamy Yogendran, 44, another local fisherman, says it has taken him 10 years to pay off his loan. He blamed the vaadi owners for preventing fishers from making a fair living, pointing out that seafood in Jaffna, the capital of Sri Lanka’s Northern Province, approximately 118 kilometers (73 miles) north of Mannar, sells for much more than what fishers are paid locally. 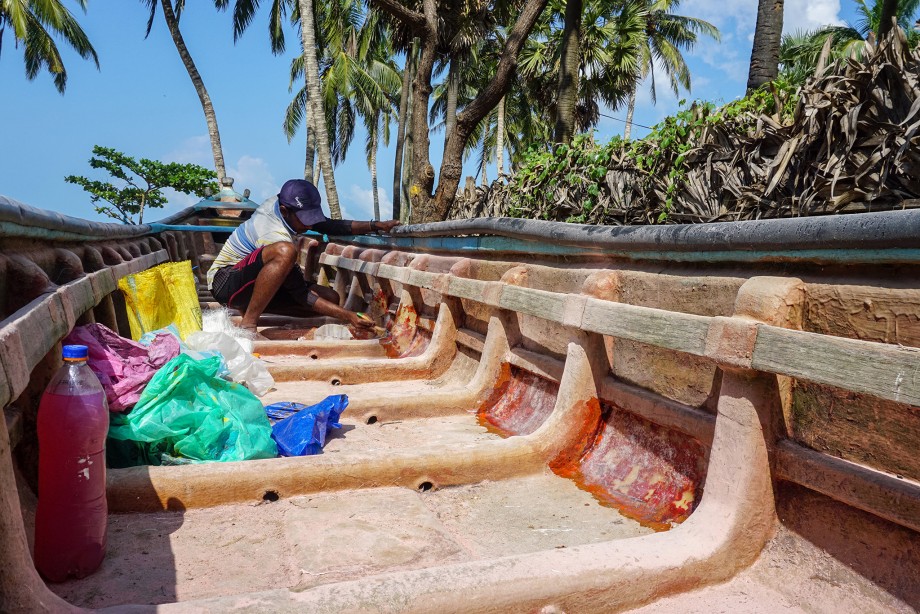 A fisherman repairs a boat that was damaged by the cyclone in December.

As their expenses piled up, Juris Loratta and Puthumairasa took more loans from banks and the Village Maritime Organization. Including the money they obtained from the vaadi, their loans eventually totaled more than 1.4 million rupees ($7,160).

“Not a cent has come home this week,” says Juris Loratta. “Whatever we earn goes to the debts.”

Arunthavarasa didn’t provide the loan to Juris Loratta and Puthumairasa, but he says it isn’t possible to offer money to fishers if he can’t make a profit from the arrangements. “Banks also charge interest rates, right?” he says.

Arunthavarasa says he is suffering financially as well. The storm in December destroyed the entrance to his vaadi, and he must pay to have it repaired. But the failure of fishers to repay their loans, he says, has drained his resources.

“From a young age, we worked in the sea and came to a good position,” he says. “We lent our capital in the name of faith; now that capital is also gone.” 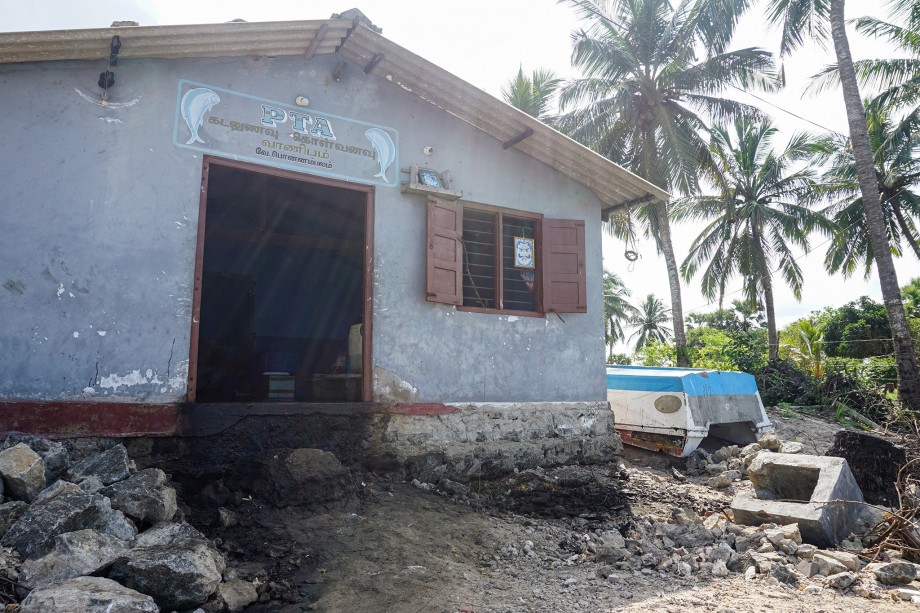 The entrance to Ponnampalam Arunthavarasa’s vaadi was destroyed during the cyclone.

Climate change is likely to continue affecting Sri Lanka’s communities in unpredictable ways. A quarter of the country’s population lives within 1 kilometer (0.6 miles) of the coast, making people vulnerable to sea-level rise. And while the frequency of cyclones in Sri Lanka declined over the 20th century, the intensity of the storms has increased in recent decades.

Even smaller storms like the one in December can be devastating for Sri Lankans who are already struggling. And while the threat of intense cyclones may loom on the horizon, debt is an ever-present fact of life for many, according to Emiliyanuspillai Denny Calistus, a Catholic priest who presides over religious services in Moonrampiddy.

“Debt is a barrier even to live a normal human life,” he says. “We are accustomed to borrowing. You can live only if you borrow. Borrowing from one loan to pay off the other. It will never end.”