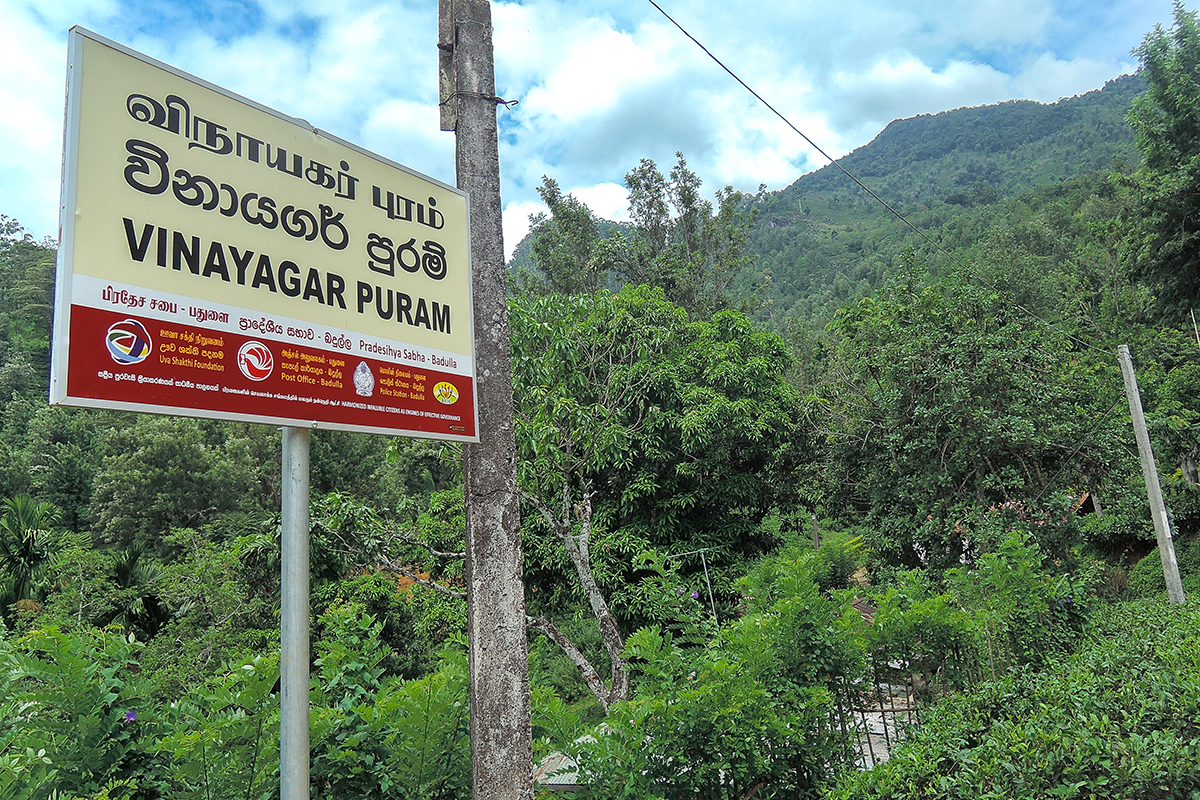 She was born in a family home, in a line room at the tea estate where her mother’s parents lived. Like on most plantations in Sri Lanka, the line room where Gnaneswary was born is a section of a long, narrow building divided into a few small areas. Most estate workers live crowded into line rooms in buildings separated by narrow alleyways.

Now 53 years old, Gnaneswary lives in a similar home on the Ury estate, another tea plantation. It’s the same home where her husband’s family has lived for three generations. But it wasn’t until this year that the room was recognized as an individual property, with a postal address to which she could receive correspondence.

INSIDE THE STORY: GPJ reporter Manori Wijesekera is used to asking questions. But while reporting in a tea estate community, the tables were turned when an interview subject asked her about her portrayal of the community. Read the blog.

Now, Gnaneswary’s home is number 05/8. The narrow, winding, gravel path that leads to it, which was nameless for generations, is now called Amman Lane.

There are practical reasons for which she’s happy to have an address. Prior to having one, mail was delivered in bulk to the estate. Letters were often lost. The communities often had – and still have – their own small grocery shops, shrines or even preschools, but none had specific, formally-recognized location names.

But Gnaneswary, who is illiterate, says her real joy in having an address comes from the dignity it brings her family.

“This address has given my family an identity,” she says.

The Mapagala division of Ury estate, where Gnaneswary lives, was one of 11 divisions across multiple tea estates in the Badulla district to have its street names gazetted and legally recognized by the local government this year as part of a campaign to assign individual postal addresses to estate homes. The change, which included the creation of 59 new street names, formally took effect in March and residents received their addresses in April. 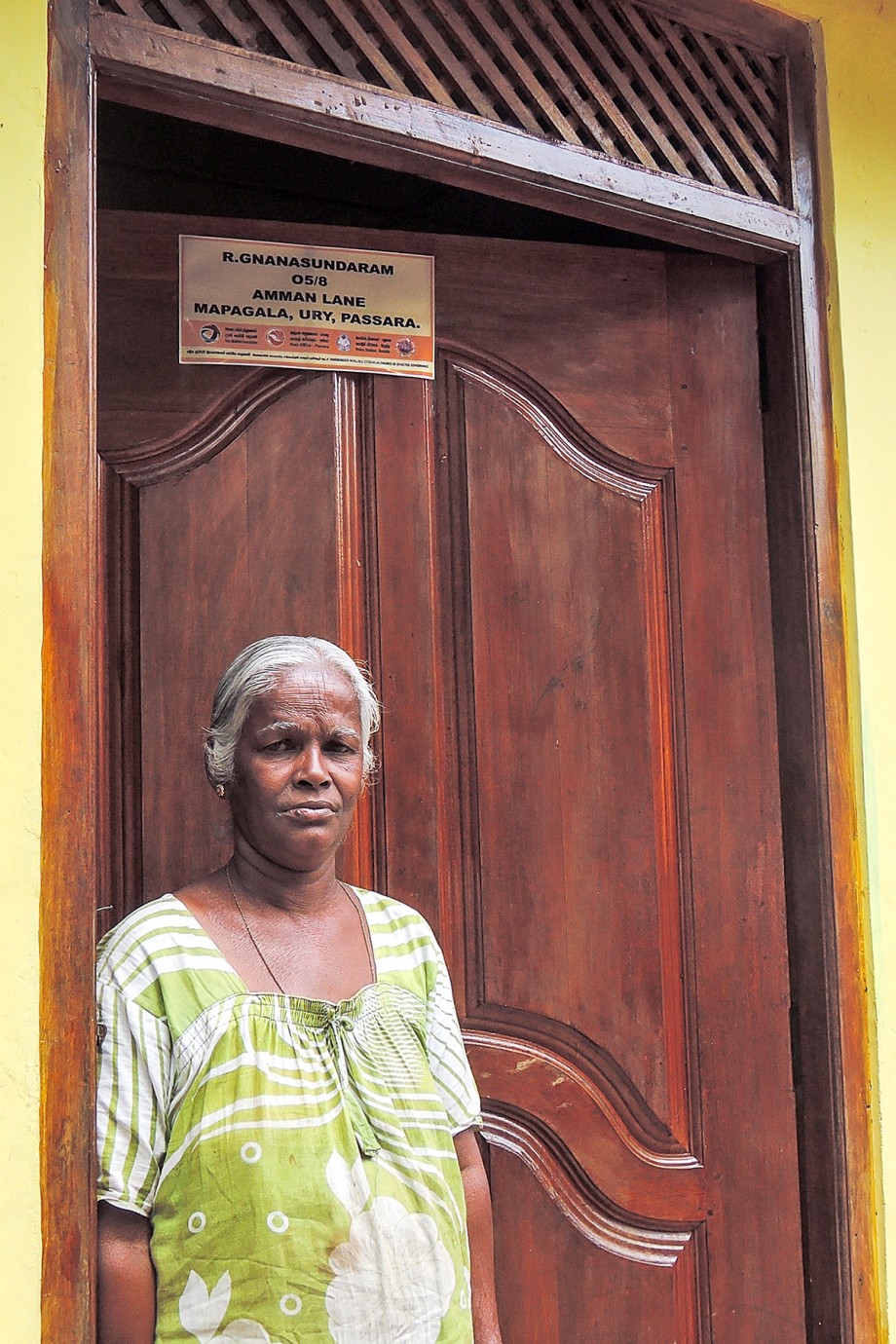 Vyndaraj Gnaneswary stands outside her front door in Passara, Sri Lanka, where her new postal address is prominently displayed. Gnaneswary says having a formal address is a form of dignity.

The change is part of a local effort, ongoing since 2008, to assign addresses to line rooms. So far, more than 7,300 line rooms now have addresses. The full campaign operates under the name Vilasam, the Tamil word for “address.”

But huge numbers of people are still without this basic service, and the campaign that led to addresses being issued so far is local, not national.

More than 900,000 people, or nearly 5 percent of Sri Lanka’s population, live on estates, according 2012 census data.

But just four of Sri Lanka’s 4,691 post offices – less than one tenth of one percent — are located within estates, according to the Department of Posts.

It was in 2008 that estate residents began to complain to the The Uva Shakthi Foundation, a Badulla-based social justice organization, that letters often went missing because they were delivered in bulk to the estates and often not distributed beyond that point.

The government made some small efforts to address the situation. The same year the complaints began to pile up, 500 postal workers were recruited to improve mail delivery on estates. Those additional workers are young men all recruited to serve the communities where they live, but even they faced challenges in delivering the mail to line rooms.

“Sometimes if people did not trust me, it caused many problems and difficulties because they would accuse me of not delivering letters to them,” says Alagan Ramaiya, the estate postal worker in the Agrathenna Division of the Ury estate in Passara.

That year, the Uva Shakthi Foundation sought to initiate a pilot project to create addresses for line rooms, but was met with resistance from local government officials, estate managers and trade unions, who saw the plan as a political ploy, says Sumith Abeykoon, secretary of the foundation. 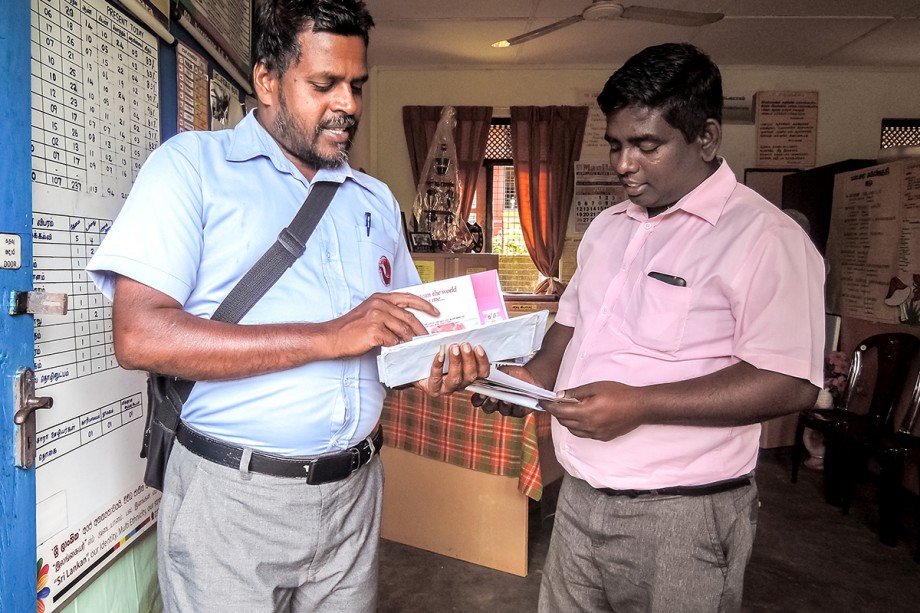 Alagan Ramaiya (left), delivers the mail to a teacher at a school in the Ury Estate, in Passara, Sri Lanka.

“Some of the estate management were not very open to the idea,” Abeykoon says. “Some estate managers have a lord and slave mentality; they feel that giving any right or service to the workers will lead to problems or their power over them being reduced.”

The foundation continued pushing for addresses, though, and eventually launched a few small pilot projects. About 150 homes in the Uva Highlands estate in Badulla were granted addresses, but street signs – a key detail in ensuring efficient mail delivery – didn’t come until years later.

By 2010, the foundation scaled up the project to 600 homes in the Madulsima area. That’s when organizers began to conduct formal mapping work, with help from a few other organizations, to formalize transit areas and homes and create road names and location markers in the winding pathways that serve as the main avenues for estate workers, Abeykoon says.

Sri Lanka’s tea industry, which marks 150 years this year, depends in part on tea estates, the agricultural plantations first developed by British colonialists. Today, the estates are home to about 900,000 people – about 5 percent of Sri Lanka’s population.

In many cases, families live on tea estates for generations, sometimes using the same home for decades. They are often isolated within the tea estates and have limited mobility, making it difficult or even impossible for them to move to find better, higher-paying work. Many estate workers live in poverty, and their working conditions, housing and medical care have not improved in decades.

In recent years, estate workers have pushed for wage increases, sparking hope among many in the agricultural sector that change is possible. Read our January story on those efforts here.

During a campaign that ran from 2012 to 2014, when local officials began to seem more open to the idea of postal service within estates, Abeykoon says, the Uva Shakthi Foundation applied for postal addresses in six divisions, covering more than 3,500 homes.

The foundation didn’t realize the significance of the Vilasam campaign at the start, Abeykoon says.

“We thought that helping them get an address would be one small dignity they achieve, it may not be much, but it would be a start,” he says.

But it turned out to be more than merely an address. Estate workers were connected, via their formal addresses, to the local government.

“The estates are private companies and operate separately from local government programs, even though there were people living on the estates who had the right to access government services,” Abeykoon says.

When streets are gazetted, the government becomes responsible for maintenance and services for those areas, not to mention providing sign posts for the newly-minted roads. Road maintenance funds are kept in a general pool and needs are prioritized as they arise.

So far, the only cost to the local government has been the signposts, says M.A. Cader, who was chairman of Pradeshiya Sabha Passara, an elected government body, when the formal gazetting process for the addresses in the 11 estate divisions occurred.

Many of Cader’s Pradeshiya Sabha members only came to know that estate workers did not have a postal address when the new street names proposal was discussed, Cader says.

“We all take a postal address as a normal privilege, it’s not something big for us,” Cader says. “But when you realize there are people who do not have an address of their own, in spite of living in the same house for more than three generations, you realize there is something wrong.”

Now, people who live in other estates are organizing themselves to get addresses for their homes, too.

Selliah Sivadas, a resident of Queenstown Estate, a tea estate in the Badulla area, is working with others to gather census and mapping details. The group hopes to approach local government officials to request that roads in the estate be gazetted.

Sivadas has suffered in the past because he doesn’t have an address, he says. In 1998, he never received a letter informing him that he’d been called for an interview that could have led to a job as a teacher. When he showed up at the district education office in person to inquire about his application, he was told that he had missed his chance. He wasn’t allowed to reapply.

“I had to wait 10 more years to get another job,” Sivadas says.

Ironically, the new job was as an estate postal worker, delivering letters from the Hali-Ela post office to homes on the Queenstown Estate, where he lives.

Sivadas knows that it could take years before residents of Queenstown Estate have formal addresses, but he plans to keep pushing for it, he says.

“It’s not something that individuals can easily do, but it’s something we need to do,” he says. 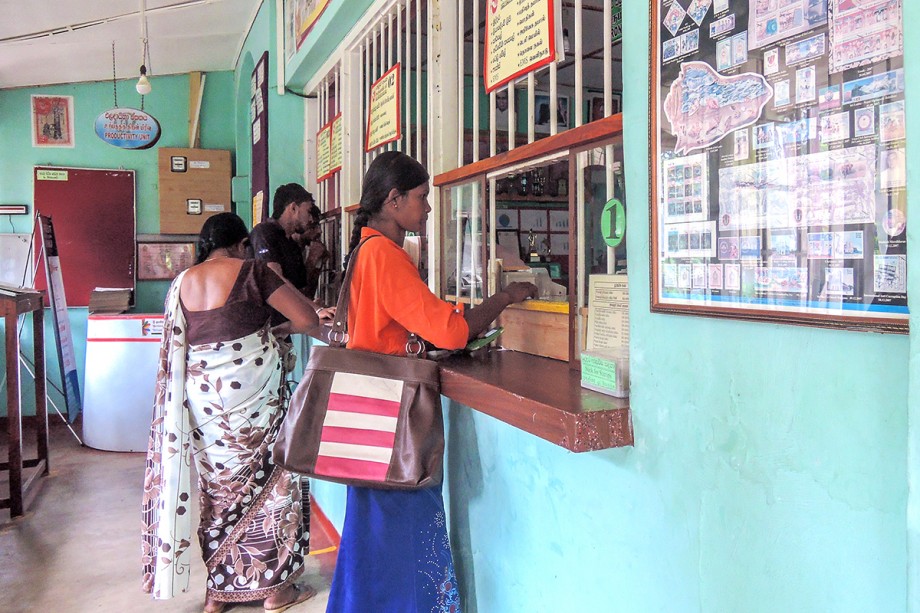 Customers go about their business at the Passara Post Office in Passara, Sri Lanka.