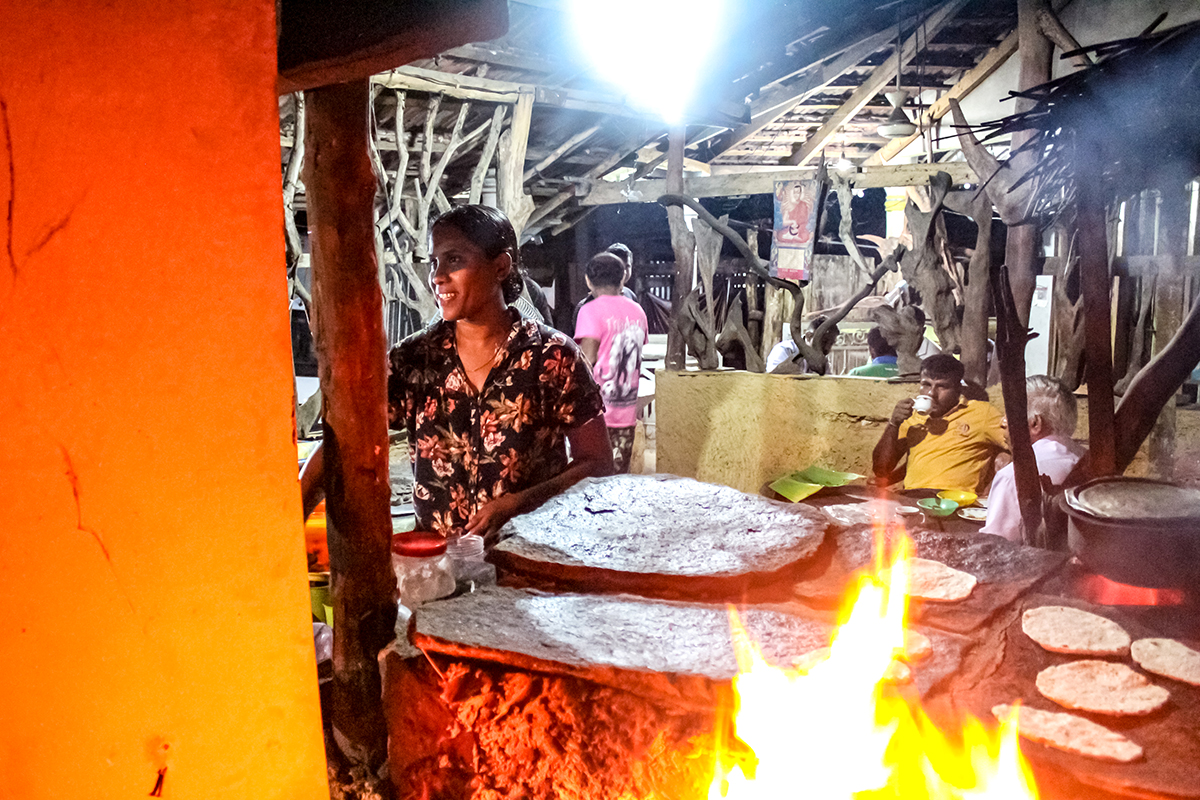 KIRIELLA, SRI LANKA — As you approach the township of Kiriella on the Horana-Ratnapura road, you’ll find a small roadside restaurant. There’s nothing fancy about the place. Nondescript would be the best description. There is a simple banner stating its name.

And yet there is no lack of customers at Gal Thetiye Pol Roti. The humble and the proud, rich and poor, and indeed people from all walks of life frequent the establishment.

Why? It’s probably because they have discovered the establishment’s humble roti.

Roti is a flatbread made of whole-wheat flour, and simple to make. In Sri Lanka, it is typically cooked on a heated, flat pan. But what makes the roti of this roadside restaurant so special is that it is baked on a slab of granite instead of on the griddle or hot pan commonly used. 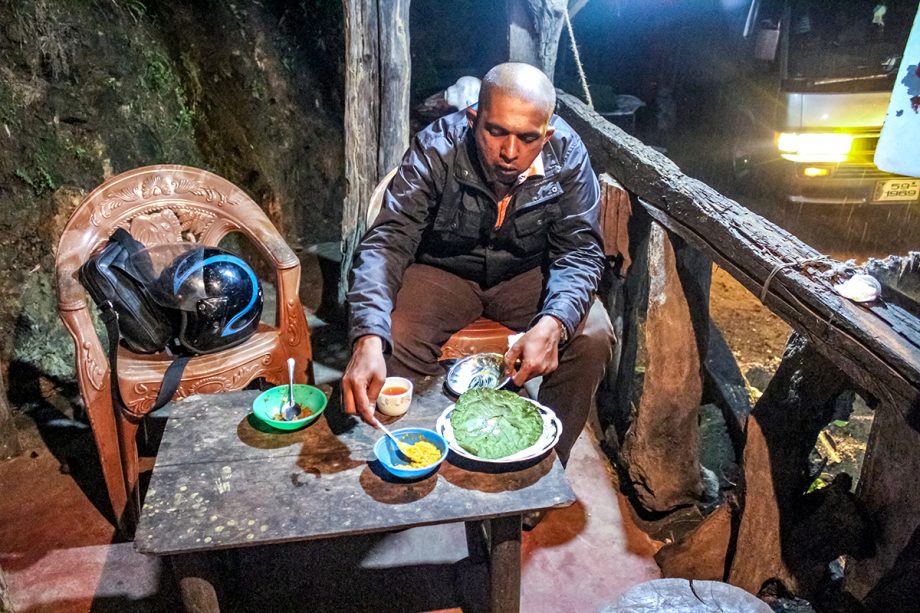 A customer of Gal Thetiye Pol Roti eats a roti. On his table, he has dhal curry and a spicy relish made of onions and hot peppers, as toppings to the roti, as well as a cup of tea.

K. W. Gamini Milton and H. A. Ayra Damayanthi, the owners of the humble eatery, named their restaurant after their specialty dish, Gal Thetiye Pol Roti, which in English means coconut roti cooked on a heated slab of granite. This variety of roti has shredded coconut mixed into the dough.

The restaurant, which can accommodate about 10 people at any given time, has a floor made of cow dung and clay – traditional building materials in Sri Lanka that keep the room cool and sanitary.

The space is full of roti ingredients and extra additions, such as flour, shredded coconut, salt, dhal curry – a curry of lentils – and a spicy relish made of onions and nai miris, an intensely hot pepper also known as cobra pepper. The customers, if they so wish, can wash it all down with a cup of hot tea.

“We decided to use a thin slab of granite for the simple reason that we didn’t have enough money to buy even a roti ,” says Damayanthi, referring to a pan, which is also used for cooking pizza.

Before opening Gal Thetiye Pol Roti, the couple had a kiosk selling kola kenda, an herbal porridge. But, as Damayanthi says, the demand for kola kenda was not high enough to support their family.

“There were many days when my husband, two children and I suffered without any food to eat. We didn’t give up hope, however,” she says.

Instead, Damayanthi thought about family stories of times past. She remembered a story about her grandparents using granite for their family cooking, so the couple went looking for a piece of rock suitable for cooking roti.

“First, we experimented,” she says. “We purchased a kilogram of flour, made the dough, lit a fire under this make-shift pan, heated it and made roti. It worked.” 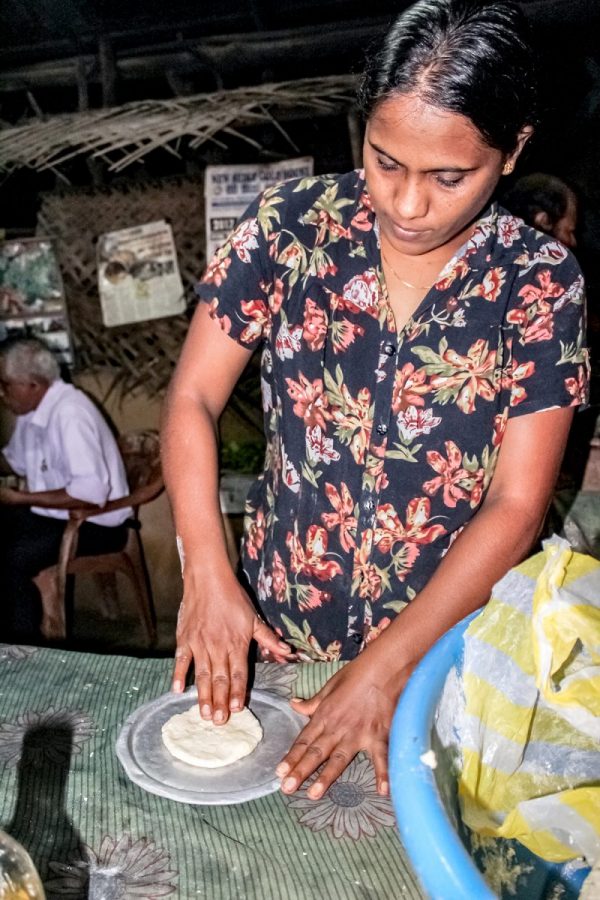 H. A. Ayra Damayanthi prepares a roti, made of whole-wheat flour, to cook on the hot granite.

So they opened a business centered on a granite slab – and their business soon began to prosper.

“It was from the profits that we were able to turn what used to be no more than a shack into the house you see here,” she says, pointing to the small building in the middle of the property behind the restaurant.

Although it was the cooking method that enticed customers, it’s the delicious roti that keeps the restaurant busy.

Prashan Boniface, a resident of Colombo, has been frequenting the eatery for more than a year and a half. He says he was drawn to the place out of curiosity, because he wanted to know if a roti made on a heated slab of rock tastes different than one from a pan.

“Almost everyone who comes here take photographs of our stove,” Milton says. “They are intrigued by it.”

Some 40 people stop by the restaurant on an average day, says Nimal Chandrasiri, one of the restaurant staff. The total rises on weekends and holidays. A roti costs 30 Sri Lankan rupees (about 20 cents), but Milton says they will have to raise the price to 40 rupees (about 25 cents) because of inflation and the rising costs of the ingredients.

The restaurant uses roughly 15 kilograms (33 pounds) of flour and a large quantity of fuel every day, says Milton, pointing to the restaurant’s pile of firewood. It takes five hours of intense heat to heat the granite slab. This largely determines their business hours, he adds, as they open their restaurant in the afternoon but are not ready to cook the rotis until around 8 p.m., when the granite is hot. 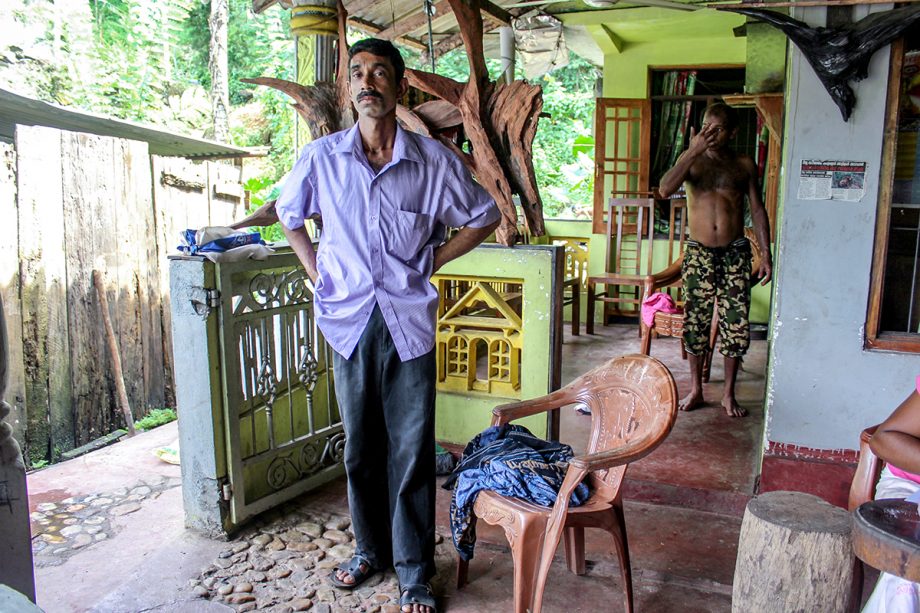 Nimal Chandrasiri is one of Gal Thetiye Pol Roti’s employees. Among other duties, Chandrasiri helps maintain the fire that heats up the granite slab where the rotis are cooked.

Kalinga Weerakoon, who is from Panadura, a coastal town in the Kalutara District about 50 kilometers (31 miles) away, has been a loyal customer of Gal Thetiye Pol Roti for about two years.

He says he learned about the restaurant through a friend, and he stops by whenever he is traveling. He says the roti is reasonably priced, he enjoys the ambience and it’s a special experience.

“This is a very rural area. The surroundings are pretty and quiet,” Weerakoon says. “More than all this, there’s an indescribable joy I feel when I sit here and eat a roti that has been cooked on this heated slab of rock. Stopping here to have roti whenever I travel on this road has become a habit, a must.”

There’s something else that is special about the Gal Thetiye Pol Roti: The owners believe others in the village have begun piggybacking on the restaurant’s popularity. 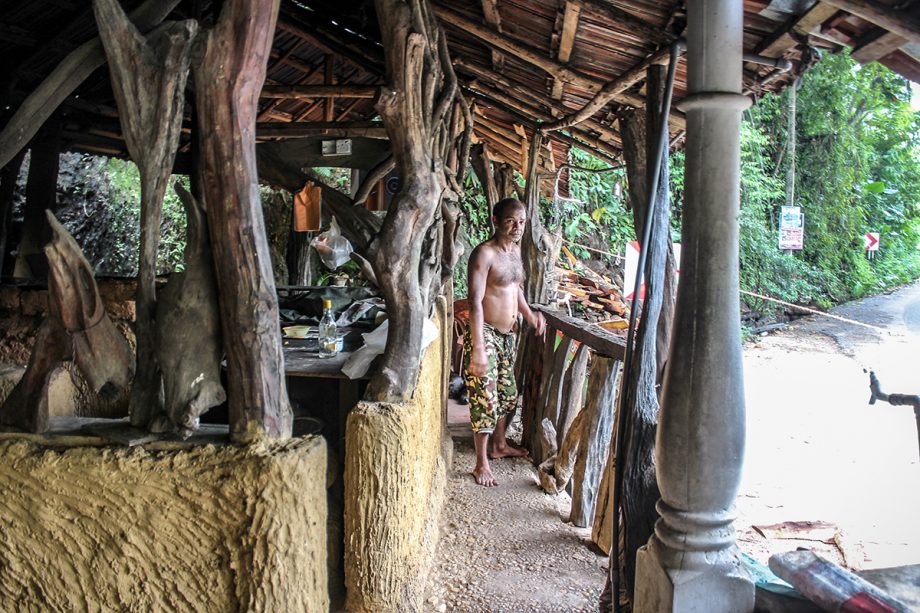 K. W. Gamini Milton, one of the founders and owners of Gal Thetiye Pol Roti, stands at the entrance to the restaurant.

“When we open shop, other traders come near the restaurant and lay out their various wares. They are strengthened by our success,” Milton says. “Those who patronize the restaurant often buy fruits like rambutan or various ornaments that they sell. This pleases us a lot.”

Traders were not the only ones who recognized the income potential in Gal Thetiye Pol Roti. Milton says that after the restaurant was featured in a few newspapers, they received an offer to sell their business.

“We were not interested,” he says. “How could we bring ourselves to sell this little operation that we built from scratch and with so much effort?”

Instead, Milton is focusing on their future plans. He wants to keep the restaurant as is, with the same floors and rock benches as now. Damayanthi, however, would like to expand the space and make a few upgrades to the décor. Milton says he won’t oppose her.

“I am hopeful that one day, when our children grow up, they will further develop the Gal Thetiye Pol Roti restaurant,” Milton says.