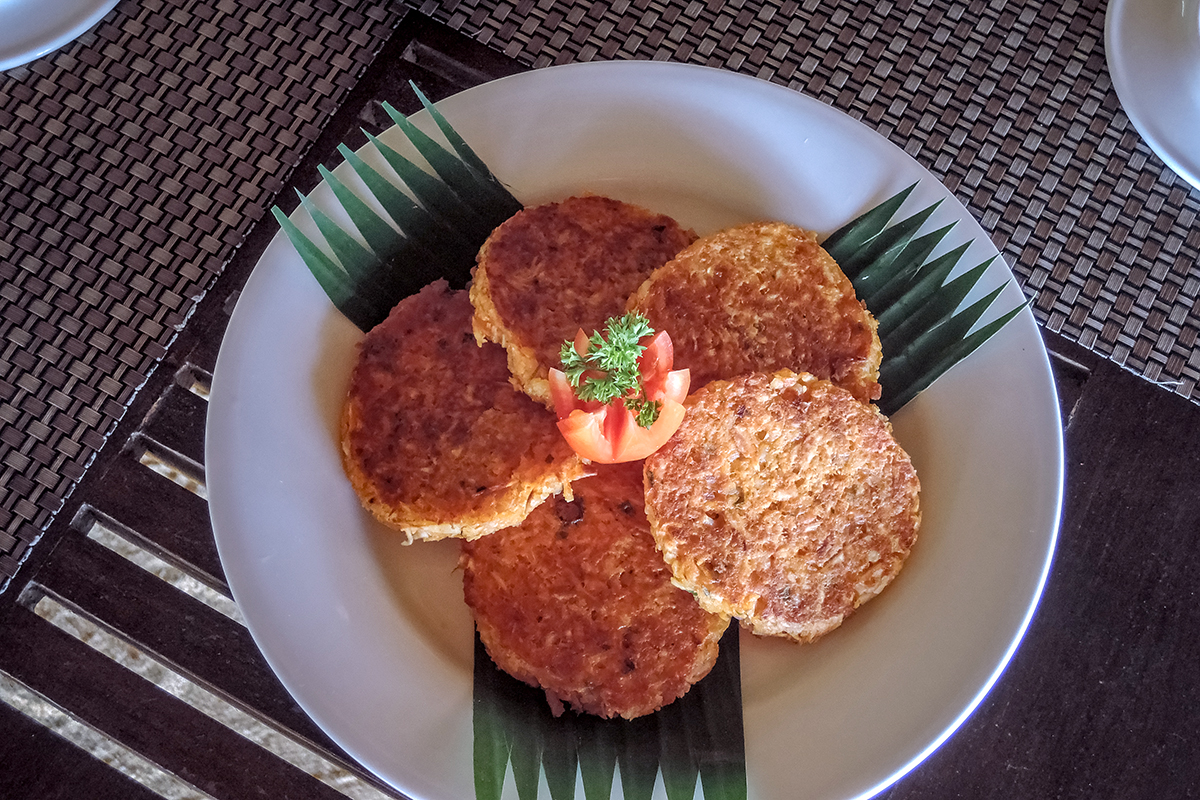 MOUNT LAVINIA, SRI LANKA — The young Deshabandu Dr. T. Publis Silva had no knowledge or even dreams of cookery when he first arrived at Mount Lavinia Hotel, a heritage hotel in Sri Lanka, in 1956.

He was a 19-year-old looking for work.

A secondary school dropout from a poor family in a small village on Sri Lanka’s southern coast, Chef Publis had many odds stacked against him, he says.

But succeed he did, rising through the ranks in the kitchen to become executive chef of Mount Lavinia Hotel in 1982, and since 2003, the hotel’s director of culinary affairs. In 2004, Chef Publis was awarded an honorary doctorate from the Open University of Sri Lanka and in March 2017 he received one of Sri Lanka’s highest civilian honors, the title of Deshabandu, from the president of Sri Lanka, in recognition of his service to the country. 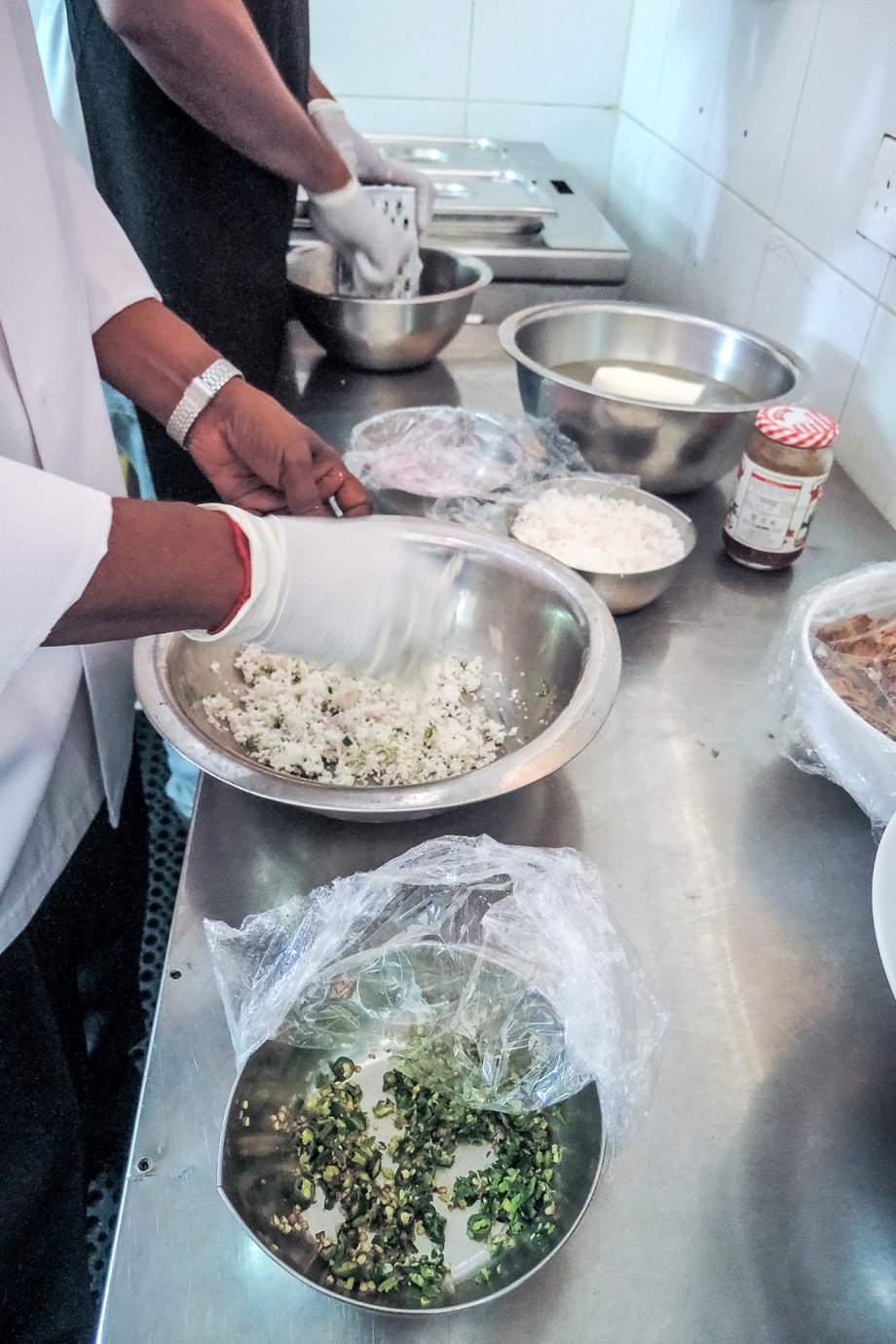 Chef Publis mixes grated coconut, one of the main ingredients of manioc roti, into a bowl with chopped onions and green chilies.

Harinda Weerasinghe, resident manager of the Mount Lavinia Hotel, has worked for more than 30 years with Chef Publis. Weerasinghe says the chef has single-handedly promoted Sri Lankan cuisine, making it a popular and exciting cuisine not only internationally but also in Sri Lanka.

“He always had a passion for Sri Lankan cuisine,” Weerasinghe says. “He made it popular to make your own curry powder, to make Sri Lankan dishes with local produce and to make it fresh without any processed or artificial ingredients.”

And the chef practices what he preaches, Weerasinghe says. All Sri Lankan dishes served at the hotel are made with fresh ingredients, using no artificial flavoring or ingredients, he says.

Today, Chef Publis is the author of 23 cookbooks, including a miniature cookbook of recipes from the royal household of Sri Lanka’s last king.

In celebration of his 80th birthday, in April, he released his latest book, a 1,000-page tome titled “Mahasupavansaya,” or “The Great Chronicle of Culinary Art.” The book is currently being translated into English.

The book, inspired by Chef Publis’ travels throughout 30 countries – including Sri Lanka – is a historical account of how the art of cooking developed in different regions of the world. Recipes are shared within the pages, and a documentation of nearly 1,450 different kinds of vegetables, fruits, herbs and edible plants is provided.

Traditional, fresh, local – and medicinal
Chef Publis says his journey into healthy cuisine and understanding the nexus between Sri Lankan food and traditional medicine came as a result of an embarrassing incident.

“One day in the late 1960s an Indian journalist asked me how many medicinal herbs we used in Sri Lankan cuisine – and I had no clue! I felt such a fool!” Chef Publis recalls. “But it got me thinking and I immediately started to write a list and discovered to my surprise that I regularly use 42 herbs and spices which are also medicinal ingredients.” 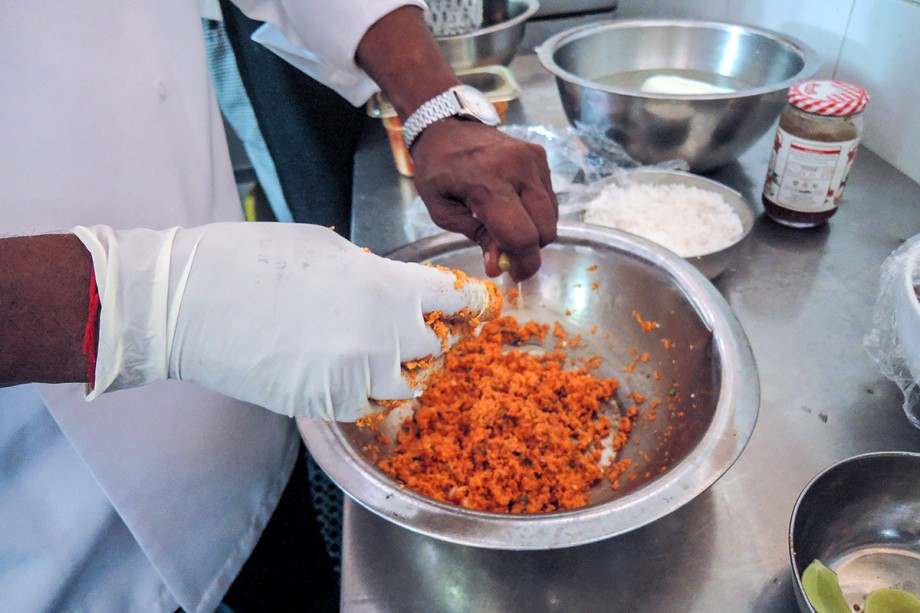 Lime is added to the bowl of coconut, onion, green chilies, chili powder and salt, before Chef Publis grates the manioc, squeezes out the excess juice, and adds it to the mixture. Egg is the last ingredient added.

He began to study more about ancient Sri Lankan dishes and the ingredients and cooking techniques used.

“As I researched, I realized we were doing some of the basics of Sri Lankan cooking all wrong,” he says. “I found that even the basic spice mix we used in our curries had changed with time, and we were mixing spices in a way that we were losing the best flavors in our dishes. This was due to lack of understanding.”

Chef Publis found that coriander, cumin and sweet cumin – three spices which are also commonly used in medicinal preparations, and which form the basis of a curry powder – were being mixed with other spices by many Sri Lankan cooks, losing the rich flavor, he says.

He also tries to promote new cooking methods and eating habits. For example, cooking greens on high heat for only a few seconds in an effort to preserve the nutrition and flavor of the greens, or encouraging the consumption of local vegetables, such as bottle gourd, in raw salads for higher nutrition.

“I have probably visited every village in the country, looking for ingredients, looking for traditional doctors, or simply to meet with elderly women in the village who knew ancient recipes,” he says. He also visited libraries, poring over ola-leaf manuscripts and other ancient texts, and met with researchers studying Sri Lankan agriculture and its history. 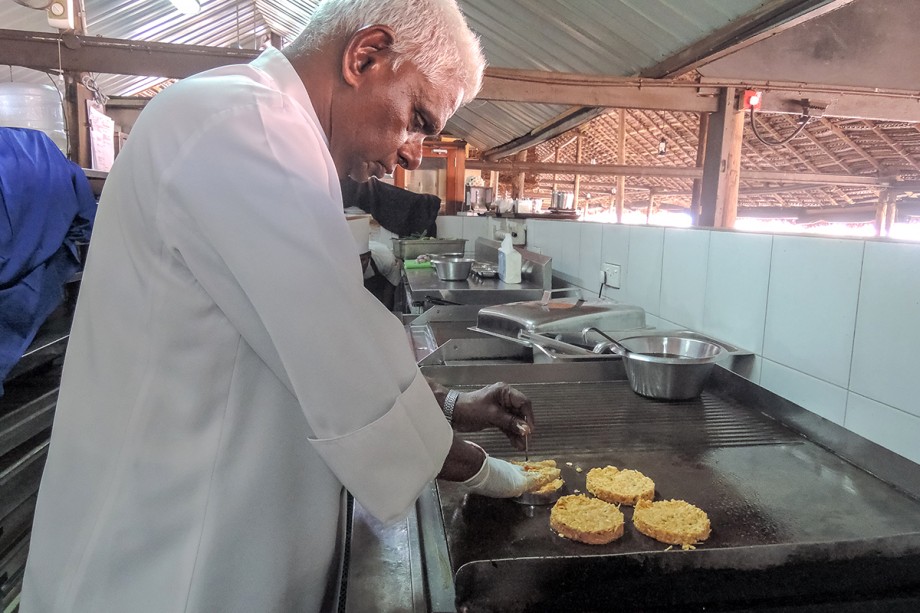 By pressing down on the manioc mixture, Chef Publis creates rounds out of the roti – each about a half-inch in height. He browns each side of a roti on a hot stove, and when they have achieved a golden color, Chef Publis removes them from the pan and prepares them for consumption.

Many of the dishes he learned about had no recipes, so he had to create the dishes anew, using currently available local ingredients.

“In addition to collecting ancient recipes, understanding the local ingredients, the various cooking methods and techniques – I also learned something vitally important,” he says. “The cooks in ancient Sri Lanka were women. They were the mothers, the wives, the grandmothers who would cook for their families. They found the ingredients, they mixed the herbs and spices, they spent hours cooking these dishes. On special occasions, groups of women got together to cook large meals. But in every instance, they cooked with love.”

It’s a philosophy that Chef Publis uses in his cooking.

“The secret ingredient to any recipe, the one ingredient that makes the dish extra flavorsome, is to cook with love,” he says, as he prepares a narration of his manioc roti recipe for Global Press.

“The recipe today is a roti, because it takes me back to my roots of cooking roti with my mother. But I have adapted it, to make it healthy – there is no processed flour in this dish, the starch comes from the fresh manioc, which is a healthy ingredient, with both nutrition and flavor.” 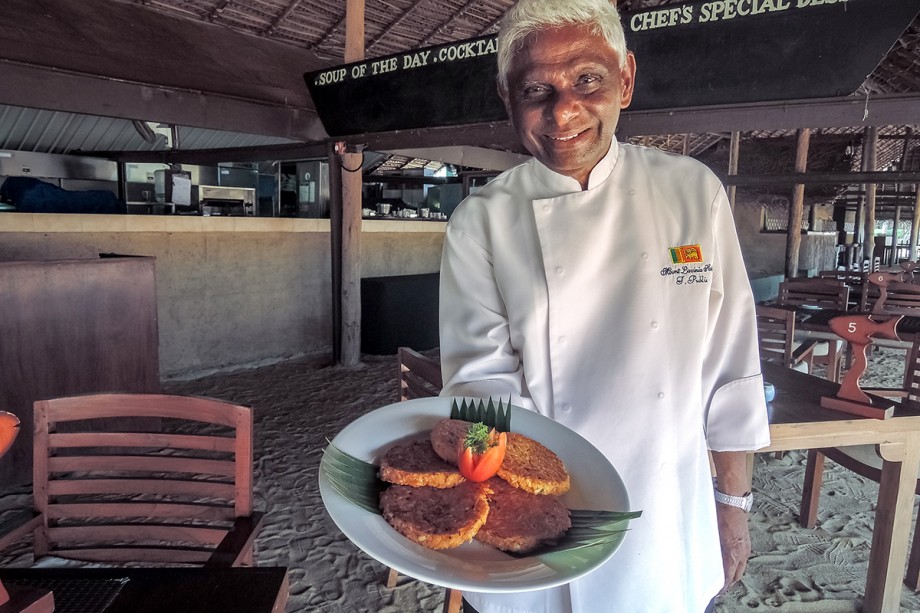 How To Make Chef Publis’ Manioc Roti
1. Peel the manioc and wash well. Place it in a bowl of water until it’s time to use it. By placing the manioc in water, Chef Publis adds, you are preventing the skin from oxidizing and turning brown.

2. Put the grated coconut, chopped onions, chopped green chilies, chili powder and salt into a bowl and mix well so that the coconut absorbs all the flavors. You can use a spoon, but Chef Publis recommends mixing it with your hands.

3. Then pour the lime juice into the coconut mixture and mix again and taste. If desired, add more salt or lime.

4. Grate the manioc into a separate bowl. Then take handfuls of the manioc and tightly squeeze out the juice before adding it to the bowl with the coconut mixture. Repeat, a handful at a time, until all the manioc is added.

5. Add the egg to the manioc and coconut mixture and mix with hands until the egg is well mixed.

6. Place a frying pan on high heat and rub lightly with oil. Then, place a pancake ring on the pan and add the manioc mixture into the ring, pressing down firmly until you fill the ring up to a height of about a half-inch. Do this with the other rings until you have several on the pan.

7. Reduce heat to medium and allow the roti to cook for about 2 minutes until lightly browned. Then flip over and brown the other side for another 2 minutes. If needed, sprinkle a little oil onto the pan before you flip.

8. Cover the pan and allow the rotis to cook in the steam for about 5-7 minutes, flipping over only once or twice. As the manioc cooks, Chef Publis says, it will soften and change color from a pure white into a golden color. This means the roti has cooked and you can remove it from the pan.

9. Repeat until all the manioc mixture is used.

10. Serve warm. The rotis can be eaten on their own or with a salad of greens.