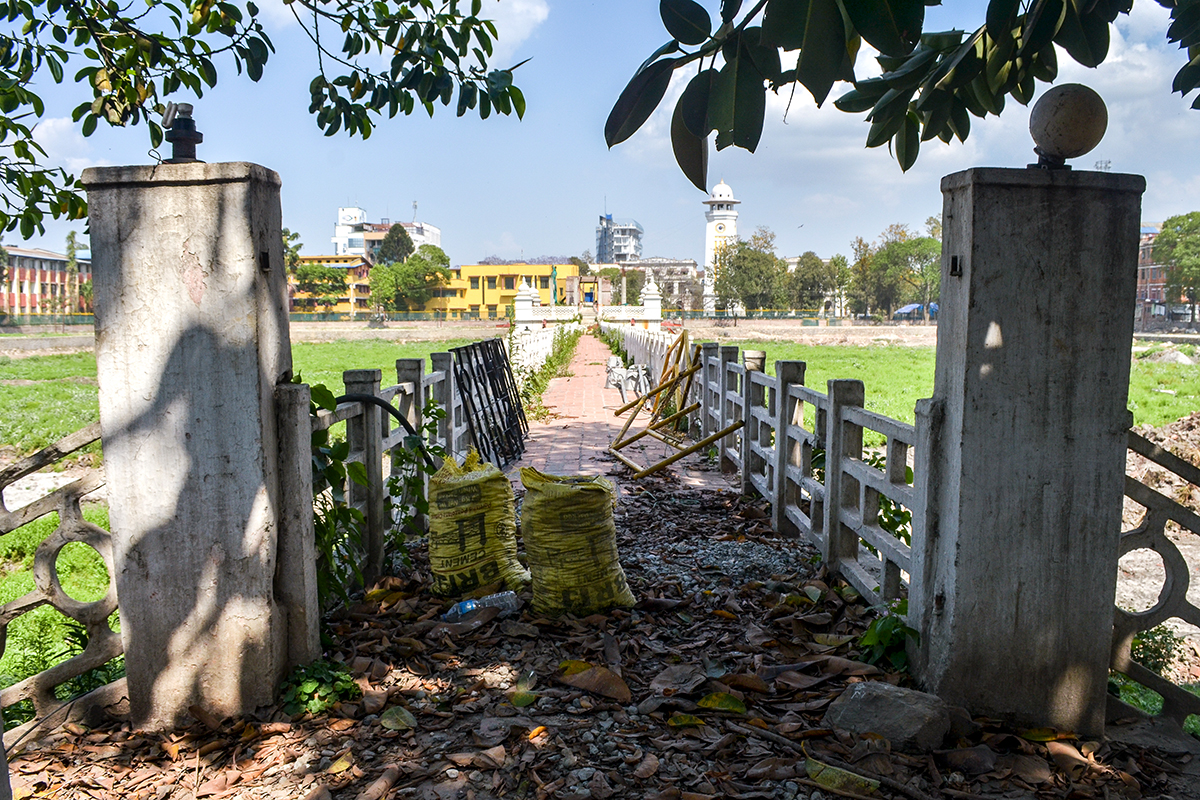 KATHMANDU, NEPAL — The temple at the center of Rani Pokhari, a picturesque landmark in the heart of this capital city, is covered with a tarpaulin. Around the temple is a large, dried bed where there used to be a pond. The site, built in the 17th century but half-destroyed by a major earthquake in 2015, now appears to be in mid-construction.

Hindus here are dismayed that another year has passed without the temple opening for the celebration of Tihar, a major holiday that occurred in October this year.

“The heart aches a lot now to see the condition of this place where we would perform puja,” says Sunita Das, 32, a Kathmandu native, referring to religious rituals often performed on holidays. “If it takes so long to rebuild one pond, what would be the situation of other places?” 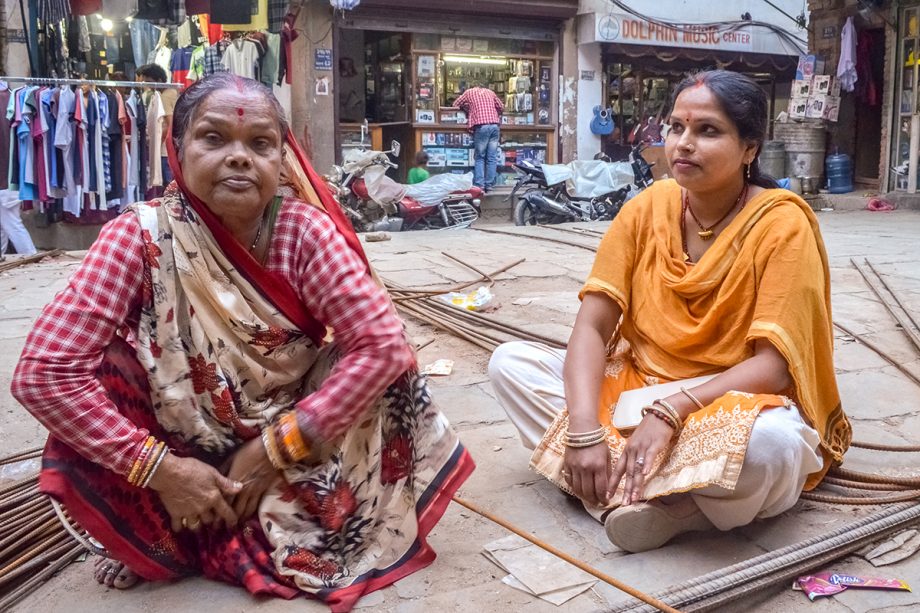 Chandra Kala Devi, 65, in red, sits with Sunita Das, 32, in yellow. The women say they are frustrated by the long wait for Rani Pokhari to reopen.

Rani Pokhari is just a small piece of what was destroyed in the 7.8-magnitude earthquake on April 25, 2015, and in the quakes that continued shaking Nepal for weeks afterward. Nearly 9,000 people died and millions of people lost their homes. Huge numbers of families are still living in temporary shelters, but for Nepalese – who tend to be religious or at least very culturally active – temples, shrines and other such sites are of equal importance to homes.

The city of Kathmandu took the responsibility of rebuilding Rani Pokhari, but the Department of Archaeology intervened in August 2016, claiming that the city was flouting archaeological standards by using cement and rebar instead of traditional materials, including timber and wood. All work stopped.

Community concerns about the rebuilding process even led to a rebuke from UNESCO, the branch of the United Nations tasked with preserving cultural heritage. UNESCO appealed to authorities to have the Department of Archaeology supervise restoration work. The current agreement states that the archaeology department will reconstruct the temple and the city will rebuild the pond.

But nothing was completed in time for the festivals, which for some celebrants are centered at the site. 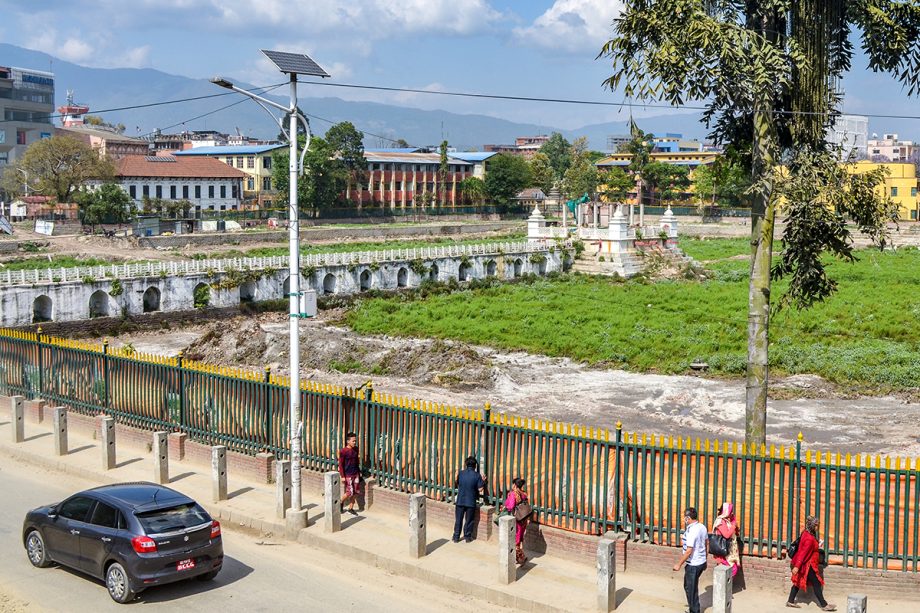 The temple in the center of the Rani Pokhari site was surrounded by a pond until the 2015 earthquake. Now, the site is filled with vegetation.

“The hope that it will be rebuilt soon has now died,” says Suresh Shrestha, 30, who often visited Rani Pokharito during the Tihar festival.

The site was built by King Pratap Malla to console his wife, who was grieving the death of the couple’s son, says Mukunda Raj Aryal, a historian. Since then, the temple has been open to the public only during Tihar. During the festival, people who don’t have siblings have gathered there to receive blessings. 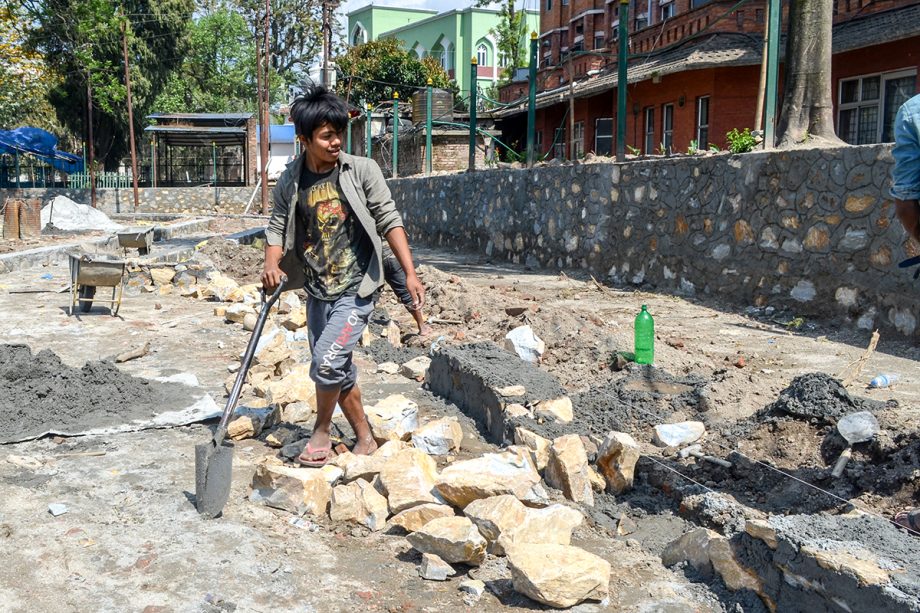 The pond that once surrounded the temple at the Rani Pokhari site was called “Queen’s Pond,” because it was built to comfort a queen who grieved the death of her son. Repairs to the pond were stalled in 2016.

The city had completed about half the work when the archaeology department stepped in and stopped all activity, based on local media reports that reconstruction efforts were haphazard, says Uttar Kumar Regmi, the chief of the Department of Urban Development and Building Construction at Kathmandu Metropolitan City.

But Ram Bahadur Kunwar, spokesman for the Department of Archaeology, says his department stopped the city’s work after it examined the temple and pool site.

A contract was signed with builders in May, and the site’s reconstruction is now expected to be complete within two years, Kunwar says.