Skip to main content
The story you are reading was published on Monday November 27, 2017. To read more recent stories click here. 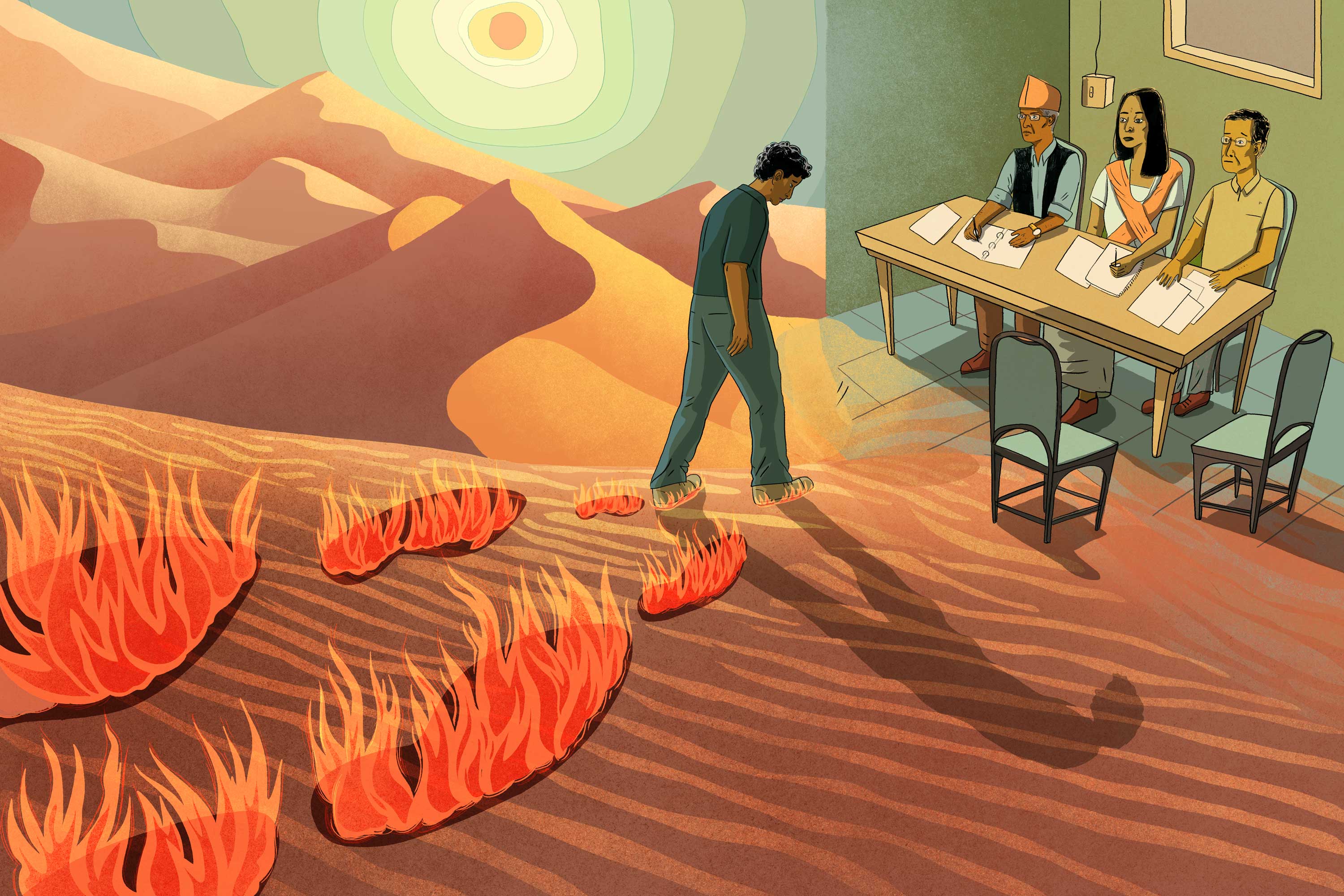 KATHMANDU, NEPAL — Rows of chairs are set up to face one another on the fourth floor of the Department of Foreign Employment, the agency that regulates Nepal’s massive labor migration industry.

This is where mediation happens: Migrant workers, often angry or frustrated, face the employment agencies that sent them abroad.

On this day, the worker is Sohan Panday, a 24-year-old from Nuwakot, a mountainous region just west of the capital Kathmandu. Panday says he paid 110,000 rupees (about $1,050) to a recruiting firm, on top of a 10,000-rupee (about $95) service fee allowed under Nepalese law, to go to Qatar to work as a security guard. Like many migrant workers, Panday was excited about the chance to have a steady job and send money home to his family. He did what he had to do – and paid the fees he was told to pay – to move abroad.

Once in Qatar, Panday says, he was forced to wear cheap plastic boots in the scorching heat. All of his toes blistered severely, he says. He showed the wounds to a nurse at a health clinic for migrant workers, but his employer hadn’t given him a health card, so the clinic didn’t treat him, even though he was in severe pain.

“I was freaking out,” Panday says.

After months of hoping for medical care, Panday left Qatar and returned home, poorer than when he left.

Now, he’s trying to get back the money he says he spent to get to Qatar, including the 110,000 rupees he says he was charged illegally.

I was freaking out. Sohan Panday, a migrant worker whose feet were injured when he worked in Qatar

The Department of Foreign Employment created a mediation committee in January to resolve disputes between workers and recruiting firms or agents. By September, the most recent period for which information was available, the committee had received 211 complaints, officials say. Of those, 150 were settled in the mediation process. The remaining 61 cases went on to the department’s formal complaint section and decided in favor of the workers.

In 2015, the Nepalese government barred recruiting and employment agencies from requiring migrant workers to pay for their own visas and airfare. The agencies, often called manpower agencies in Nepal, are allowed to charge 10,000 rupees (about $95) as a service fee, as well as nominal fees for pre-departure training and other services, but it is a criminal offense to force workers to pay any additional charges.

The change was intended to end exploitative practices that often kept migrant workers in indentured servitude, working without pay until their airfares and other fees were settled with their employers or recruiting agencies.

Despite the legal changes, workers’ advocates say, illegal fees are rampant, and the industry remains completely unregulated in practice, so the exploitation continues.

“Workers are compelled to pay the charges as much as they are asked, due to a fear that they would not be allowed to go abroad,” says Mohan Adhikari, a spokesman for the Department of Foreign Employment.

During the Nepalese month of Shrawn (from July 16 to August 16), 732 recruiting firms sent workers abroad, says Narayan Prasad Acharya, a director at the Department of Foreign Employment. Of those, 36 were found to be processing and recruiting workers without government permission. Another 66 firms were reprimanded for failing to comply with the department’s registration policies.

It’s difficult for migrant workers to prove that they were charged more than 10,000 rupees, Adhikari says, but adds that his department has carried out raids on recruiting firms since August and found evidence that those firms forced workers to pay 140,000 rupees (about $1,330) each.

The proprietors of those firms were arrested but released on bail, Adhikari says.

For men such as Panday, who are lured in by exploitative manpower agencies, the mediation system offers not only a way to get back illegal fees, but also a chance to meet face-to-face with the people who, in some cases, put the workers’ lives in danger. Even when a mediation session becomes a literal case of one man’s word against another’s, the workers say they find a measure of solace in telling their stories out loud.

Jagat Gurung, the owner of Pacific Overseas Consult, the manpower agency that sent Panday abroad, sat in silence as Panday told his story. Panday’s mother Sita had her own complaints. She went to Gurung’s office to demand that the agency pay her son’s medical fees, but the person she met there verbally abused her and threatened to beat her, she says.

When it came time for Gurung to respond, he insisted that Sohan Panday paid just the 10,000-rupee (about $95) service fee. If Panday could show any evidence that someone at the manpower agency forced him to pay more than that, Gurung says, he’d happily offer reimbursement.

But as it stands, Gurung says, his agency lost money because of Panday.

“There was a contract with the company in Qatar for the worker to work for two years. But I had to pay 1,800 riyals (about $494) as compensation when he returned suddenly,” Gurung says.

Gurung then made Panday an offer. He’d give him money, Gurung says: 10,000 rupees, the amount of the service fee.

Panday refused the offer. He hopes to plead his case in court.