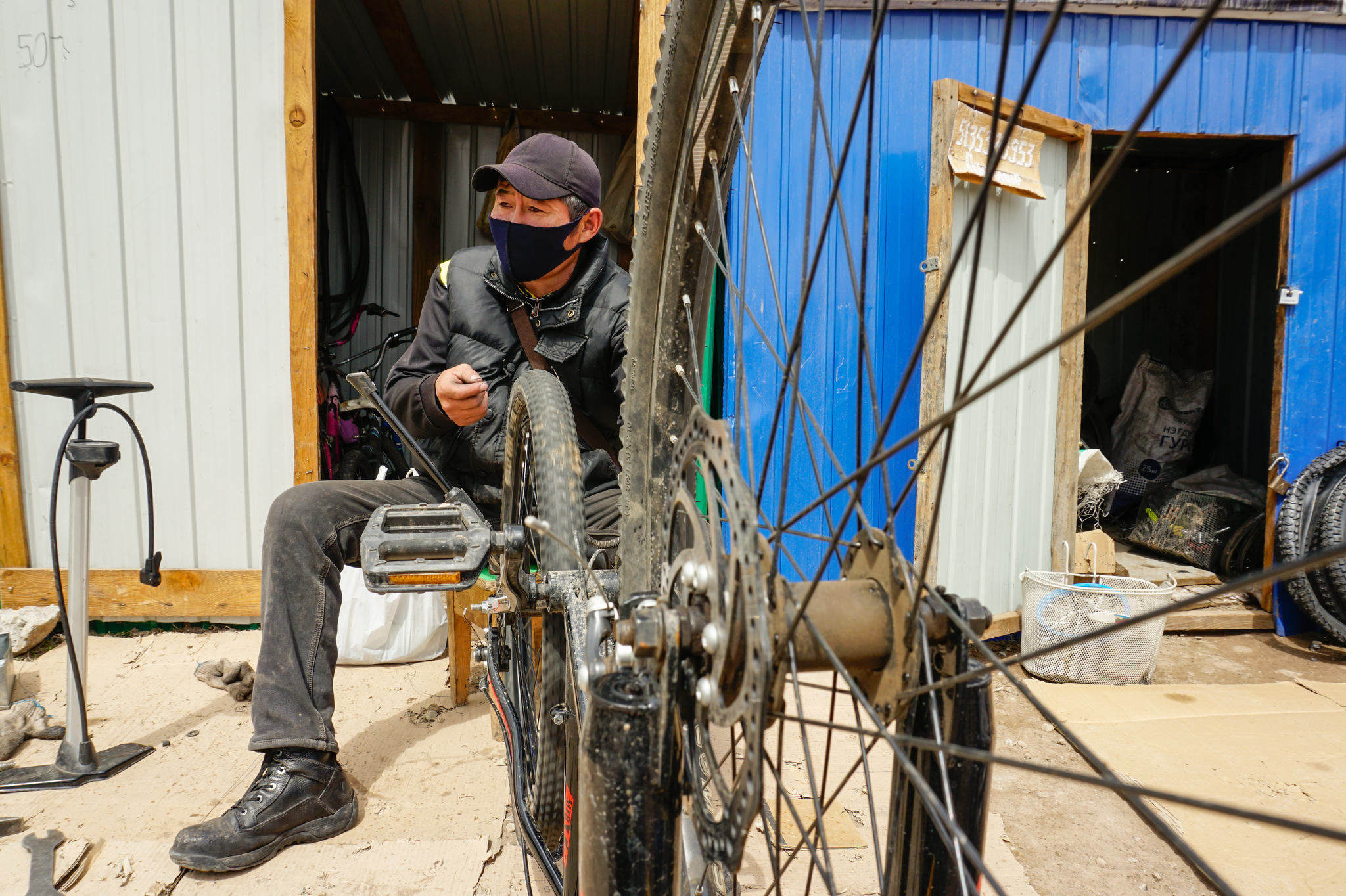 The 46-year-old opened his repair shop a year ago, and demand has kept him busy. About 10 repaired bicycles stand outside the shop, ready for customers to collect.

Cycling has traditionally not been a popular form of transportation in Mongolia. Poor road conditions – particularly wet, slippery and snow-covered roads in winter – can make cycling treacherous. Dedicated bicycle lanes are few and far between, leaving cyclists vulnerable to aggressive drivers. And the lack of secure parking has made bicycle theft a common concern.

Despite these challenges, bicycle ridership has increased dramatically during the pandemic – a trend echoed in many parts of the world. When the Mongolian government suspended public transportation and banned cars, buses and other motor vehicles from the roads during lockdowns, cycling became a convenient way for many Mongolians to shop for groceries and commute to work. The Ministry of Health also encouraged Mongolians to take up cycling as a way to exercise and improve their health.

That’s been good for Erdenebolor. His income has soared since he launched his repair business, and he’s hired three assistants to keep up with demand.

“Soon I am going to hold a workshop on bicycle repair,” he says. “It will be great to train as many people as possible during these tough times and to help them to have jobs and sustain their livelihoods.” 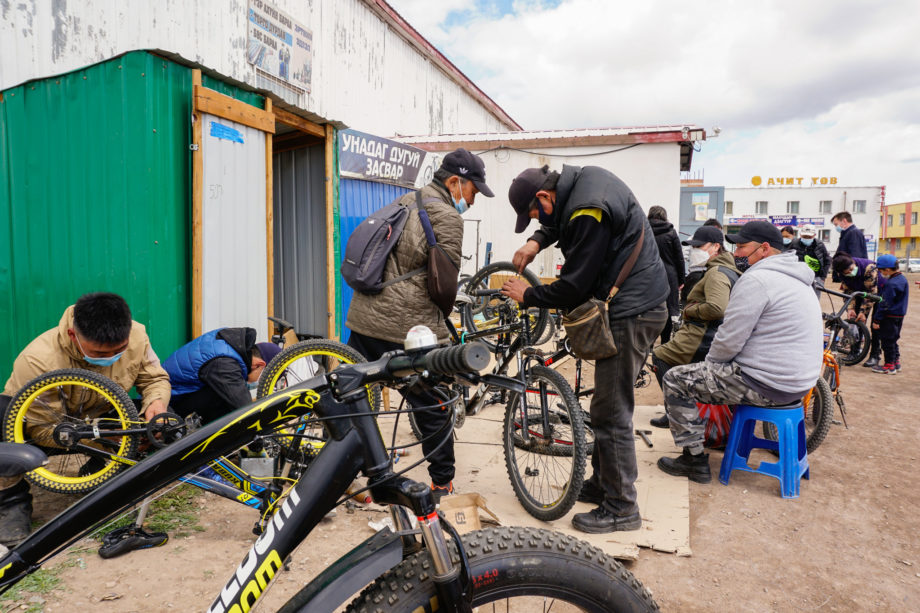 Erdenebolor Dorjsuren fixes tires while customers wait. As cycling has grown in popularity during the pandemic, Erdenebolor’s business has boomed.

The Orkhon Province Department of Physical Culture and Sports doesn’t keep statistics on the number of cyclists in Mongolia. But Munkhchuluun Otgonbold, a police officer and traffic police coordinator at the Orkhon Province Police Department, has noted more people riding bicycles in recent months.

“There was hardly anybody who traveled with a bicycle before,” he says.

Other countries experienced similar surges. From 2019 to 2020, the level of cycling increased an average of 8% in 11 European countries (and 23% on weekends), according to Eco-Counter, a French company that tracks global bicycle use. In the United States, it increased 16% overall, with a 29% jump on weekends. Bicycle sales soared, and hundreds of cities built or expanded bike lanes and paths. Many cities also installed more bike parking or subsidized the cost of bike sharing and repairs.

Mongolia is working on similar reforms. In response to cycling’s increasing popularity, the government plans to build bicycle lanes and secure parking areas across the country, according to Khan-Uul Dorjgotov, a senior urban planning specialist at the Department of Urban Development.

In the capital, Ulaanbaatar, the government plans to build more than 160 kilometers (100 miles) of bicycle lanes in the city center over the next five years, as well as 70 bicycle parking lots outfitted with security cameras. Residents will also be able to register their bicycles with the traffic police. 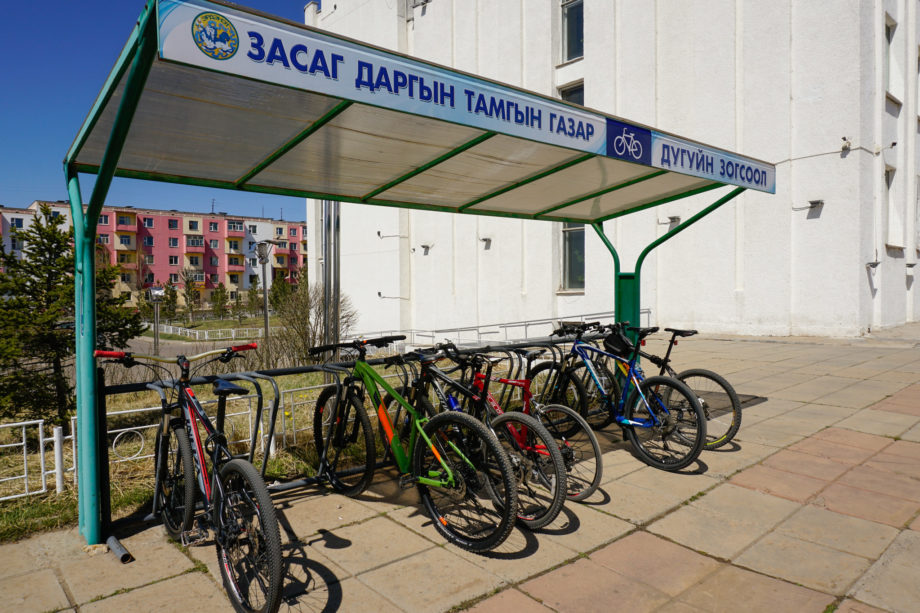 The Governor’s Administration Office of Orkhon Province installed secure bicycle parking at the request of employees.

Even as those plans are in development, banks, shopping centers, schools and some government agencies have implemented their own initiatives to encourage and support cycling. The Governor’s Administration Office of Orkhon Province, for example, built a bicycle parking area at the request of employees who cycle to work. That, in turn, has encouraged even more employees to take up cycling.

“It is important to provide people with opportunities and conditions to ride bicycles,” says Odgerel Demberelsuren, a specialist in charge of physical training and recreation at the Orkhon Province Department of Physical Culture and Sports.

The department is discussing the possibility of building dedicated bicycle lanes in the province, and Odgerel says she hopes the lanes will be constructed in the next year or two.

That’s welcome news to riders like Batkhuyag Bilegsaikhan, head of the local Association of Cyclists.

“If we have special bicycle lanes,” he says, “everyone will be able to ride bicycles without fear.”