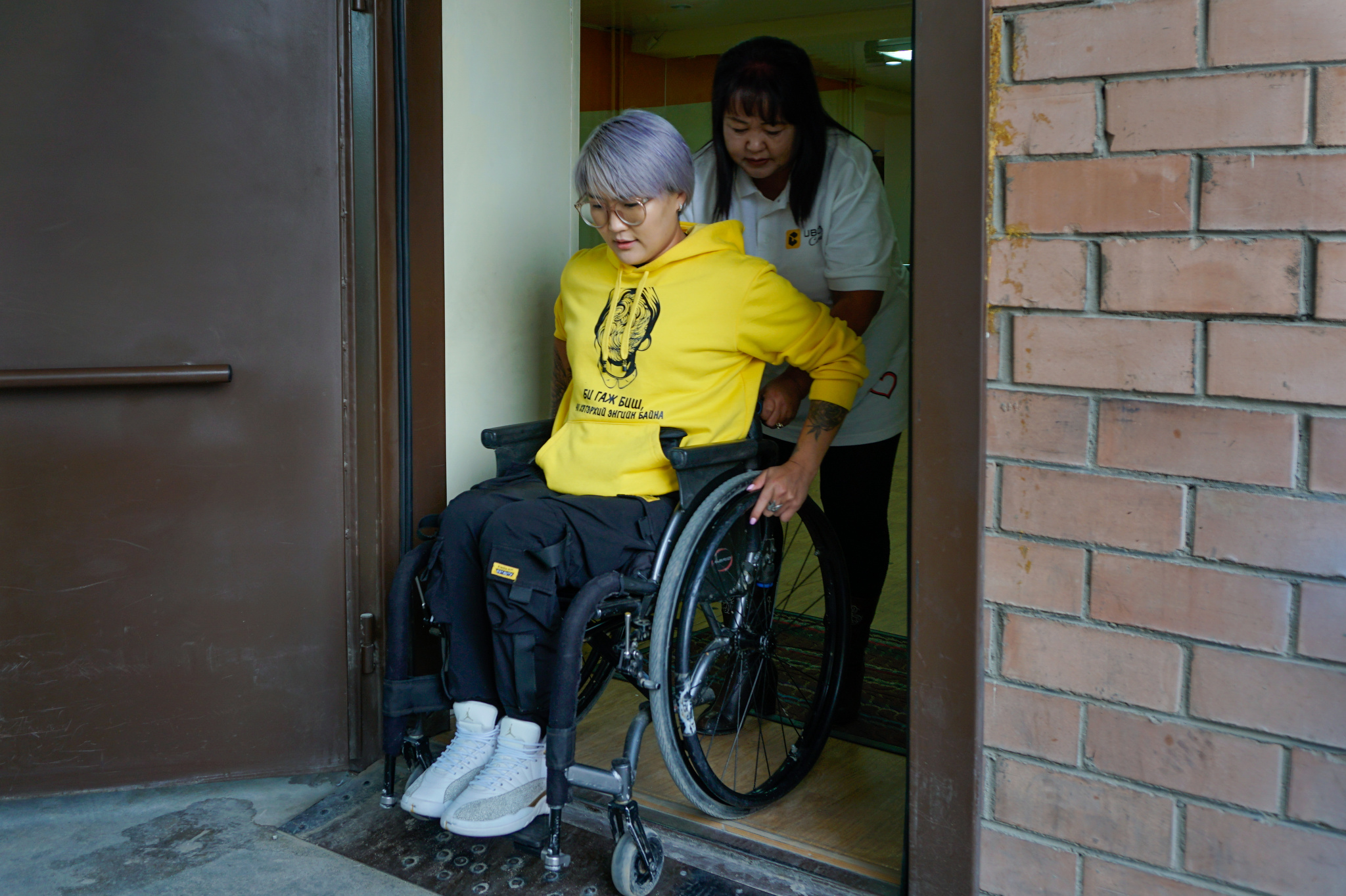 ULAANBAATAR, MONGOLIA — Lkhamjav Tsagaan’s cane is an extension of himself — having grappled with reduced mobility since childhood, he has learned to treat it so. One of the most difficult days in Lkhamjav’s life was when, while alighting from a public bus, his cane snapped. “Walking home that day with a broken cane from the bus stop was the hardest and longest road I have ever walked in my life,” he says. “I have never gotten on the bus since then.”

There are 94,800 people of working age with disabilities in Mongolia, according to a 2017 survey conducted by the National Statistics Office of Mongolia. Just over a quarter — 27.8% — were employed at the time. Many find it difficult to work outside their homes because they say Mongolia’s infrastructure — in particular, public transport and buildings — does not typically cater to people with physical disabilities or allow them to go about their lives with dignity. In a 2018 survey, nearly one-third cited hostile infrastructure as a deterrent to employment.

In the capital, Ulaanbaatar, home to more than half the country’s population, less than 5% of public transport vehicles are equipped to accommodate people with disabilities, and according to accessibility evaluations conducted in 2014 and 2015 by the Wheelchair Users’ Association of Mongolia, the National Human Rights Council and the World Health Organization, fewer than one-third of facilities at public service organizations were satisfactorily accessible.

Odonchimeg Sengeebaatar’s life has been shaped by such constraints. “Like other people, I want to be able to decide where to eat and at which theater to see movies,” she says. “Unfortunately, the first thing that comes to mind is whether the building has a wheelchair ramp, rather than which food to eat and which movies to watch. Being disabled in Mongolia means that you have no freedom of choice.”

Mongolia’s labor laws mandate that companies with 25 or more employees ensure that they employ one or more persons with disabilities, a 4% quota. Failure to do so can result in a fine of a monthly payment equal to the minimum wage of each person that the company fails to employ. (The money goes to a state fund that supports Mongolians with disabilities.) Many employers prefer to pay the fine rather than ensure that their workplace — and the commute to and fro — is accessible for everyone, in part because it is cheaper to do so. Moreover, enforcement of the law is patchy at best. Of the 7,200 companies in Mongolia that employ more than 25 people, more than half — 4,100 — fail to employ people with disabilities and, of these, just over 300 pay the fine. 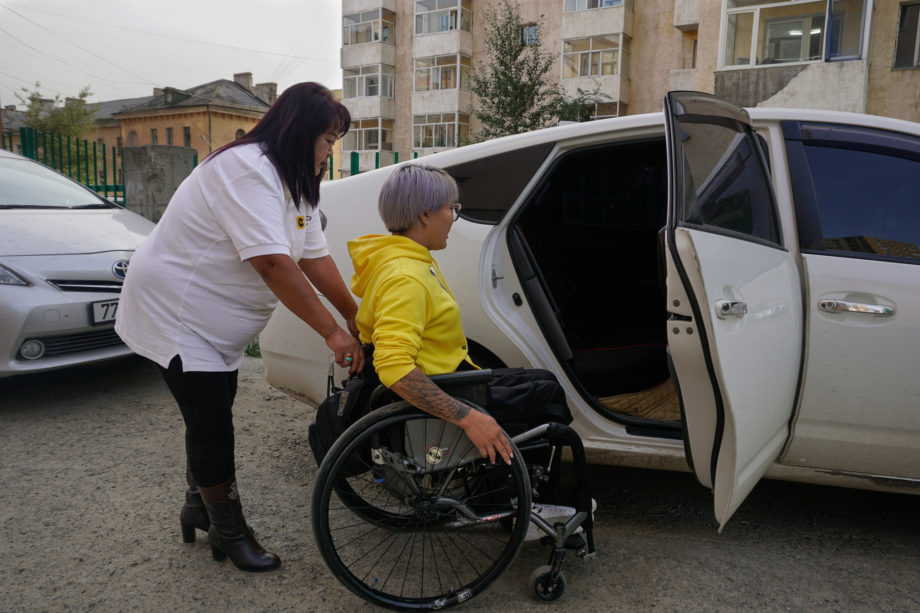 Odonchimeg Sengeebaatar gets into a car after work, assisted by Tuya Jigjidjav, who drives for taxi service UBCab, which has trained 100 of its drivers to facilitate customers with disabilities.

“Making state public transport more accessible is a priority task,” says Chuluun-Erdene Mijigsenge, a specialist at the General Authority for the Development of People with Disabilities. Getting to and from work is a major obstacle for many, given that the overwhelming majority of buses lack facilities such as ramps. While Mongolia’s laws mandate inclusion on paper — including a 1999 law enjoining that at least 10% of public transport vehicles accommodate people with disabilities — many say there is scant effort on the government’s part to make public amenities more inclusive. (The Ministry of Labor and Social Protection declined to comment.)

In this context, private companies have stepped in to fill a market gap.

In an office in Ulaanbaatar, as the clock strikes 6, a woman greets Odonchimeg, rolls her wheelchair out the door, then helps her settle into a car. Tuya Jigjidjav drives for taxi service UBCab. She is among 100 drivers the company has trained to facilitate customers with disabilities. Prior to this service, Odonchimeg, who works as a project coordinator, would commute by bus or rely on others to drive her to and from work. “To be honest, public transport is difficult enough for an ordinary person, let alone a person with disabilities,” Tuya says. “In this situation, I am proud to take at least one person with disabilities safely to his or her destination while doing my job.”

For years, Undrakhbayar Chuluun, head of Universal Progress, an independent living center for people with disabilities, has been lobbying the government on the issue. “We did not ask for special roads from this country; we just want the buses to at least be accessible,” he says. “The most important issue for disabled people’s participation in social life is a proper social security system and an accessible infrastructure environment.”

Even as he continues to keep the government accountable in its promise to make public transport more inclusive, Undrakhbayar regularly avails the services of UBCab. Universal Progress has 17 employees, 12 of whom, including Undrakhbayar, live with disabilities. “I have now stopped worrying about how our staff went back home at night after work,” he says.