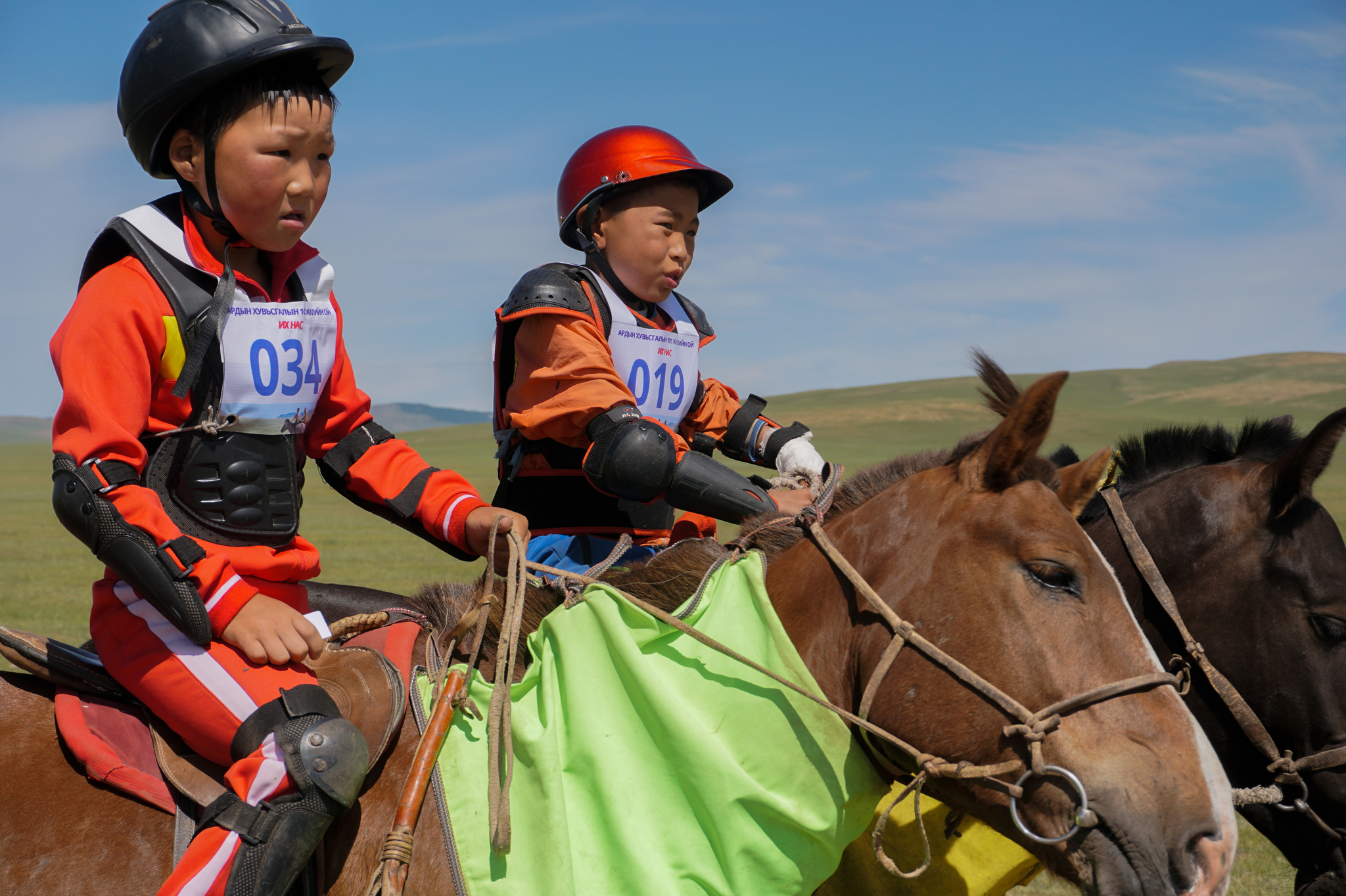 URGUUTIIN TAL, ARKHANGAI PROVINCE, MONGOLIA — Soyombo Myagmarsuren, 13, began racing when he turned 6, following in the footsteps of generations of horse trainers. “I love horses,” he says, beaming with pride. “It is cool to gallop on a horse mane until the wind whistles.”

These days, Soyombo walks with a limp. Last winter, he fell from a horse while training for a race.

So he did not race competitively in this year’s Naadam, a summer celebration of Mongolian sovereignty believed to have existed since the second century B.C. and held regularly since 1639. The internationally recognized celebration is referred to locally as the “Three Games of Men,” given its showcase of wrestling, archery and horse racing. These sports symbolize strength, wisdom and courage, respectively. (Despite the name, women and girls now also compete in the latter two.)

In the races, horses run courses of 12 to 26 kilometers (7 to 16 miles) across the steppe, depending on the animal’s age. And on their backs it is young boys and girls like Soyombo, typically between the ages of 6 and 13, whose courage is on display.

Child jockeys — preferred because they do not weigh down horses — are integral to Mongolian horse racing. Mongolian law now stipulates that jockeys competing at Naadam should be no younger than 8 — despite the legal working age being 16 — and forbids racing and long-distance training during winter. But rights activists say these regulations are frequently flouted. Family members of jockeys told Global Press Journal that children as young as 6 still race. Meanwhile, the United Nations has called upon the Mongolian government to ban recruitment of minors as child jockeys altogether, describing it as “one of the worst forms of child labor.”

As of 2020, 13,100 children were officially registered as jockeys with the Agency of Family, Child and Youth Development, a government implementing agency. Between 1990 and 2019, 40 children died while racing horses. Since early 2021, according to the agency, six children have been killed and nearly 300 injured after falling off a horse during races. Orkhontuul Dashbumba, a child protection specialist with the agency in Arkhangai, says that while horses typically compete in just one race in a single day, child jockeys take part in as many as four, rendering them more susceptible to losing their grip on an animal.

Soyombo, for instance, recalls participating in four different races — for a cumulative distance of 100 kilometers (62 miles) — in a single day.

“I felt sleepy after the third race,” he says. 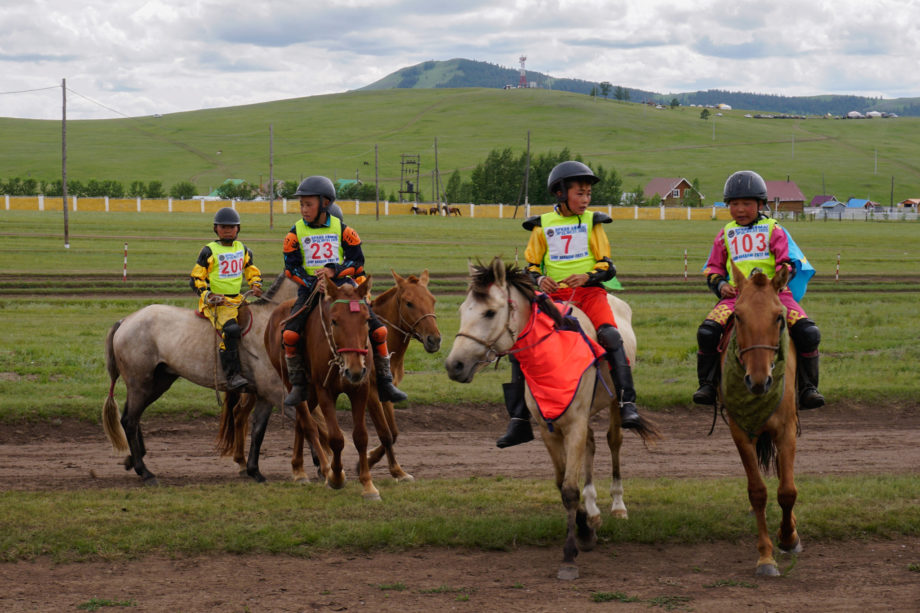 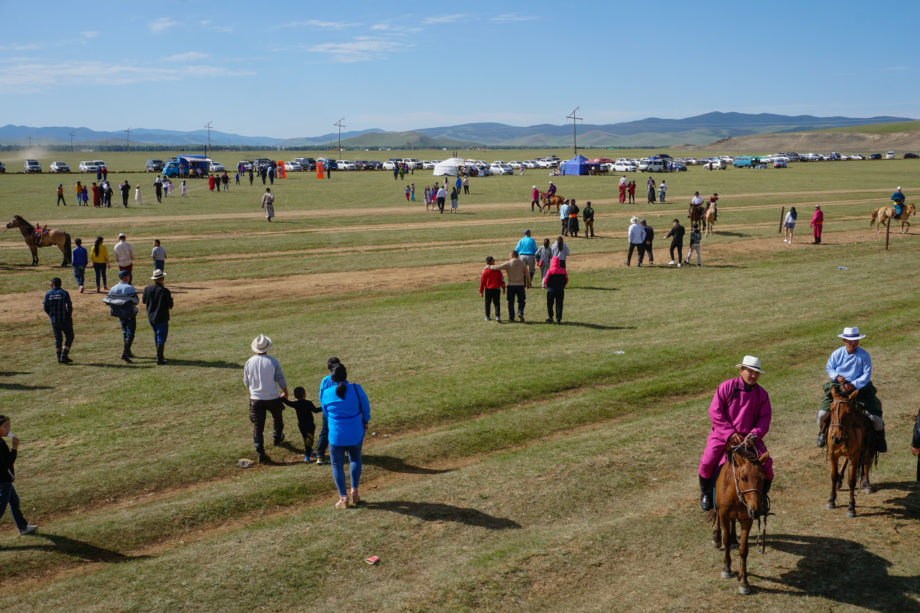 Included in 2010 in the United Nations list of Intangible Cultural Heritage of Humanity, Naadam is referred to locally as the “Three Games of Men,” given its showcase of wrestling, archery and horse racing.

The number of races also appears to have increased. Since the early 2000s, more and more races are organized after the Lunar New Year in February. Winter and spring horse racing, which take place in subzero temperatures, are considered even riskier, and in 2019, following legal action by seven civil society groups, the Mongolian government formally banned horse racing and related training between November and May.

Eight-year-old Orgilbayar Tserenchimed, however, says he rides horses all year. He has some regrets. “Since I ride a horse in winter and summer, I do not have time to study. So I missed a lot of lessons at school,” he says. A resident of Khutag-Undur soum of Bulgan province, Orgilbayar has been riding horses since he was 5.

This, advocates say, is another violation of children’s rights: Many never finish school. “Although children themselves enjoy racing, they should not be left behind in terms of education,” says M. Otgongerel, another government child protection specialist, adding that between 10% and 20% of paid child jockeys enter the profession because their families are poor.

There appears to be no fixed salary for child jockeys, many of whom are recruited among family, friends and neighbors — compensation is left to the whim of the trainer. Many of the riders at Naadam say they were paid between 40,000 Mongolian togrogs and 100,000 togrogs ($12 to $30) to ride a horse at the festival. Twelve-year-old Ankhbayar Mashbat, who has been paid to ride a horse for the past seven years and has finished races in the top five more than once, is paid an annual wage of 1 million togrogs ($300). He says he works with his horses from 6 in the morning until 8 at night while training, and spends at least four hours a day on horseback.

In a 2016 study on spring horse racing spearheaded by the National Human Rights Commission of Mongolia, a government watchdog, just over 9% of child jockeys said that they raced for money. (The study also noted that the children themselves often received petty rewards, such as stationery, candy or fried dumplings, while awards and salaries were given directly to parents.)

Khongorzul Batkhishig, a herder from Khutag-Undur, whose two sons, aged 9 and 10, compete in races, says he can’t stop them. “Sometimes my children are very weak and tired and catch a cold while riding a horse,” he says. “In that moment, I think I will never let my children ride a horse again. But when a local horse groomer makes a request, I can’t say no. The children themselves like it.” 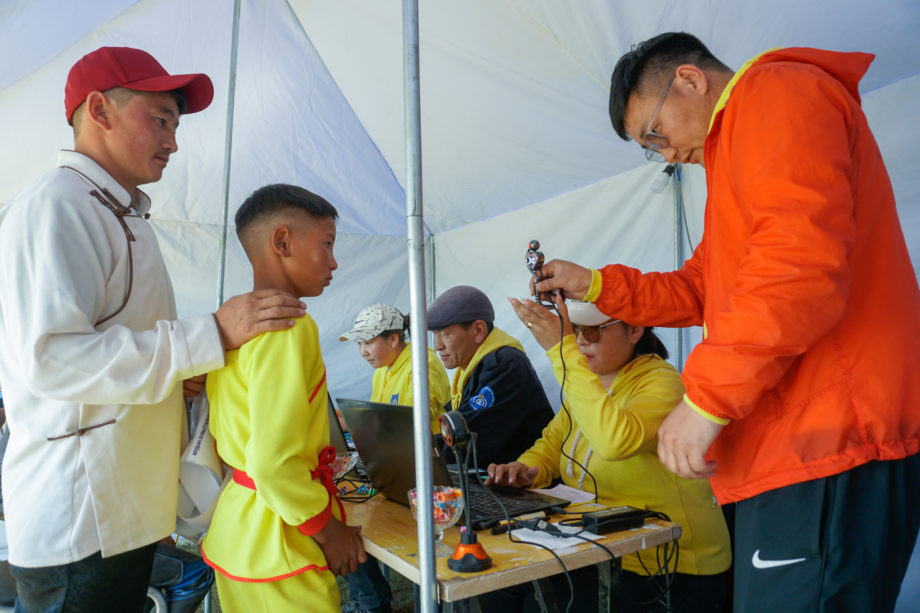 Each race is laced with fear, says Nyamzagd Gendensuren, who has been training horses for 15 years. “It is just enough if both child and horse make it to the finish line well and alive,” he says. “That is the proudest moment.” Horse riding is an ancient Mongolian tradition, in his view, and despite the dangers, he does not want this tradition to be lost, just tweaked slightly. “The trainer needs to teach the child how to pull the horse’s mouth well when entering ditches,” he says. “Also, festivals should be orderly. In the past, many people followed the racing horses in cars and on motorbikes, which raised dust and endangered the riders.”

Uuganbaatar Galbadrakh, head of the complaints and inspection department at the National Human Rights Commission, says climate change has also increased risks. The land is drier and tracks are studded with potholes. “The way Mongolians conduct competitions and the climatic conditions that favored races have changed,” he says. Nevertheless, “completely opposing the tradition means attacking the culture.”

There does appear to be a growing consensus among the public and the government that the state must do more to protect child jockeys throughout the year, says Erdene-Ochir Ulzii, a lawyer with Lantuun Dohio, an independent child rights organization. 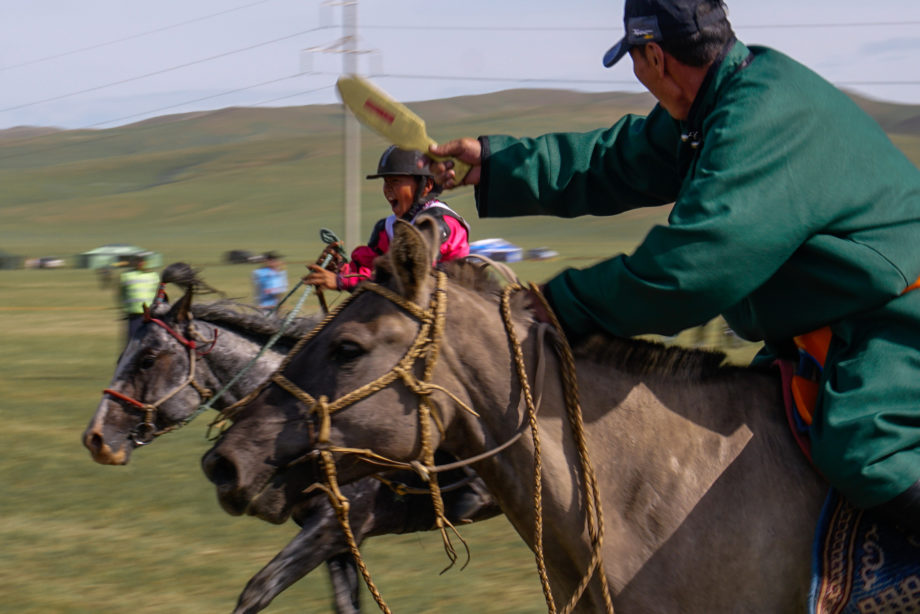 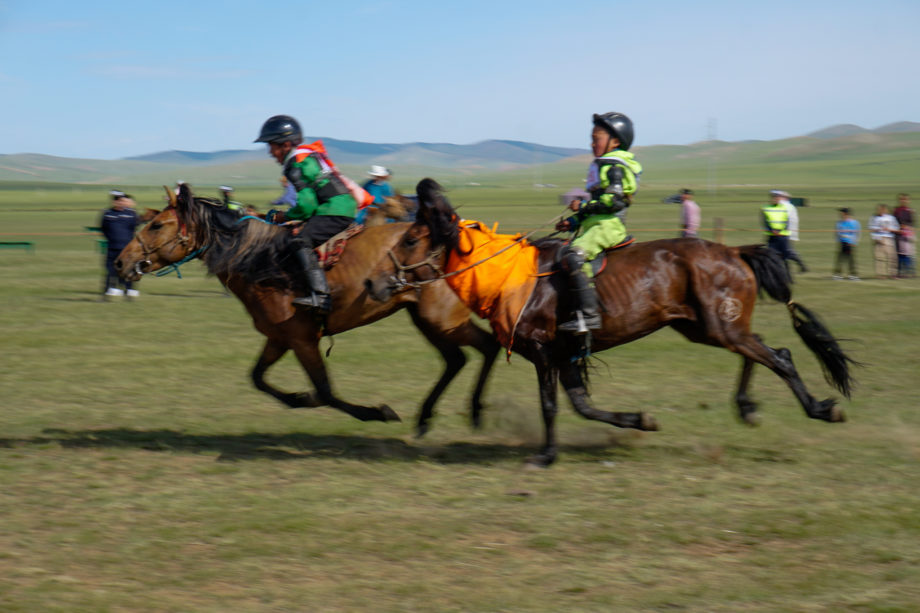 Although Mongolian law now stipulates that jockeys competing at Naadam should be no younger than 8 and forbids racing and long-distance training during winter, rights activists say these regulations are frequently flouted.

In recent years, the government has taken more steps to deter riskier forms of child jockeying. This year, it increased the eligible age of child jockeys from 7 to 8. It has also ordered provincial and soum-level Naadam events to be organized simultaneously, which child rights advocates say will limit the total number of races and, subsequently, overall risk. In 2018, the government also introduced biometric registration of child jockeys to screen for age and other requirements, including mandatory insurance and protective clothing, Otgongerel says. If the Agency of Family, Child and Youth Development finds these stipulations violated, the horse owner is held liable; 17 were charged during the 2020-21 racing year.

There is no data, however, on how effective these measures have been. “It is doubtful whether the protective clothing fully meets the required standard,” Uuganbaatar says. Moreover, winter and spring races, which continue to be organized secretly in defiance of the 2019 state ban, ignore these safeguards altogether. “There are regular cases of jockeys racing when the winter season is not over and the ground has not thawed,” he says. “It was quiet during COVID, but in 2022, there was a small-scale betting event during the banned period.” Earlier this year, the commission appealed to provincial governors to better monitor racing events during the prohibited months.

More crucially, however, these piecemeal measures ignore a glaring point: The legal working age in Mongolia is 16. But when it comes to the time-honored tradition of horse racing, advocates find it difficult to demand a wholesale ban on child jockeys. “There is no way that we can,” Otgongerel says, “because the law states that children over 8 can ride horses.” But under Mongolian law, minors are also prohibited from doing hard labor — and it is difficult, activists say, to describe the grueling work of racing and training as anything but. 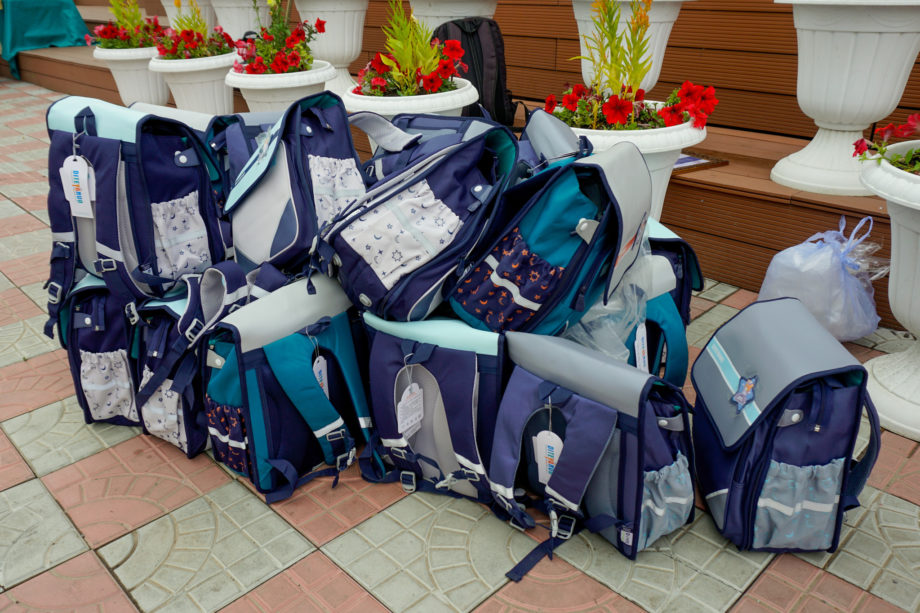 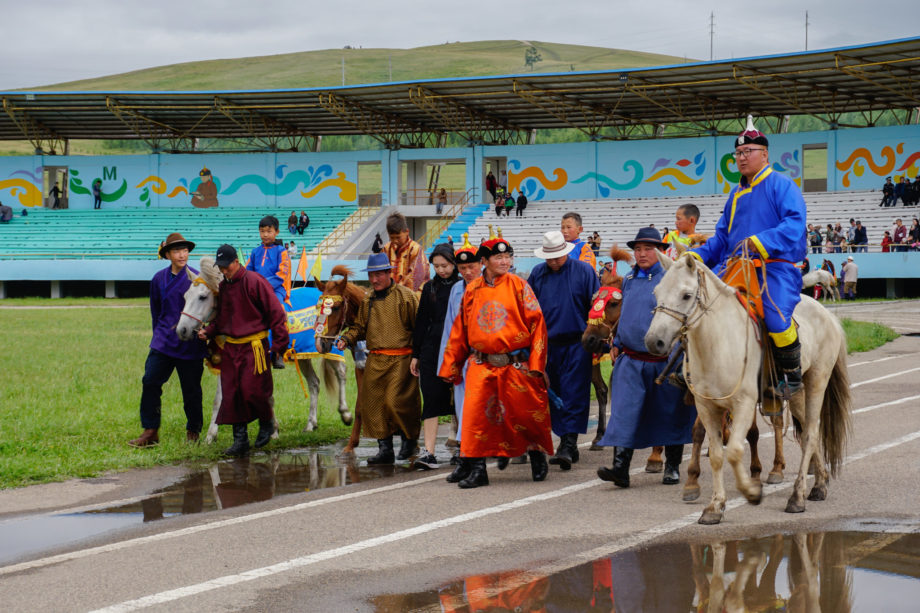 Child jockeys who win horse-racing events often receive petty rewards, such as stationery, candy or school bags, while awards and salaries are given directly to parents.