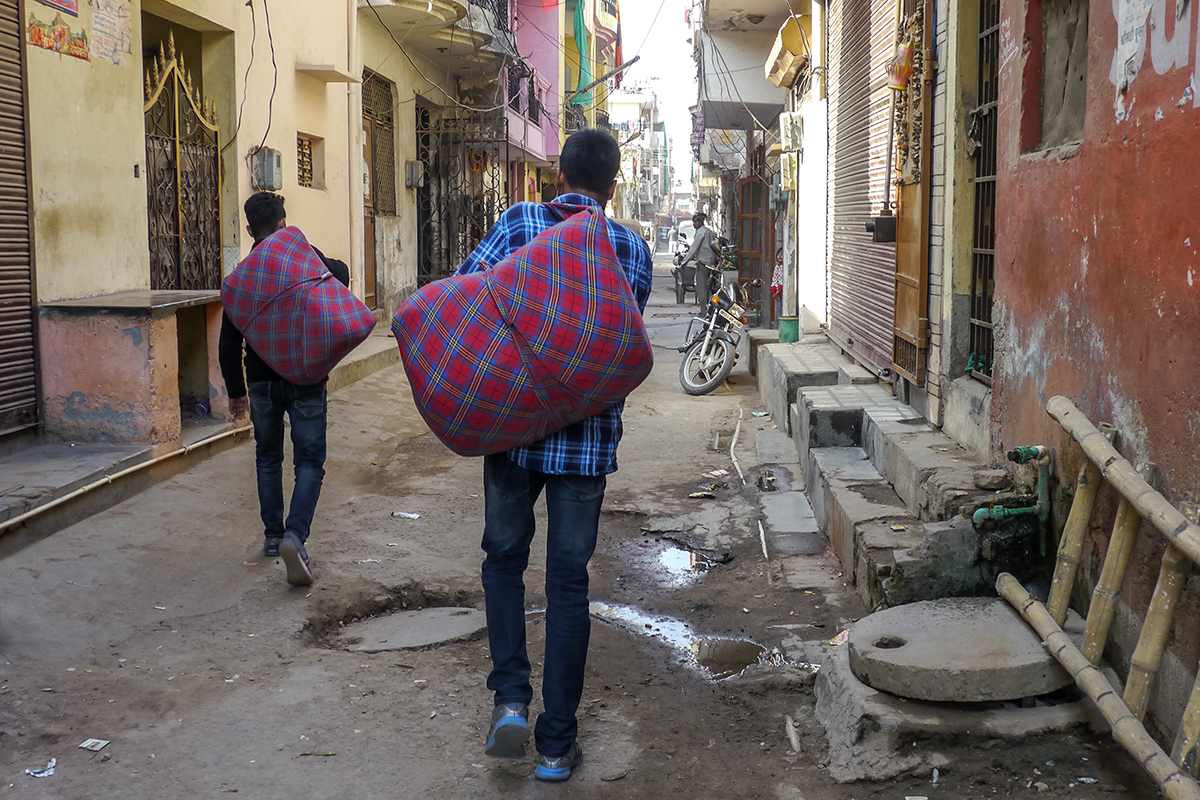 NEW DELHI, INDIA — With a load of embroidered Kashmiri shawls and dresses stacked together and knotted in a sheet hoisted over his shoulder, Parvaiz Ahmed Padder makes his way to a bus stop in this capital city. He’s on his way to Faridabad, a city just south of New Delhi.

Padder, 21, hopes he’ll make a sale. His dresses and shawls are in styles common in Indian-administered Kashmir, where his family lives in Anantnag district.

But even more than making a sale, what matters to Padder is the aching reality that he’s far from home.

“We’re in a situation that is beyond our control,” he says.

Anantnag district, once relatively quiet, is now a hotbed of violence in a conflict that often pits young men about Padder’s age against India’s military forces. The decades-old dispute is over a section of the area that was known simply as Kashmir in centuries past. Now, India controls the area, which includes the Kashmir Valley, as part of the country’s Jammu and Kashmir state. Some factions in the region fight to join Pakistan, while others push for full independence. 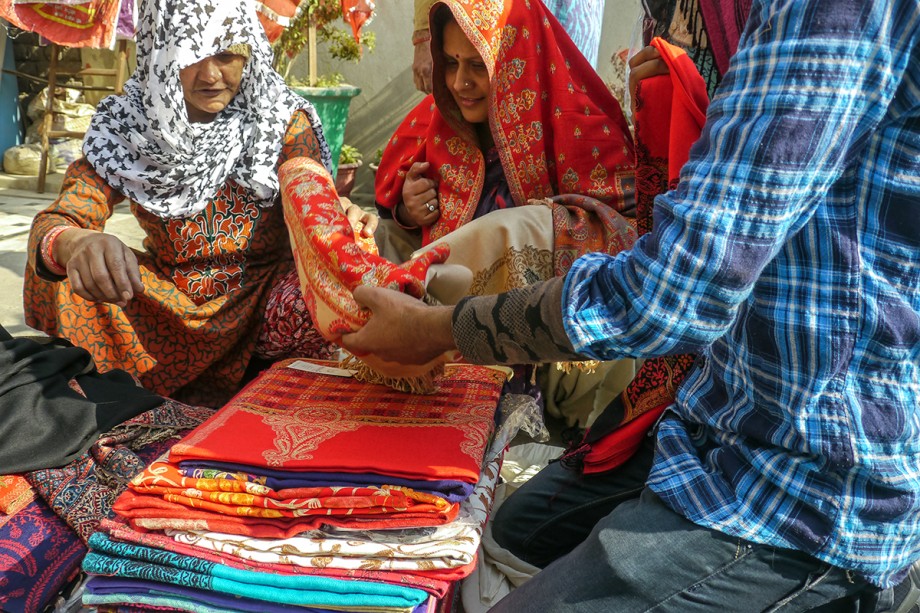 Many of the young men who leave Indian-administered Kashmir for the New Delhi area sell Kashmiri-style textiles manufactured by people they know in their hometowns.

In Srinagar, a major city in Indian-administered Kashmir, and elsewhere throughout the area, opposition to Indian rule often explodes into violence. Crowds of people, usually dominated by young men, have directly confronted Indian forces to protest various injustices by throwing rocks, while the military often responds with live ammunition as well as chili powder, pepper gas and other weapons.

In 2018, 191 cases of excessive force by Indian security forces were recorded, according to the Association of Parents of Disappeared Persons and the Jammu Kashmir Coalition of Civil Society. Pellet shotguns are commonly used to quell protests and caused at least 17 deaths in 2016 and 2017, and blinded more than 1,200 people since the summer of 2016.

In the Kashmir Valley, the pressure to join anti-India groups is immense for young men like Padder. And like many, his family was frantic to ensure that he wouldn’t wind up battling Indian armed forces in the streets.

Instead, he wound up in New Delhi, where he lives with a group of other young men from Indian-administered Kashmir. All of them have come here to avoid being pulled into the violence. They sell textiles and crafts from their home region to make ends meet.

It’s a fraught existence for Padder, who longs to be with his family.

“I often ask myself, ‘What wrong did we do that we have to make such choices and stay far from home?’” he says.

The uprising in Indian-administered Kashmir began in the 1990s, but in recent years, educated, tech-savvy boys and young men from well-to-do families have been joining home-grown, anti-India groups in droves. Videos posted online, showing mothers pleading for their sons to return home, have become a spectacle in the ongoing conflict. And each time one of the boys or young men is killed, sympathy among other youth grows as the slain fighters are viewed as martyred heroes to revere.

We’re in a situation that is beyond our control.Parvaiz Ahmed Padder

2018 was considered the most volatile year in Indian-administered Kashmir in the last decade. According to the 2018 annual report compiled by Jammu Kashmir Coalition of Civil Society, a group of human rights-focused organizations, 586 people were killed in protest-related violence. Among those, 160 were civilians and 267 were linked with armed groups.

Even for people who aren’t actively engaged in fighting, regular life in Indian-administered Kashmir is often stymied by the conflict. Strict curfews enforced by the military take a serious toll on the region’s economy, making jobs difficult to find. There are also shutdowns when groups who support the region’s independence from India hold protests in the streets.

Shakeel Qalander, former president of Federation Chamber of Industries Kashmir, says each day there is a shutdown or curfew results in the loss of 125 crore (about $18.7 million).

Those shutdowns and curfews have occurred more frequently since Burhan Wani, the venerated leader of a pro-independence armed group, was killed in July of 2016 by Indian forces.

“It has impacted the business community badly as they ought to pay the idle wages and bank interests without any insurance or compensation,” Qalander says.

Unemployment for people aged 18 to 29 in Jammu and Kashmir state, which includes the volatile Kashmir Valley, is 24.6 percent – nearly double the rate for the same age group in the rest of India.

College is no longer a reliable option for young people who want to avoid trouble either. The academic calendar pushes forward every year, regardless of curfews and shutdowns that keep enrolled students from attending classes or completing coursework.

All through this, armed groups look for ways to entice young men to join them. Some boys and men join because they’re fed up with injustices perpetrated by members of the military, including continuous harassment and use of force. Others are moved to join after walking in funeral processions for people who were killed in the conflict. Armed groups welcome their new members regardless of whether their reasons are personal, political, religious or otherwise.

“The entire new generation of youngsters is facing a lack of economic opportunities, unclear identity and growing marginalization,” says Parvez

It’s hard to envision a bright future in Indian-administered Kashmir, he says.

Local demand for Kashmiri-style handicrafts is minimal, he says, but a growing number of young men rely on enduring interest in the rest of India for the products.

For ordinary families, setting their sons up as entrepreneurs selling Kashmiri arts and crafts is not difficult, especially since there is a market for them in and around New Delhi. Travel to and from the Indian capital is relatively easy. 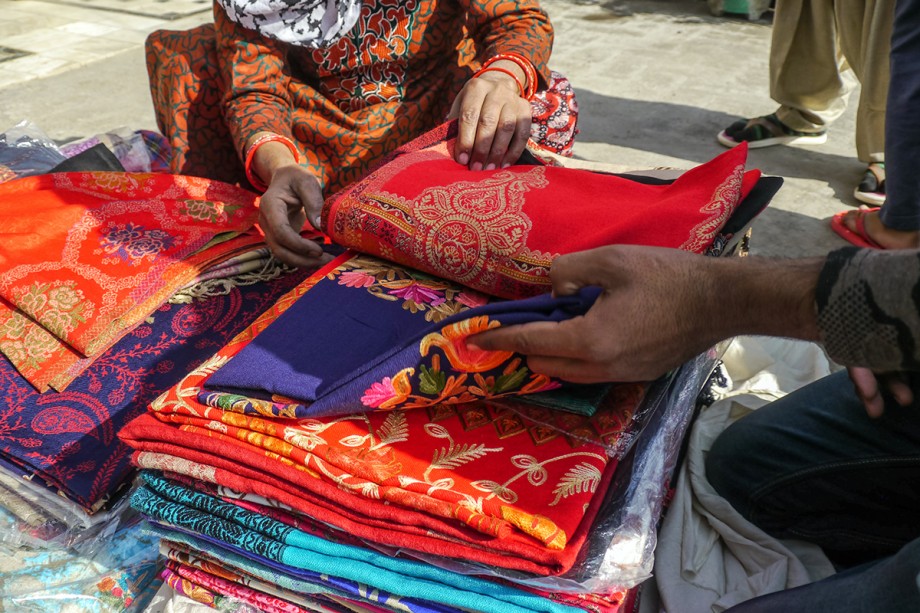 Shawls and other embroidered products from Indian-administered Kashmir are in demand throughout New Delhi.

And the products sell well there. Many families are engaged in manufacturing traditional embroidered items, so the men who leave to sell them in the New Delhi area can make special requests based on designs that are popular with their buyers.

“In the past few years, I have seen many young educated boys in Delhi and other places of India to make a living,” he says.

Demand for embroidered shawls, stoles and dresses is high in the winter, he says.

Parray says many of his friends have come to the New Delhi area, too. He shares an apartment with six other young men from Indian-administered Kashmir. He works with an experienced manufacturer who sends him new items regularly and takes a commission from everything that he sells.

“It is better than sitting at home and stressing your parents,” he says.

Parray says his uncle was killed in 2017 when he was caught in a crossfire between anti-India groups and government forces.

“It is becoming more violent now,” he says. “Locals are consistently caught and getting killed in the crossfire.”

Still, the young men who wind up in New Delhi yearn for home.

And just because Padder has escaped the violence doesn’t mean he’s immune to its effects.

“I think about the safety of my family all the time,” he says. “Our peace isn’t here. It is at home, in that chaos.”