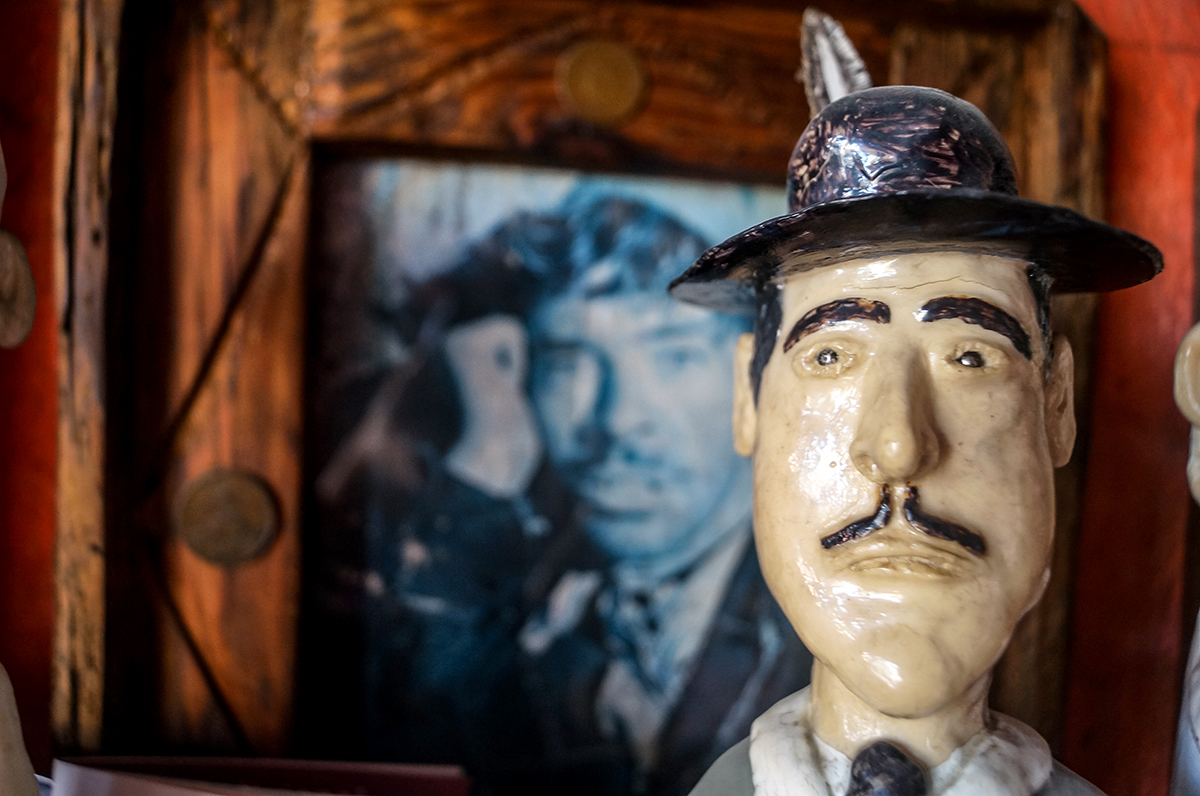 SAN CRISTÓBAL DE LAS CASAS, MEXICO — “The idea isn’t to become famous. I want this to make people happy,” says Jurgen Otto Bluhum Morales, an artist who makes figurines out of clay, papier-mâché and cardboard. “I want them to like it and to notice how beautiful this type of work is.”

His work is exhibited at the Museo Coljob, or Coljob Museum, in the city of San Cristóbal de las Casas, in the southern state of Chiapas, Mexico. The museum also displays antique objects that have been collected for the past 20 years, but the main attraction is the figurines.

For Bluhum Morales, the idea to begin creating figurines came when someone suggested that he should keep his mind occupied with something positive. He says that his initial concept was to make all of the figurines life-size, but now most of them are much smaller.

In the museum there are about 70 figurines, three of which are life-size and 25 of which are dedicated to celebrities who are natives of the city of San Cristóbal de las Casas. 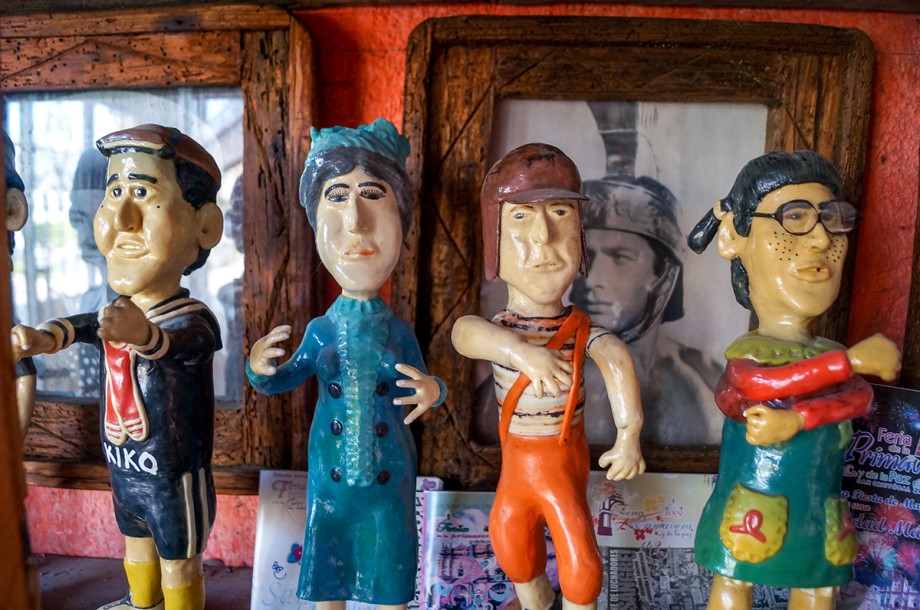 There are more than 70 figurines in Museo Coljob, including celebrities such as Manny Pacquiao, a Filipino boxer; Hugo Sánchez and Cuauhtémoc Blanco, both Mexican football players; Nelson Ned, who was a famous Brazilian singer; and a collection (pictured here) dedicated to El Chavo del Ocho a famous television program in Latin America.

“First, I began with national and international celebrities, but then a very important idea comes to me: that local celebrities exist everywhere, and there are many here in San Cristóbal,” says Bluhum Morales. “Today I know of these various celebrities well and I like to recreate them in clay for exhibition, with their consent.”

Bluhum Morales says he began making figurines in his early 30s. Today he is 52 years old.

The first figurine he made was Vicente Fernández, a Mexican ranchera music singer. He says that before making each figurine he spends time researching the subject.

María Cartones was the first figurine to represent the city of San Cristóbal de las Casas.

“I spoke with city historians and I wrote up a short summary based on newspaper articles, to avoid making anything up,” says Bluhum Morales.

He says that María Cartones was an indigenous woman who wandered the streets of San Cristóbal de las Casas. She was called María Cartones because she always shielded herself from the sun or rain with a piece of cardboard (“carton”) over her head. When she came across a puddle she would scoop up mud and smooth it over her face. 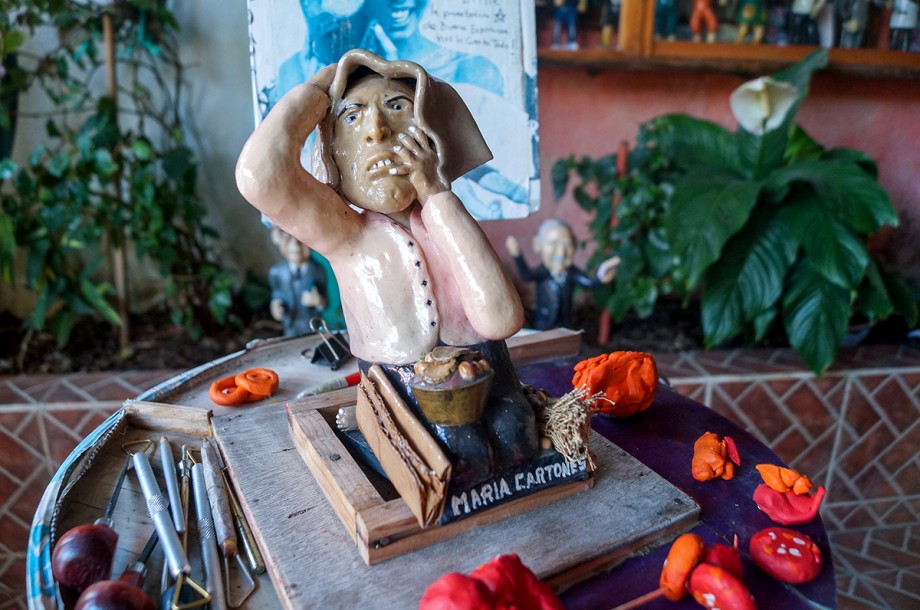 María Cartones, an indigenous woman who wandered the streets of San Cristóbal de las Casas, was one of the first locals to be made into a figurine by Bluhum Morales.

Another emblematic person in the city is Nacho Loco, or Crazy Nacho.

“Here in San Cristóbal there are still people who scare their children and their grandchildren — ‘If you don’t do your homework, if you don’t eat, if you don’t sleep, Nacho Loco will come get you,’” says Bluhum Morales. “The legend is that he would spend months and months without changing his clothes or bathing, and that he would wear an old quilt. The wind would carry his stench and that’s why he scared us.”

There are three other significant personalities: Subcomandante Marcos from the Ejército Zapatista de Liberación Nacional, the Zapatista army; Tatic Samuel, a bishop of the San Cristóbal diocese; and the late coleto photographer Vicente Kramsky Coello.

“I speak with those who are still alive, and I ask them if they’d like to appear among the celebrities. The majority of them, believe me, they tell me the recognition is like a gift, that [they] would trade it for a diploma that has been given to [them] from somewhere — a medal. Because this stays captured, stays for life,” says Bluhum Morales.

“It’s important because I believe the saddest thing for an artist is to be forgotten,” says Emilio Gómez Ozuna, the director of the museum.

Gómez Ozuna has known Bluhum Morales since he was a child.

“He is a great cardboard artist. He makes life-size figurines out of cardboard, and has revived many local heroes, something he does from his heart which I like. I think he’s the best person to do this work,” says Gómez Ozuna.

In celebration of the 101st birthday of the building where La Enseñanza Casa de la Ciudad is housed, Gómez Ozuna invited Bluhum Morales to create an exhibit.

“The idea was to bring him here because this house represents the past 100 years of San Cristóbal, of the nearly 500 years of history,” says Gómez Ozuna. 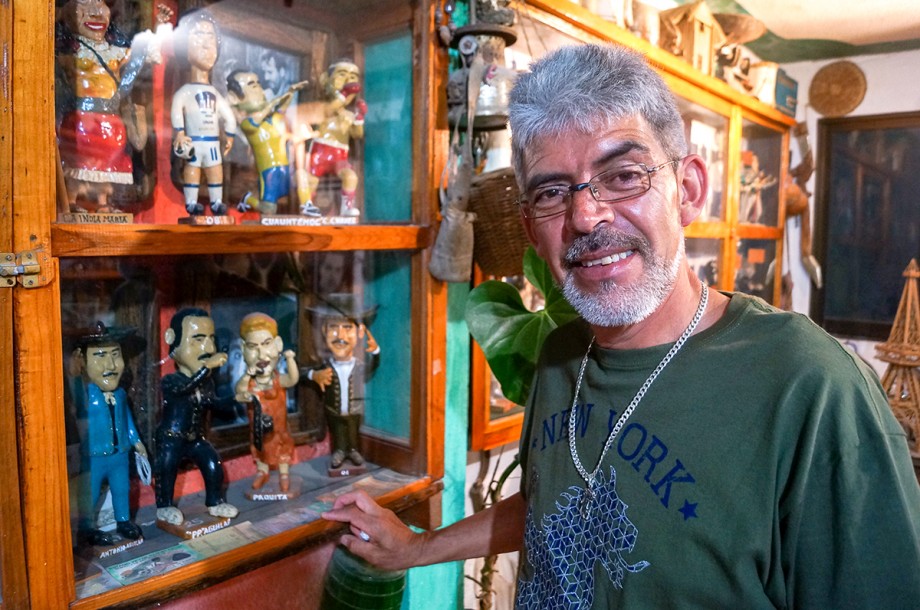 Bluhum Morales stands in front of one of many glass display cases, where his figurines are on display.

During that exhibit, Bluhum Morales says, he was asked by a reporter about who his favorite figurine was. “I answered that I didn’t have a favorite and that for me, all of them have something special, each one in its own way,” says Bluhum Morales.

Gómez Ozuna is among the many honored by Bluhum Morales with a figurine. He says that Bluhum Morales approached him and asked his permission first, and he gratefully accepted.

It took three months to make the figurine, and the resemblance, Gómez Ozuna says, is uncanny. But it was the recognition by Bluhum Morales that meant a great deal.

“I would say, it’s more enjoyable when the community recognizes you than when the government or an official political party recognizes you. Sometimes they do it to flatter you, or to take the photo themselves. They want it to be known that they recognized a certain person. But he doesn’t,” says Gómez Ozuna, referring to Bluhum Morales. “With his common sense, he sees someone and says, ‘I think that’s the right person to focus on.’”

In addition to the figurine preserved in Museo Coljob, Gómez Ozuna was given a replica to keep in his home.

Despite being approached by people who would like him to make a figurine of them, Bluhum Morales doesn’t work on commission.

“I don’t work like that because, can you imagine? Say I tell you that I’ll charge 1,000 pesos ($55) to personalize a certain figurine and when they come to pick it up they say, ‘Ah, I didn’t like this,’ ‘it came out too short, it came out too fat,’ and I’m left unhappy,” says Bluhum Morales.

Another reason he doesn’t work on commission, he says, is because not everything in life is about money.

“[They’re] born from my heart,” he says. “This revives me, it gives me more motivation to continue.”

For Gómez Ozuna, it’s important that local artists leave their mark on the world. People, he says, like Bluhum Morales, have to be recognized for their work. 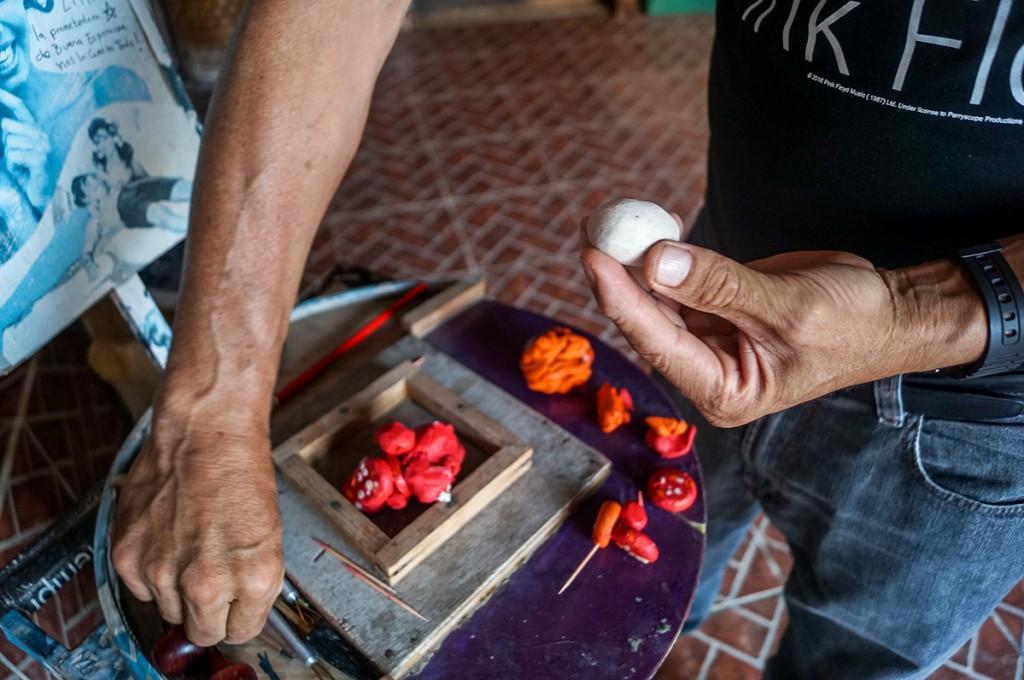 Bluhum Morales uses clay of many colors to create his figurines. He holds a small piece of the clay, and begins to mold it into the shape of a head. 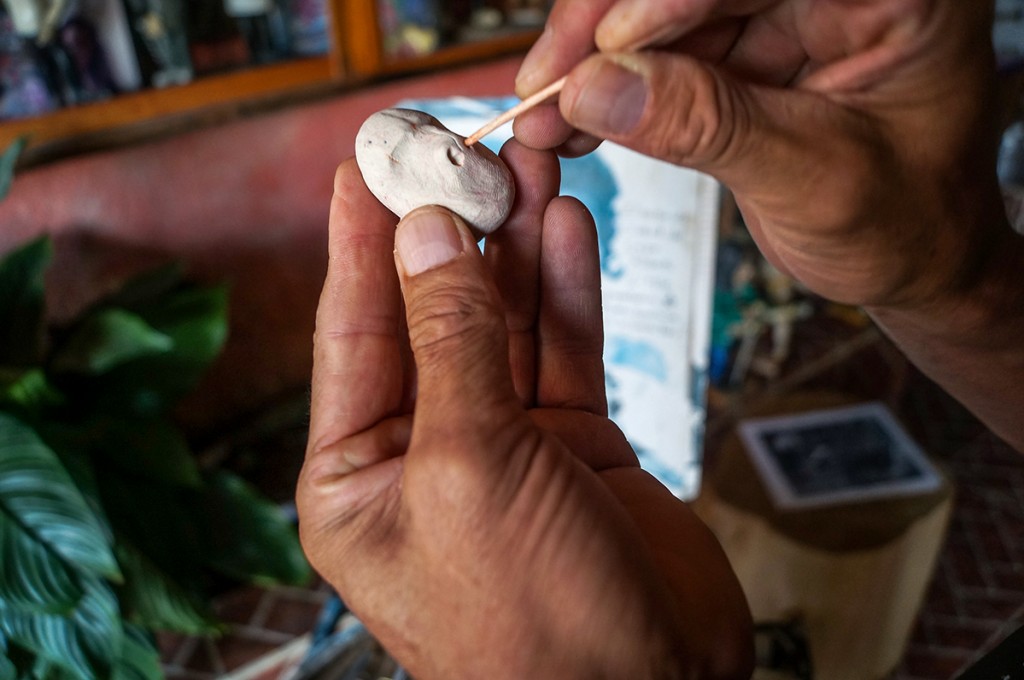 A small toothpick is used to shape the features of the head, including the nostrils, pictured here. 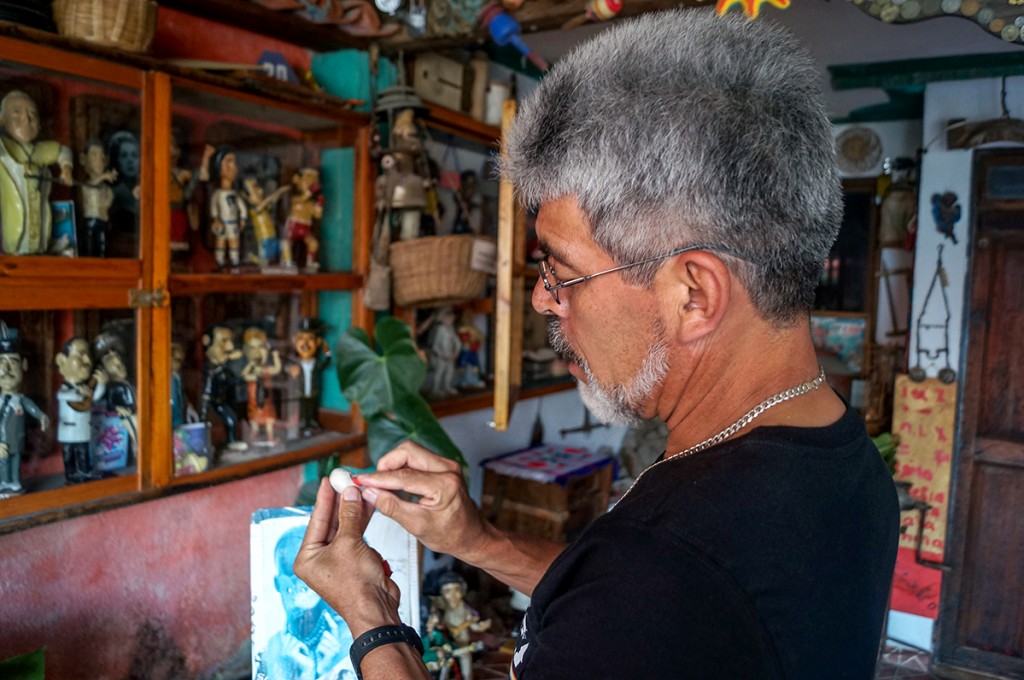 Bluhum Morales adds a piece of red clay to the cheeks of the figurine. 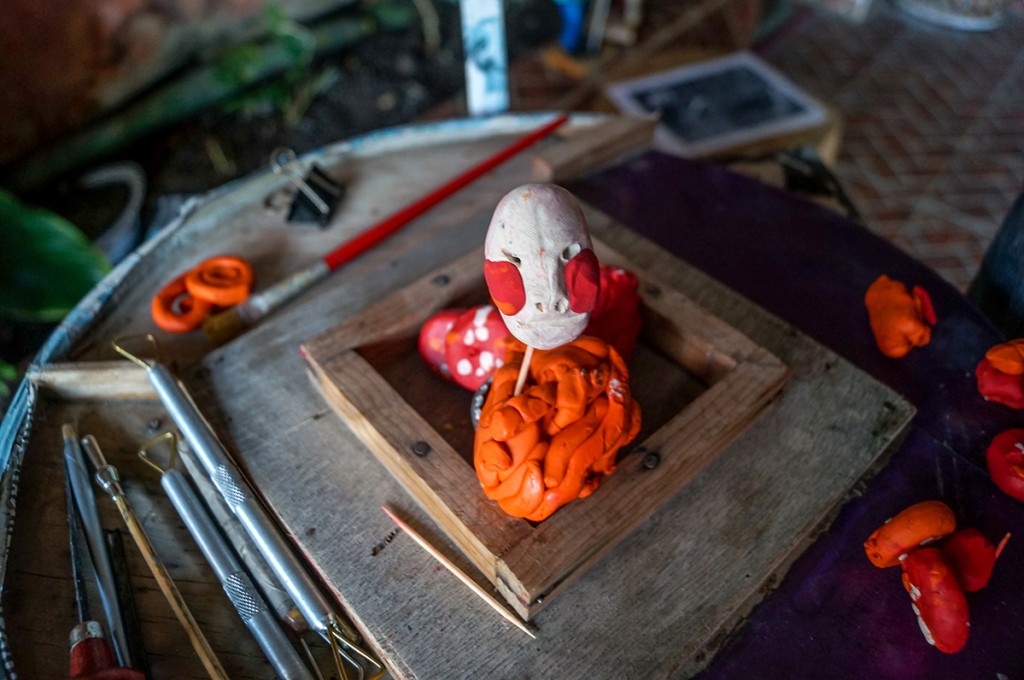 The head of the figurine, a work in progress, awaits further creation on Bluhum Morales’ work table. 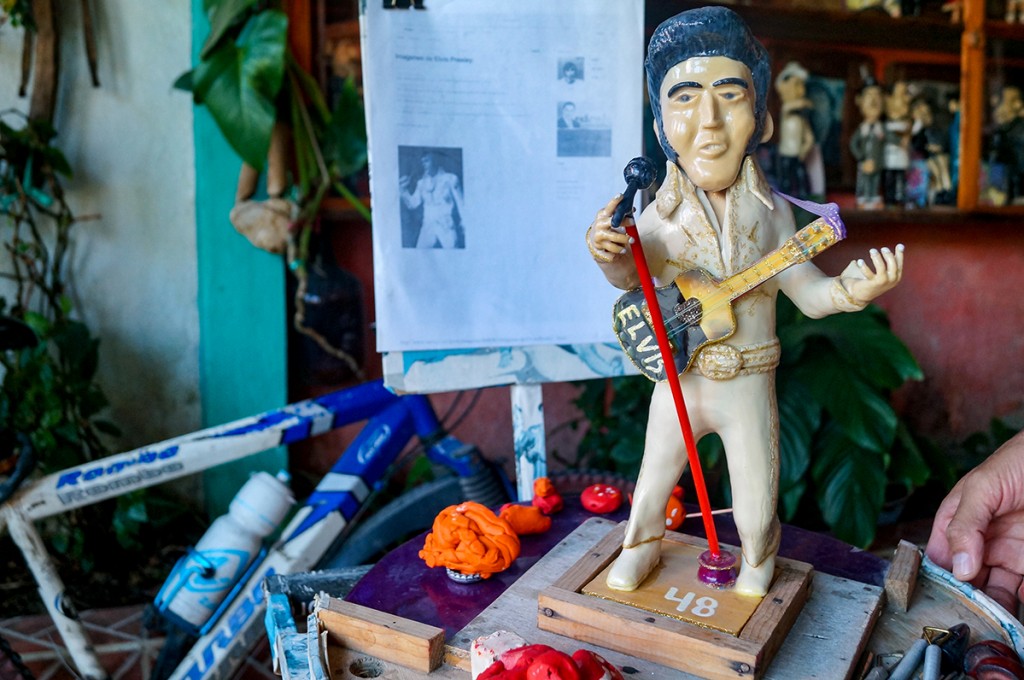 Eventually, the new figurine will be completed and join the other figurines — such as the late Elvis Presley, a famous American singer — on display. 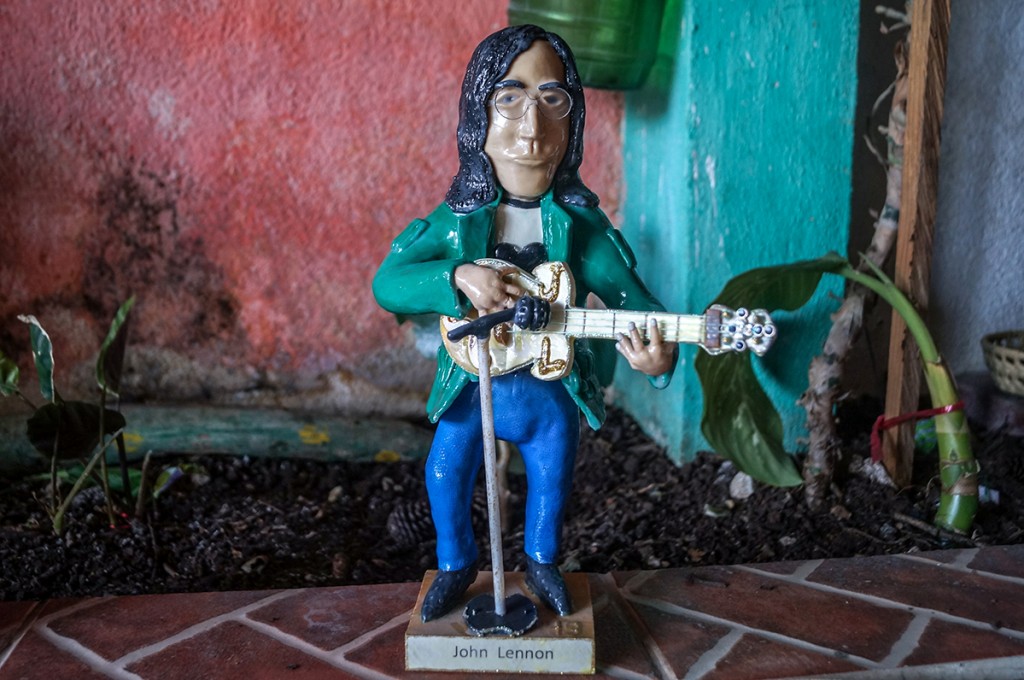 Or the late John Lennon, of the famous British band, the Beatles. 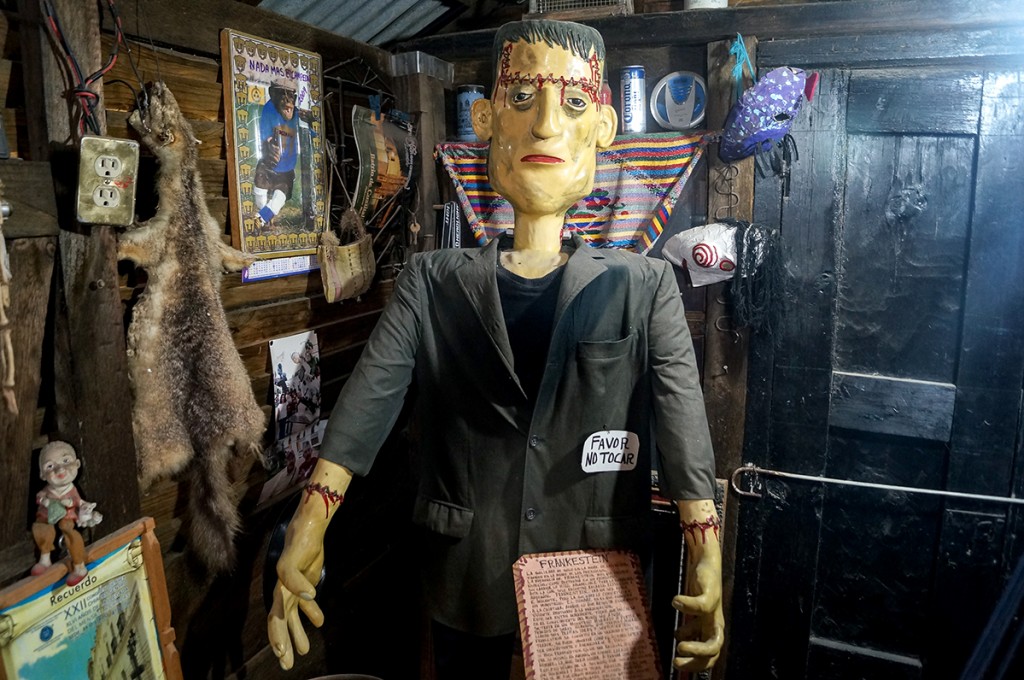 Not all of Bluhum Morales’ figurines are tiny. He began his museum by making life-sized sculptures, such as Frankenstein’s monster, from Mary Shelley’s 1818 novel, “Frankenstein”. 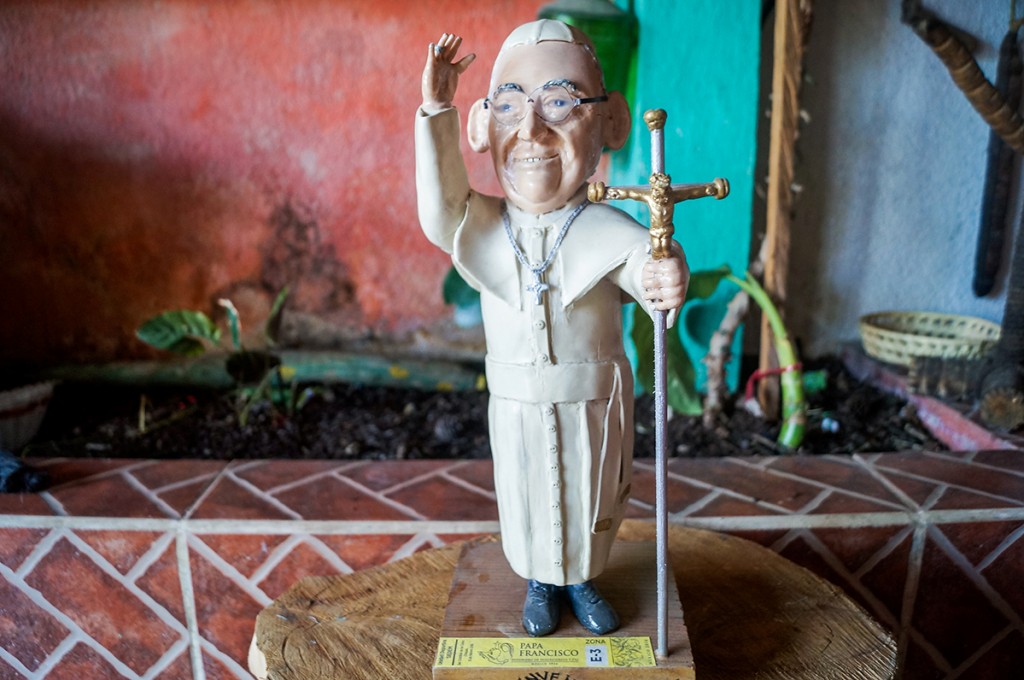 Among other famous personalities, there are two popes on display in Museo Coljob: Pope Francis, the current pope, and Pope John Paul II. 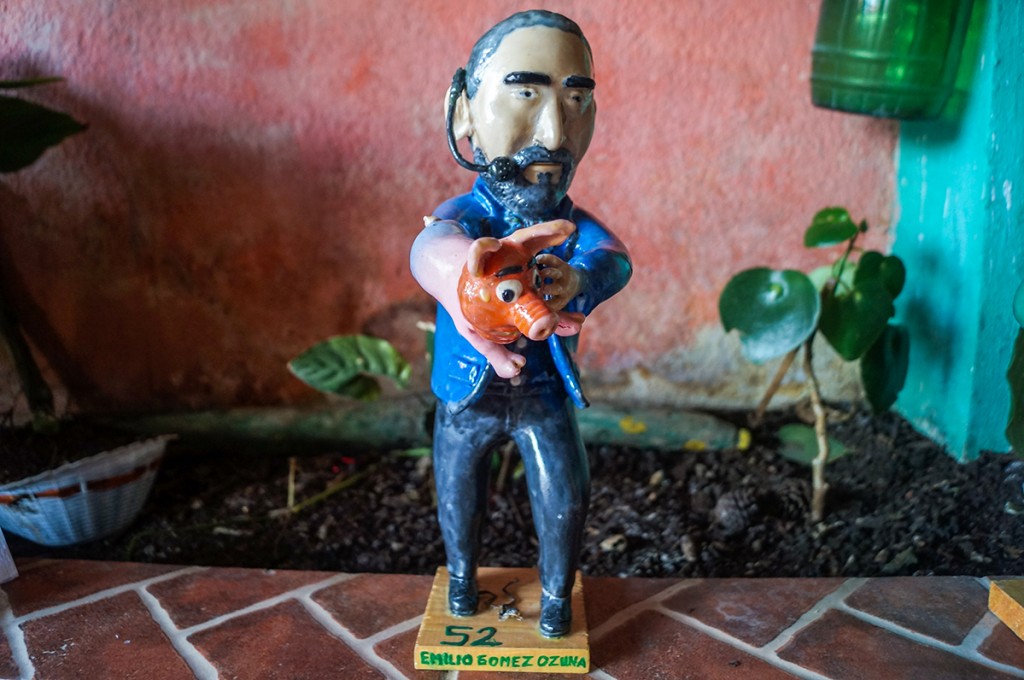 Emilio Gómez Ozuna, the director of La Enseñanza Casa de la Ciudad, in San Cristóbal de las Casas, and other emblematic persons in the city are featured in the museum. 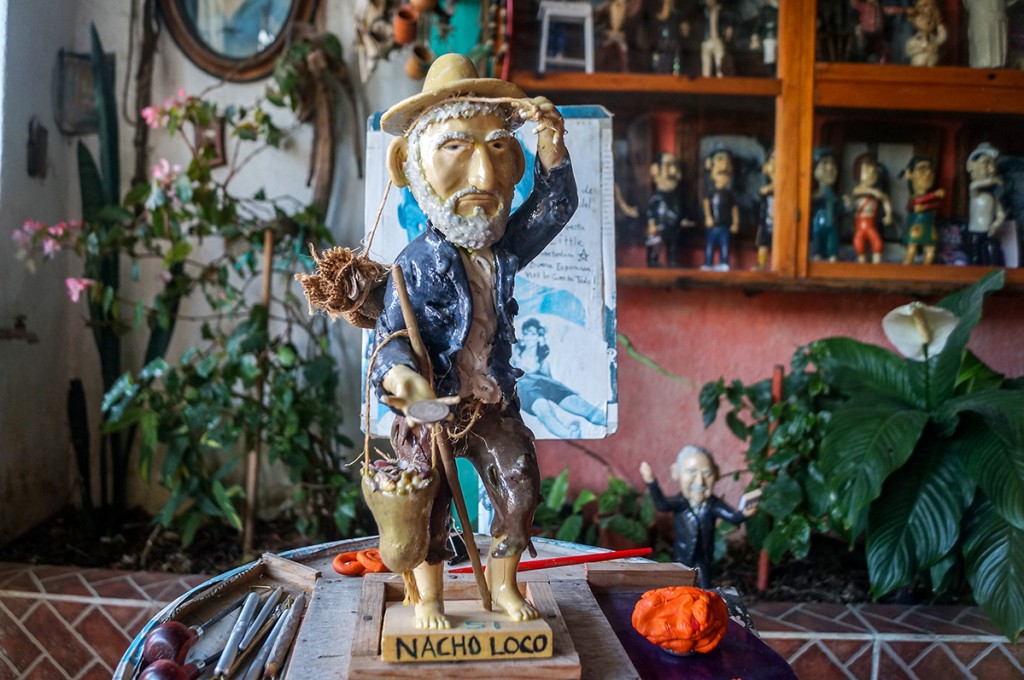 Local legends, such as Nacho Loco, or Crazy Nacho, are also on display in Museo Coljob.