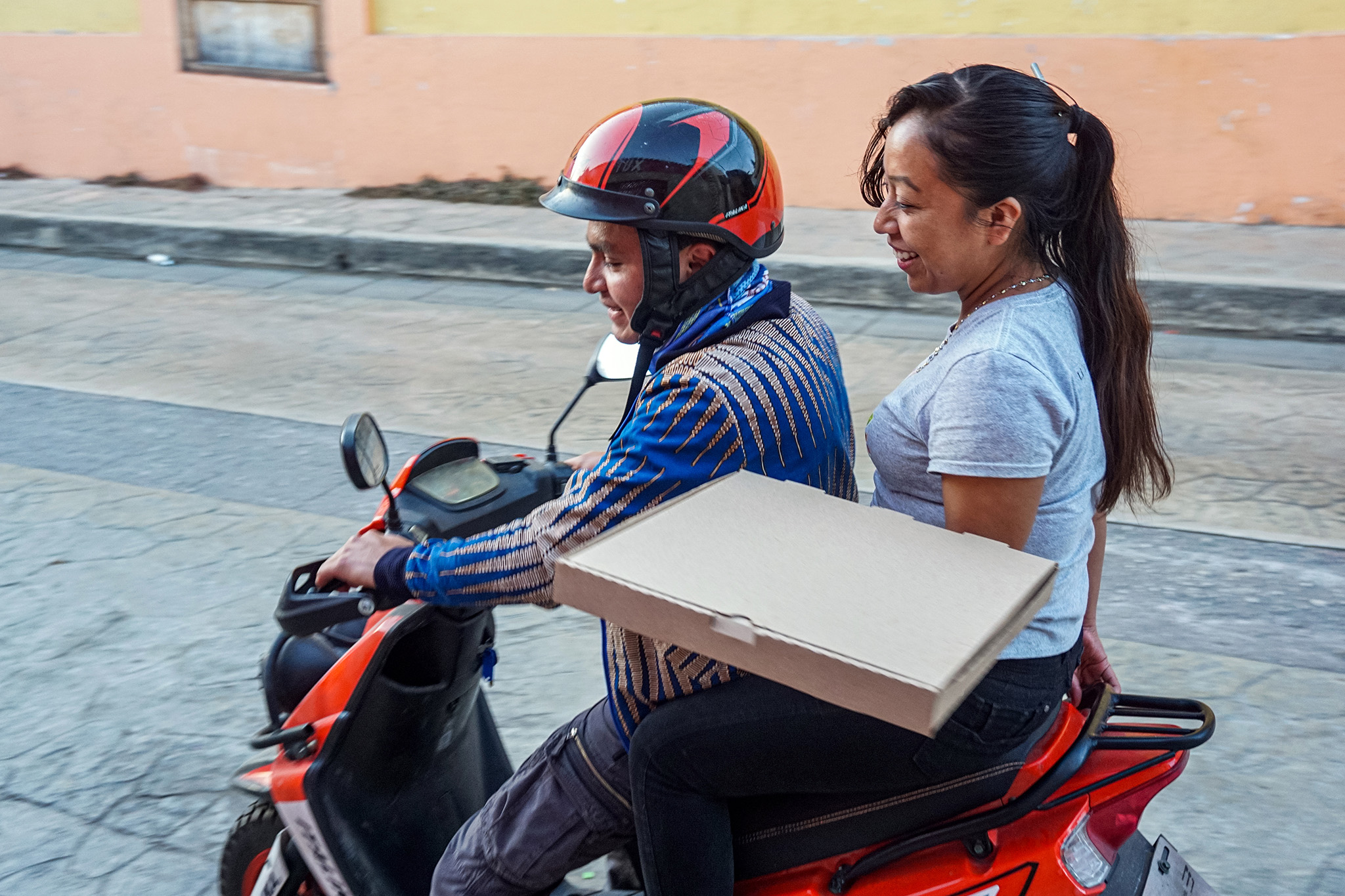 SAN CRISTÓBAL DE LAS CASAS, MEXICO — After packing the piping hot pizza he just removed from an oven, Juan Carlos Hernández Álvarez stops to double-check the address in a WhatsApp message on his phone.

Hernández Álvarez is in the kitchen of Taniperla restaurant in this city in Chiapas, Mexico’s southernmost state. Just over a month ago, he could have carried the pizza out to one of the customers at a table in the restaurant. But now he’ll ride his motorcycle to an address about 5 kilometers (3 miles) away.

“We closed to the public and reduced our menu to only take-out food,” Hernández Álvarez says while strapping on his motorcycle helmet.

He says he never thought he’d have to use his motorcycle for work. But in late March, when the Mexican government issued nationwide stay-at-home guidelines and suspended all nonessential activities to prevent the spread of the coronavirus, he says home delivery became essential.

One of five brothers who founded the Taniperla restaurant in 2018, Hernández Álvarez says that before the government’s order, none of them had ever considered a home delivery option.

In fact, few restaurants in San Cristóbal de las Casas previously provided home delivery service, because they had never needed to, says Sergio Alejandro Flores López, the city’s representative to the Confederation of National Chambers of Commerce, Services and Tourism. 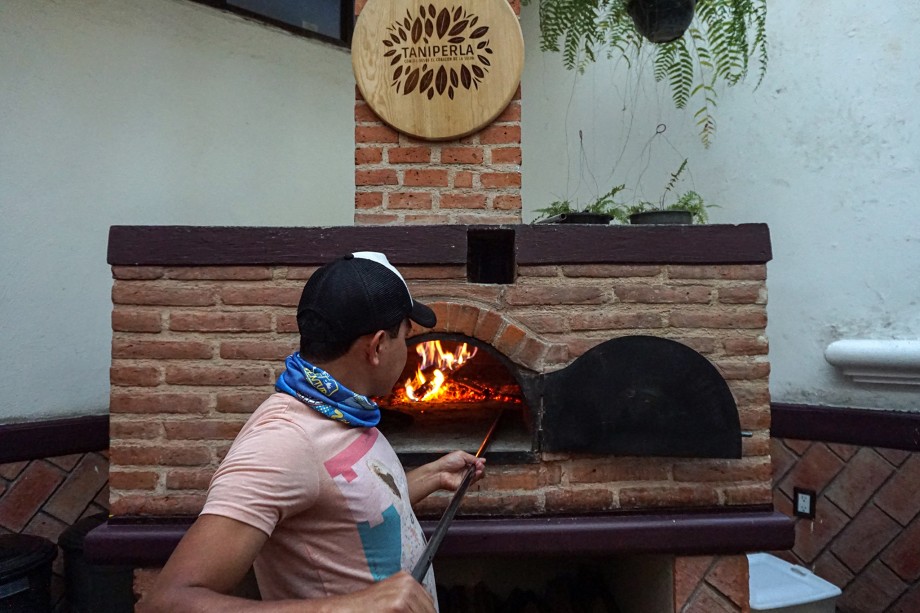 Juan Carlos Hernández Álvarez, one of five brothers who own the Taniperla restaurant in San Cristóbal de las Casas, Mexico, removes a pizza from a brick oven. The restaurant developed a home delivery system in hopes of generating revenue during the coronavirus shutdown.

Before the shutdown, the city’s restaurants, like much of the rest of the economy, was driven by tourism.

Between January and December 2019, San Cristóbal de las Casas generated 5.4 billion Mexican pesos (MXN) ($220 million) in tourism revenue, which made up 22% of the Chiapas state tourism revenue total of 23.9 billion MXN ($972 million), according to data from the Chiapas Ministry of Tourism.

That kind of economic prosperity was what brought the five Hernández Álvarez brothers to San Cristóbal de las Casas in the first place.

The brothers, who are from the Ocosingo jungle area of Chiapas, about 95 kilometers (59 miles) away, saw an opportunity to provide diners with recipes featuring the flavors of the Tseltal jungle, such as empanadas with banana tortillas, chipilín soup with corn dough, and chicken with ground pumpkin seeds. Today, the restaurant also serves classic favorites including pasta, pizza and burgers.

Social distancing initiatives implemented as a result of the coronavirus outbreak forced the Hernández Álvarez brothers to be even more creative — and to think fast. They knew their customers loved their food, so the challenge became giving diners continued access. 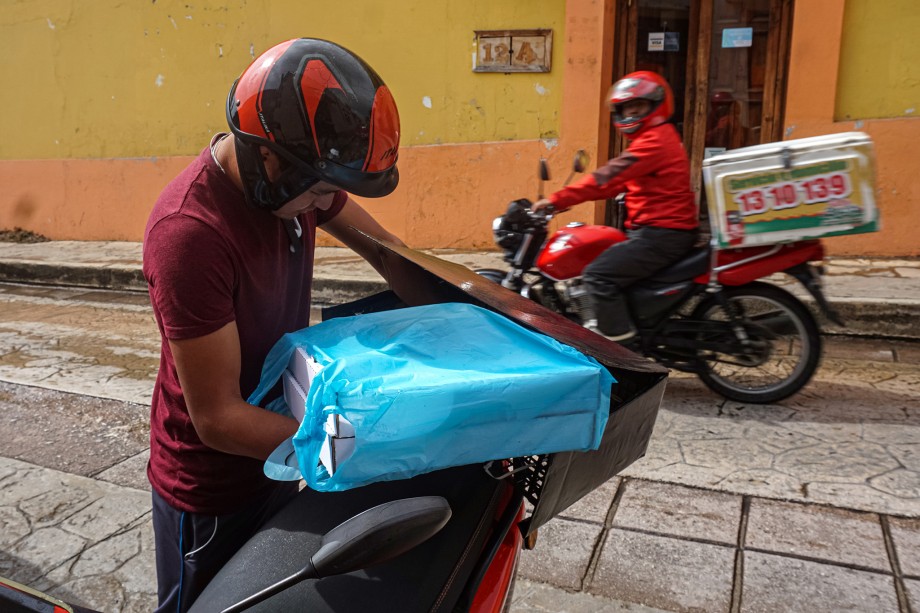 Juan Carlos Hernández Álvarez prepares an order of food from Taniperla restaurant to be delivered to the Fray Bartolomé de Las Casas Center for Human Rights. Most offices in San Cristóbal de las Casas, Mexico, are closed, but others remain open with reduced staff.

But it’s a struggle to earn enough money from home delivery orders to pay rent and utilities, and the employees. José Manuel Hernández Álvarez says so far they’re paying employees from their savings.

Jorge Hernández Castro, a regular customer at Taniperla, says the deliveries have been a welcome convenience. Hernández Castro is a defense attorney at the Fray Bartolomé de Las Casas Center for Human Rights and says he cannot work from home full-time.

“On the days when I have to go into the office, I use Taniperla’s food delivery services. That way, I avoid having to go out in the streets and exposing myself to possible infections,” Hernández Castro says.

Other restaurants have started home delivery too. But business remains challenging.

Kinoki, a popular restaurant, has shortened its hours, began home deliveries and started offering three meals for the price of two, all in an effort to attract customers, manager Alberto Domínguez Ramos says.

“We are barely meeting our employee, rent, water and electricity costs, but we have to figure out how to stay active,” Domínguez Ramos says. “For now, we still have the option to avoid closing completely.”

This kind of initiative has not gone unnoticed by local officials, and they hope to find ways to further support local restaurants, says Claudia Patricia Sancho Aguilar, who coordinates the Industry, Commerce, Tourism and Crafts Commission in San Cristóbal de las Casas.

“We recognize that actions such as home delivery do not offset the [financial] impact of the coronavirus pandemic,” Sancho Aguilar says.