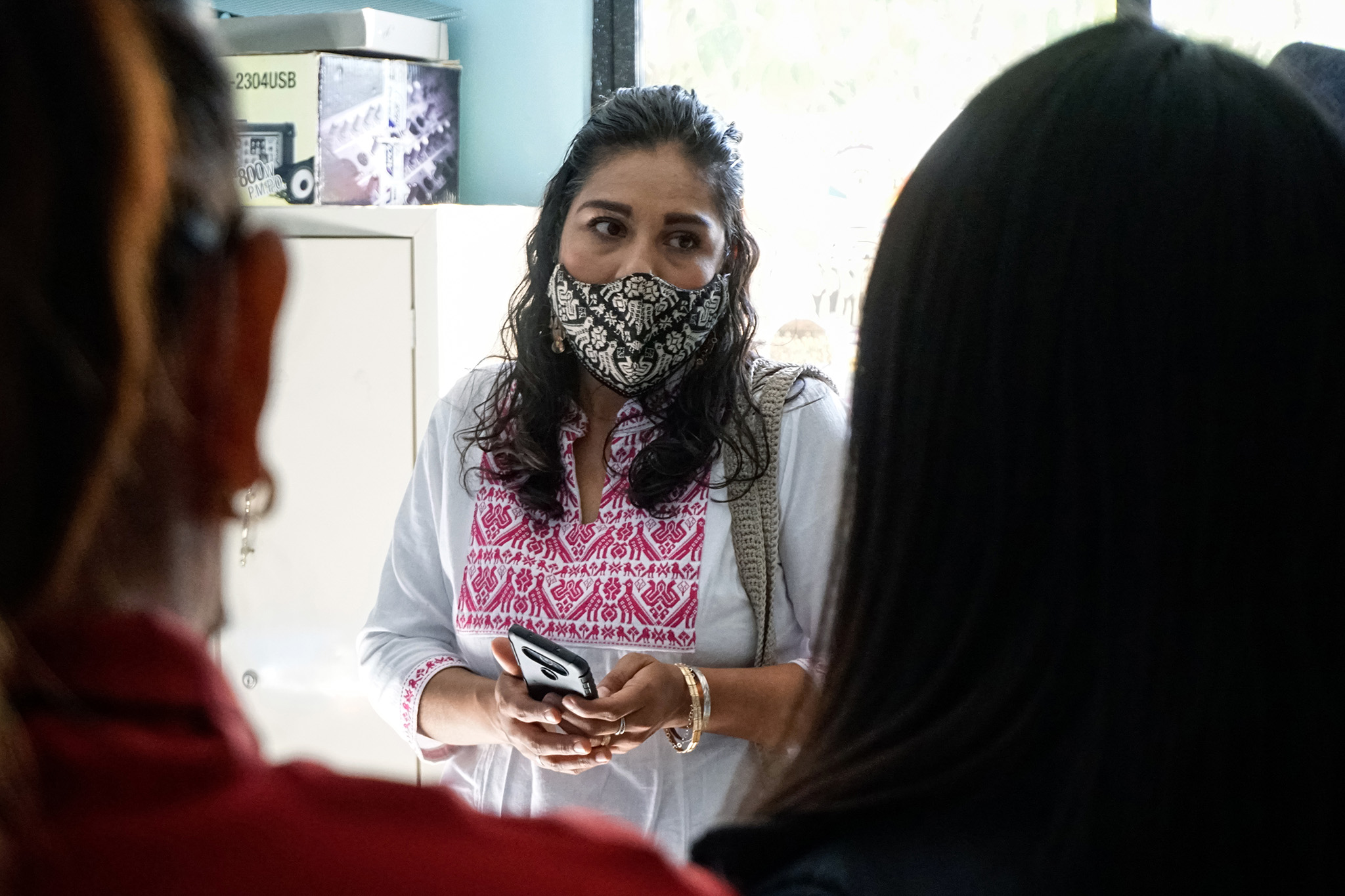 HIDALGO, MEXICO — Anayeli Mejía is taking questions. But the men on the screen — and they are all men — seem skeptical of her answers, as they lob the same queries again and again.

Mejía responds in a calm, strong voice. Friendly and respectful, she jots notes. And when she doesn’t know something, she promises to get back to the questioner.

Mejía, 31, is the first woman elected to lead the Hñahñu Supreme Council, an influential group that advocates for indigenous people in the state of Hidalgo. She is hosting a livestream event on Día Internacional del Migrante (International Migrants Day) to honor those who have moved far away but remain connected to home.

“Home” is the Valle del Mezquital region, 152 kilometers (94 miles) north of Mexico City. In recent decades, scores of residents from the region have migrated to the United States.

Now, during the virtual event, Mejía explains the services the council offers to migrants and answers questions about visas and other issues.

Her easy confidence belies the revolutionary nature of her 2018 victory, which symbolized progress for both indigenous people and women in a country where those groups continue to struggle for greater social, economic and political standing. 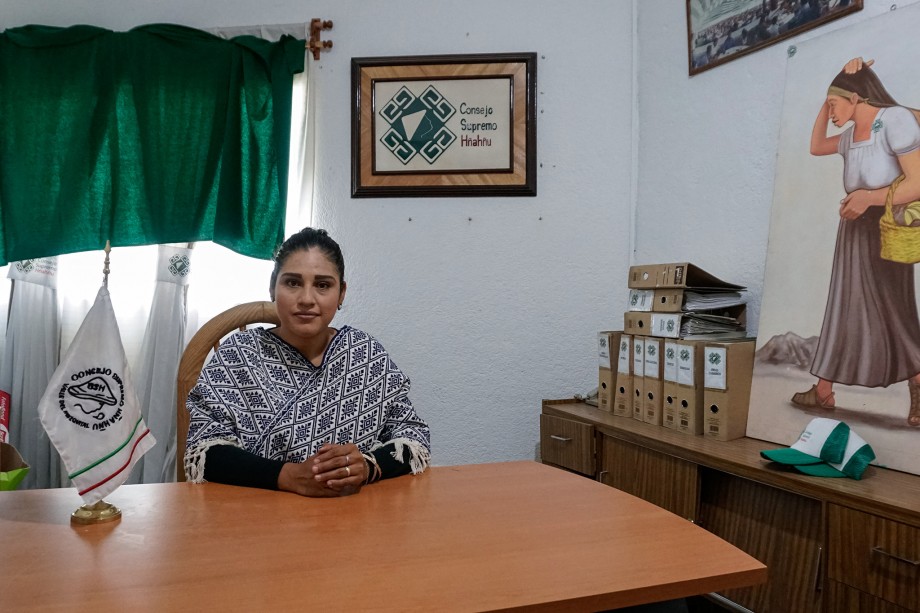 Anayeli Mejía works in the offices of the Hñahñu Supreme Council, located in downtown Ixmiquilpan in Valle del Mezquital, only two days a week because of coronavirus restrictions.

“Being both a woman and an indigenous person in Mexico forces you to live with double discrimination,” Mejía says.

Last year was perhaps the most dramatic of Mejía’s tenure. As hundreds of thousands of women in Mexico protested femicide – the murder of women and girls because of their gender – Mejía made the council’s offices a temporary shelter for women. It was thought to be the first such shelter in Hidalgo.

“I talked with human rights defenders,” Mejía says in her typically understated style, “and they said shelters are really important.”

The Hñahñu, or Otomí, people have lived in central Mexico since pre-Hispanic times and were among the most dominant groups in that region for centuries. They are mainly subsistence farmers who are also known for their colorful textiles and embroidery work.

The Hñahñu Supreme Council has existed since 1975, created to link the indigenous community and government. It spotlights issues most important to indigenous groups, including economic development, the high rate of migration to the U.S., discrimination and gender equality.

Over the years, however, the 65-member council chose only men as leaders. But the status and strength of women grew as more joined the group. 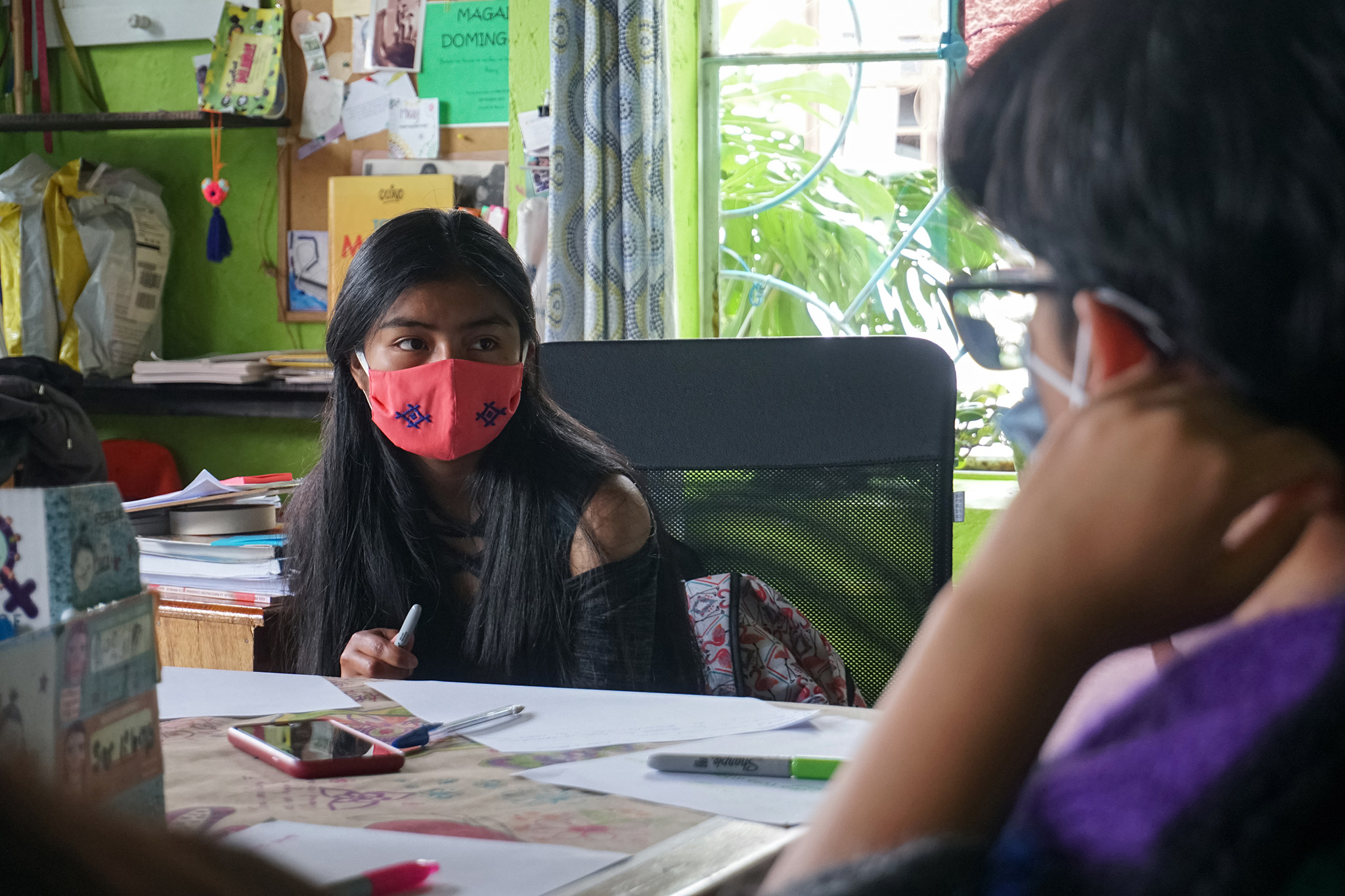 Mejía’s contact with the council began as a teenager, when she joined her parents in their community work and got an up-close view of the organization. She says she never planned to take an official role on the council, but as she continued to work with its representatives, she changed her mind.

Still, she was no shoo-in for president. For one thing, she didn’t speak the Hñahñu language fluently. For another, she was an outsider who lived in a community next to Valle del Mezquital.

After she prevailed, Mejía focused on traditional priorities. She embraced the annual Hñahñu gathering of artisans and farmers, where they sell their products and spend time with one another. And the council continued to help locals with visa paperwork for travel to the U.S.

“She’s an amazing woman,” says Mónica Trejo, a Mexican migrant from Valle del Mezquital who currently lives in Florida in the United States. Trejo says the council helped her mother visit her in the U.S. after 14 years apart.

“Being both a woman and an indigenous person in Mexico forces you to live with double discrimination."Anayeli MejíaFirst woman elected to lead the Hñahñu Supreme Council

“I feel nothing but gratitude toward her,” Trejo says. “I am completely sure that she understands what we need, and I think she’s committed to helping people in the region.”

Mejía also has focused on gender issues. She has lashed the government for its lack of support on issues such as violence against women. She chose to open the women’s shelter herself because “negotiating with the government for a shelter could be very time-consuming.”

At council meetings, Mejía addresses attendees – both men and women – respectfully, using the more formal Spanish version of “you” (“usted”) instead of the casual “tú.” She always introduces council members to the audience before they speak, and when they are talking, she never interrupts.

Her self-effacing nature surfaces in small but telling moments. At one meeting, council members gathered for a photo and insisted that she stand in the center. She demurred and smiled, reminding them that everyone is equal. Her colleagues laughed and joked with her.

The Global Press Style Guide features a new entry on the use of gender-inclusive word choices in lieu of the masculine form of plural nouns or pronouns. This ensures precise references and source dignity.

“Although they say that the services they offer are free, the council has received money from the PRI,” he says, referring to the Institutional Revolutionary Party, the political party of Hidalgo’s current governor.

Mejía denies receiving money from the group, although she notes that some previous council leaders have openly sympathized with the party.

And María Bautista, who once sought economic support after the United States deported her husband, says the council picked Mejía as a token nod to gender equity.

“They even say they agree with abortion and support feminist issues,” she says, “but they are still the same, only they put a woman in front. We will have to wait to see if there are results that benefit women.”

Mejía has won over at least one detractor.

Enrique Atriano joined the council’s Día Internacional del Migrante event from Idaho, a state in the northwest United States. He has lived in Idaho for more than three decades and tried to bring his mother over for a visit for 20 years without success. Finally, with the council’s guidance and support with the visa process, it happened.

“I thought they were going to want to take money from us,” he says. “I think it makes a difference that a woman is at the head of the Hñahñu Supreme Council. The truth is that women are more honest and orderly.”