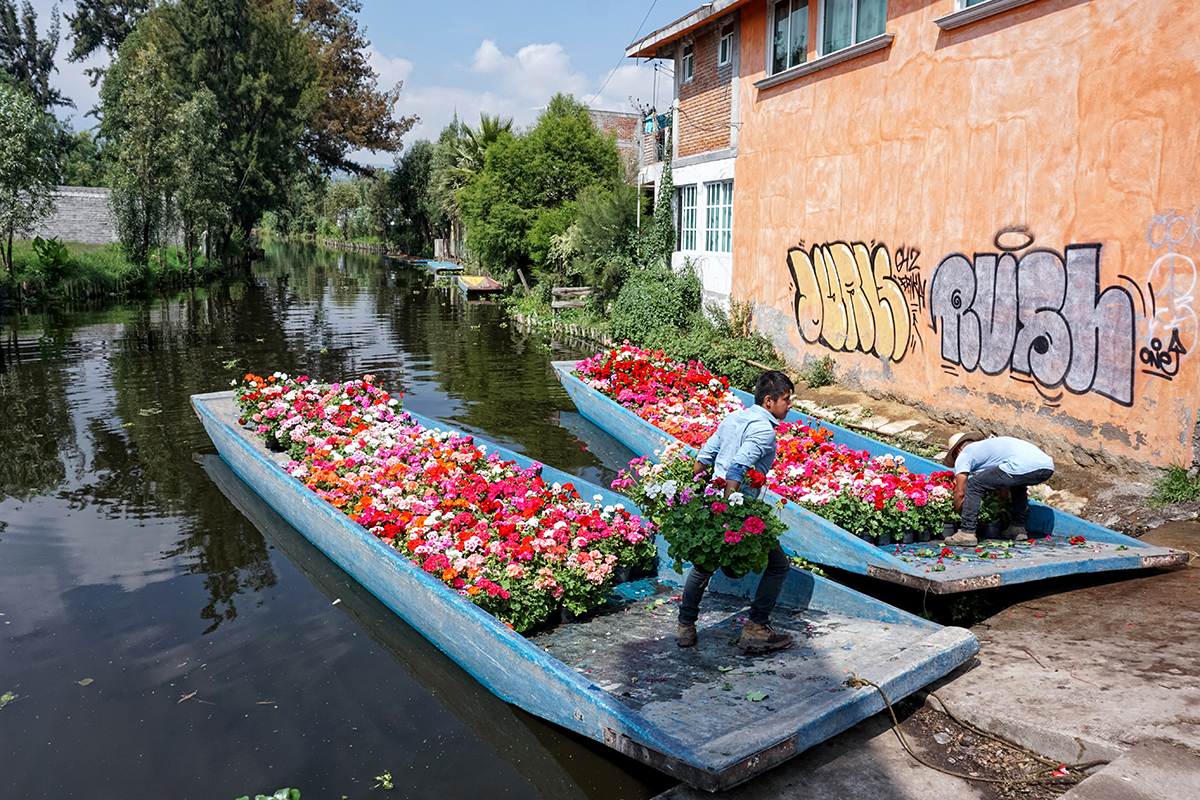 MEXICO CITY, MEXICO — Next to the greenhouse where he grows vegetables, Rodrigo Alvarado Venancio says there was once a small waterway.

Now, there is a concrete path and nearby buildings.

“There were no houses,” Alvarado Venancio says, looking out at what’s left of the agricultural landscape in San Gregorio Atlapulco, a town in Mexico City’s southern Xochimilco borough. The area where 78-year-old Alvarado Venancio works is quickly becoming a battleground for new homes and other properties.

Both newcomers to the area and longtime farmers like Alvarado Venancio are building houses and businesses along Xochimilco’s canals and floating crops, called “chinampas” – even though the government forbids development where the crops are located.

“They have children, and they don’t have anywhere to live,” Alvarado Venancio says of his fellow farmers. “They have to give them somewhere to live.” 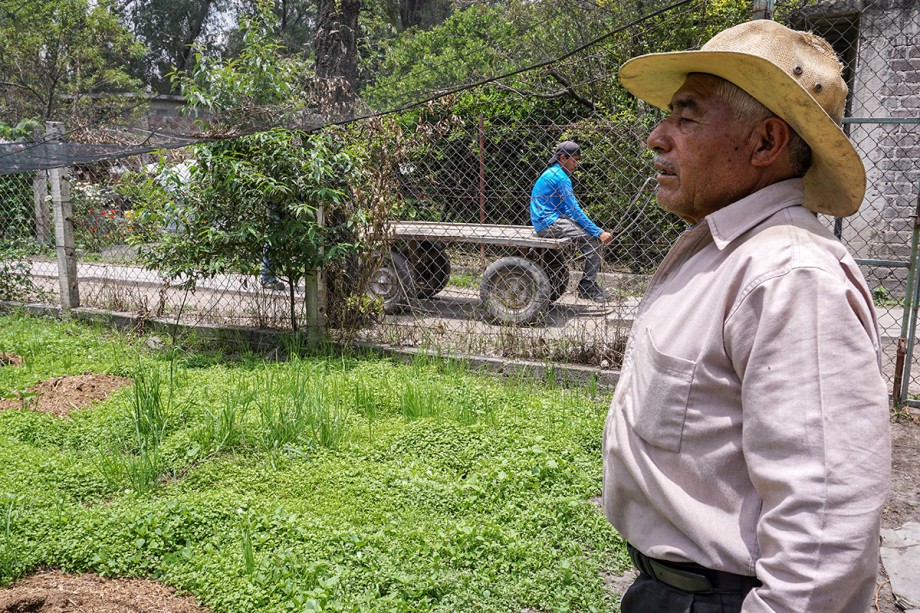 Rodrigo Alvarado Venancio grows lettuce and other vegetables in San Gregorio Atlapulco, a town in Xochimilco. His children have built homes close to his greenhouse.

Alvarado Venancio himself has given his five children some of his farmland so they can build homes. But he admits that construction here contributes to pollution.

The chinampas of Xochimilco date back to the 16th century, and in 1987, UNESCO added the aquatic landscape, located 28 kilometers (17 miles) south of central Mexico City, to its list of World Heritage Sites. But the canals on which the floating crops are found are getting dirtier and dirtier, local environmentalists say, and some fear the pollution will harm the ecosystem.

There is high demand for residential space in Xochimilco as the population of Mexico City, the country’s capital, continues to grow and expand into uninhabited land. While authorities struggle to regulate urbanization, local researchers are looking for ways to prevent pollution in the canals.

As of 2015, Mexico City’s population is 8.9 million, according to Instituto Nacional de Estadística y Geografía, the government census agency. Experts say the number of residents in and around the capital is still growing.

Between the 1960s and 1980s, many people moved from central Mexico City to live south of the capital, where there was available land, says Enrique Pérez-Campuzano, a geography researcher at the Universidad Nacional Autónoma de México (UNAM), a state university in Mexico City.

The government has declared 82 percent of Xochimilco’s more than 12,000-hectare surface area Suelo de Conservación, or conservation territories, where Áreas Naturales Protegidas, or protected natural areas, such as the chinampas, are found. 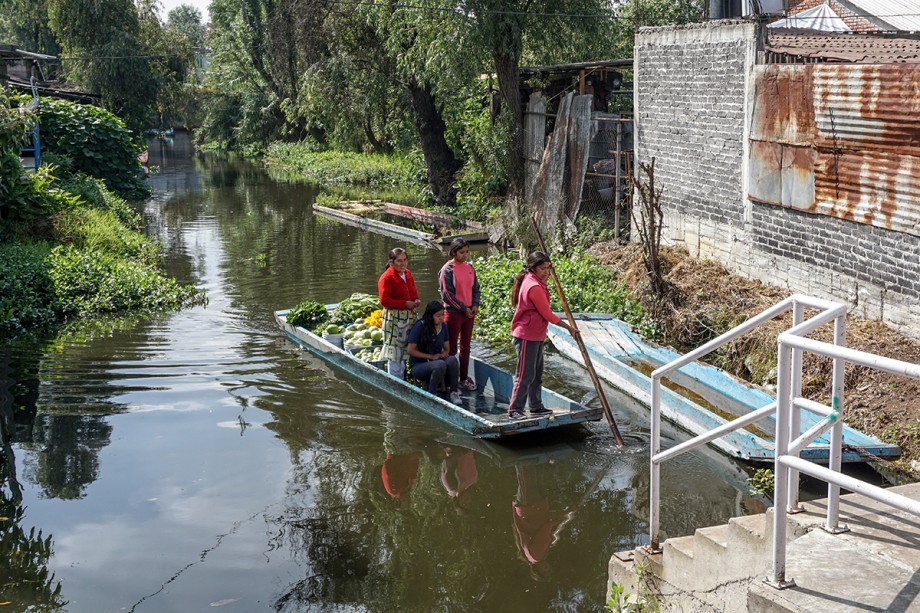 A group of farmers transport goods on a canal in Xochimilco, Mexico.

For years, the borough has tried to curb population growth in the settlements that have cropped up in protected areas. Since 2015, the local government has cleared about a hectare of illegal settlements, says Ramón Costa Ayube, coordinator for advisors in the borough.

Since most of these settlements have no drainage system, hundreds of homes and businesses dispose wastewater into the canals. A 2015 study conducted by UNAM’s Instituto de Ingeniería, an engineering institute, registered 1,347 wastewater discharges in Xochimilco’s canals between October 1, 2013, and August 5, 2014.

Rosario Iturbe Argüelles, who coordinated the study, says there may be more wastewater discharges in the canals. The study only recorded those from visible pipelines connected to homes.

Contamination in the canals can affect aquatic flora and fauna – and those who rely on the water as a source of sustenance, Zambrano says.

Genoveva Gilbón lives in Barrio Caltongo, a neighborhood with high levels of wastewater in its canals, according to the UNAM study. Some three meters (9 feet) from her house, a dirty canal gives off an odor of sewage.

Gilbón has no running water, so for 8 months, she says, she has been using water from a source close to the polluted canal. One of her four children developed a skin irritation, and she believes contaminated water caused it.

“Now, my child already has many pimples,” she says. 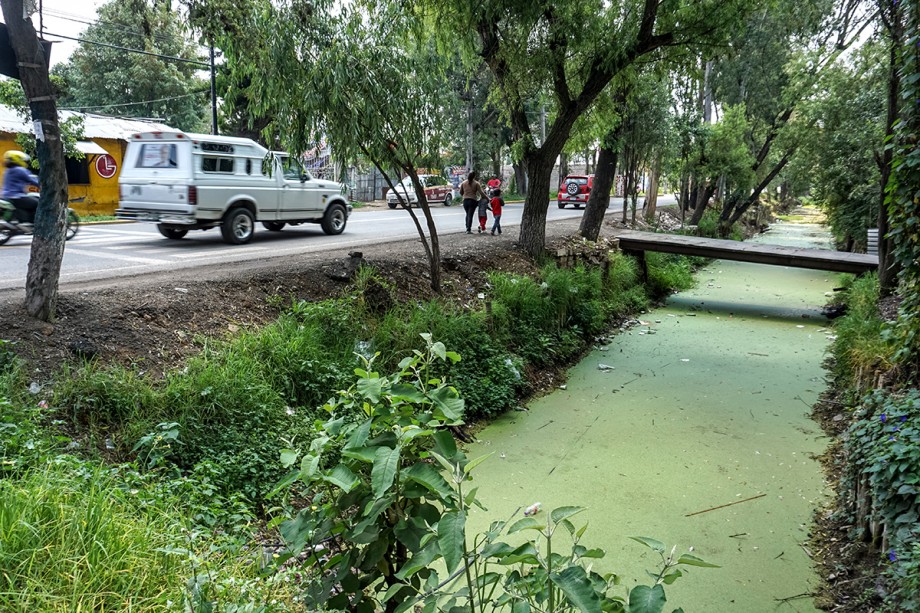 The canals of Barrio Caltongo, a neighborhood in Xochimilco, contain wastewater from small businesses and toilets in nearby homes.

Mirna Vara Aguirre, director of the Jurisdicción Sanitaria Xochimilco, a government institution in charge of public health centers in the borough, admits that contamination in the canals can be dangerous to those who consume the water. But Vara Aguirre says so far, health workers have not treated residents for waterborne illnesses.

The local government is responsible for regulating land use in the borough, while Instituto de Verificación Administrativa del Distrito Federal (Invea), another public institution, places notices on homes that people are building in protected land areas to let them know that they can’t continue constructing. Invea also places notices on existing homes in protected land areas, indicating to residents that they are breaking the law. Costa Ayube says a lack of coordination between these two bodies makes it difficult to end urbanization in Xochimilco.

Invea did not respond to multiple requests from Global Press Journal for comment.

Meanwhile, local environmental advocates are working on projects to rehabilitate the agricultural landscape. Zambrano says Xochimilco’s chinampas were created by the area’s early settlers for subsistence farming. But now, he adds, fewer and fewer people practice the tradition. Zambrano encourages those who still farm on the chinampas to defend their land against urbanization. In addition to working with these farmers, Zambrano is creating biofilters to purify polluted water.

Iturbe Argüelles says she’s worked with Sistema de Aguas de la Ciudad de México (Sacmex), the authority in charge of water services in the capital, to build a pipeline that is bringing treated wastewater from Milpa Alta, another borough, to some of Xochimilco’s contaminated canals. The pipeline, completed in 2016, is helping to improve the quality of the water, she says.