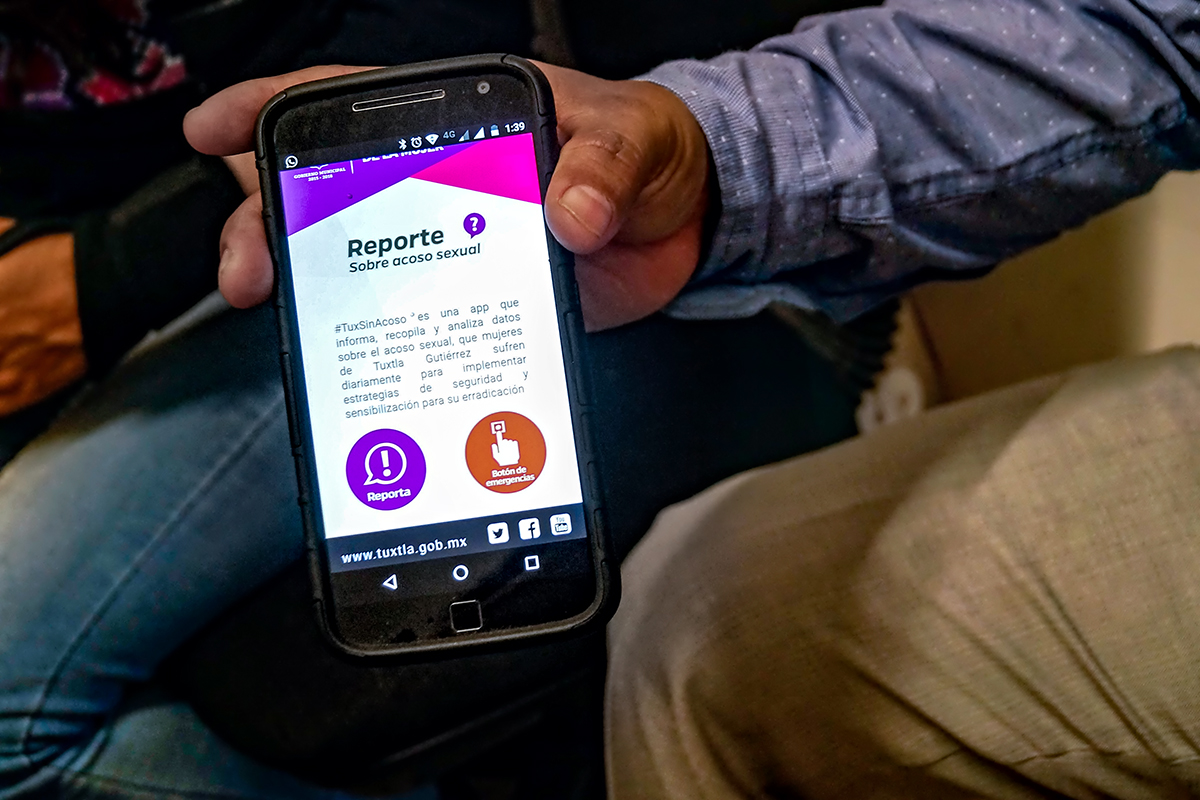 TUXTLA GUTIÉRREZ, MEXICO — Catalina Aguiar Álvarez, 29, is tired of the street harassment that has become commonplace in Tuxtla Gutiérrez, the capital of Chiapas, Mexico’s southernmost state.

She says women here face insecurity on the streets day and night. What begins with catcalling or verbal harassment can escalate quickly.

“Although to some people it seems a minimal issue, I think harassment can go from the minimum to the maximum form of violence,” Aguiar Álvarez says.

In Tuxtla Gutiérrez, 38 percent of women experience a form of violence in public spaces, such as streets, parks or public transportation.

So when she heard about a new app, Tux Sin Acoso, or Tux (a common shorthand for the city name) Without Harassment, which would allow her to report harassment and call the police, she says she downloaded it immediately.

Aguiar Álvarez says she is impressed with the app, which maps complaints and provides that data to authorities. They can then improve conditions, for example by installing additional street lights. The app also has an emergency button that calls police and identifies the user’s exact location.

A few months ago, on the day she installed the application on her phone, she accidentally pressed the emergency button, she says. A few minutes later, police called to make sure she was OK.

“I think that if you are a woman, you know what it is like to walk a few steps and have your heart accelerate because you see a suspicious man on the corner,” she says.

Tux Sin Acoso is part of a wider campaign against harassment on the streets of Tuxtla Gutiérrez that began in 2015, when members of the new state government’s administration took office.

We don’t have the culture of downloading applications for self-care.Gely Pacheco, coordinator of Voces Feministas

In April 2017, local officials submitted a decree proposing heavy fines and potentially jail time for street harassment, which was defined as harassing someone physically or verbally with sexual connotations, in a way that affects someone’s dignity, liberty, integrity or free transit and creates an intimidating, hostile or degrading situation.

And harassment is not illegal in federal law.

In 2015, the Insituto Nacional de Estadística y Geografía (INEGI), reported that three of 10 women have experienced sexual violence here. This prompted local-government action, along with action from other local organizations working to combat street harassment.

The Tux Sin Acoso app was designed by the municipal government and developed by in collaboration with Voces Feministas, a feminist website, and the information systems department of the Coordinación de Tecnologías de la Información y Comunicaciones, the municipal area that coordinates technology and communication in the city of Tuxtla Gutiérrez. Voces Feministas is now studying incoming data from the app.

“We learned the indicators that determine where women experience harassment most, in what neighborhoods,” says Gely Pacheco, coordinator of the website.

“This campaign arises because Tuxtla is a municipality with high rates of harassment in comparison to other cities,” Pacheco says, referring to the statistic that 30 percent of women face violence here.

The app is just one element of the Tux Sin Acoso campaign, Pacheco says. Representatives are giving talks in secondary, preparatory and university classrooms and are utilizing social media to change the culture of street harassment.

So far, the biggest barrier to success is making people aware of the app, she says.

While major social media apps such as Facebook and WhatsApp are popular here, it’s difficult to get new apps to catch on.

“We don’t have the culture of downloading applications for self-care,” Pacheco says.

To date, the app has been downloaded just 115 times on Android phones and 69 times on iPhones.

“The application is very light; it doesn’t take much space on the phone,” Pacheco adds.

Downloading the app makes you part of a community, she says.