Thousands of indigenous people were forced from their homes in Chiapas, Mexico’s southernmost state, in 2017. The displacement was part of a local, violent land dispute that has been going on for years, but similar scenes occur every year throughout the country.

Image at top: Catarina Santiz, 42, sits in her temporary home in the Xiximtontic camp. The structure is made of plastic sheets, sticks and a corrugated roof.

CHALCHIHUITÁN, MEXICO — It’s hot and humid at the Xiximtontic camp, which stretches up from the base of a hill in this rural area. Small dwellings built with logs and corrugated steel push into the hill. Instead of walls, there are black sheets of plastic. The huts do little to protect the people inside them from the weather, especially when the rain comes.

The boys and girls who live here are shy and quiet. Perhaps they do not have the words to explain what happened to them. But here’s what they know for sure: One day a few months ago, when they were still living in their real homes, people began shooting at them. They were afraid.

“There were shots; that’s why we went to the mountains,” says 12-year-old María Angélica Girón Pérez.

They are hungry here in their makeshift camp. At night, they are cold. Their books and toys and other special things were left behind. They are anxious and uncertain.

This particular conflict began on Oct. 18, according to records from the Fray Bartolomé de las Casas Center for Human Rights. An armed group, or perhaps multiple groups, blocked the roads among a number of villages in the Chalchihuitán area, a municipality north of San Cristóbal de las Casas, an urban center in Chiapas, Mexico’s southernmost state. The municipality’s main town is also called Chalchihuitán.

Once the roads were blocked, one man, Samuel Pérez Luna, was shot and killed as he walked to his farming plot, and others in the region realized that they needed to leave immediately. Then, bullets began to fly throughout the area. There was no time for people to gather their belongings. They ran from the sound of gunshots, scattering into nearby highlands. 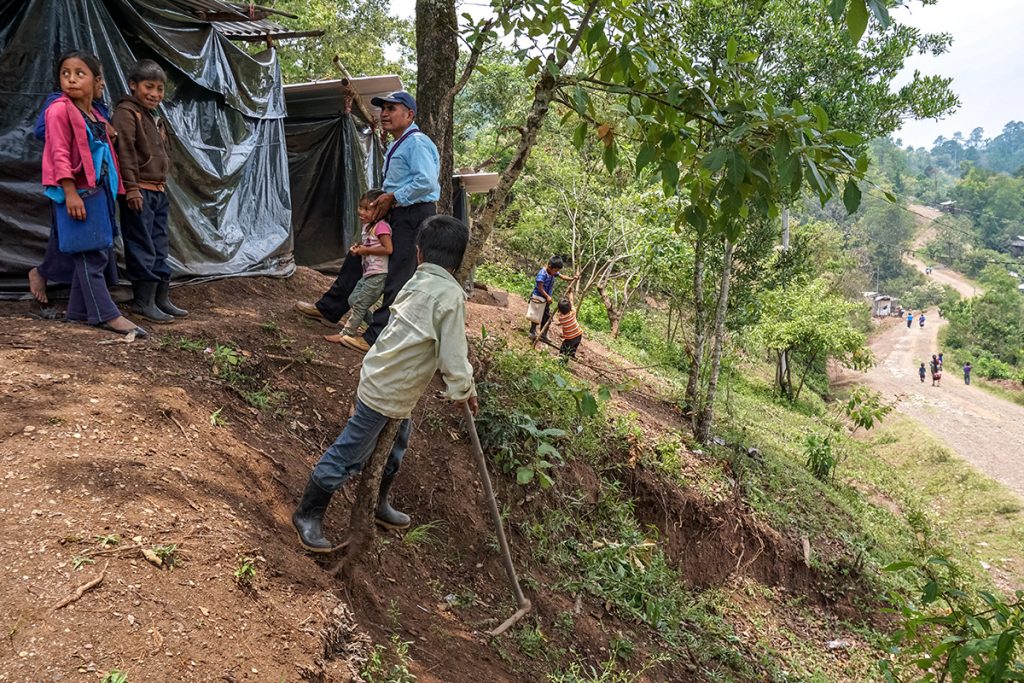 In October 2017, residents of Chalchihuitán created the Xiximtontic camp, a temporary settlement, after armed groups forced thousands from their villages.

This is one recent example of a form of displacement that has happened over and over again in southern Mexico, as the region convulses amid long-simmering disputes involving land rights, indigenous autonomy and the military-like Zapatista movement, an armed group of mostly indigenous people that once declared war on the Mexican government.

No matter the reason, the families who are pushed from their homes experience one of the cruelest forms of persecution, says Pedro Faro, director of Fray Bartolomé de las Casas, a Chiapas-based nonprofit that monitors human rights violations, especially against indigenous people.

“Their own life story, the place where they were born, that they built, their goods, their photographs, their symbolic issues referring to a life story – well, from one day to the next, they are erased,” he says.

The origins of the violence in Chalchihuitán go back decades.

Tensions rose again beginning in 1994, when the Zapatista movement declared war on the Mexican government and claimed land throughout Chiapas. The group still controls certain “autonomous zones,” even though the Mexican government has never ceded these. Both Chalchihuitán and Chenalhó are in one such autonomous zone. Many people in the area actively support the Zapatista movement.

Paramilitary groups, often made up of people who oppose the Zapatistas, are active, too.

Vanda Felbab-Brown, a senior fellow at the Brookings Institution, a U.S. think tank, specializes in research on Chiapas. She says the Mexican government has a history of using paramilitary groups in Chiapas to combat the Zapatista movement.

More than 5,000 people were pushed from their homes in Chiapas, Mexico in October of 2017. Their hometowns are so rural that many of them don’t appear on widely-used maps. Global Press Journal identified many of those villages using satellite imagery, which was confirmed by people who live and work in the area.

Most of the paramilitaries seem to come from the Chenalhó area, she adds. Some of them focus specifically on meting out violence against people thought to support the Zapatistas. Others are hired by wealthy landowners to protect property. Still other paramilitary groups support indigenous interests, she says.

The groups are made up largely of young, landless men who struggle to find jobs, Felbab-Brown says.

“The Mexican military went around, with the support of the Chiapas government, and looked for young, dissatisfied men in rival communities and asked them to fight against the Zapatistas or against communities that support the Zapatistas,” she says.

The conflict behind the recent displacement is less driven by anti-Zapatista ideology than by a desire to reclaim the land that each side believes belongs to it, she says, but that doesn’t rule out the possibility that some of the aggressors were previously engaged in government-supported efforts to root out the Zapatistas.

Clashes between the paramilitary groups and presumed Zapatista sympathizers have been deadly. In 1997, 45 Tsotsil people in the village of Acteal who were thought to support the Zapatistas were brutally killed in what is now known as the Acteal Massacre. That conflict was between the two groups from Chalchihuitán and Chenalhó, Felbab-Brown says.

The destruction in Chalchihuitán in 2017 came just before the 20-year anniversary of that massacre. And in December, in a reminder that land is at the heart of the conflict between Chalchihuitán and Chenalhó, an agrarian tribunal confirmed that a disputed swath of land belongs to Chenalhó.

By that time, the thousands of people who now live in the Xiximtontic camp had been pushed out of their homes (Xiximtontic means “small stones” in the Tsotsil language). Eleven people reportedly died of hunger and cold during those first days and weeks of displacement, including two infants, a baby not yet 2 years old and a toddler not yet 3. 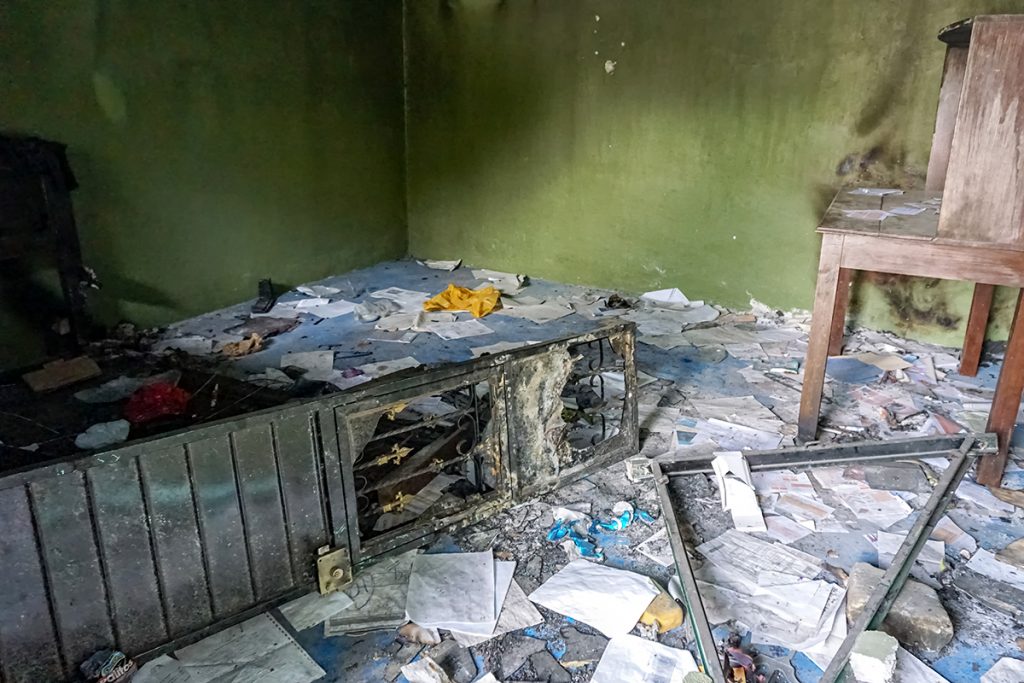 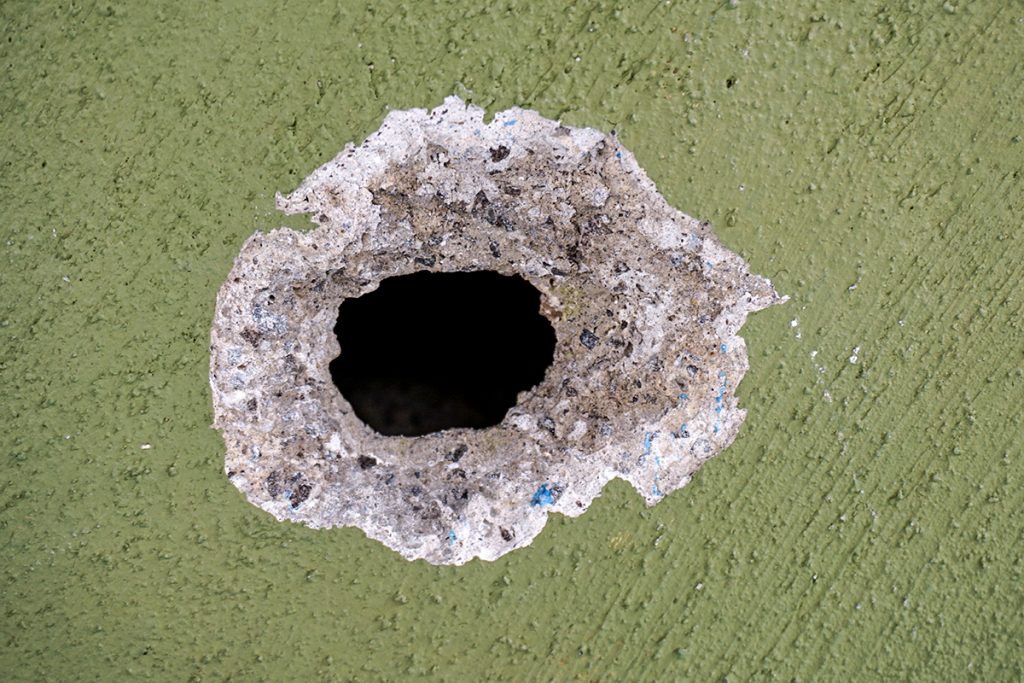 This home in the Chalchihuitán area was ransacked by armed paramilitary groups that pushed more than 5,000 people from a number of villages.

In December, a 17-year-old died after ingesting paraquat, a toxic herbicide, according to records kept by local medical offices.

These are people who had very little to begin with. The vast majority of the nearly 17,000 living in Chalchihuitán in 2015 were Tsotsil, a community who are more likely than Mexicans of European descent to live in poverty. In that year, the most recent for which data is readily available, just under 80 percent of the people in Chalchihuitán lived in conditions of extreme poverty, according to Mexican government data.

The people in Chenalhó are in the same situation, with nearly 80 percent living in extreme poverty. For them, as for those in Chalchihuitán, land is everything, and the dispute is hardly one-sided.

Roberto Paciencia Cruz, who lives in Chenalhó, says his family dates the conflict back to the early 1980s, if not even before then. Things got worse in the 1990s, he says.

“Since ’94, I saw with my eyes that the paramilitaries were put in place by the government, and it bought arms to give to them,” he says.

Paciencia says the land dispute was revived when people from his community began to creep across the boundary line and try to claim land, while the people of Chalchihuitán did the same.

Even today, he says, both sides are armed. It’s normal to hear gunshots in each community.

There have been more deaths. On April 2, three people – a father and his two sons, ages 17 and 11 – were shot in the early morning hours as they walked to nearby fields to plant corn near the coffee and banana plantations in the town of Aldama in the Chalchihuitán area, according to reports to local human rights organizations.

Those deaths came just weeks after more than 700 people were pushed from their homes in that same area, according to records kept by Fray Bartolomé de las Casas. Random gunfire had become commonplace. No one could predict when bullets would fly.

“[My children] sometimes say that they don’t want to go to school anymore, because they are scared of the bullets they have to cross in front of – it is quite dangerous,” says Claudia Lina Pérez García, who left her home in Aldama with her four children but returned, hoping for stability. “Before, we were happy walking to the field, without fear of anything.”

Now, she says, “we can’t even go around the corner.” 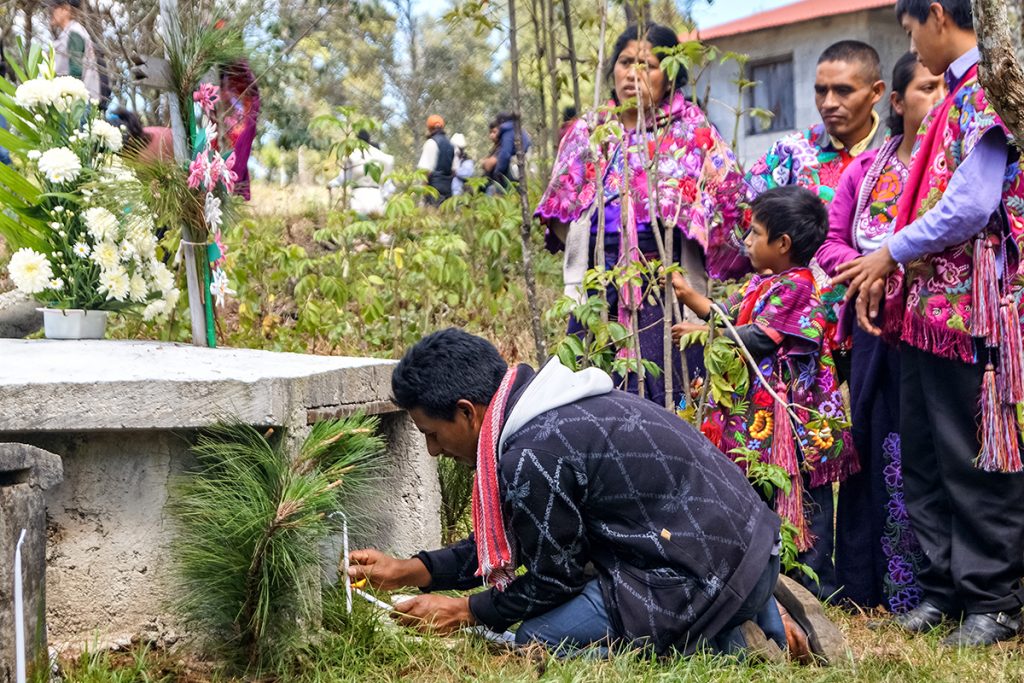 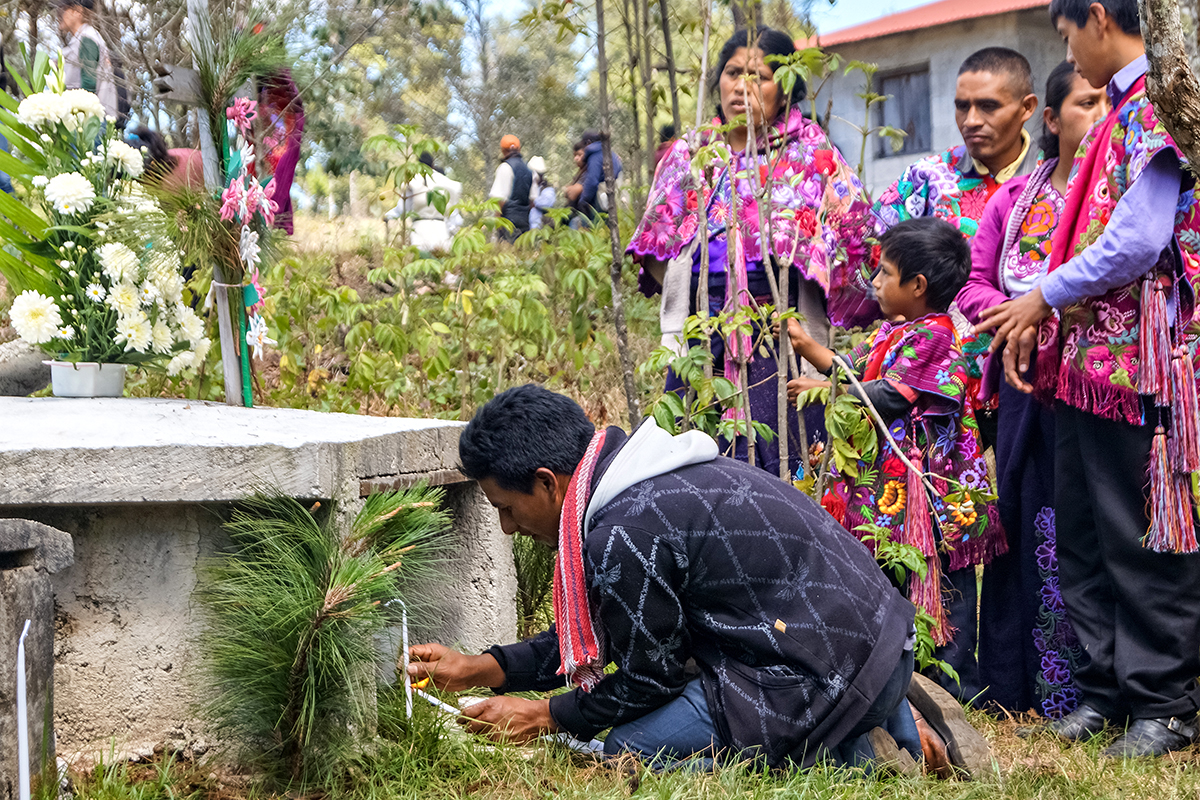 Lorenzo López Luna kneels in front of the grave where his daughter, Antonia López Girón, is buried. The 11-year-old girl died in San Cristobal de las Casas after being forcibly displaced from her home.

It’s a sign, the people from Chalchihuitán say, that it’s not safe to return to their town.

This sort of forced displacement is a problem throughout Mexico. In 2017 alone, there were 25 known incidents of displacement, affecting 20,390 people in the country, according to records kept by the Comisión Mexicana de Defensa y Promoción de los Derechos Humanos, Mexico’s human rights commission.

The commission estimates that at least 329,917 people were forcibly displaced between 2006 and 2017. In 2017, just under 30 percent of all forcible displacements in Mexico occurred in Chiapas.

In that state, displacements often occur because of local armed conflicts, Faro says. He says his organization counted 10,000 people who were forcibly displaced in Los Altos and Zona Norte – the central highlands and the northern zone of Chiapas – in conflicts since 1995, the year after the Zapatistas declared war on Mexico.

There’s reason to believe that the actual number of people forcibly displaced is much higher than the number recorded, Faro says.

“This is not a precise number or a complete documentation,” he says. “There are other numbers from other organizations that may be possible, like from 30,000 to 60,000 displaced persons in Chiapas.”

Children suffer greatly when they are displaced, Faro says.

“It’s a situation of psychological impact, the impact of war,” he says. “They can’t totally explain what is happening, but they are scared and terrified.”

Of the more than 5,000 people displaced from Chalchihuitán, about 2,500 are children, says Paulo Villalobos, a youth coordinator at for Melel Xojobal, a human rights advocacy organization based in Chiapas.

In total, there are at least 3,500 children displaced in Chiapas, according to records maintained by Melel Xojobal. 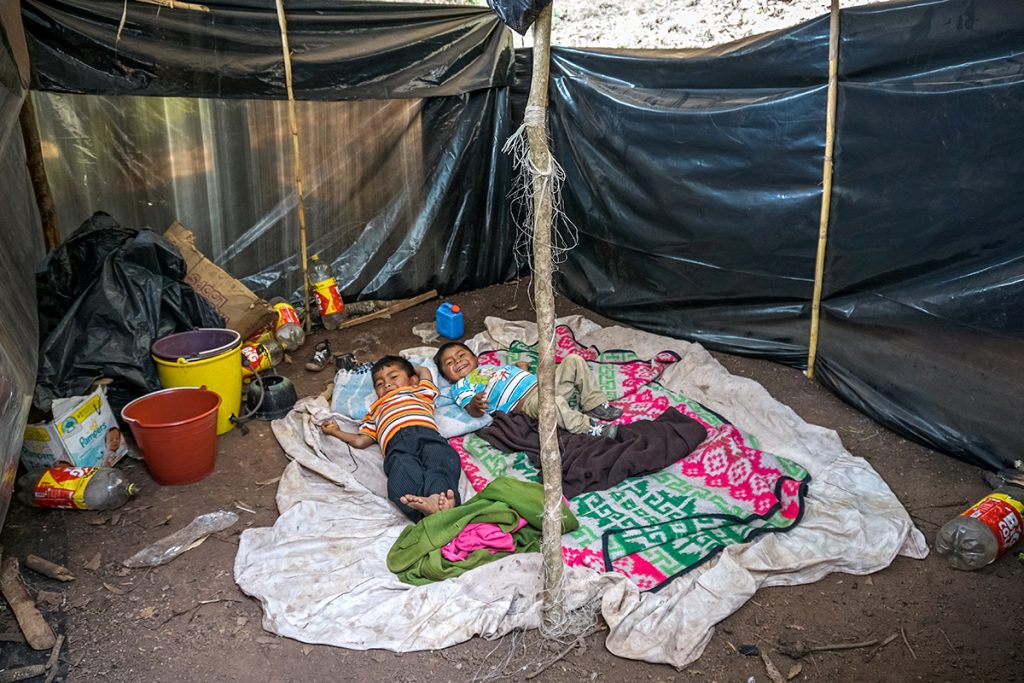 Nicodemus, 4, and Esmerlin, 3, relax in their temporary home in the Xiximtontic camp. They live with their grandmother, Catarina Santiz.

For displaced children, the grief of having lost their homes is stark, Villalobos says.

“They had their toys, their tools, they had clothes, some had a bicycle, they had their barbecue and machete for household chores, their dogs, their cats – they are losses that have to be made visible,” Villalobos says.

María Teresa Pérez Girón, a 6-year-old girl who lives in Xiximtontic camp with others who left the Chalchihuitán area, says no one in her family stopped to collect anything from their home before they ran.

“We are quite scared, because we were left to live in the mountains, and what I need are my shoes, my toys – everything I had was left in my home,” she says. “The little that we had stayed at the house. We left without clothes.”

That agony, for some families, is enough to push them back home, despite the risks. Of the people who fled Chalchihuitán in 2017, more than half returned in January. But once home, they found conditions untenable, Faro says.

The adults don’t go to work. The children can’t get to school.

Whenever they open their doors, the bullets fly.