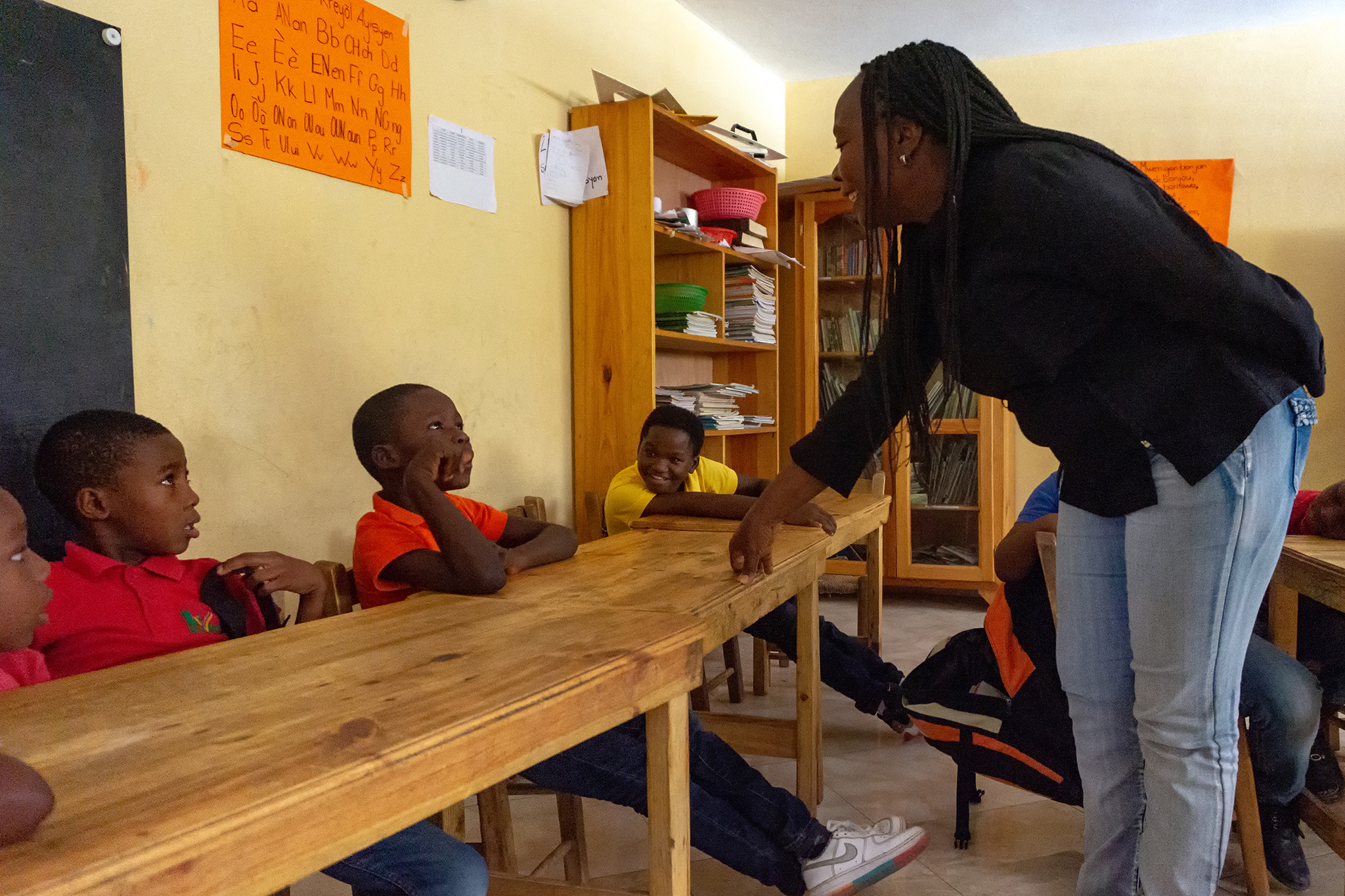 PORT-AU-PRINCE, HAITI — It’s 10 a.m. and students at Liv Ouvè school are heading back to class after recess.

In their classroom, small chairs are arranged around tiny tables. The classroom is well stocked with supplies and it’s well ventilated too.

Sonia Secours Jean has been a first and second grade teacher here since December 2018.

Teaching here is different than most schools in Haiti, she says.

Across the country, schools typically offer instruction in French, but that creates challenges for Haitian children who speak Haitian Creole at home.

In her previous teaching experience, she says children often have frustrations when trying to learn grammar, verb conjugations and other challenging topics in French that aren’t the same in Haitian Creole.

“Learning in French can make them feel lost,” she says. In past teaching roles, she says students “had a penchant for crying instead of explaining it to the teacher, because there was a barrier between them and the French language imposed on schools.”

But instruction at Liv Ouvè is different.

“Since I joined Liv Ouvè, children keep their attention focused, and there’s no barrier between them and the teacher. And when they feel there’s something wrong, they explain it to me instead of crying. It seems that children have freed themselves from any worries, and are free to learn,” Secours Jean says.

The barrier between French and Haitian Creole speakers has long divided society.

Pierre Michel Chéry, a computer scientist, has written five novels and other articles in Haitian Creole. He’s also a part of the Haitian Creole Academy.

“The Creole Academy’s role is to raise people’s awareness of the need to value their mother tongue again,” he says. “We want to institutionalize the Creole language across the country, laying down principles for teachers for them to be able to live up to the standards of the Academy.”

Along with other members of the Academy, Chéry is working to encourage wide sectors of the population, from parents to university students, to speak Haitian Creole. It’s about protecting the identity of Haitians, he says.

So far, he says, the reception has been mixed.

“Some parents and teachers have already begun to get on board while others continue to pose questions,” he says. “But, we’re confident that this new move will help Haitians find their own identity, and fight for its preservation.”

Claude Calixte, the head of Liv Ouvè, says the school has been a Haitian Creole school since it opened in September 2015.

“I studied in France, and I’ve never seen small French children taught in a language other than their mother tongue. And when I got back home, I felt the need to put in place a new education system,” he says.

In the 1970s, many schools taught in Haitian Creole. But starting in 1982, political upheaval led to many changes in policies and government officials. Slowly, French became the language of education.

Now, the number of schools teaching in Haitian Creole, including Liv Ouvè, is on the rise again. And the Academy, which advocates for wide use of the language, hopes that number will continue to grow.

There is evidence to show that children are often not successful in school when they only learn in French, Calixte says.

“Often, a child does not have a good command of French even after 14 years of formal education. The reason for this is simple: only 10% of parents in Haiti speak French with their kids every day,” he says, acknowledging that’s his own estimate. “I firmly believe that with this new approach, children will be able to learn well and will no longer face any language barrier.”

“Since we started our awareness and training sessions, we’ve realized that people had a thirst for Creole knowledge. It seems like they hadn’t the guts to say it. But as we keep reaching out to them, they take time to listen to us,” Beaucicault says.

He hopes policy makers, NGO workers and educators will begin to embrace Haitian Creole too. He says they will continue to work to erode the stigma that children educated in Creole will be less successful, overall.