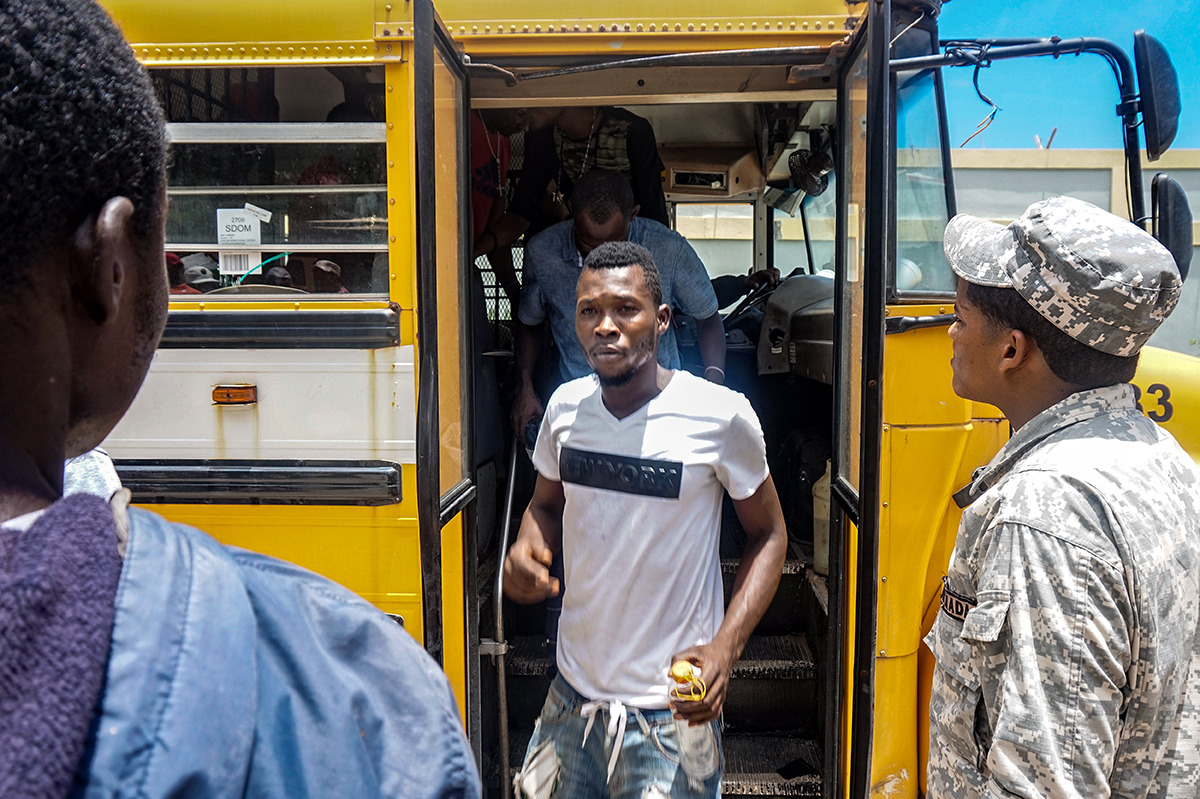 BELLADÈRE, HAITI — As the sun blazes overhead, Paul Emice Saint Juste is escorted toward a yellow school bus conspicuously parked behind one of the many border crossings between Haiti and the Dominican Republic.

He was one of dozens of Haitians arrested on a recent evening in the Dominican Republic, in an immigration raid that he calls “a witch hunt.”

Belladére, in central Haiti, borders the Dominican Republic’s city of Elías Piña. It’s a popular crossing point and, these days, a hub for deportations.

He left his wife and three kids “in hopes of earning money to help his family survive.”

And for a while, things weren’t so bad – or at least they were better than they were in Haiti.

“I had landed a job in a tomato processing company, which had me earning 300 [Haitian] gourdes a day – an amount which is worth less than a paltry $4,” he says, adding that the company employed more than 2,000 Haitians.

Even that was better than what he was earning in his home country, where he couldn’t find a job at all.

“With my pay, I could afford to send my kids to school, a luxury I could hardly afford while in Haiti,” he says. “The chances of landing a job in Haiti have dwindled greatly.”

Decades of political turmoil and an onslaught of natural disasters have pushed millions of Haitians to leave the country in search of work and a better life.

“If our country were able to make jobs available, we wouldn’t leave and submit to this kind of humiliation,” he says.

Since Haiti and the Dominican Republic are two parts of the same island – “like two wings of the same bird,” Juste says – crossing that border is the most feasible option for many Haitians.

But, owing in part to Haiti’s devastating 2010 earthquake and ongoing political chaos, the flow of immigrants into the Dominican Republic during the last 10 years has become “invasive,” according to a 2017 report from the Organisation for Economic Co-operation and Development.

“In no country on Earth is illegal immigration tolerated. Anyone crossing the border into a nation other than their own needs to have a passport and visa. And yet, Haitians have got into the habit of illegally immigrating in an attempt to land jobs,” Supplice says.

In 2016, the World Bank noted that Haitians often take jobs that locals do not, such as low-paying jobs in agriculture, construction, tourism and other service professions.

In 2018, more than 200,000 Haitians needed to renew or obtain residency permits, and the Dominican Republic gave them an extension until August to apply. Now that the deadline has passed, officials are enforcing deportations, says Géralda Sainville, communications manager for Groupe d’Appui aux Rapatriés et Réfugiés, a support group for refugees and returnees.

Advocates are bracing for more deportations, they say.

“There is a need for empathy on both sides,” Sainville says. “As part of advocacy efforts, we organize workshops to reflect on how the two governments can strike a deal to seek a solution to the situation.”

She says they have already seen an increase in deportations in recent months since the August deadline passed.

Many Haitians attempting to stay in the Dominican Republic say that arrests are harsh and that jobs are harder to come by.

Miguel Angel was employed in the construction industry until he was arrested and deported recently.

“They confiscated my documents, arrested me and dropped me off at Belladére,” he says, adding that he has been in the Dominican Republic for as long as he can remember. He’s made a family there.

“I know nothing about Haiti,” he says. “And I was deported, leaving my entire family behind.”

Chednerson Saint Firmin, a Haitian sociologist and teacher, says it’s time that Haiti invested in its own job market.

“The fix lies not in stopping people from crossing the border, but in creating comfortable living conditions, helping Haitians live a peaceful live in their homeland, and creating jobs for the most vulnerable in our society,” he says.