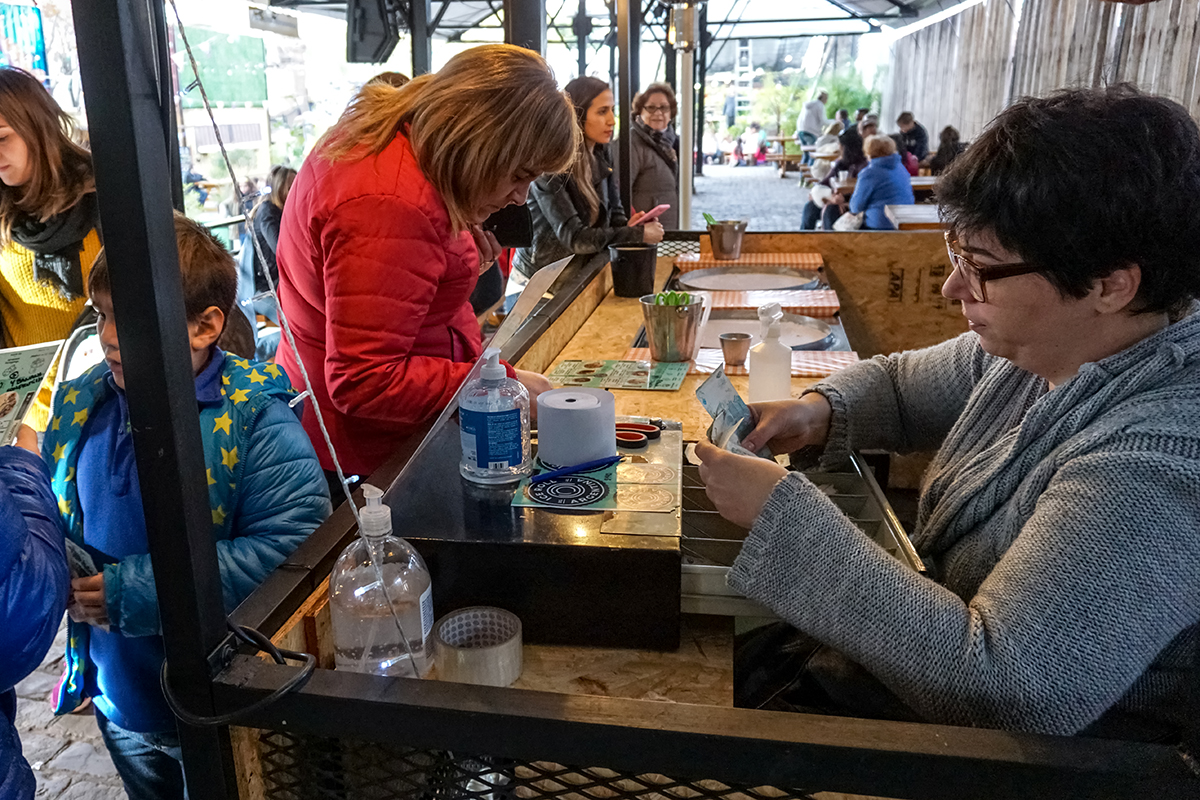 BUENOS AIRES, ARGENTINA — Florencia Zuvi pours cream onto a chilled plate, then mixes in a chopped muffin. Next, she spreads the mixture smoothly over the plate and freezes it. Once the mixture is frozen, she carefully curls the confection off the plate with a spatula, creating small rolls of ice cream. She decorates the arrangement with chocolate sauce.

The result is a work of art.

“I used to be a secretary, and I hated my job,” Zuvi, 31, says. Along with her brother, Iván Zuvi, 26, she founded Ice Roll Argentina, a dessert business. The Zuvis operate the business from a stand that they set up at food fairs and markets around the city. During a recent day at work, Florencia Zuvi bustled between Ice Roll’s register and the kitchen.

She wasn’t the only entrepreneur working at the fair that day.

During a lull, Lucía Sigüenza, 23, and Gastón Rodríguez, 27, approached Ice Roll Argentina and proposed making a video game to promote the brand. Their business venture is Baam! Studio, which makes advergames – video games that promote brands within the game itself. Florencia Zuvi loved the idea. 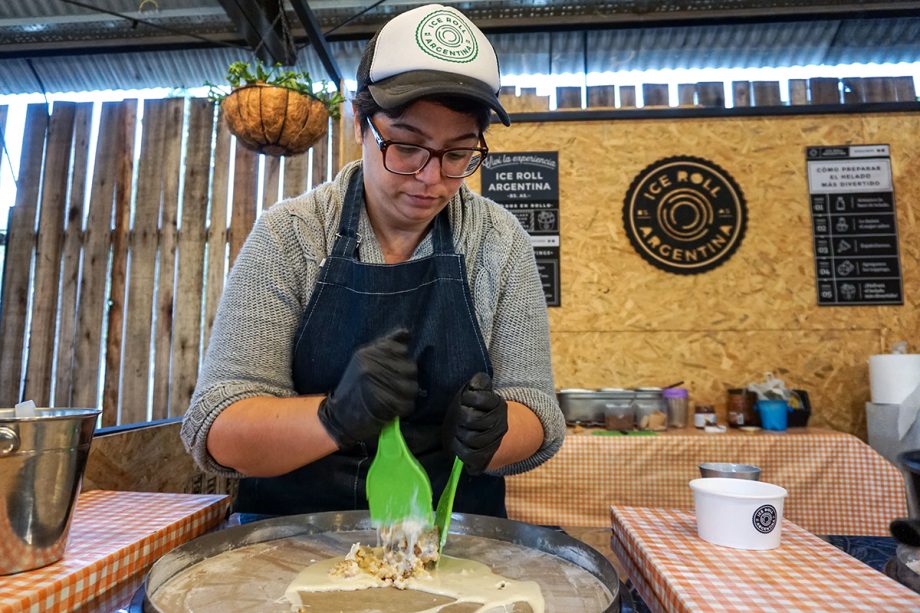 Florencia Zuvi, one of the founders of Ice Roll Argentina, mixes a dessert at her stand at Patio de los Lecheros, a market in Buenos Aires. Ice Roll conducts business at fairs and markets around the city. Zuvi hopes to work on increasing brand exposure, so the business can be open in a consistent storefront all week.

Sigüenza, who finished her audiovisual design studies in 2017, says she has been unable to gain necessary experience because she hasn’t been able to get a job in her field.

“It happens to everyone. My friends didn’t get a job in what they studied either. It’s very difficult,” she says.

“I got tired of the work being offered in publicity companies as a trainee from 8 [a.m.] to 7 [p.m.], without pay,” Rodríguez says.

These Argentines struggled to find stable employment, so they struck out on their own to create business ventures. But young entrepreneurs also confront unexpected financial, legal and administrative challenges when starting and running a company.

In Argentina, unemployment among people between the ages of 18 and 24 was 24.6 percent in 2016, according to a study by the Adecco Group, a human-resources consulting company that surveyed 20,646 young persons in Argentina in May 2017. The percentage is above average for Latin America and the Caribbean, where youth unemployment is 19.5 percent, according to the Organización Internacional del Trabajo, an international labor organization.

For Alexandra Manera, director of human resources for Argentina and Uruguay at Adecco Group, the unemployment problem is due to lack of coordination between the labor market and the education system.

“Teaching methodologies are not updated for what the market needs, and the economic environment of instability makes the companies not want to take more employees,” Manera says.

In Argentina, unemployment among people between the ages of 18 and 24 was 24.6 percent in 2016, according to a study by the Adecco Group.

She adds that the market is looking for information-technology (IT) and engineering employees. Companies also desire employees with soft skills such as communication and teamwork, but not all schools and universities are teaching such skills.

Fabián Pereyra, director of the Dirección General de Políticas de Juventud, the youth-policies department for the government of Buenos Aires, says that young people are not considering market needs when they choose what to study.

Pereyra agrees that the IT and engineering sectors are hiring many workers, as are culinary arts and languages. However, he says, young people in Argentina continue to study law and medicine, or social sciences such as sociology and psychology. The market, Pereyra continues, is saturated with graduates in those fields, and competition is fierce.

Manera says entrepreneurship is a response to young people not getting jobs in their fields of study.

“Today, young people are more independent, and they begin to think about entrepreneurship issues when they see limited access to the job market,” Manera says.

But not all ventures work. Pereyra says eight out of every 10 projects fail because “they don’t have a business plan, a marketing plan or the necessary tools to make their enterprise sustainable.”

In response, the city government’s Dirección General de Políticas de Juventud hosts entrepreneurship contests. The winners get money, as well as mentorship, to start or expand their businesses, Pereyra says. Prizes range from 80,000 Argentinian pesos ($3,053) to 150,000 pesos ($5,725). Judges from fields such as technology, new media and fashion select the winners. 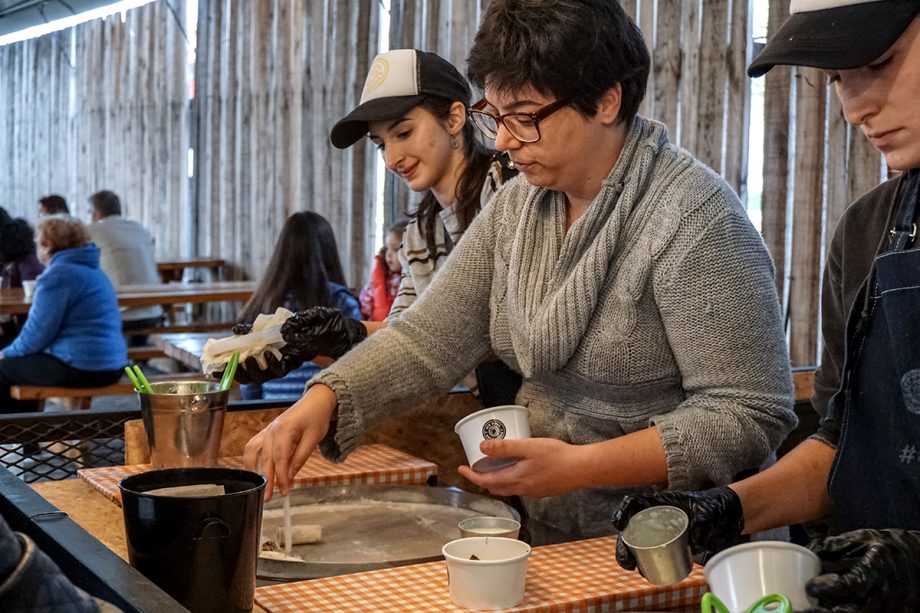 In 2017, Florencia Zuvi and her brother won the government contest for entrepreneurs to start Ice Roll Argentina. She received mentorship in developing a business model and marketing plan, as well as 150,000 pesos ($5,725).

“The machinery was expensive to start the project; we needed financing. When we won, we got the capital we needed to start. The program helped us a lot to believe in the project,” Florencia Zuvi says.

For Florencia Zuvi, as well as for Sigüenza, the legal and administrative aspects were the most difficult parts of starting their own businesses.

The tasks associated with starting a business in Argentina can mount quickly, from verifying the name of the company and certifying the signatures of partners, to registering with the city’s Registro Público de Comercio, the register of commerce, which can involve pages of complex documentation and thousands of pesos.

Florencia Zuvi says she expected a financial challenge, but she did not expect that the legal and administrative issues would be so difficult. Sigüenza agrees, and she adds that an accountant would help with the complex financial paperwork.

But as for hiring one, Sigüenza says, “We can’t do it at the moment.”

Sigüenza says Baam! Studio could benefit from a mentor to help the business be better organized and develop a marketing strategy.

Florencia Zuvi, on the other hand, believes that the most important thing now is increasing brand exposure, so they can open a shop in a market, shopping mall or area where the business can be open all week. Right now, Ice Roll Argentina only operates at fairs and markets, usually on the weekend.