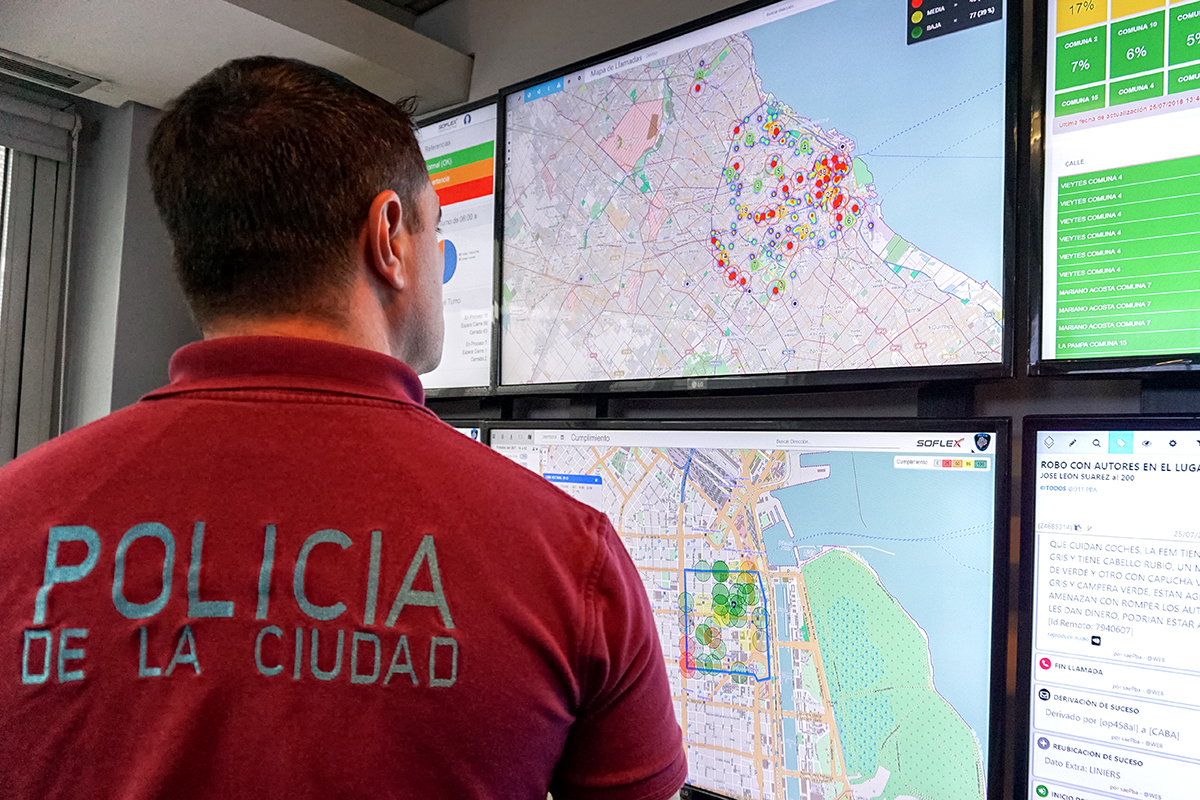 BUENOS AIRES, ARGENTINA — A map showing police patrol routes pops up on a television screen on the wall. Next to it, another monitor displays recent crime statistics. A third screen blinks with incoming emergency calls and text messages.

A look inside this busy Buenos Aires police station tells the story of law enforcement’s evolving approach to preventing, responding to, and solving crimes in the capital. Since 2017, Policía de la Ciudad de Buenos Aires, the police force operating in the country’s capital, has been using this collage of screens to improve the way the force works.

Aníbal Falivene, who heads the operational security office of the city government, says each data visualization is part of a real-time crime map. His office designs crime prevention strategies. Embracing this technological tool, which was developed by Ministerio de Justicia y Seguridad de la Ciudad de Buenos Aires, the city’s ministry of justice and security, has many benefits, he says.

“This gives you objective information to distribute resources, plan a strategy in the field, verify that it is accomplished and avoid incorrect or fraudulent administration of resources — something that police officers have frequently been accused of,” he says as he zooms in on a point on the map.

Since its launch, authorities say, the map has allowed the police force to assign more officers to work where crime is most common. While police officers feel more equipped to do their work, locals in some parts of the capital say they have not noticed an increase in police presence and they’re paying the price — crime is on the rise.

Falivene says there are two versions of the crime map available — one for internal use and another that residents can use online. While the first provides real-time updates, the latter is only updated every six months.

Between 2016 and 2017, the number of homicides and robberies fell by 2.72 percent and 4.11 percent, respectively, according to city government data. Despite the decline in these crimes, the city of Buenos Aires continues to have the highest rate of theft in the country.

Thanks to data that they’ve collected from the map, city authorities implemented a public safety program in July that aims to increase the number of police officers on the street and to shorten the distances between residents and police stations.

Marcelo D’Alessandro, secretary for security for the city’s police force, says that the map is key to achieving this goal.

From an economic standpoint, this program promotes transparency and accountability, he says. By identifying areas of the city where more officers are needed, the police force can allocate personnel and resources more efficiently while thinking through which methods are most effective for preventing certain crimes.

“Sometimes, there are measures with equal results that have a different budgetary impact,” Falivene says. “The objective is to spend less [while] providing the same level of service.”

But residents across the city are challenging this notion. Alejandra Sánchez, an employee at a hardware store in Caballito, a Buenos Aires neighborhood, says it’s getting more and more dangerous to work in the area. Caballito had the second-highest number of violent robberies in December 2017, according to the crime map.

Since the robberies started, Sánchez has been keeping her cellphone hidden.

“Last week, I saw how they were stealing a cellphone from a guy at the store’s door. I no longer use my cellphone on the bus,” Sánchez explains. “If I see that I’m being called, I let it ring, and right when I get home, I check who called me.”

Ana Laura Da Silva Olivera, who works at a clothing store nearby and has used the crime map, says there are few police in Caballito.

“Two years ago, we had a police officer on the block. Now we don’t, and a couple months back we went through various robberies on the block,” says Da Silva Olivera, who was assaulted by armed robbers early this year. To stay safe, she keeps the door of her shop locked for most of the day, she says.

As the police force shifts its attention and resources to parts of the city with high levels of crime, the number of officers in Caballito, a neighborhood that Da Silva Olivera says was once safe, is quickly decreasing.

Police are more visible in the city center, where most government buildings and tourist attractions are found, Da Silva Olivera says.

“The rest of the city also exists,” she adds.

Falivene points out that, while the force can’t afford to put a police officer on every corner, focusing on specific areas allows them to free up resources to prevent crime in other parts of the city.