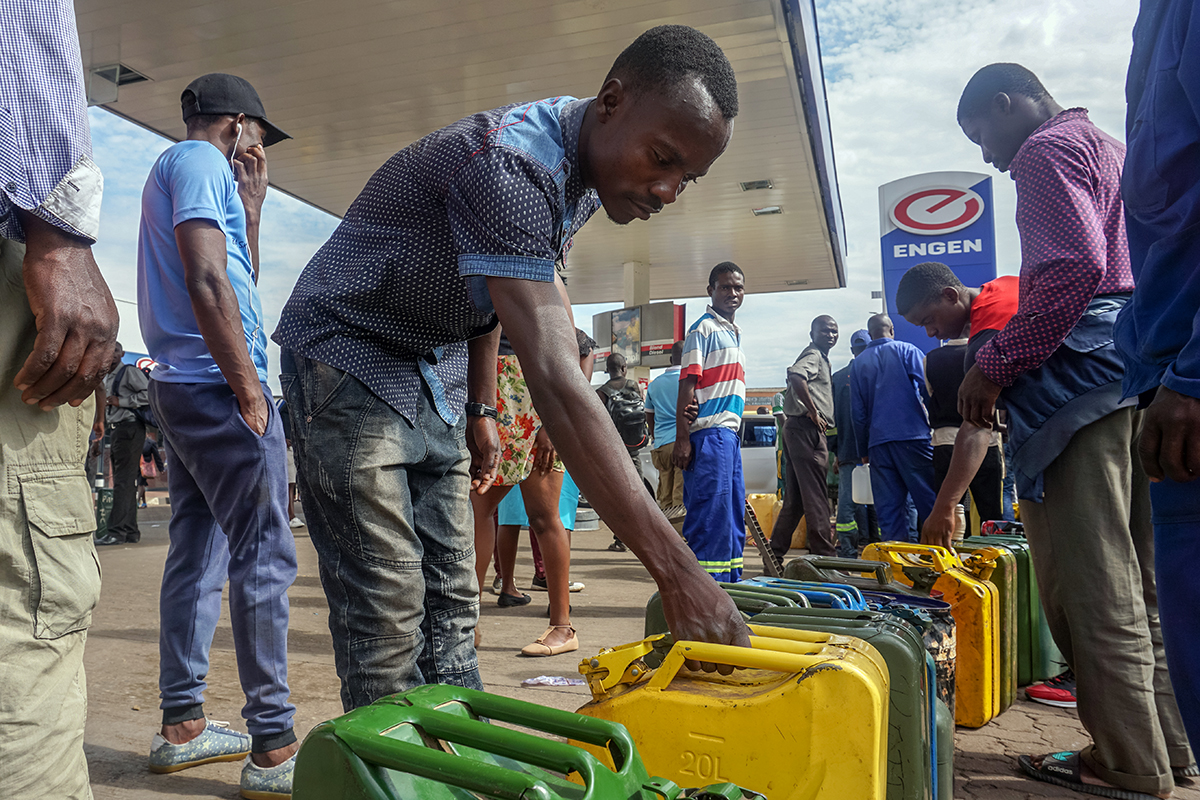 HARARE, ZIMBABWE — It’s been days since a wave of protests led to violence across this capital city and throughout the country. Security forces have attempted to tamp down the protests, killing at least five people and wounding 25 more in the process, according to an update published Wednesday by Human Rights Watch. Internet services were shut down for more than 72 hours in most of the country.

The protests were sparked by high gas prices, which hit $3.31 per liter after an announcement by Pres. Emmerson Mnangagwa of the new rate. That’s far higher than the global average of $1.09 per liter.

But local experts say the uprising has little to do with fuel prices.

“We are a broken country,” says Godfrey Kanyenze, an economist at the Research Institute of Zimbabwe. “We are polarized. Zimbabwe is not a cohesive unit. We are broken.”

Zimbabwe has had a volatile economy for years. Steve Hanke, an economist who tracks inflation, says Zimbabwe’s annual inflation rate is 236 percent. It’s not the highest inflation rate in the world – Venezuela’s implied annual rate hit 162,000 percent this month, according to Hanke’s estimates – but it is among the highest.

We are a broken country. We are polarized. Zimbabwe is not a cohesive unit. We are broken.Godfrey Kanyenze, an economist at the Research Institute of Zimbabwe

The situation in Zimbabwe worsened in October, when the government denominated all the U.S. dollars in bank accounts as RTGS, a pseudo currency that, though said to be valued the same as the U.S. dollar, was worth much less. These days, ATMs spit out bond notes, which swing wildly in value. This week, they were worth about 29 cents.

“In a short period of time, we have seen people’s earnings being eroded as the currency has been rendered meaningless and can no longer play its role as money,” Kanyenze says.

Across the board, prices in Zimbabwe are high. A 2-liter bottle of cooking oil, which would have cost $3 last year, now costs between $8 and $15. The price of a loaf of bread has doubled from $1 to as much as $2.

The current protests are tied to a yearslong upheaval, says Tabani Moyo, spokesperson for the Crisis in Zimbabwe Coalition.

Doctors and teachers have taken to the streets in recent weeks to protest a lack of resources and poor pay. Those problems have persisted for decades.

“What is clear is that Zimbabweans have built up a lot of anger over the years,” Moyo says.

Many Zimbabweans were hopeful in late 2017, when longtime President Robert Mugabe, who was accused of corruption and human rights abuses, was pushed from office by Emmerson Mnangagwa, who is now president. Even though Mnangagwa had for decades been a key figure in Mugabe’s administration, some Zimbabweans felt the change might bring stability. Mnangagwa famously declared Zimbabwe “open for business” shortly after he took power.

None of that happened, and Zimbabweans are not happy, says Malcom Mwanga, who owns a small shop that sells sugar, rice, soap and other staples. This week, the shop opened and closed depending on whether soldiers were in the area, as Mwanga tried to earn a living while also avoiding violence. The government has betrayed the people’s trust, he says.

“It has failed to deliver economic changes in the short term,” Mwanga says.