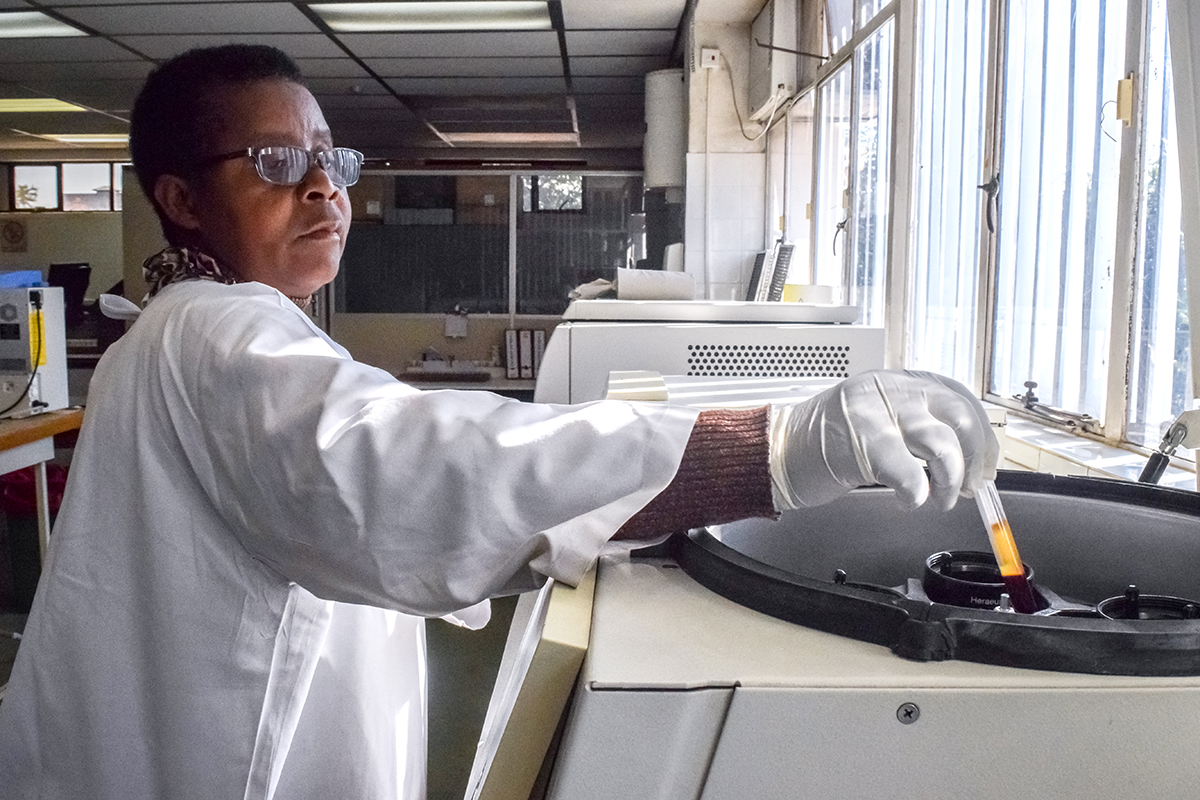 HARARE, ZIMBABWE — When Victor Chinake donates blood at a local clinic, he is relieved to see that his contribution is nearly a full pint.

Another life, he hopes, will be saved. He doesn’t expect payment in return for his donation, and he doesn’t get one. He just knows that his blood is something that someone else might need, he says.

Despite donors such as Chinake, Zimbabweans throughout the nation with health issues or injuries have been told that blood is not available, even though health officials say there is no shortage of blood. The problem isn’t whether donors like Chinake have contributed enough – it’s whether patients who need blood transfusions can afford them.

In Zimbabwe, blood is never free. Getting it on credit is the best most people can hope for, and that option is reserved for the direst cases. A single unit costs $100 at government hospitals and clinics; it costs $120 at private facilities.

The rule for patients at hospitals and health clinics is simple: No money, no blood.

There’s just one way to avoid paying the fee: Donate blood, and lots of it. People who have donated at least 10 times in the previous 12 months, or who have donated at least 25 times in total, can get blood products for free. Someone who made at least 10 donations but stopped due to medical reasons or someone under the age of 21 who is a regular donor can also have the fee waived. 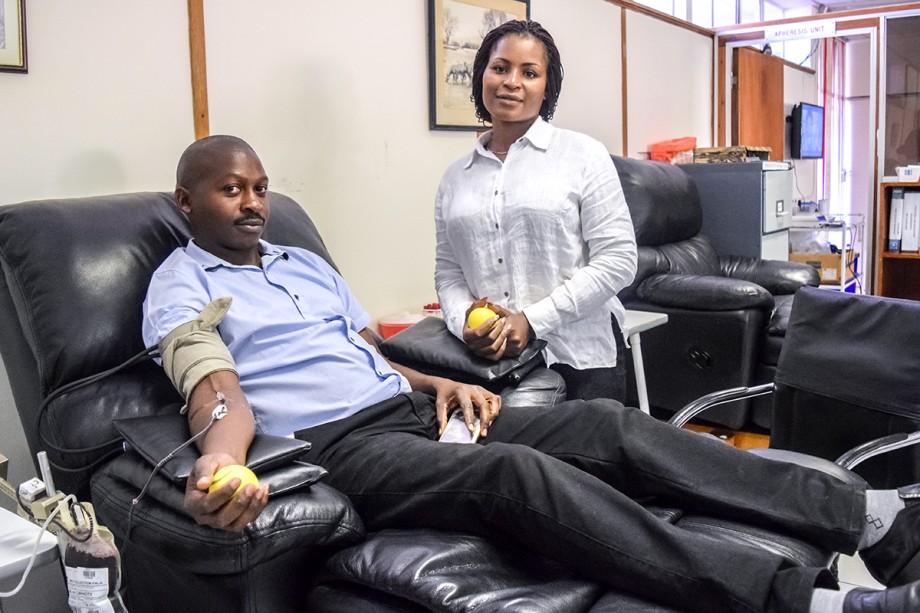 Victor Chinake donates blood in Harare, Zimbabwe. His wife, Primose Mudzudzu, stands by to support him.

But there’s no exception for someone who hasn’t donated regularly, for any reason, even if that person is a young child or lives in a rural area where donation isn’t possible. And anyone who for health reasons has never donated blood is out of luck.

That’s in stark contrast to many neighboring countries, where sick people can get blood transfusions for free. (See more about the cost of blood in Africa here.) It’s an especially cruel policy for Zimbabweans, who are enduring a severe economic crisis. Unemployment is high, poverty is endemic and cash is extremely scarce.

Chinake says he donates blood not because he’s trying to ensure that he’ll get a free transfusion, but because he wants to help someone who might need it.

The truth is that, in Zimbabwe, the person who might need Chinake’s blood might not be able to afford it. Very few Zimbabweans can, says Dr. Alois Muzvaba, secretary-general of the Zimbabwe Hospital Doctors Association and a doctor at Kadoma General Hospital in Kadoma, a city about 140 kilometers (87 miles) west of the capital Harare.

A patient who needs a blood transfusion is usually asked first whether he or she can afford it, Muzvaba says. Hospitals outside of the Harare area struggle to keep blood in stock, even though officials in the capital say there’s plenty to be had. The blood that is available is kept under lock and key.

For a lot of people now, if you need blood and you don’t have money, it means death.Martha Tholanah

“Sometimes you have three patients who need blood, but it will not be available,” he says.

Some patients can make do with iron supplements, he says. In some rare cases, small children and adults ages 65 and older are given blood on credit.

Government health officials say they do not have data to estimate the number of people who have died due to the high cost of blood.

Esther Massundah, public-affairs manager of National Blood Service Zimbabwe, says there is enough blood in banks to serve the needs of people in Zimbabwe.

For example, she says, the service collected 64,890 units of blood in 2016, barely missing its target of 65,000 units. Much of the donated blood comes from schoolchildren, who are compensated with a small biscuit, cookie or a soda.

Blood is only stored for 42 days, she says, so the service works to collect only what’s needed. But there is always plenty, she adds. 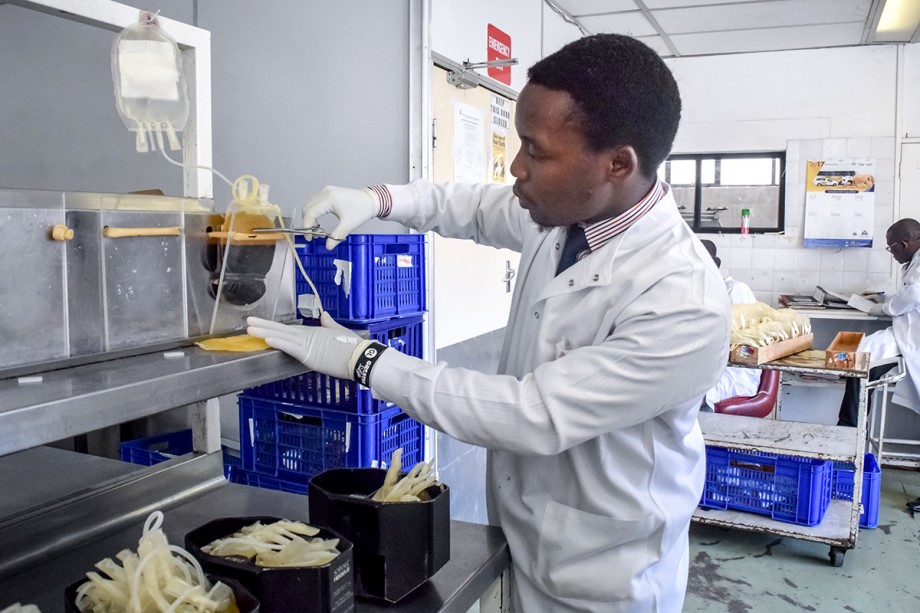 It’s even possible for someone to walk into a National Blood Service office and buy it directly, she says. Another option, reserved for people who need it most, is to take the blood on credit and deal with payment later, she says. But in every case, someone must pay to cover the blood service’s costs to collect, test, store and distribute the blood, she says. The blood service does not make any money from those sales, she adds.

For most Zimbabweans, the cost of blood is just too expensive.

That cost decrease, which occurred mid-2016, left the blood service with a surplus 44 percent smaller than it had the previous year, according to the service’s 2016 annual report. The goal, the report notes, was to make blood more affordable for patients.

Dr. Gerald Gwinji, permanent secretary for the Ministry of Health and Child Care, says people who can’t afford to buy the blood they need should get it, and social services should be billed. But that doesn’t happen, he says.

“They are facing the very same budgeting and funding challenges that all ministries are facing,” he says. “So we have not been getting any reprieve from them.”

Until that reprieve happens, patients who know in advance about potential medical needs do what they can to prepare.

In 2014, Martha Tholanah bought four pints of blood at $200 each in advance of a planned hysterectomy. If she hadn’t bought the blood, she says, the surgery would have been canceled. It was a financial strain, but she came up with the money.

“For a lot of people now, if you need blood and you don’t have money, it means death,” she says.