Skip to main content
The story you are reading was published on Tuesday September 26, 2017. To read more recent stories click here. 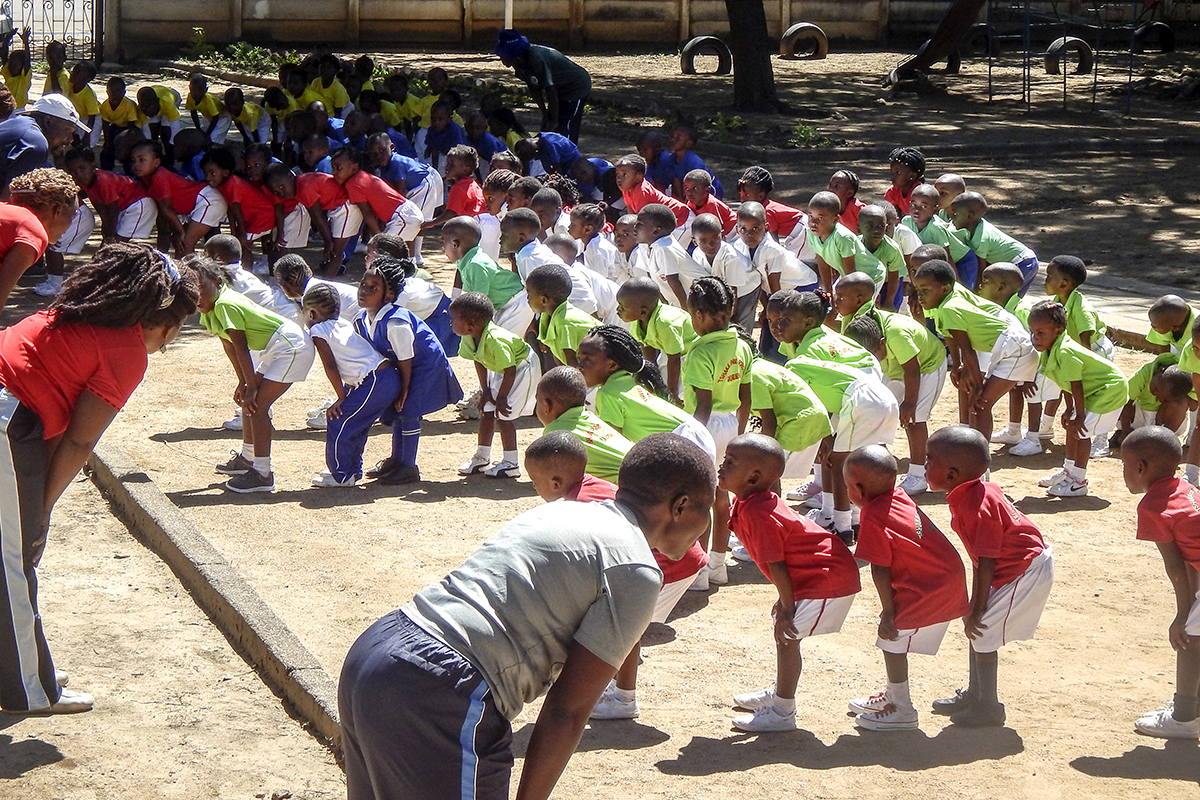 They form two circles and then stretch their hands high above their heads and then to their sides. After stretching, they get into another formation, this time to form their school’s name, Tshaka.

The 2017 school year marks the first time that students are participating in this new, weekly class: physical education and mass display. This new subject includes sports, parade formations and gymnastics, and it will be given the same priority as mathematics and English in Zimbabwe’s new curriculum. Some students praise the new classes, but many educators have lambasted the ministry for failing to train teachers and provide materials such as syllabi.

The new, nationwide curriculum, implemented by the Ministry of Primary and Secondary Education, has also lengthened the school day for primary- and secondary-school students. Students in first through fifth grades, who used to go to school from 7:30 a.m. until 1 p.m., now stay until 4 p.m., as do older students.

Through the new curriculum, the ministry aims to build well-roundedness, critical thinking and entrepreneurial mindsets, all with a very concrete outcome: decreasing the high unemployment rate plaguing the country.

Just 15 percent of people under 25 are employed in Africa, according to a 2017 African Economic Outlook study.

The high jobless rate persists partly because 77 percent of students fail the O level, the exam taken after 10th grade, according to the ministry. The focus on youth unemployment reflects an acute crisis common to many African nations. Just 15 percent of people under 25 are employed in Africa, according to a 2017 African Economic Outlook study.

More than 94 percent of all Zimbabweans work in the informal sector, according to the Zimbabwe National Statistics Agency. Most them learn trade skills on the job rather than in the classroom. The top employers of recent graduates are agriculture, trade and manufacturing.

“The new practical subjects are exciting, and woodwork is my favorite subject,” he says.

While some students are enthusiastic about the new subjects, teachers have been critical of the way the curriculum was implemented, saying there are limited teaching materials available for the new subjects.

Many say they feel unprepared to teach the new, required courses. Teachers across the country, backed by one of Zimbabwe’s major teachers’ unions, are criticizing the government for rushing to implement the new curriculum without adequate preparation.

Takavafira Zhou, president of the Progressive Teachers’ Union of Zimbabwe (PTUZ), said in a statement that the introduction of the new curriculum was premature due to the unavailability of syllabi and teaching materials in schools. The PTUZ is one of the country’s largest teachers’ unions, representing more than 15,000 teachers and lecturers in state and private schools and colleges.

“This is a first in so many years in Zimbabwe that the government staff is developing teachers in a systematic and determined way,” he says. “We have also seen that the syllabus has been made available in the schools.”

Earlier this year, the ministry hosted a training for some 72,000 primary and secondary school teachers, with financial and technical support from UNICEF Zimbabwe.

Most teachers that I have interacted with are facing problems in trying to implement the new curriculumFainos Magena, a philosophy and ethics lecturer at the University of Zimbabwe

Pharaoh Joseph Mavhunga, an education specialist at UNICEF Zimbabwe, says the training sessions included information on how to interpret the new syllabi and lesson-planning tips for the new curriculum.

“It’s not enough to just get the kids into school, but it is also about the quality of what they access,” Mavhunga says.

There are approximately 128,000 teachers left to be trained, though roughly 45,000 secondary-school teachers are currently undergoing training on how to implement the curriculum, he says. Another training program is planned for October, he added.

Fainos Magena, a philosophy and ethics lecturer at the University of Zimbabwe, says curriculum development is a complex process that requires energy and resources.

Magena says the vision for the country’s new curriculum is brilliant, but the government’s failure to provide enough materials to teachers and its implementation of the curriculum has already caused problems.

“Most teachers that I have interacted with are facing problems in trying to implement the new curriculum, because they are not well-equipped in terms of both cognitive and material skills,” he says.

The government should have delayed the new curriculum until next year, Magena says.

“There was a need for wider consultations in terms of who is going to teach the new subjects and who is going to produce the material,” he says. “The ideal thing would have been to delay the process a bit, hold a lot of workshops with teachers – trying to guide them and give them the necessary skills to deliver. And it would also allow new material to be produced for the new subjects.”

But Boithatelo Mguni, provincial education director for Matabeleland North, disagrees. She says the new curriculum is a positive development, adding that the new structure will allow for consistent assessment of students, rather than just cramming before state exams.

“The continuous assessment of the child gives the teacher an idea of the child’s strength and weaknesses in the new subjects, which are skill-based,” Mguni says. “The emphasis in the new curriculum should be on the transition profile of the child from one grade to the next and monitor how much the child has grasped in the previous grade.”

Miranda Mashingaidze, a mother of daughters in grades two and four, says her daughters seem to be adjusting well to the new curriculum. But she worries that the new subjects and longer school hours will be challenging.

“Our children are growing up in a different environment. They now knock off at 4 p.m., instead of the usual 1 p.m. On the other hand, our economy requires this extra skills training,” she says.

A third-grade teacher at a Bulawayo school, who requested anonymity for fear of losing her job for speaking to the press, agrees that the new time commitment is a lot for younger children.

“The new time modification for the children is too much, because their concentration levels diminish as the day progresses,” she says, adding that at her school teachers did not have relevant information to teach the new subjects.

Desmond Ntini, a father of two boys, says the practical focus of the new curriculum is a welcome change.

“Considering the way the economy has transformed, there is a need for children to have extra skills in addition to the usual academics,” he says.

A high-school teacher in a rural school, who also requested anonymity for fear of reprisal, said students have adapted well to the new curriculum, but teachers would have benefited from more time and training to understand the material before putting the new curriculum into effect. One missing consideration, she says, was the special-needs student.

“There is a lot that needs to be done for teachers who teach children with special needs, and the curriculum has to be adjusted to suit their needs,” she says. “We are confused in terms of what we are supposed to do as teachers for children with special needs. How do we teach mass display to children living with disabilities who cannot stand for a long time – or stand at all?”

Mguni, the provincial education director, dismisses the concerns, saying she has faith in Zimbabwe’s teachers.

“Our teachers are already trained professionals; they just need to adapt to the new curriculum subjects,” she says. “There is a need for teachers to be innovative and creative about how they will teach the new subjects. They just need exposure to the application of concepts, and they need to think outside the box.”

The reporter is not related to any sources in this story.