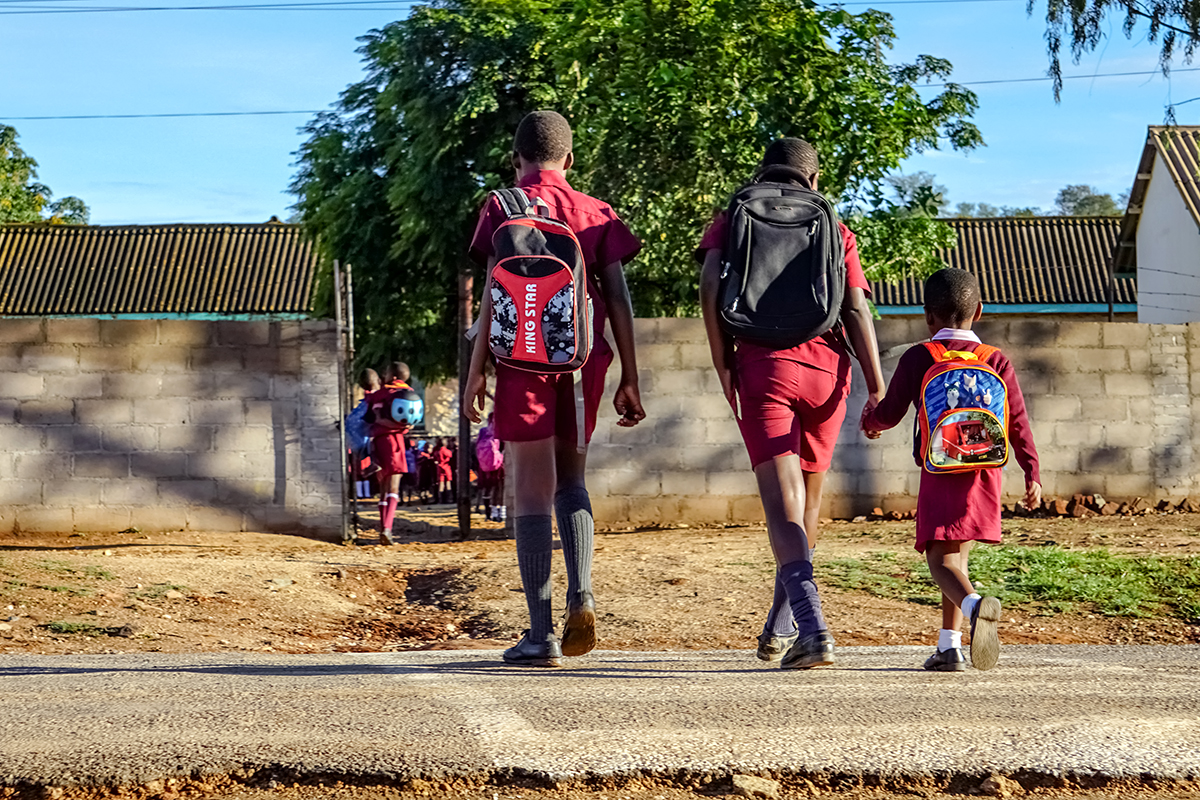 That memory is among the strongest that Florence Jiri, 60, has of her career as a primary-school teacher. She started teaching first grade in 1983, three years after former President Robert Mugabe took power in Zimbabwe and announced that free, public education would be among his key priorities.

Those were the heady days for teachers and students. After decades of colonial rule, during which black Zimbabweans were largely barred from quality formal education, the new government rapidly increased the education budget, built new schools and launched teacher training to fill thousands of openings. School was declared free of charge for every student.

Education was no longer a privilege mostly reserved for white students, but an inalienable right guaranteed to every child. It was a world apart from the schools of Zimbabwe’s colonial era, in which 1 percent of the population – those of European descent – consumed 10 times more of the nation’s education budget than did the other 99 percent, who were black Zimbabweans.

“Students were put on the same level,” Jiri says. “They could study till university without restriction. It was dependent on a person and whether they wanted to study further or not.”

But in time, the flow of educational advancement was matched by an ebb, marked by ill-equipped teachers, crumbling schools and fee requirements that made a child’s education, while technically free, unaffordable for many families. 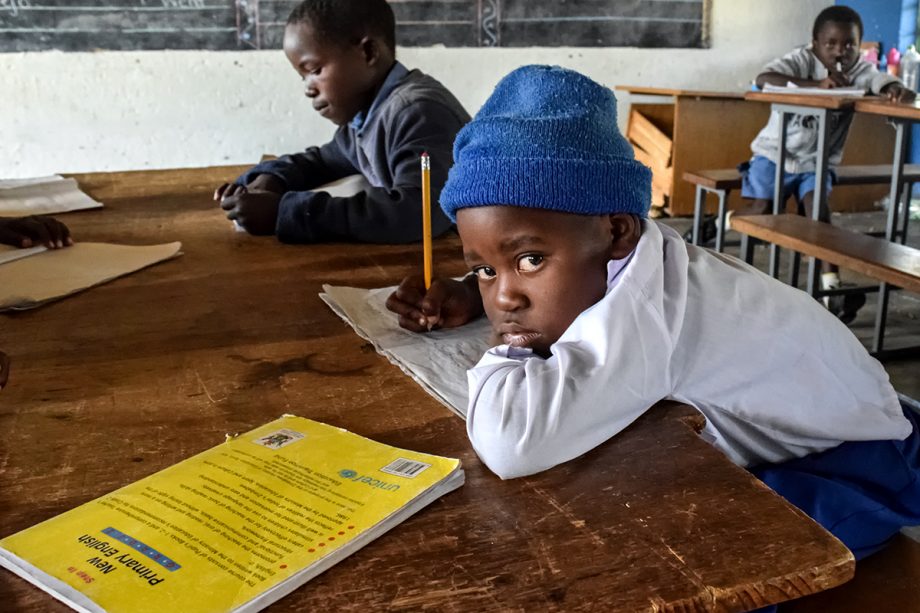 A student works at his desk in a school in Goromonzi, Zimbabwe. Schools in Zimbabwe are chronically underfunded and sometimes do not have enough teachers to manage all the classrooms.

Now, despite once boasting schools that produced results among the finest in Africa, Zimbabwe has an educational system that is unpredictable at best. At worst, only a tiny fraction of students passes standardized tests at the end of secondary school.

In a few cases, schools report that no students have passed at all.

The decline has been years in the making, but many teachers and education specialists see the Mugabe era – which began in 1980 and ended in November, when he was pushed from the presidency – as both a guidebook for investing in disadvantaged students and a cautionary tale about how a government can destroy a school system.

“It was no exaggeration that Zimbabwe by 2005 had attained 97-percent literacy and made us number one in all of Africa,” says Aeneas Chigwedere, who was minister of primary and secondary education between 2001 and 2009.

In qualitative terms, however, there was an undeniable downward trend, he says.

“Any education system that fails 50 percent of its candidates is a failure,” Chigwedere says, referring to the skyrocketing failure rates on the country’s standardized tests.

It was no exaggeration that Zimbabwe by 2005 had attained 97 percent literacy and made us number one in all of Africa.Aeneas Chigwedere, minister of primary and secondary education between 2001 and 2009

Many of the people who led Zimbabwe’s education-reform efforts say the government was prudent with its education budget, even as it sought to immediately implement sweeping reforms.

But it’s difficult to determine exactly how much money the country spent on education, and whether it really was as large a percentage of the total national budget as many of those former officials say.

According to United Nations data, Zimbabwe spent 2.5 percent of its GDP on education in 1980. By 1985, it spent 7.4 percent, and by 1990 it was 12.5 percent – a far greater share than most other countries and nearly double the rate of the Polynesian nation of Tuvalu, which was second highest among countries with data reported in 1990.

That money, by all accounts, paid for a complete overhaul of the education system.

For generations, the national curriculum had been designed in two versions: one for white students and a second, inferior version for black students. But under Mugabe, it was redesigned as a single curriculum for all students.

To get teachers more quickly into classrooms, a teacher-training program that began in 1981 offered on-the-job instruction combined with distance education and shorter periods in a conventional university program. In a handful of years, the program helped boost the number of trained primary-school teachers by more than 11,000. 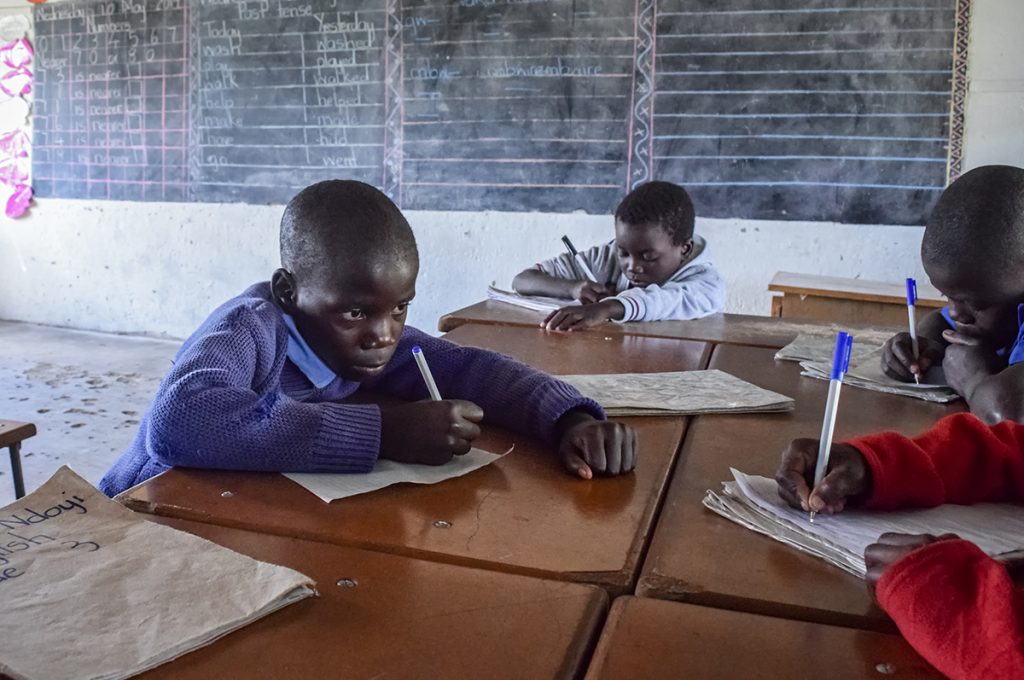 Elementary school students in Goromonzi, Zimbabwe, complete their work. Rural schools, such as the one pictured here, suffer from a lack of basic supplies more often than do their urban counterparts. 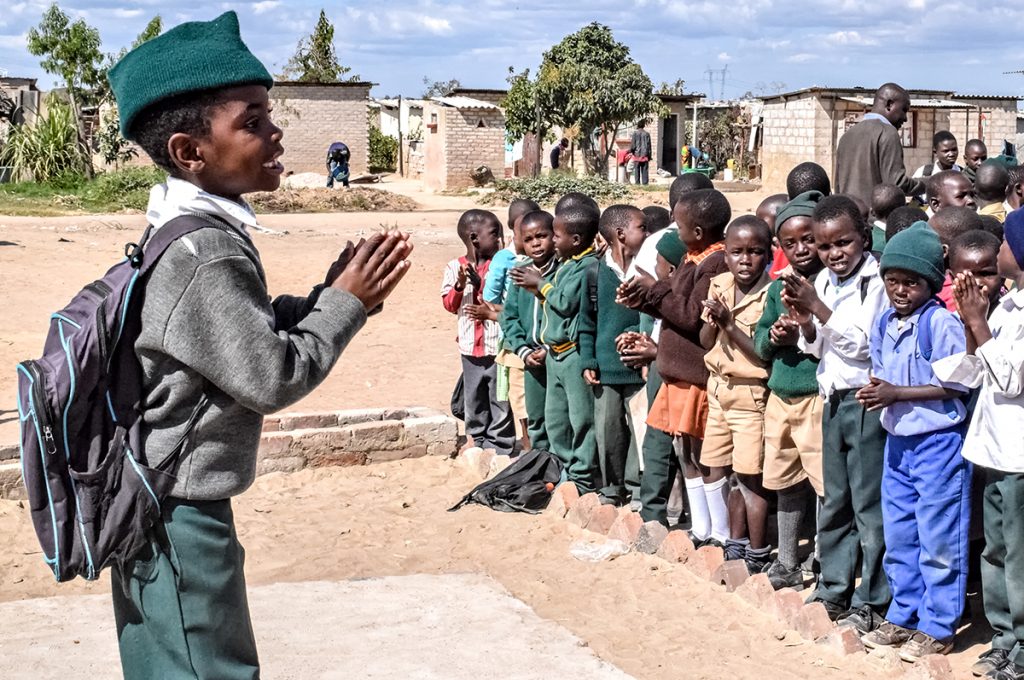 A hallmark of Zimbabwe’s education system is free public schooling, but schools are allowed to charge fees, which make even the humblest schooling options unaffordable for many families. Students at Shining Star Association in Harare, Zimbabwe, pictured here, go to school free of charge. 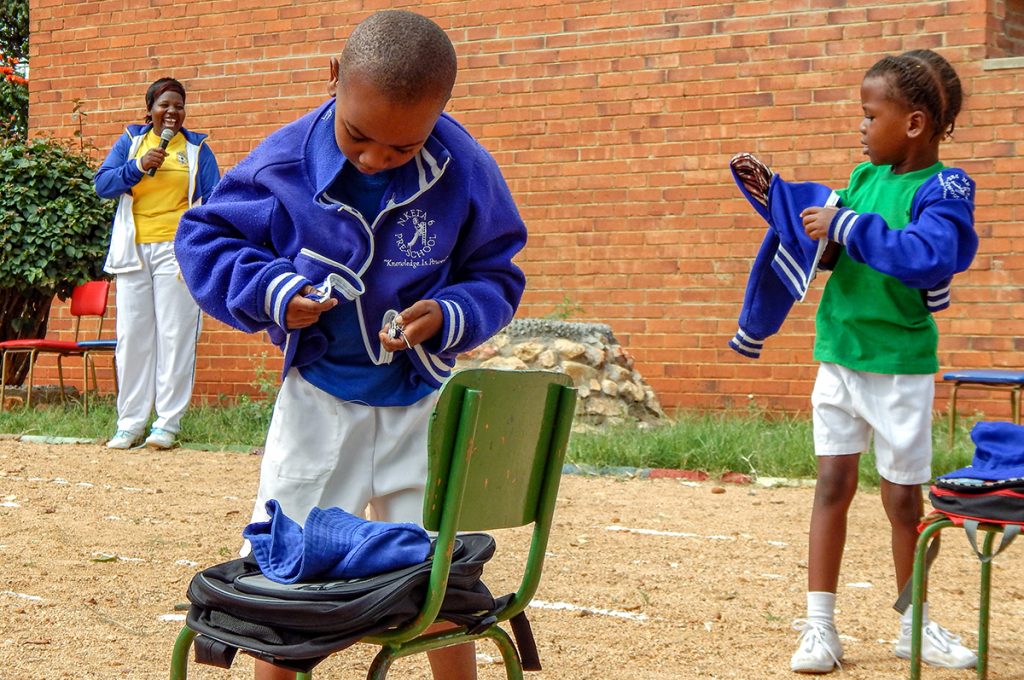 Children at a preschool in Bulawayo, Zimbabwe participate in a sports course during an end-of-term sports day. 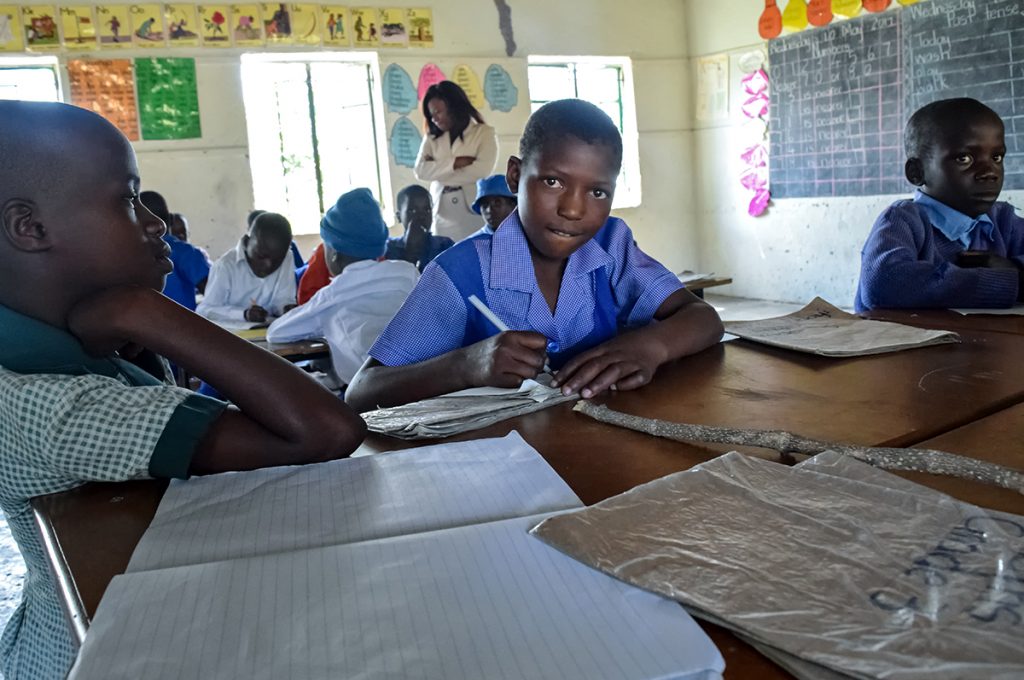 Children in grades 2 and 3 sit in their classroom in Goromonzi, a rural town east of Harare, Zimbabwe’s capital. It’s common to find children of more than one grade in a single classroom in Zimbabwe, because of shortages of space and teachers. 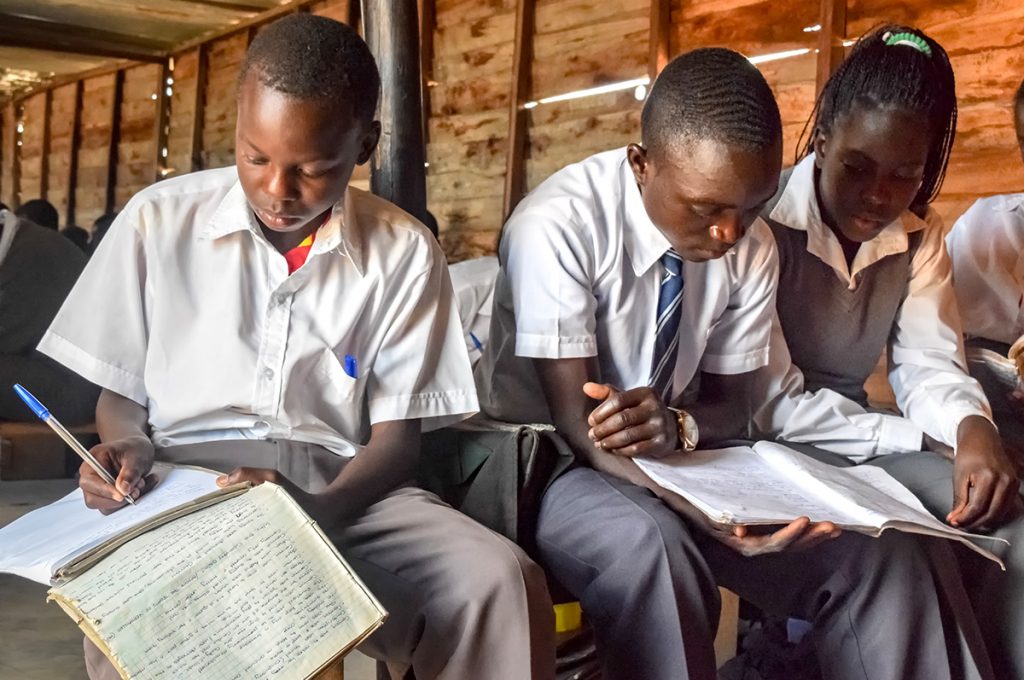 Many schools in Zimbabwe lack desks or other basic supplies. Here, students study at a Shining Star Association facility in Harare, Zimbabwe. 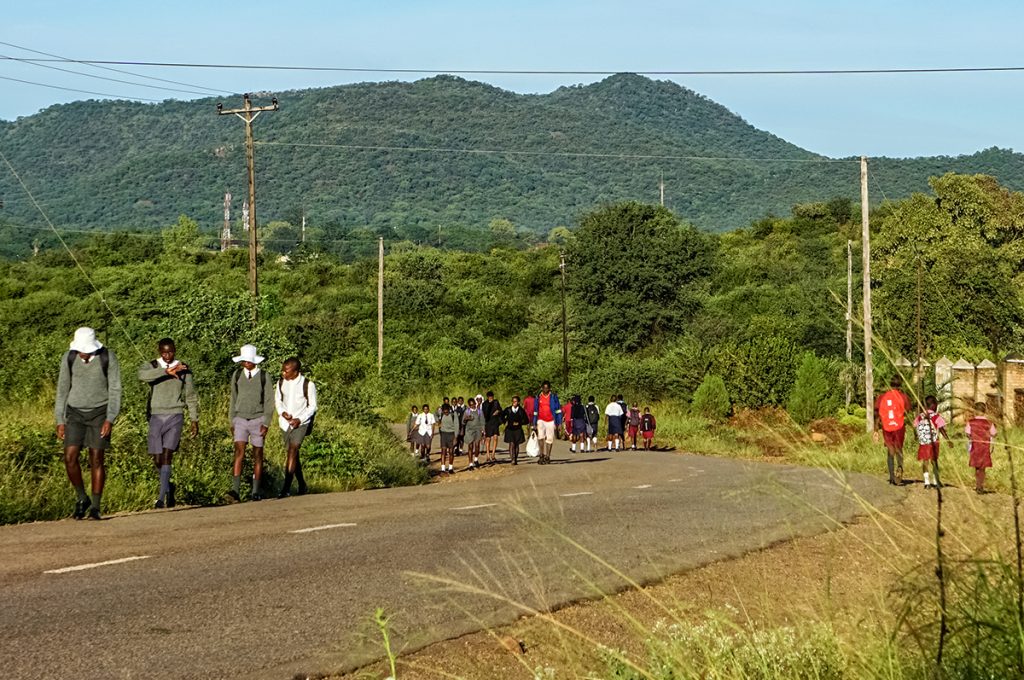 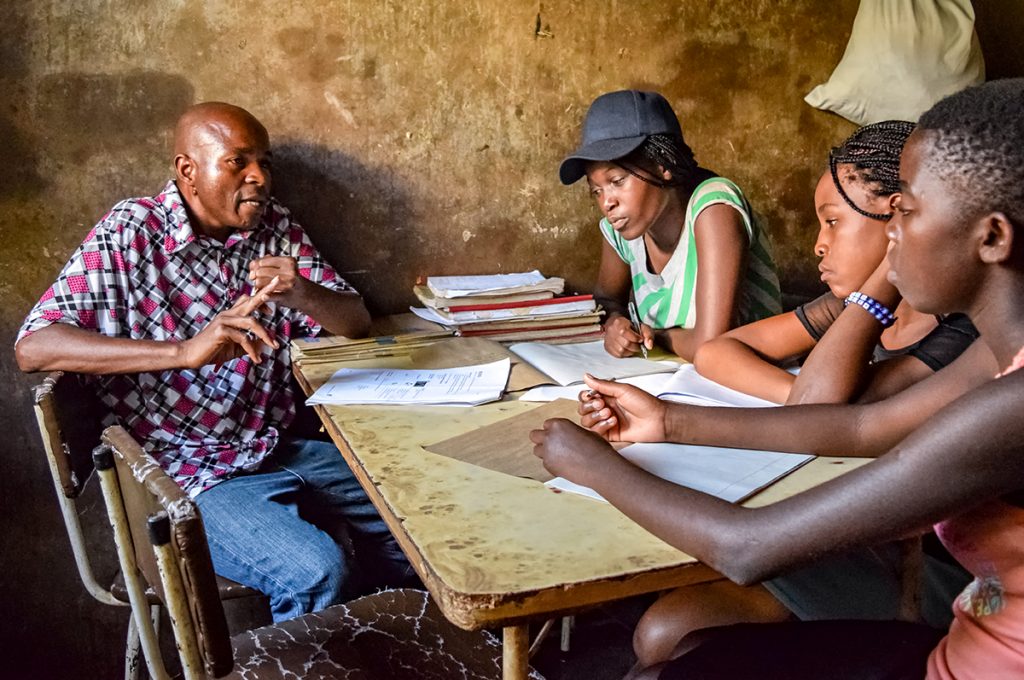 Wisdom Matereke teaches students extra lessons in his home in Harare, Zimbabwe. He charges $15 per subject per month. It’s common for students to take extra lessons, in an effort to pass their exams. 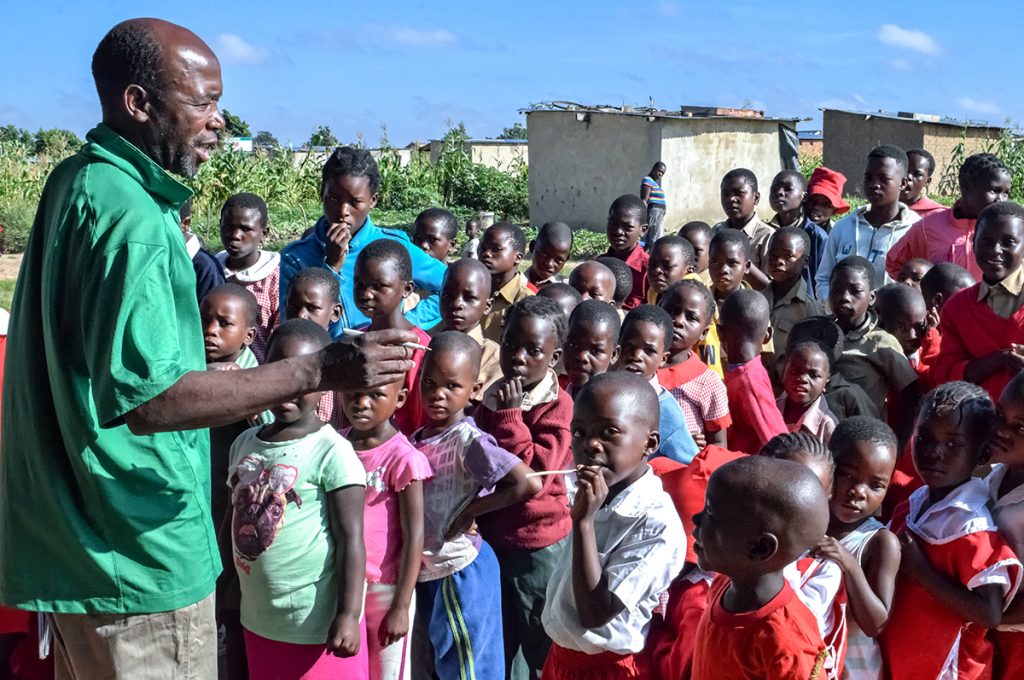 Children at a private school in the Hopley Farm area of Harare, Zimbabwe’s capital, listen to daily announcements. 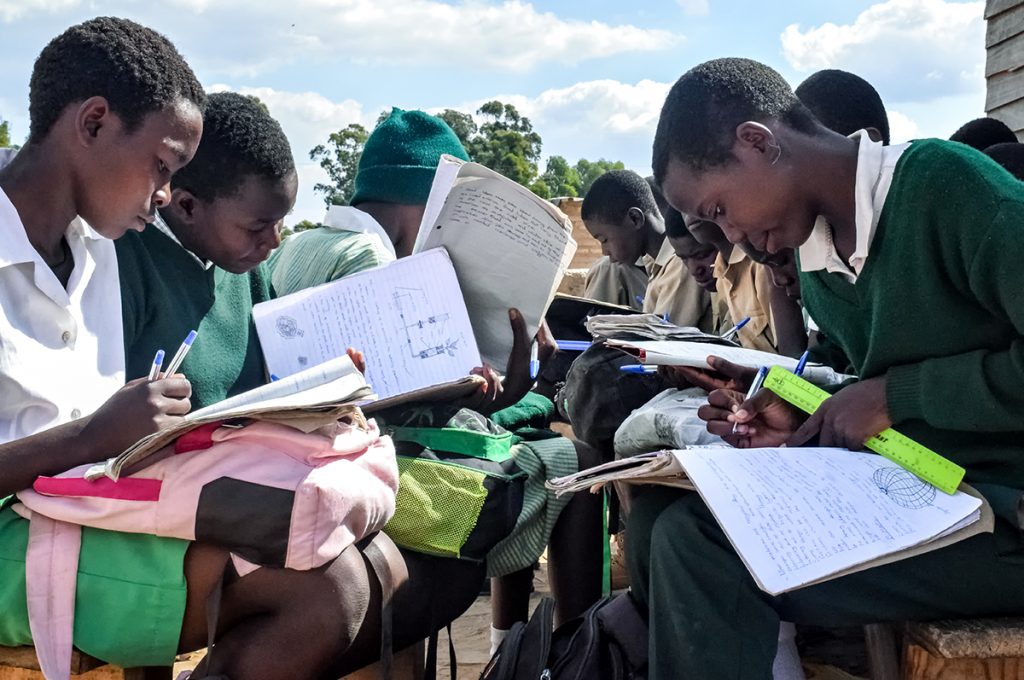 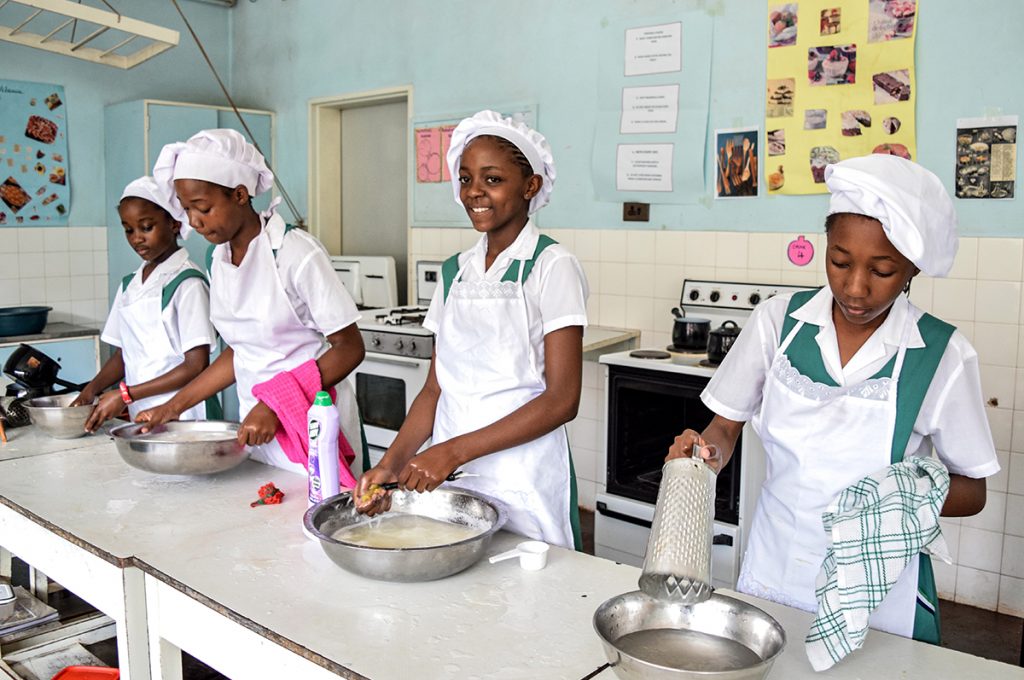 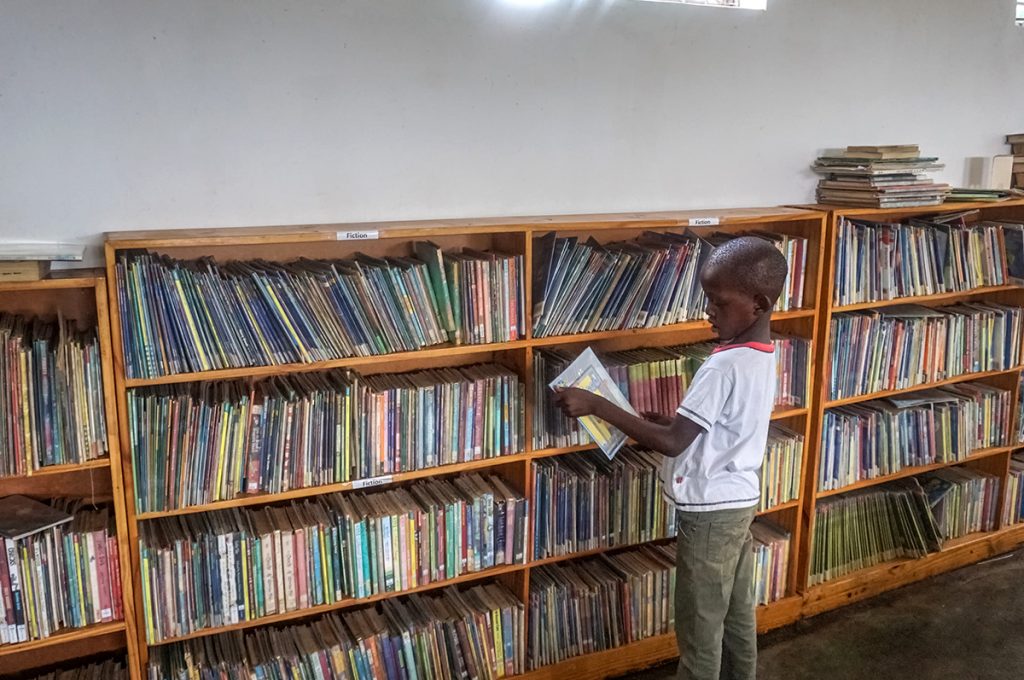 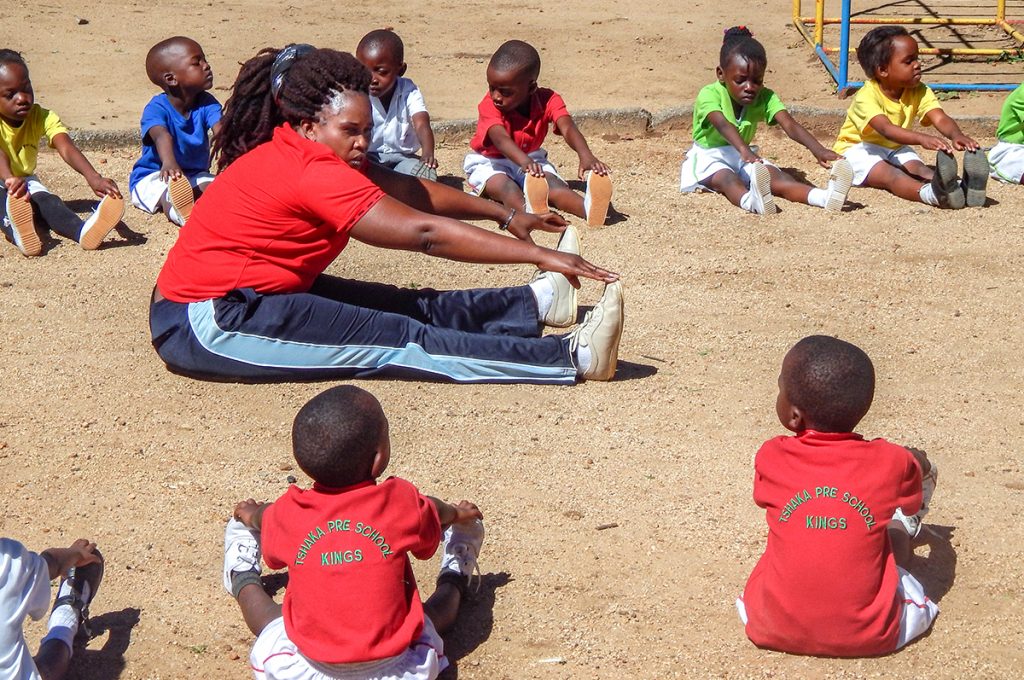 Preschoolers in Mzilikazi, a suburb of Bulawayo, Zimbabwe’s second-largest city, participate in a physical education class. Sports courses were added to Zimbabwe’s core curriculum in 2017. 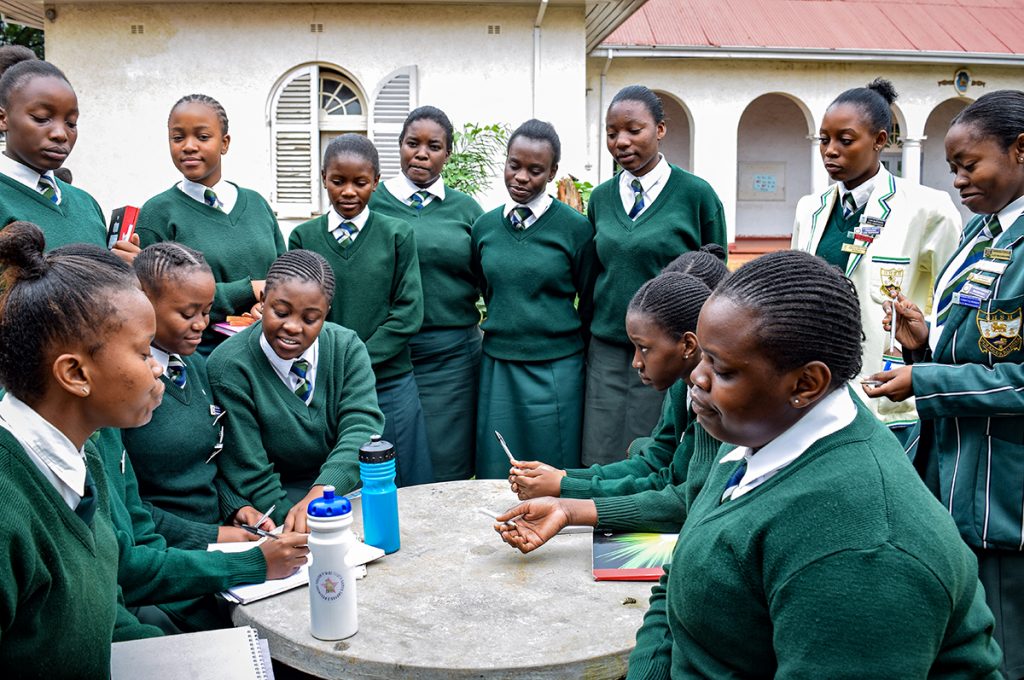 Students at Girls High School in Harare, Zimbabwe gather for their Interact Club. 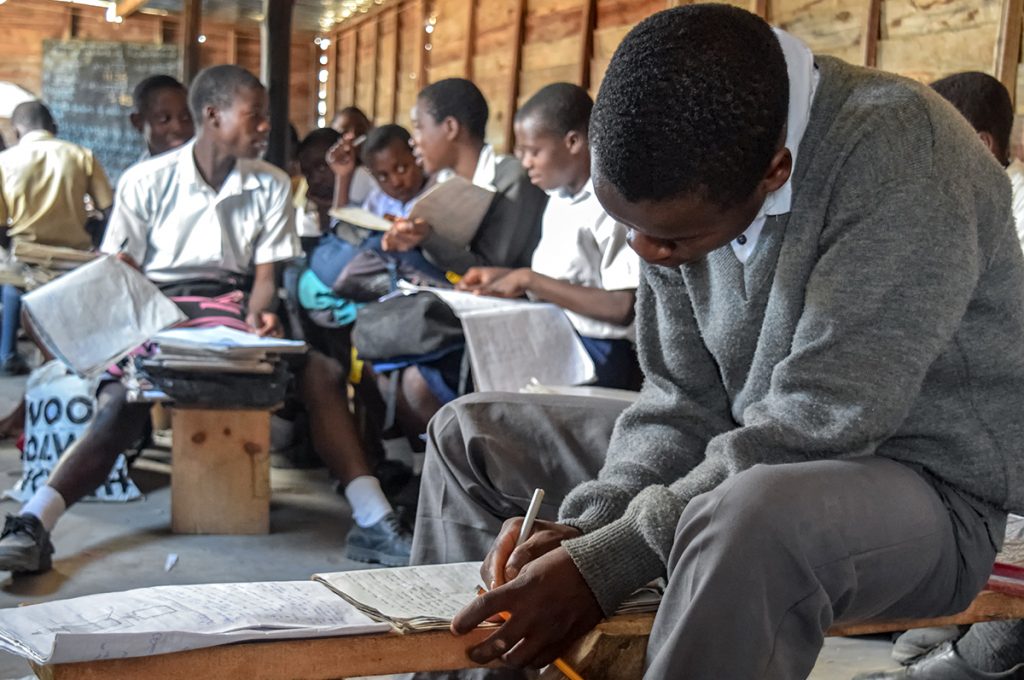 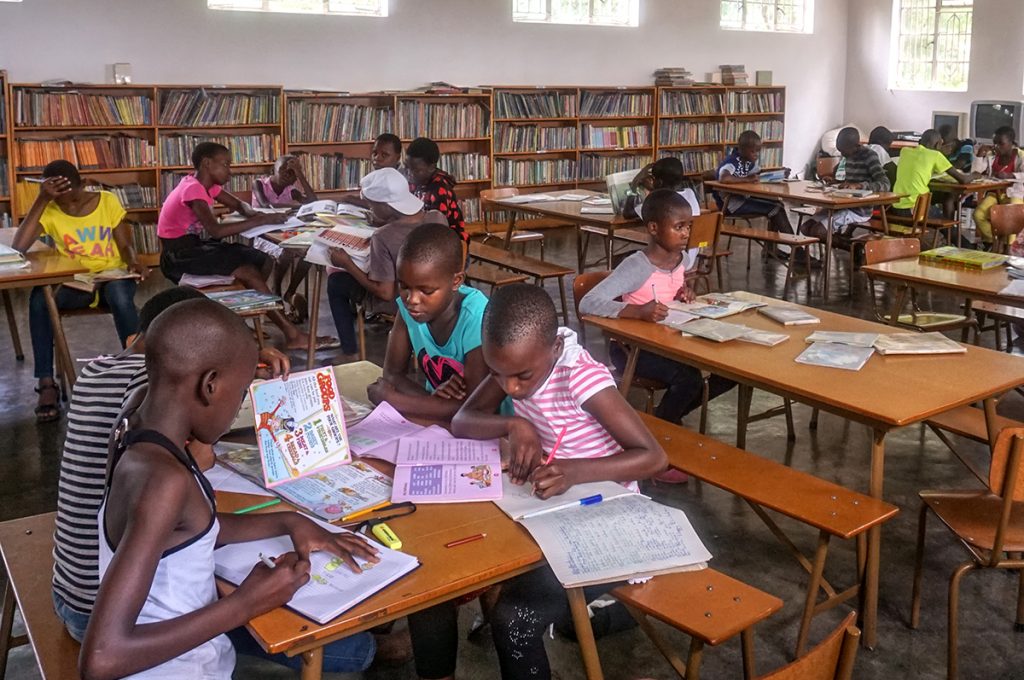 In addition, another program trained about 1,500 Zimbabwean math and science teachers in Cuba between 1986 and 1995, after which the program was conducted in Zimbabwe.

At the same time, Zimbabwe was receiving huge sums of money in international aid. Through the 1990s, the World Bank alone lent the country more than $1 billion. The bank’s strategy was to lend money for use in a range of sectors, while also protecting the government’s education budget.

But the country was unable to achieve financial independence. By 2000, Zimbabwe was carrying a debt load of more than half its gross national product. Financial aid was cut off.

Sanctions and other restrictions soon followed, as European countries and the U.S. responded to human- rights abuses.

That was the final blow, says Fay Chung, who was Zimbabwe’s education minister between 1988 and 1993. The sanctions unraveled all the good work that Zimbabwe had done in its education sector up until that point.

“It undid all the good,” she says.

The sanctions were a sharp end to an optimistic era, but other experts disagree with Chung, saying the problems the sanctions highlighted what had been in the making for years.

The system was seriously strained by Mugabe’s commitment to immediately begin educating every Zimbabwean seriously strained the system, says Caiphus Nziramasanga, who was commissioned in the late 1990s by the president to lead an inquiry into the education sector’s problems.

There were too many students per teacher, Nziramasanga says. Schools didn’t have the resources they needed. In some cases, schools closed entirely.

“By 1996, it was evident: The bad effects of the ‘Education for All’ were seen,” he says. “There was need to reform [the] financing system of education, the development of the schools and the teacher education programs.”

Nziramasanga was tasked in 1998 with examining the education system and proposing fixes. He and other experts formed what is known as the Nziramasanga Commission and in 1999 recommended sweeping changes, including the scrapping of certain standardized tests.

Those recommendations were never implemented, because of a lack of political will, Nziramasanga says.

Meanwhile, a host of other social and economic problems made regular school attendance unlikely or impossible for many students. The government, in a massive effort to clear away illegal settlements, vending stalls and other structures, destroyed vast neighborhoods in a fast-paced, military-like effort known as Operation Murambatsvina. An estimated 700,000 people lost their homes or livelihoods.

As a result of Operation Murambatsvina, children dropped out of school in almost a quarter of the households in Harare, according to research by ActionAid, an anti-poverty organization. Even more – 45 percent of households – reported concern about finding money to pay school fees or finding schools for their children to attend. 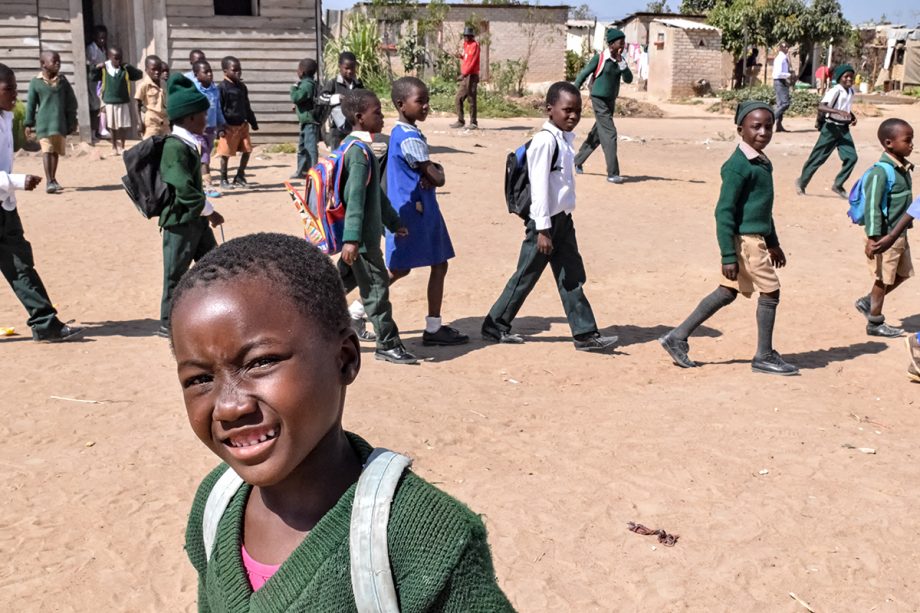 Students at Shining Star Association’s educational facility in Caledonia, a settlement in Harare, Zimbabwe, walk to class. The association offers free education for children who cannot afford the fees or tuition charged at other schools.

Human-rights violations spread throughout the country as Mugabe’s administration sought to control the media, clamp down on political opposition and guarantee election wins. Public beatings and disappearances, meted out by people loyal to Mugabe’s ZANU-PF party, were paired with “re-education” meetings to force support for Mugabe.

White Zimbabweans who owned fertile farmland were systematically and often violently evicted. The land was, in most cases, turned over to people who knew little about agriculture. The country tumbled into a food shortage.

The economy collapsed. The value of Zimbabwean cash plummeted. Unemployment, according to some estimates, hit 95 percent. Across the country, even people with paying jobs couldn’t afford basic goods.

In 2010, Zimbabwe spent 2 percent of its GDP on education – far less than many other countries, and less than it spent in 1980.

“[Mugabe] is the one who pushed,” he says. “Even when donors were not willing to fund education, he emphasized that every Zimbabwean should be given an opportunity to go to school.”

In 2010, Zimbabwe spent 2 percent of its GDP on education – far less than many other countries, and less than it spent in 1980.

David Coltart, who served as minister of education between 2009 and 2013, agrees that Mugabe deserves some credit, but says serious errors were made.

The education ministry often didn’t receive all the money that had been budgeted for it, he says.

“It’s about posturing; it’s about rhetoric and convincing people that you are prioritizing education when you are not,” Coltart says.

Still, he is hopeful. The education sector was budgeted more than $900 million for the 2018 fiscal year.

That’s nearly 16 percent of the total budget – a share that brings to mind those heady days when Zimbabwe set out to revamp its education system.

If that money is really spent on education, Coltart says, it’s possible to turn the public school system around.

And even though Mugabe was forced from the presidency, the hope he inspired in his early days as Zimbabwe’s leader remains potent.

“He broke the bottleneck of an education that was restricted to a few,” Coltart says. “That legacy can’t be taken away from him.”